Kabuki syndrome (KS) is a rare disorder characterized by multiple congenital anomalies and variable intellectual disability caused by mutations in KMT2D/MLL2 and KDM6A/UTX, two interacting chromatin modifier responsible respectively for 56–75% and 5–8% of the cases. To date, three KS patients with mosaic KMT2D deletions in blood lymphocytes have been described. We report on three additional subjects displaying KMT2D gene mosaics including one in which a single nucleotide change results in a new frameshift mutation (p.L1199HfsX7), and two with already-known nonsense mutations (p.R4484X and p.R5021X). Consistent with previously published cases, mosaic KMT2D mutations may result in mild KS facial dysmorphisms and clinical and neurobehavioral features, suggesting that these characteristics could represent the handles for genetic testing of individuals with slight KS-like traits.
Keywords: kabuki syndrome; KMT2D/MLL2; mosaicism; developmental delay kabuki syndrome; KMT2D/MLL2; mosaicism; developmental delay

Kabuki syndrome (KS, MIM #147920) is a rare disorder characterized by a distinctive face, with long palpebral fissures and eversion of the lateral third of lower eyelids, short columella with broad and depressed nasal tip, prominent ears, and cleft or high-arched palate. Additional features include short stature, skeletal anomalies, congenital heart defects, renal malformations, anorectal anomalies, and abnormal dermatoglyphics [1,2].
Mutations in KMT2D have been identified as the main cause for KS [3], less frequent are mutations in KDM6A [4]. Since then, a number of studies have shown that mutations in KMT2D and KMD6A account for approximately 56–75% and 5–8% of KS cases, respectively [5].
To date, mosaic KMT2D mutations have been described in three KS patients [6]. Here we expand the number of mosaic KS patients by reporting three additional cases. Consistent with the published cases, mosaic KMT2D mutations are associated with classical KS facial dysmorphisms and clinical features, although some manifestations could be milder. KS is a multi-systemic disorder, not limited to a single organ or tissue of a common embryonic origin, and haploinsufficiency of KMT2D in just some cell types may be sufficient to produce deleterious phenotypic events.

To date, only three KS patients with mosaic KMT2D deletions have been reported, two with intragenic deletions and one with a whole gene deletion, while no case has been described with mosaic KDM6A point mutation [6]. Here, we describe three additional KS subjects with mosaic KTM2D mutations. The patients with mosaic mutations described by Banka disclosed no significant difference in clinical features and cognitive profiles, in respect to non-mosaic patients [6]. Consistently, two of the three mosaic cases reported here showed distinct KS clinical characteristics, including facial features, as opposed to the GM13-3816 patient, who showed the lowest percentage of mutated cells in leukocytes (Figure 1 and Table 1). Although genotype–phenotype correlations based on few known subjects are premature, it seems plausible that both the type of mutation and the proportion of mutated cells have a direct impact on clinical outcome. Notably, five of the six known patients displayed a stature in the high–normal range (>50th centile), suggesting that mosaic mutations could have a mild effect their stature.
The neurobehavioral evaluation of patient 1 showed a learning disability, impairment of adaptive skills and psychopathological findings, such as an anxiety disorder, multiple phobias, bizarre behaviour and emotional dysregulation. A similar behavioural profile was also found in patient KB369, who was the sole patient in our cohort presenting with intellectual disability and autistic-like behaviour. A recent study of the intellectual functioning in 31 children with KTM2D mutations, showed IQs ranging from normal to severe disability, with most of them presented with moderately impaired IQ and a mean TIQ of 57.4 [16]. Another study of nine additional patients disclosed a similar trend, with a better mean TIQ (67) [17]. In the present study, patients GM13-3816 and KB450 showed borderline intellectual functioning (TIQ 87 and 84), while the Banka et al. [6] cases and our patient KB369 presented an obvious mild to moderate developmental delay (Table 2). Interestingly, patients displayed a more severe delay resulting from the deletion of the entire KMT2D gene or mutations causing a premature truncation of KMT2D in the first-half of the protein, predicting a shorter protein lacking the majority of KMT2D functional domains, including WIN and FYRC/N protein–protein interaction domains and the SET catalytic domain, therefore hampering its enzymatic activity.
The clinical examination and neurobehavioral assessment of the few mosaic KS patients did not allow us to draw at present any firm genotype–phenotype correlation. Nevertheless, some distinct facial dysmorphisms overlapping those found in non-mosaic KS patients and mild developmental delays should suggest targeted genetic testing in these subjects.

Clinical investigations and genetic analyses were approved by the institutional scientific board of the institutes involved, and were conducted in accordance with the Helsinki Declaration. DNA from KB369 and KB450 samples were deposited in the Genomic and Genetic Disorders Biobank [18]. Informed consent was obtained from family members. All children underwent complete physical and dysmorphology evaluations by the referring clinical geneticists. The clinical features of patients are summarized in Table 1.
Genomic DNA was extracted using standard procedures. Mutational analysis was carried out for patient 1 by a customized TruSeq Custom Amplicon panel using MiSeq (Illumina, San Diego, CA, USA) and validated with Sanger Sequencing. Sanger Sequencing was used to screen patient 2 and 3 as reported in [12]. PCR product was pyrosequenced twice on a PyroMark Q24 using Pyromark PCR Kit according to the manufacturer’s instructions (Qiagen, Hilden, Germany).

KS is a multi-systemic disorder not limited to a single organ or tissue of a common embryonic origin. The present data suggesting that the haploinsufficiency of KMT2D is limited to some cell types may be sufficient to recapitulate the associated phenotype. It is conceivable that screening of a larger cohort will likely identify additional cases of mosaic KS, which is so far underdiagnosed. We are persuaded that the targeted next-generation sequencing panel is the more appropriate technique for analysing this condition, since a single experiment allows full sequencing of the disease genes and the detection of somatic events, often overlooked by Sanger sequencing.

We are grateful to the Genomic and Genetic Disorders Biobank, Telethon Network of Genetic Biobanks (Telethon Italy grant GTB12001G), and of the EuroBioBank network for biospecimens banking. The financial support of Telethon—Italy (Grant No. GGP13231), Italian Ministry of Health, Jérôme Lejeune Foundation, and Daunia Plast to GM is gratefully acknowledged. 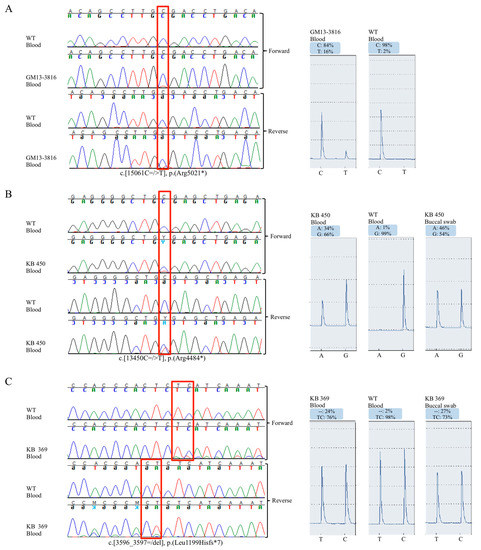 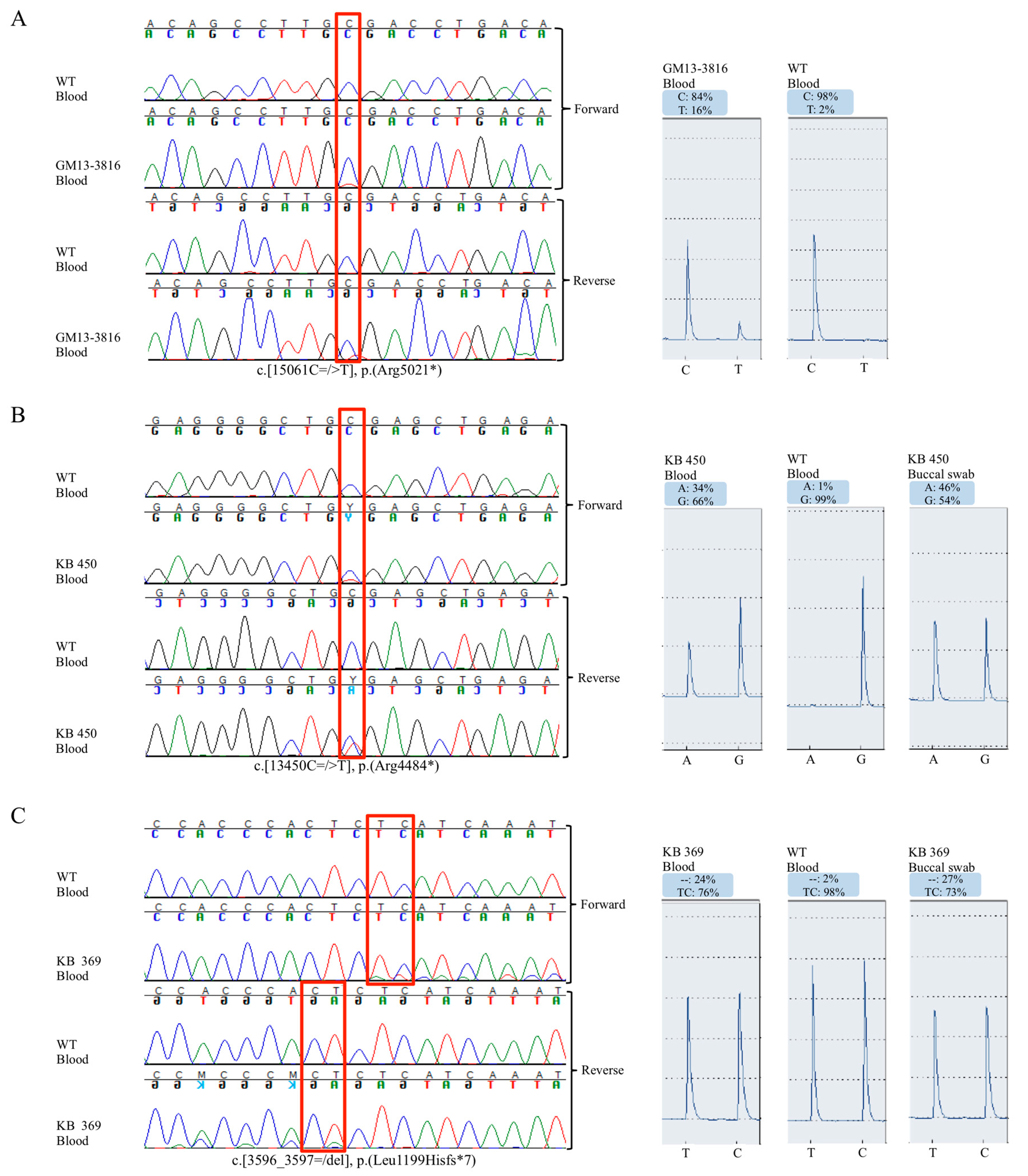