Transcriptional Regulation by CpG Sites Methylation in the Core Promoter Region of the Bovine SIX1 Gene: Roles of Histone H4 and E2F2
Previous Article in Journal

Diabetes mellitus (DM) is one of the fastest growing chronic diseases and is caused by a deficiency in insulin secretion or by ineffectiveness in insulin action [1]. Dysfunction of insulin requirements is involved in the derangement of carbohydrate, protein, and lipid metabolism, leading to numerous complications, such as hyperlipidemia, coronary artery disease, renal failure, neuropathy, retinopathy, and blindness [1,2]. More than 95% of diabetic patients have type 2 DM (T2DM), causing hyperglycemia via an ineffectiveness of insulin action or an inability to mount a normal response to insulin in peripheral cells, resulting in the symptoms of insulin resistance [3,4]. Fructose can cause hypertriglyceridemia, low density lipoprotein-cholesterol (LDL-C), weight gain, blood pressure elevation, and impaired glucose tolerance [5]. Long-term fructose intake may enhance oxidative stress, impair the antioxidant system, and increase lipid peroxidation [6,7]. It can also be associated with the pathogenesis of metabolic syndrome, including insulin resistance, abdominal obesity, dyslipidemia, intraabdominal fat accumulation, fatty liver, inflammation, and endothelial dysfunction, resulting in T2DM ultimately [5]. High-fructose diet (HFD)-induced diabetic rats are widely used as an in vivo model to investigate the mechanism of therapy for T2DM-associated insulin resistance [8].
Phenolic compounds are widely distributed in the plant kingdom. Plant-derived polyphenol compounds exhibit various pharmacological properties, which has been the subject of considerable interest in recent research [4]. Gallic acid (GA), an endogenous polyphenol in plants, is abundant in vegetables, grapes, berries, tea, fruit juices, and wine [1]. GA consists of one aromatic ring, three hydroxyl groups, and one carboxylic acid group. GA exhibits the strong antioxidant capacity due to the fact that three hydroxyl groups are linked to the aromatic ring in the ortho position. GA has been reported to exhibit pharmacological activities, including antioxidant, anti-obesity, anti-inflammatory, antimutagenic, and anticancer activity [9,10]. Moreover, GA exhibits antihyperglycemic, anti-lipid peroxidative, and antioxidant activities in streptozotocin (STZ)-induced diabetic rats [11]. In these rats, the oral treatment with GA resulted in a significant decrease in the levels of blood glucose, hepatic lipid peroxidation products, glycoprotein components, lipids and the activity of hydroxymethylglutaryl-CoA reductase, and a significant increase in levels of plasma insulin and liver glycogen [11].
An HFD-induced diabetic rat model has been reported to present the pathophysiological properties of T2DM in humans such as insulin resistance, glucose intolerance, dyslipidemia, renal impairment, and hypertension [12]. High fructose intake is linked to the prevalence of hyperglycemia, hypertriglyceridemia, obesity, and other metabolic syndromes [8]. Very few studies have examined the effect of GA on fat accumulation in adipose tissues of diabetes. The perirenal adipose tissue is the relatively large size in the intra-abdominal cavity and facilitates to cause a mass increase when compared with other adipose tissue [13]. The aim of the present study is to investigate the effect of GA on hypertriglyceridemia and fat accumulation in perirenal adipose tissues of HFD-induced diabetic rats.

2.1. Effect of GA on Weight of Perirenal and Epidydimal Adipose Tissues in HFD-Induced Diabetic Rats

2.2. Effect of GA on Insulin Signal Transduction in the Perirenal Fat of HFD Rats

2.3. Effect of GA on Carbohydrate Metabolism and Lipid Metabolism in the Perirenal Fat of HFD Rats

Male Wistar rats (6 weeks old) were obtained from the National Laboratory Animal Center, Taipei, Taiwan. The room conditions and treatment procedures were in accordance with the National Institutes of Health Guide for the Care and Use of Laboratory Animal. All of the protocols were approved by the Institutional Animal Care and Use Committee of National Taiwan Normal University, Taipei, Taiwan (approval No. 103042, 23 December 2014). The rats were maintained under standard laboratory conditions of temperature 25 °C ± 1 °C and a 12-h light/12-h dark cycle with free access to food and water for the duration of the study. Wistar rats were fed a normal diet for two weeks and divided into five groups of six rats each. Group 1 was fed a normal diet for eight weeks. Group 2 was fed HFD throughout the experiment as a negative control. Group 3 received HFD for 8 weeks and was gavaged with pioglitazone (30 mg/kg) daily for the last four weeks as the positive control. Groups 4 and 5 were fed HFD (66% fructose in diet) for 8 weeks and gavaged with GA (10 or 30 mg/kg body weight, respectively) daily for the last four weeks of the eight-week period. The ingredients composition of experimental diets is according to our previous study [7].

The perirenal fat pad (1 g) was homogenized with 3 mL of RIPA buffer solution (ddw 8.7 mL/10× RIPA buffer 1 mL/100 mM PMSF 100 µL/Phosphatase Inhibitor Cocktail2 100 µL/Phosphatase Inhibitor Cocktail3 100 µL) at 4 °C for 10 min. The homogenate was centrifuged (3000 rpm, 5 min, 4 °C) to obtain the liquid at the bottom, which was centrifuged (15,000× g, 20 min, 4 °C) to acquire the cell protein for western blot analysis.
Aliquots of the extract, each containing 40 μg of protein, were evaluated for the expression of IR, GLUT4, PKC-ζ, PFK, PK, and ATGL. The samples were subjected to 10% sodium dodecyl sulfate-polyacrylamide gel electrophoresis. The separated proteins were electrotransferred to a polyvinylidene difluoride membrane that was incubated with blocking buffer (phosphate-buffered saline containing 0.05% Tween-20 (PBST) and 5% w/v nonfat dry milk) for 1 h, washed three times with PBST, and then probed with 1:1000–1:2000 diluted solutions of anti-IR, anti-GLUT4, anti-PKC-ζ, anti-PFK, anti-PK, and anti-ATGL at 4 °C overnight. The intensity of the blots probed with 1:2000 diluted solutions of anti-α-tublin was used as a control to ensure that a constant amount of protein was loaded into each lane of the gel. The membrane was washed three times for 5 min each in PBST, and then incubated in a solution of horseradish peroxidase-conjugated anti-mouse IgG or anti-rabbit IgG secondary antibody, washed three times again for 5 min each in PBST, and exposed to the enhanced chemiluminescence reagent (Millipore, Darmstadt, Germany). Autoradiography was scanned and analyzed using a UVP Biospectrum image system (Level, Cambridge, UK).

Data are presented as means ± SD after analysis using one-way ANOVA and Duncan’s new multiple-range tests with the Statistical Analysis System (SAS) version 9.3 (Cary, NC, USA). All of the comparisons were made relative to the controls or negative control. The differences were considered to be statistically significant at p < 0.01 or 0.05, indicated in tables and figures by distinct letters.

The present study demonstrates that administration of GA may be helpful in ameliorating carbohydrate and lipid metabolism abnormalities via restoring insulin signaling, increasing glycolysis and lipolysis-related protein expressions, which reduces fat accumulation in perirenal adipose tissues and alleviate hypertriglyceridemia in HFD-induced diabetic rats. Our findings support that GA exerts therapeutic effects and has the potential to be used in clinical medicine or as a dietary supplement on preventing the progression of complications in DM.

The authors would like to thank the Ministry of Science and Technology of the Republic of China, Taiwan, for mainly financially supporting this research under contract No. MOST 104-2320-B-003-003-MY3. This article was also partially subsidized by the National Taiwan Normal University (NTNU), Taiwan. 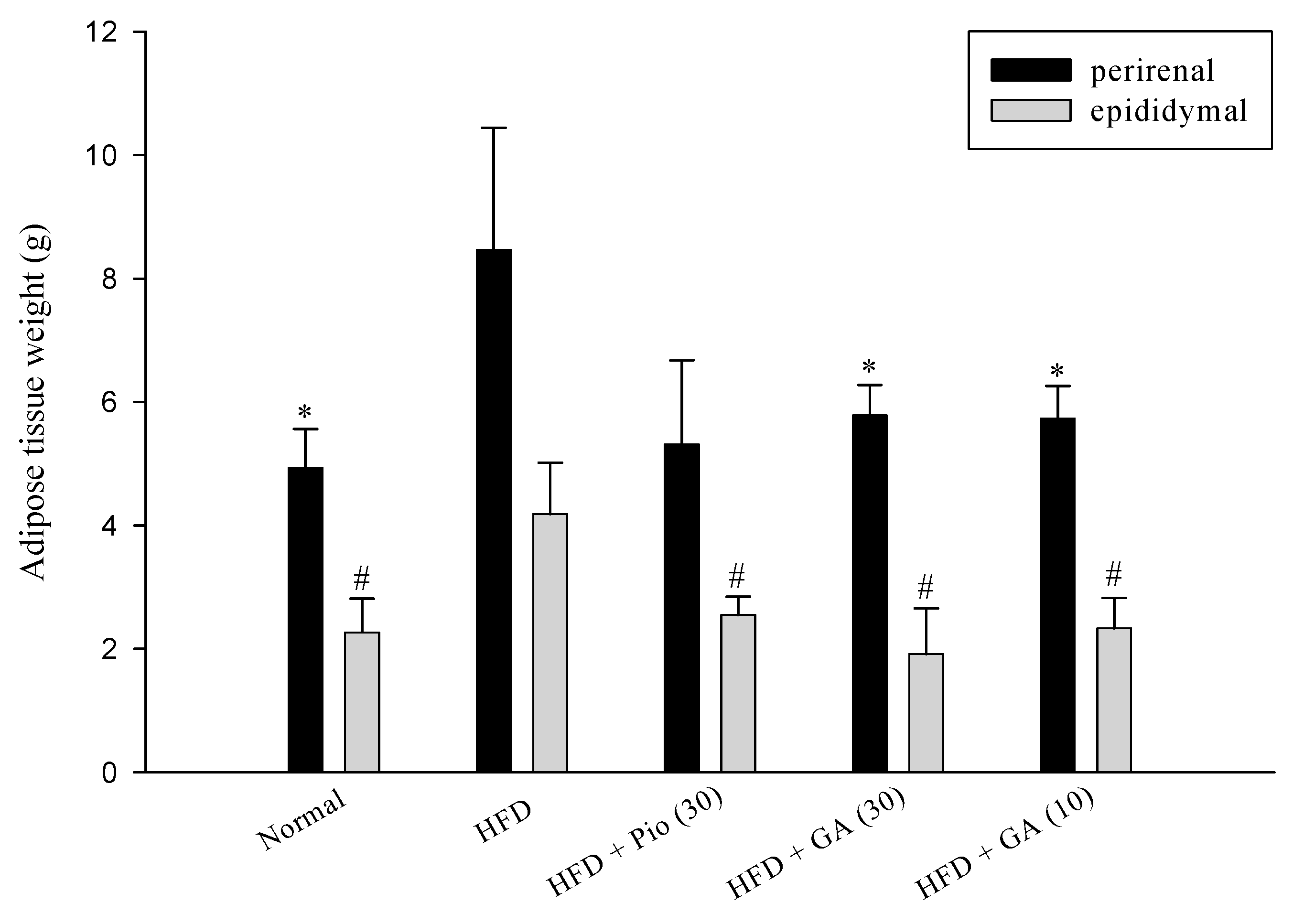 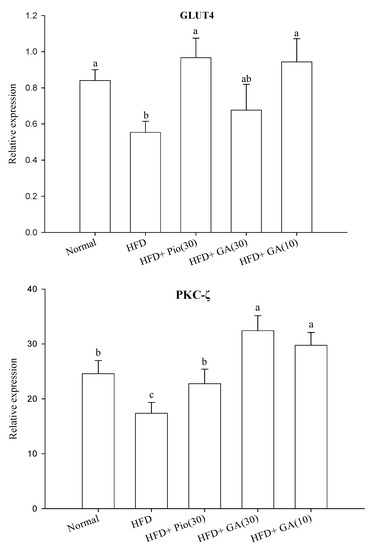 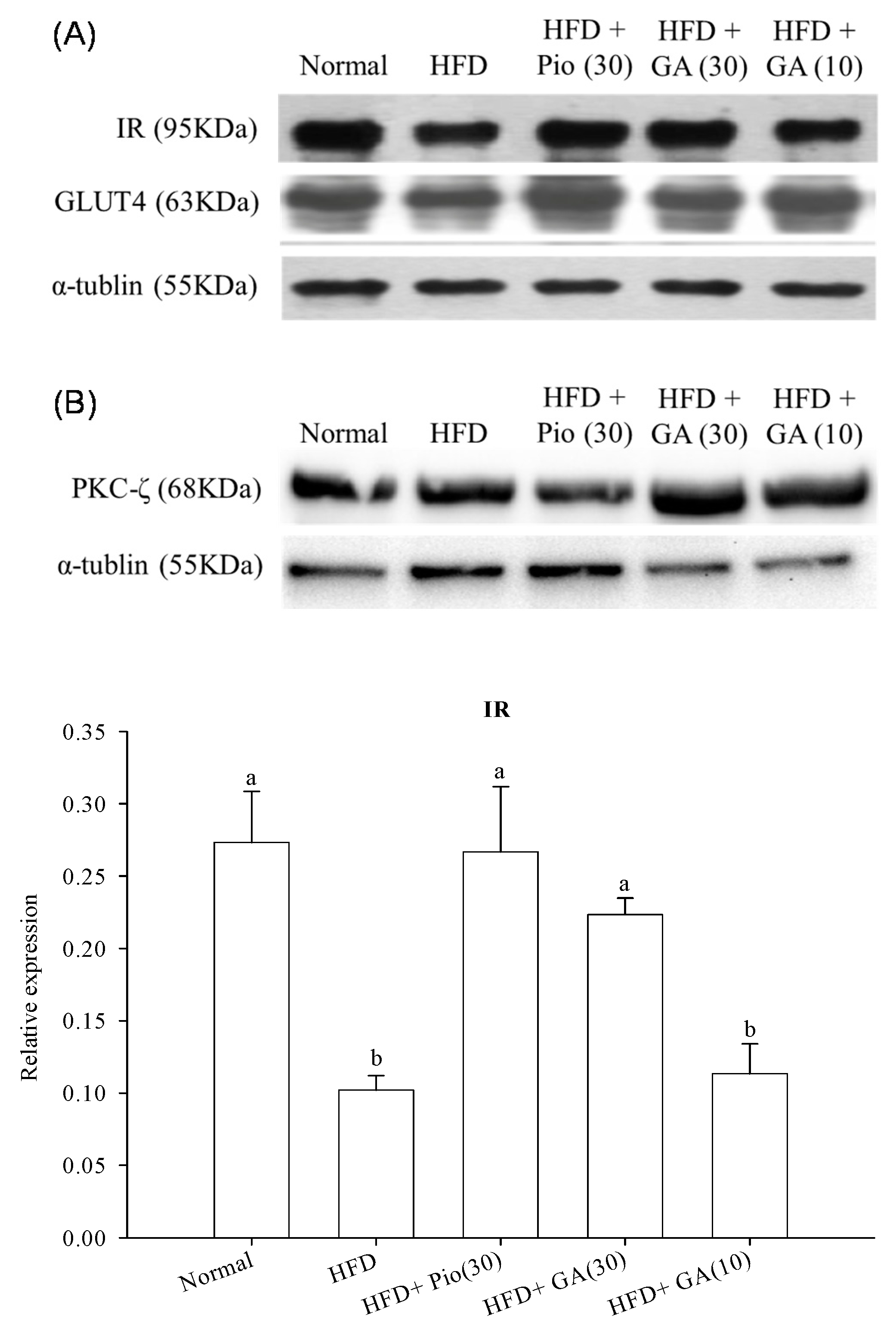 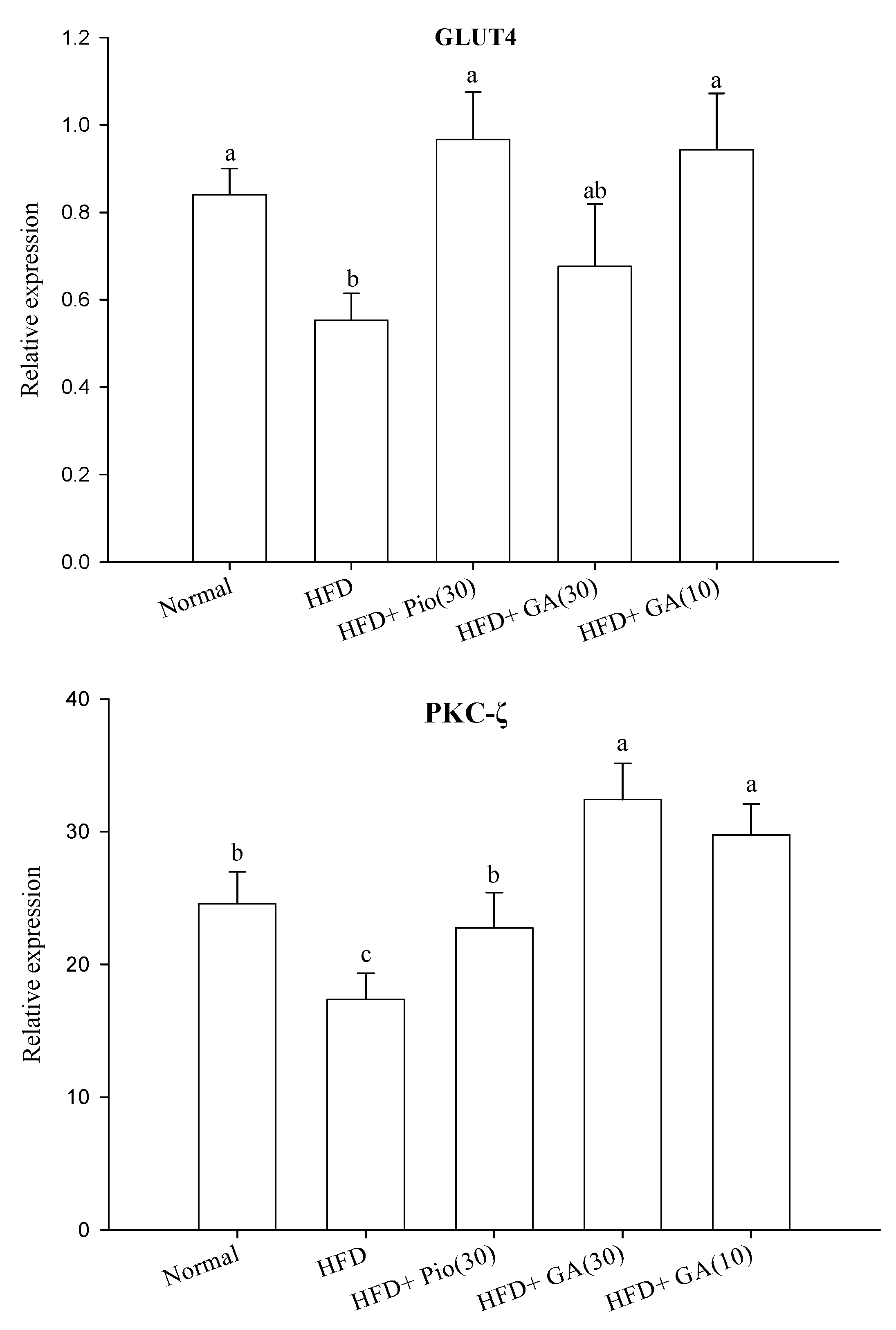 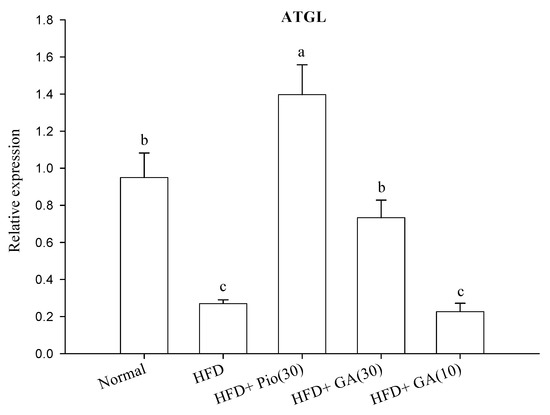