Could Aspirin and Diets High in Fiber Act Synergistically to Reduce the Risk of Colon Cancer in Humans?

Epigallocatechin gallate (EGCG) is a catechin and an abundant polyphenol in green tea. Although several papers have evaluated EGCG as a cosmetic constituent, the skin hydration effect of EGCG is poorly understood. We aimed to investigate the mechanism by which EGCG promotes skin hydration by measuring hyaluronic acid synthase (HAS) and hyaluronidase (HYAL) gene expression and antioxidant and anti-pigmentation properties using cell proliferation assay, Western blotting analysis, luciferase assay, 2,2-diphenyl-1-picrylhydrazyl (DPPH) assay, and reverse transcription polymerase chain reaction (RT-PCR) analysis. RT-PCR showed that EGCG increased the expression of natural moisturizing factor-related genes filaggrin (FLG), transglutaminase-1, HAS-1, and HAS-2. Under UVB irradiation conditions, the expression level of HYAL was decreased in HaCaT cells. Furthermore, we confirmed the antioxidant activity of EGCG and also showed a preventive effect against radical-evoked apoptosis by downregulation of caspase-8 and -3 in HaCaT cells. EGCG reduced melanin secretion and production in melanoma cells. Together, these results suggest that EGCG might be used as a cosmetic ingredient with positive effects on skin hydration, moisture retention, and wrinkle formation, in addition to radical scavenging activity and reduction of melanin generation. View Full-Text
Keywords: epigallocatechin gallate; skin hydration; antioxidant; anti-melanogenesis epigallocatechin gallate; skin hydration; antioxidant; anti-melanogenesis
►▼ Show Figures 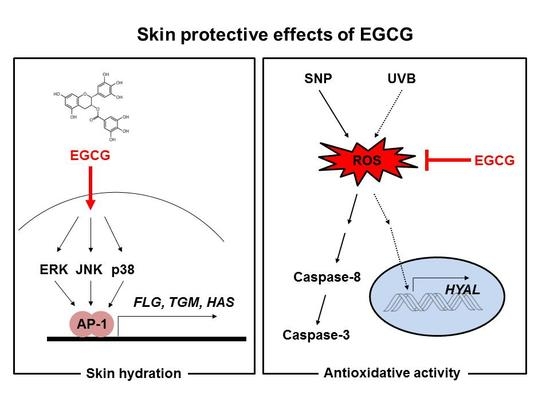