Implications of Aquaglyceroporin 7 in Energy Metabolism

The aquaglyceroporin AQP7 is a pore-forming transmembrane protein that facilitates the transport of glycerol across cell membranes. Glycerol is utilized both in carbohydrate and lipid metabolism. It is primarily stored in white adipose tissue as part of the triglyceride molecules. During states with increased lipolysis, such as fasting and diabetes, glycerol is released from adipose tissue and metabolized in other tissues. AQP7 is expressed in adipose tissue where it facilitates the efflux of glycerol, and AQP7 deficiency has been linked to increased glycerol kinase activity and triglyceride accumulation in adipose tissue, leading to obesity and secondary development of insulin resistance. However, AQP7 is also expressed in a wide range of other tissues, including kidney, muscle, pancreatic β-cells and liver, where AQP7 also holds the potential to influence whole body energy metabolism. The aim of the review is to summarize the current knowledge on AQP7 in adipose tissue, as well as AQP7 expressed in other tissues where AQP7 might play a significant role in modulating whole body energy metabolism. View Full-Text
Keywords: aquaglyceroporins; obesity; insulin resistance aquaglyceroporins; obesity; insulin resistance
►▼ Show Figures 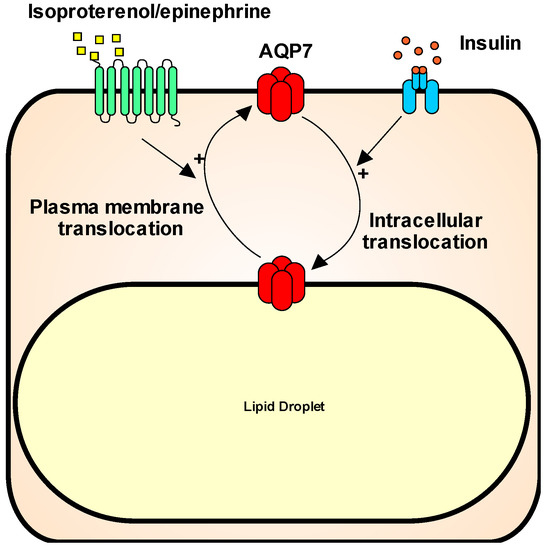