Receptor-Like Kinase LYK9 in Pisum sativum L. Is the CERK1-Like Receptor that Controls Both Plant Immunity and AM Symbiosis Development
Next Article in Special Issue

Aqueous Extract of Pomegranate Alone or in Combination with Citalopram Produces Antidepressant-Like Effects in an Animal Model of Menopause: Participation of Estrogen Receptors

Current therapy of mood disorders has several limitations. Although a high number of drugs are clinically available, as of today, nearly two-thirds of individuals do not achieve full symptomatic remission after treatment with conventional antidepressants. Moreover, several weeks of drug treatment are usually required to obtain clinical effects, a limitation that has considerable clinical implications, ranging from high suicide risk to reduced compliance. The characteristic lag time in classical antidepressant effectiveness has given great impulse to the search for novel therapeutics with more rapid effects. l-acetylcarnitine (LAC), a small molecule of growing interest for its pharmacological properties, is currently marketed for treatment of neuropathic pain. Recent preclinical and clinical data suggested that LAC may exert antidepressant effects with a more rapid onset than conventional drugs. Herein, we review data supporting LAC antidepressant activity and its distinctive mechanisms of action compared with monoaminergic antidepressants. Furthermore, we discuss the unique pharmacological properties of LAC that allow us to look at this molecule as representative of next generation antidepressants with a safe profile.
Keywords: l-acetylcarnitine; mood disorders; antidepressant; chronic pain; acetylation; epigenetics; adult neurogenesis; NF-κB; mGlu2 l-acetylcarnitine; mood disorders; antidepressant; chronic pain; acetylation; epigenetics; adult neurogenesis; NF-κB; mGlu2

l-Acetylcarnitine (LAC) is a small molecule of growing interest for its biological and pharmacological properties. Originally, LAC primary function was attributed to its role in the transport of short- and medium-chain acyl groups outside mitochondria, a step required for utilization of fatty acids and glucose [1]. Besides its role in energy metabolism, during the last two decades, a number of studies have shown that LAC actions range from antioxidant, neuromodulatory, and neuroprotective effects to modulation of gene expression [2,3,4,5,6,7,8]. Because of the multiplicity of actions and the excellent safety and tolerability profile, LAC efficacy has been investigated in a number of clinical conditions and neurological disorders (Table 1). The drug is currently marketed for the treatment of neuropathic pain. Recent preclinical and clinical data support LAC antidepressant effects and suggest novel underlying cellular and molecular effects, including epigenetic mechanisms. Herein, we discuss the unique pharmacological properties of LAC that allow us to consider this molecule as a novel antidepressant molecule.

LAC is an endogenous compound widely distributed in many tissues, including brain. Chemically, LAC is the acetylated derivative of the amino acid l-carnitine whose function is generally correlated with regulation of energy metabolism within mitochondria [1]. Its de novo synthesis is catalyzed by the enzyme carnitine acetyltransferase (CAT), mainly located on the inner mitochondrial membrane as well as in endoplasmic reticulum and peroxisome [26,27]. CAT promotes the transfer of an acetyl group from acetyl-Coenzyme A (acetyl-CoA) to carnitine, thereby producing LAC and free CoA (Figure 1) [28,29].
After being synthetized, LAC is transported outside mitochondria into the cytosol by the enzyme carnitine/acetylcarnitine translocase (CACT) [30,31,32]. This is a crucial metabolic reaction for β-oxidation of fatty acids whereby LAC facilitates the transport of acetyl-CoA across mitochondrial membranes [1]. A nuclear carnitine acetyltransferase can also convey LAC from cytosol to the nucleus, increasing the local pool of available acetyl groups [33]. It has been estimated that neurons from adult brain contain a relatively high level of LAC, with highest content in hypothalamus [34,35].

When exogenously administered, LAC is easily absorbed. Due to its amphiphilic structure, LAC is mobile throughout the plasma membranes and can rapidly cross blood-brain barrier [36,37]. Indeed, LAC can be transported by the high-affinity sodium-dependent organic cation/transporter (OCTN2), which is functionally expressed in cells forming the blood-brain barrier [38].
A wide range of mechanisms have been proposed to explain the multiplicity of LAC activities within nervous tissues. In particular, it has been demonstrated that LAC modulates the activity of nerve growth factor (NGF) and enhances the expression of NGF receptors in striatum/hippocampus during development and in aged rats [39,40,41]. Moreover, LAC modulates different neurotransmitter systems, including the gabaergic, dopaminergic, and cholinergic system [42,43,44,45,46], the latter by increasing acetyl-CoA content and choline acetyltransferase (ChAT) activity [47,48,49].
Recently, evidence that LAC serves as donor of acetyl groups further supported additional functions that go beyond its classical role in energy metabolism. In particular, its ability to contribute to acetylation of -OH or -NH2 functional groups on amino acids and N-terminal groups in proteins [2,7,8,50,51] has opened up new avenues to explain mechanisms underlying important LAC activities. Indeed, LAC has been suggested to modulate gene expression by an epigenetic mechanism exerted via acetylation of histone proteins and transcription factors [7,8,50,51,52,53]. Epigenetic mechanisms are physiologically achieved by activity of two classes of enzymes—histone acetyltransferases (HATs) and histone deacetylases (HDACs)—that transfer and remove acetyl groups in histones and transcription factors, respectively [54]. HATs and HDACs were originally identified as chromatin modifying enzymes by operating posttranslational modifications of histones [55]. Later, it was demonstrated that HATs and HDACs do not exclusively target histone proteins but also modulate the activity of a number of transcription factors. Several HAT and HDAC inhibitors are currently under investigation for epigenetic modulation of gene expression. LAC itself, similarly to HDAC inhibitors, regulates epigenetic mechanisms by increasing the acetylation level of histones and transcription factors such as NF-κB [8,51,53,56]. Studies from our groups indicated that LAC regulates the activity of NF-κB signaling pathways by increasing acetylation of the p65/RelA subunit at lysine 310, an event that may enhance transcriptional activity of the protein [7,8]. This effect has been correlated with the ability of LAC to induce expression of metabotropic glutamate receptor type-2 (mGlu2), a potential underlying mechanism for a wide spectrum of pharmacological activities ranging from analgesic, proneurogenic, and antidepressant effects of LAC [7,8,50,51,56,57].

4. LAC as a Novel Antidepressant Drug with Unique Properties

Mood disorders are highly prevalent and disabling conditions. Despite a large number of clinically available drugs, as of today, nearly two-thirds of individuals do not achieve full symptomatic remission after treatment with conventional antidepressants [98]. In addition, in treatment responders several weeks (2–6 w) of drug treatment are required to obtain clinical effects, a lag time which has considerable implications ranging from high suicide risk to reduced compliance [98]. Even when remission is achieved, the majority of individuals also suffer residual symptoms, including chronic pain and cognitive impairment, which further contribute to the disease burden. At present, one clinical study in dysthymic patients has proposed that LAC may be more rapid in its therapeutic effects than the selective serotonin reuptake inhibitor fluoxetine. This finding is preliminary, but it is quite interesting that in animal models, drug effects were also more rapid when compared to the tricyclic antidepressant chlorimipramine [51]. Future studies in larger and more heterogenous patient populations need to confirm this preliminary observation. The characteristic lag time in classical antidepressant effectiveness has given impulse to the search for novel therapeutics with more rapid effects. In such respect, the finding of ketamine as a rapid antidepressant in drug resistant patients has been a major breakthrough [99,100,101]. Unfortunately, the drug is characterized by adverse effects that limit its use [102]. Unlike ketamine, LAC has a high tolerability profile, and it is considered safe in humans [62]. In principle, this could allow its employment even in patient subpopulations who are very sensitive to the side effects associated with classical monoaminergic antidepressant drugs. LAC clinical studies were mainly performed in elderly patients. A recent meta-analysis confirmed that LAC is indeed more effective in older than in younger patients [61]. At present, no clear explanation is available for such a peculiarity of LAC. Although research efforts are required to confirm these findings, they suggest that LAC may represent a potential alternative to classical antidepressants. In particular, the elderly population and patients with comorbid medical conditions that make them vulnerable to adverse drug effects could represent an ideal subpopulation for LAC administration. In the future, it may also be interesting to assess whether LAC may produce antidepressant effects in subpopulations of drug-resistant patients.
LAC is currently marketed for treatment of neuropathic pain. Several studies, including double-blind placebo-controlled studies, have shown that LAC may represent a consistent therapeutic option for peripheral neuropathies [52,103]. As previously mentioned, LAC-mediated modulation of mGlu2 gene expression via NF-κB p65 acetylation has been proposed as a major contributor to its analgesic effects [7,50,56,103]. Recently, it has been shown that LAC, compared to other effective analgesic drugs, can also result in a very long-lasting analgesic effect in experimental models of both chronic inflammatory and neuropathic pain [53]. Once again, LAC long lasting effects were associated with an increase in mGlu2 receptor protein levels in the dorsal horns of spinal cord [53]. These observations have important clinical implications in view of the possibility that the drug might also reduce relapses in patients suffering from chronic pain. In light of the frequent comorbidity between depression and chronic pain [104], LAC exerting antidepressant and analgesic effects via common mechanisms (Figure 2) may represent an ideal treatment option.
In summary, for a long time there have been few drugs mechanistically distinct from classical monoaminergic antidepressants for treatment of mood disorder. LAC represents a next-generation antidepressant drug with novel mechanisms of action and high tolerability. Future investigations of the detailed cellular and molecular mechanisms underlying LAC effects may help in the development of potentially rapidly acting therapeutics and, in parallel, increase our current knowledge on the pathophysiology of depressive disorders. 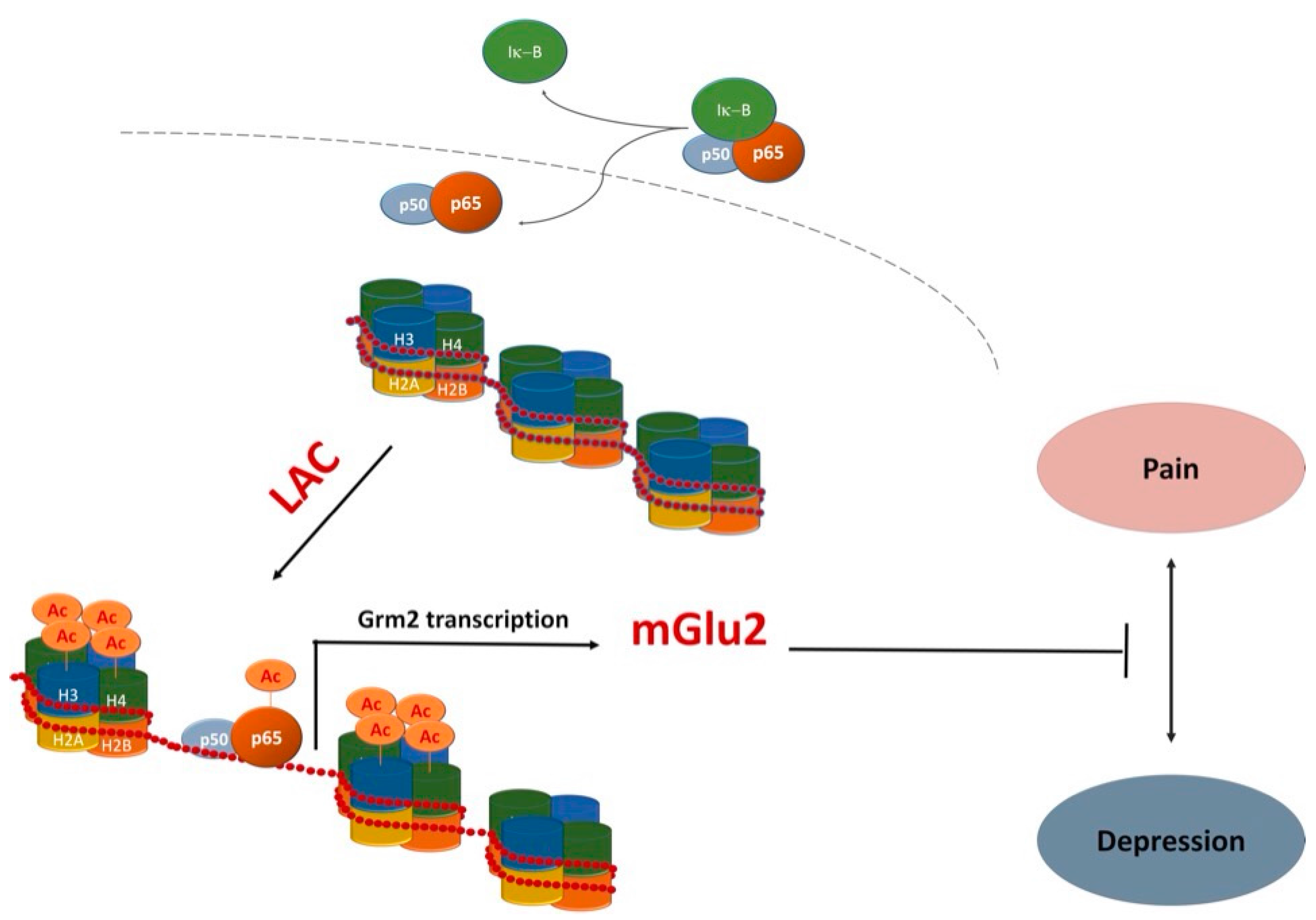