Blood-Brain Barrier Dysfunction and the Pathogenesis of Alzheimer’s Disease

Brain capillary endothelial cells form the blood-brain barrier (BBB), which is covered with basement membranes and is also surrounded by pericytes and astrocyte end-feet in the neurovascular unit. The BBB tightly regulates the molecular exchange between the blood flow and brain parenchyma, thereby regulating the homeostasis of the central nervous system (CNS). Thus, dysfunction of the BBB is likely involved in the pathogenesis of several neurological diseases, including Alzheimer’s disease (AD). While amyloid-β (Aβ) deposition and neurofibrillary tangle formation in the brain are central pathological hallmarks in AD, cerebrovascular lesions and BBB alteration have also been shown to frequently coexist. Although further clinical studies should clarify whether BBB disruption is a specific feature of AD pathogenesis, increasing evidence indicates that each component of the neurovascular unit is significantly affected in the presence of AD-related pathologies in animal models and human patients. Conversely, since some portions of Aβ are eliminated along the neurovascular unit and across the BBB, disturbing the pathways may result in exacerbated Aβ accumulation in the brain. Thus, current evidence suggests that BBB dysfunction may causatively and consequently contribute to AD pathogenesis, forming a vicious cycle between brain Aβ accumulation and neurovascular unit impairments during disease progression. View Full-Text
Keywords: amyloid-β; astrocytes; basement membrane; cerebral amyloid angiopathy; endothelial cells; neurovascular unit; pericytes; tight junctions amyloid-β; astrocytes; basement membrane; cerebral amyloid angiopathy; endothelial cells; neurovascular unit; pericytes; tight junctions
►▼ Show Figures 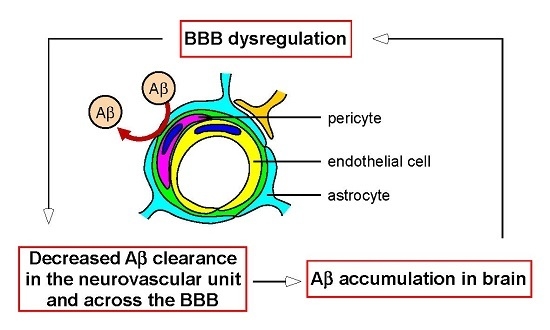