Challenging the Metallothionein (MT) Gene of Biomphalaria glabrata: Unexpected Response Patterns Due to Cadmium Exposure and Temperature Stress
Next Article in Special Issue

The adult mammalian central nerve system has fundamental difficulties regarding effective neuroregeneration. The aim of this study is to investigate whether human dental pulp cells (DPCs) can promote neuroregeneration by (i) being differentiated toward neuronal cells and/or (ii) stimulating local neurogenesis in the adult hippocampus. Using immunostaining, we demonstrated that adult human dental pulp contains multipotent DPCs, including STRO-1, CD146 and P75-positive stem cells. DPC-formed spheroids were able to differentiate into neuronal, vascular, osteogenic and cartilaginous lineages under osteogenic induction. However, under neuronal inductive conditions, cells in the DPC-formed spheroids differentiated toward neuronal rather than other lineages. Electrophysiological study showed that these cells consistently exhibit the capacity to produce action potentials, suggesting that they have a functional feature in neuronal cells. We further co-cultivated DPCs with adult mouse hippocampal slices on matrigel in vitro. Immunostaining and presto blue assay showed that DPCs were able to stimulate the growth of neuronal cells (especially neurons) in both the CA1 zone and the edges of the hippocampal slices. Brain-derived neurotrophic factor (BDNF), was expressed in co-cultivated DPCs. In conclusion, our data demonstrated that DPCs are well-suited to differentiate into the neuronal lineage. They are able to stimulate neurogenesis in the adult mouse hippocampus through neurotrophic support in vitro. View Full-Text
Keywords: human dental pulp cells; adult hippocampal slice culture; neuronal regeneration; co-cultivation human dental pulp cells; adult hippocampal slice culture; neuronal regeneration; co-cultivation
►▼ Show Figures 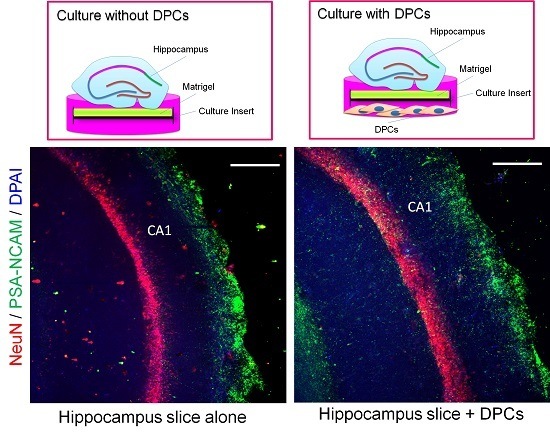