Mechanosensitive miRNAs and Bone Formation
Next Article in Special Issue

Tubulin is the target for many small-molecule natural compounds, which alter microtubules dynamics, and lead to cell cycle arrest and apoptosis. One of these compounds is colchicine, a plant alkaloid produced by Colchicum autumnale. While C. autumnale produces a potent cytotoxin, colchicine, and expresses its target protein, it is immune to colchicine’s cytotoxic action and the mechanism of this resistance is hitherto unknown. In the present paper, the molecular mechanisms responsible for colchicine resistance in C. autumnale are investigated and compared to human tubulin. To this end, homology models for C. autumnale α-β tubulin heterodimer are created and molecular dynamics (MD) simulations together with molecular mechanics Poisson–Boltzmann calculations (MM/PBSA) are performed to determine colchicine’s binding affinity for tubulin. Using our molecular approach, it is shown that the colchicine-binding site in C. autumnale tubulin contains a small number of amino acid substitutions compared to human tubulin. However, these substitutions induce significant reduction in the binding affinity for tubulin, and subsequently fewer conformational changes in its structure result. It is suggested that such small conformational changes are insufficient to profoundly disrupt microtubule dynamics, which explains the high resistance to colchicine by C. autumnale. View Full-Text
Keywords: tubulin; colchicine; C. autumnale; binding site; cytotoxicity; molecular modeling tubulin; colchicine; C. autumnale; binding site; cytotoxicity; molecular modeling
►▼ Show Figures 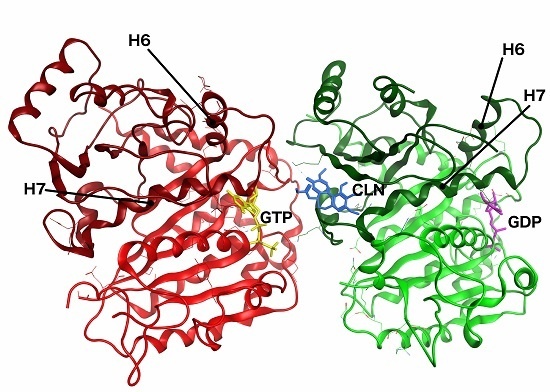