Down’s syndrome (DS), the most common genetic cause of significant intellectual disability in children and adults is caused by the trisomy of either all or a part of human chromosome 21 (HSA21). Patients with DS mostly suffer from characteristic tumor types. Although individual patients of DS are at a higher risk for acute leukemia and testicular cancers, other types of solid tumors including breast cancers are mostly uncommon and have significantly lower-than-expected age-adjusted incidence rates. Except for an increased risk of retinoblastomas, and lymphomas, the risk of developing solid tumors has been found to be lower in both children and adults, and breast cancer was found to be almost absent (Hasle H., The Lancet Oncology, 2001). A study conducted in the United States found only one death when 11.65 were expected (Scholl T et al., Dev Med Child Neurol. 1982). A recent study examined mammogram reports of women with DS treated in the largest medical facility specifically serving adults with DS in the United States. It was found that only 0.7% women with DS had been diagnosed with breast cancers (Chicoine B et al., Intellect Dev Disabil. 2015). Here we describe a case of breast cancer in a 25-year-old patient with DS. The disease was presented as lymph node positive carcinoma with alterations of tumor suppressor genes characteristic to the triple negative breast cancer subtype. Comprehensive Genomic Profiling (CGP) revealed a wild-type status for BRCA1. The CGP report showed a frameshift mutation, A359fs*10 of the tumor suppressor gene INPP4B and another frameshift mutation, R282fs*63 of tumor suppressor gene TP53 in the tumor biopsy as characteristically found in triple-negative breast cancers. The VUS (Variance of Unknown Significance) alteration(s) were identified in ASXL1 (L1395V), NTRK1 (G18E), DDR2 (I159T), RUNX1 (amplification), ERG (amplification), SOX2 (T26A), FAM123B (G1031D), and HNF1A (A301T). Bonafide cancer-related genes of chromosome 21 amplified in the patient’s tumor are RUNX1 and ERG genes. After the completion of the radiation, the patient was placed on everolimus which was based on the result of her CGP report. Thus, post-mastectomy radiation therapy was completed with a recommendation for everolimus for one year. During the time of writing of this report, no metastatic lesions were identified. The patient currently has no evidence of disease.
Keywords: Down’s syndrome; triple negative breast cancer; tumor suppressor genes; PI3K-mTOR pathway Down’s syndrome; triple negative breast cancer; tumor suppressor genes; PI3K-mTOR pathway

Down’s syndrome (DS) is a hereditary disease of chromosomal rearrangement(s). Patients with DS are known to exhibit rearrangement(s) of chromosomal material between chromosome 21 and another chromosome. As a result of this rearrangement, a patient bears the usual two copies of chromosome 21, plus extra material from chromosome 21 attached to another chromosome (which take part in the rearrangement). However, the rearrangement or translocation trisomy 21 is not common in the people with Down’s syndrome. More than 90% of Down’s syndrome is caused by an extra copy of chromosome 21, also called trisomy 21.
Triplication of the human chromosome 21 in DS is associated with an altered genetic dosage of different genes including transcription factors. Since appropriate expressions, as well as the functioning of transcription factors, are essential for regulation of different signals within cells, an altered gene dosage becomes crucial for the development of complex diseases including cancers. Patterns of development of various organ-type cancers in DS are unique and emphasize the relationship between chromosome 21 and tumorigenesis. Children with DS have a ~10- to 20-fold higher risk of developing acute lymphoblastic leukemia (ALL) and acute myeloid leukemia (AML), as compared with non-DS children [1]. Certain solid tumors including lymphomas, retinoblastomas, and testicular germ cell tumors, have been reported in individuals with DS [2,3,4]. However, children with DS do not have a uniformly increased risk of developing solid tumors. A decade ago, Patja et al. reported that in a cohort of a little over 1000 women with DS there was no observed case of breast cancers [5]. A national epidemiological study on mortality over 24 years in France had been conducted by Daniel Sage and colleagues. The outcome of the study showed only five deaths from breast cancers in women with DS (68.98 expected (Fisher test; p < 0.00005)) [6]. A similar type of study conducted in the United States found comparable results; only one death when 11.65 were expected [7]. A recent study examined mammogram reports of women with DS treated in the largest medical facility specifically serving adults with DS in the United States. The study examined mammogram reports of women with DS. Records of 684 women and results of 993 mammograms were reviewed, including 902 screening and 93 diagnostic mammograms. The study found that only 0.7% women with DS had been diagnosed with breast cancer [8]. In line with the above reports, Martel-Billard et al. studied trisomy 21 and breast cancer and concluded that chromosomal abnormality of DS protects against breast cancers via genetic mechanisms [9]. The development pattern of cancer in DS patients provides a distinct model to improve our understanding of the genetic basis of tumorigenesis as well as mechanisms of sensitivity to anti-cancer drugs. Here, we describe the first case of triple negative breast cancer in a 25-year-old female patient with Down’s syndrome.

To the best of our knowledge, here we describe the first case of triple negative breast cancer in a 25-year-old patient with DS. The disease was presented as lymph node positive carcinoma with alterations of tumor suppressor genes, TP53 and INPP4B, characteristic to the triple negative breast cancer subtype. During the time of writing of this report, no metastatic lesions were identified in the patient, and the PET/CT image did not show any evidence of disease.

We acknowledge our patient and her family. We sincerely thank our clinical personnel. We acknowledge FoundationOne and Guardant360. We acknowledge the Department of Molecular and Experimental Medicine, Avera Center for Precision Oncology. 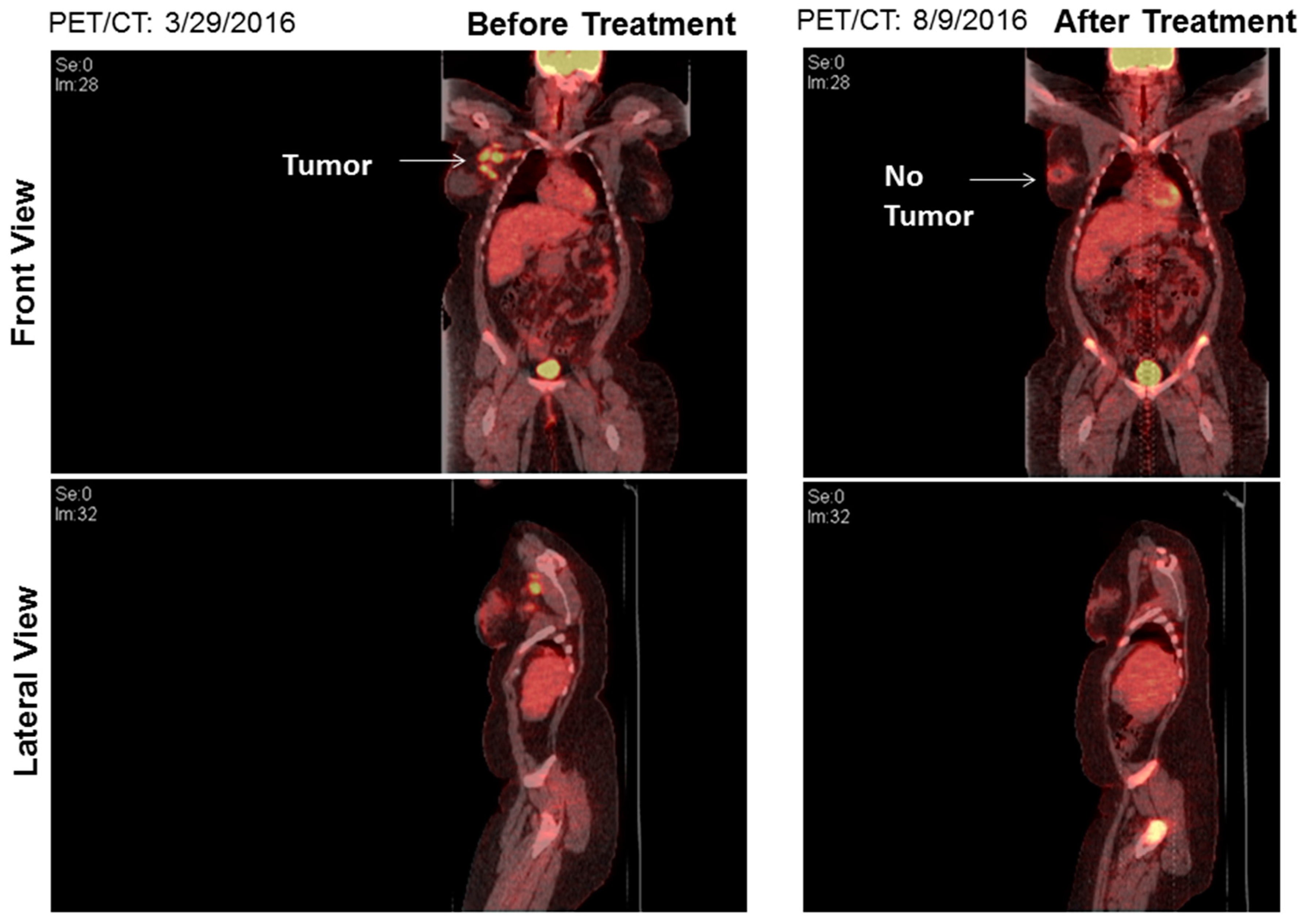