Neurotrauma: The Crosstalk between Neurotrophins and Inflammation in the Acutely Injured Brain
Previous Article in Journal

NGF and Its Receptors in the Regulation of Inflammatory Response

Most growth factors are initially synthesized as precursors then cleaved into bioactive mature domains and pro-domains, but the biological roles of pro-domains are poorly understood. In the present study, we investigated the pro-domain (or pro-peptide) of brain-derived neurotrophic factor (BDNF), which promotes neuronal survival, differentiation and synaptic plasticity. The BDNF pro-peptide is a post-processing product of the precursor BDNF. Using surface plasmon resonance and biochemical experiments, we first demonstrated that the BDNF pro-peptide binds to mature BDNF with high affinity, but not other neurotrophins. This interaction was more enhanced at acidic pH than at neutral pH, suggesting that the binding is significant in intracellular compartments such as trafficking vesicles rather than the extracellular space. The common Val66Met BDNF polymorphism results in a valine instead of a methionine in the pro-domain, which affects human brain functions and the activity-dependent secretion of BDNF. We investigated the influence of this variation on the interaction between BDNF and the pro-peptide. Interestingly, the Val66Met polymorphism stabilized the heterodimeric complex of BDNF and its pro-peptide. Furthermore, compared with the Val-containing pro-peptide, the complex with the Met-type pro-peptide was more stable at both acidic and neutral pH, suggesting that the Val66Met BDNF polymorphism forms a more stable complex. A computational modeling provided an interpretation to the role of the Val66Met mutation in the interaction of BDNF and its pro-peptide. Lastly, we performed electrophysiological experiments, which indicated that the BDNF pro-peptide, when pre-incubated with BDNF, attenuated the ability of BDNF to inhibit hippocampal long-term depression (LTD), suggesting a possibility that the BDNF pro-peptide may interact directly with BDNF and thereby inhibit its availability. It was previously reported that the BDNF pro-domain exerts a chaperone-like function and assists the folding of the BDNF protein. However, our results suggest a new role for the BDNF pro-domain (or pro-peptide) following proteolytic cleave of precursor BDNF, and provide insight into the Val66Met polymorphism. View Full-Text
Keywords: BDNF; pro-peptide; polymorphism; long-term depression; hippocampus BDNF; pro-peptide; polymorphism; long-term depression; hippocampus
►▼ Show Figures 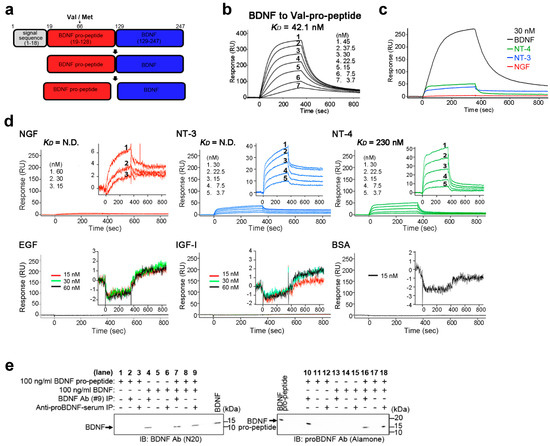