The three major blood cell types, i.e., platelets, erythrocytes and leukocytes, are all produced in the bone marrow. While red blood cells are the most numerous and white cells are the largest, platelets are small fragments and account for a minor part of blood volume. However, platelets display a crucial function by preventing bleeding. Upon vessel wall injury, platelets adhere to exposed extracellular matrix, become activated, and form a platelet plug preventing hemorrhagic events. However, when platelet activation is exacerbated, as in rupture of an atherosclerotic plaque, the same mechanism may lead to acute thrombosis causing major ischemic events such as myocardial infarction or stroke. In the past few years, major progress has been made in understanding of platelet function modulation. In this respect, membrane channels formed by connexins and/or pannexins are of particular interest. While it is still not completely understood whether connexins function as hemichannels or gap junction channels to inhibit platelet aggregation, there is clear-cut evidence for a specific implication of pannexin1 channels in collagen-induced aggregation. The focus of this review is to summarize current knowledge of the role of connexins and pannexins in platelet aggregation and to discuss possible pharmacological approaches along with their limitations and future perspectives for new potential therapies. View Full-Text
Keywords: platelet aggregation; collagen; connexins; pannexins platelet aggregation; collagen; connexins; pannexins
►▼ Show Figures 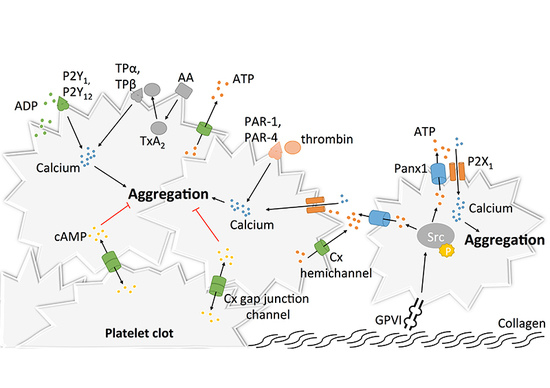