Targeting Neurotrophins to Specific Populations of Neurons: NGF, BDNF, and NT-3 and Their Relevance for Treatment of Spinal Cord Injury
Previous Article in Journal

Ovarian cancer is the eighth most common cancer in women worldwide, and epithelial ovarian cancer (EOC) represents 90% of cases. Nerve growth factor (NGF) and its high affinity receptor tyrosine kinase A receptor (TRKA) have been associated with the development of several types of cancer, including EOC; both NGF and TRKA levels are elevated in this pathology. EOC presents high angiogenesis and several molecules have been reported to induce this process. NGF increases angiogenesis through its TRKA receptor on endothelial cells, and by indirectly inducing vascular endothelial growth factor expression. Other molecules controlled by NGF include ciclooxigenase-2, disintegrin and metalloproteinase domain-containing protein 17 (ADAM17) and calreticulin (CRT), proteins involved in crucial processes needed for EOC progression. These molecules could be modified through microRNA regulation, which could be regulated by NGF. MicroRNAs are the widest family of non-coding RNAs; they bind to 3′-UTR of mRNAs to inhibit their translation, to deadenilate or to degraded them. In EOC, a deregulation in microRNA expression has been described, including alterations of miR-200 family, cluster-17-92, and miR-23b, among others. Since the NGF-microRNA relationship in pathologies has not been studied, this review proposes that some microRNAs could be associated with NGF/TRKA activation, modifying protein levels needed for EOC progression. View Full-Text
Keywords: neurotrophins; nerve growth factor (NGF); Tyrosine kinase A receptor (TRKA); epithelial ovarian cancer; microRNAs neurotrophins; nerve growth factor (NGF); Tyrosine kinase A receptor (TRKA); epithelial ovarian cancer; microRNAs
►▼ Show Figures 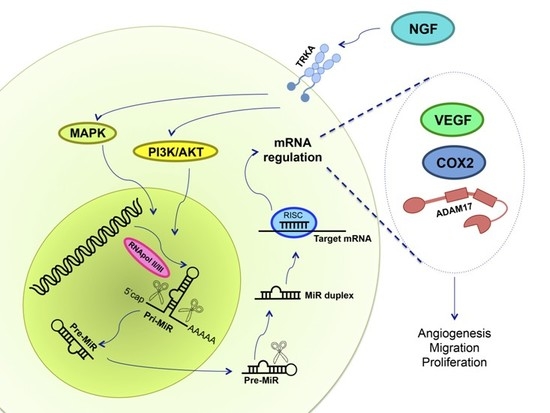