Bioavailability Comparison of Nine Bioselenocompounds In Vitro and In Vivo

Selenium (Se) is an essential trace element in animals, including humans, and exists in selenoproteins as selenocysteine (SeCys). It is reported that SeCys is encoded by the UGA codon in the primary structure of selenoprotein, and that humans have 25 genes encoding selenoproteins [1]. Although humans and animals ingest Se in various chemical forms via foods and feeds, Se deficiency has been reported. Keshan disease is a disease that originated in Northeast China where the soil Se concentration is very low [2]. In clinical settings, Se deficiency is often reported in patients who receive total parental nutrition (TPN) and sick children who are given special milk for specific metabolic diseases [3]. In these cases, Se supplements are frequently prescribed.
The toxicity and bioavailability of Se strongly depend on the chemical form of Se. Se is an essential element in animals but can be very toxic when the amount ingested exceeds the nutritional intake level. In addition, the adequate physiological range between deficient and excess doses is narrow [4], being one order of magnitude (0.1–1.0 μg/g diet or mL drinking water) in experimental animals. Generally, inorganic Se species, such as selenite, are more toxic than organic Se species, such as selenomethionine (SeMet), and naturally occurring Se compounds, such as animal and plant metabolites, are less toxic than artificial Se compounds. The possible nutritional sources of Se are as follows. As plant selenometabolites, the most abundant Se species are Se-methylselenocysteine (MeSeCys) and its derivatives, such as γ-glutamyl-Se-methylselenocysteine [5]. Selenohomolanthionine (SeHLan) is also identified as a plant Se metabolite [6]. SeMet, which is the major Se metabolite in yeast, has already been used for Se supplementation [7]. As animal selenometabolites, SeCys is found in selenoproteins. Se ingested by animals within the physiological range is excreted into urine as 1β-methylseleno-N-acetyl-d-galactosamine (SeSug1) [8]. Beyond the physiological range, the trimethylselenonium ion (TMSe+) appears in urine [9]. Recently, it was reported that selenocyanate (SeCN−) is a Se metabolite in animal cells [10]. Other inorganic Se species, such as selenite and selenate, are also used for Se supplementation [11]. At present, there is limited information on the toxicity and bioavailability of the possible nutritional sources of Se. In addition, one of the interesting clinical issues is which chemical form of Se is the most effective and safest for use in TPN and as a food additive.
In this study, the nine Se compounds mentioned above were defined as bioselenocompounds, and their toxicity and bioavailability in vitro and in vivo were compared. The chemical structures of the bioselenocompounds used in this study are shown in Figure 1. In particular, to obtain quantitative data of the effects of bioselenocompounds on the recovery from Se deficiency in vivo, speciation analysis using HPLC coupled with an inductively coupled plasma mass spectrometer (ICP-MS) was adopted.

Caco-2 cells were used in the in vitro permeability assay in the next experiment, and the cytotoxicity of bioselenocompounds was assayed 6 h after exposure to evaluate the harmful effects of bioselenocompounds on the cells. The cytotoxicity and/or proliferative effects of bioselenocompounds on HepG2 cells were analyzed 24 and 48 h after exposure. The cells could not be cultured for more than 6 h under the culture conditions of the in vitro permeability assay because the cells would be exposed to unexpected cellular stress.
Selenite significantly reduced the viability of Caco-2 cells at 8.0 μg Se/mL or higher doses (Figure 2a). SeCys2 also marginally but significantly reduced the cell viability at 0.8 μg Se/mL or higher doses. In contrast, MeSeCys significantly increased cell viability in a dose-dependent fashion from the dose of 0.8 μg Se/mL, indicating that MeSeCys stimulated the proliferation of Caco-2 cells. The other bioselenocompounds did not significantly change the cell viability. We also evaluated the viability of HepG2 cells for longer exposure periods (24 and 48 h) to more precisely compare the cytotoxicity of the bioselenocompounds. As was observed in Caco-2 cells, selenite and SeCys2 were toxic to HepG2 cells and the toxicities were dose-dependent from 0.8 and 0.4 μg Se/mL, respectively (Figure 2b,c). In addition to MeSeCys, SeMet also stimulated the proliferation of HepG2 cells exposed for 24 h, although the effect of SeMet was smaller than that of MeSeCys (Figure 2b). After 48 h exposure, MeSeCys still induced the cell proliferation at low doses; however, it showed cytotoxicity at 40 μg Se/mL or higher doses (Figure 2c). SeMet also showed marginal cytotoxicity rather than a proliferative effect. Other inorganic Se species, such as selenate and SeCN−, reduced cell viability at high doses, i.e., 40 and 80 μg Se/mL, respectively, after 48 h exposure.

The bioselenocompounds were evaluated and compared in accordance with the standard protocol of the in vitro permeability assay using Caco-2 cells. In this assay, Caco-2 cells were exposed to the bioselenocompounds at 1.0 μg Se/mL because all of the bioselenocompounds at that dose did not show apparent cytotoxicity in the experiment mentioned above (Figure 2a).
MeSeCys showed the highest percentage permeation (17.2% ± 1.4%) among the bioselenocompounds, followed by SeMet (12.4% ± 0.13%) (Figure 3a), i.e., these two selenoamino acids were more efficiently transported from the basolateral side to the apical side than the other species. There were no significant differences in permeability among the inorganic Se species, such as selenite (3.4% ± 0.066%), selenate (6.6% ± 0.83%), and SeCN− (3.8% ± 0.44%), and among all organic Se species except MeSeCys and SeMet, such as SeHLan (2.5%± 0.23%), SeCys2 (3.1% ± 0.30%), SeSug1 (2.9% ± 0.60%), and TMSe+ (3% ± 0.42%), even though the permeability of selenate was significantly higher than those of the organic Se species. Lucifer Yellow (LY) was used to calibrate the permeability. As LY could not be transported across Caco-2 cells, its permeability would indicate non-specific transport, such as membrane leakage. LY leakage was 0.81% ± 0.36% in our experiments. Hence, selenite, SeCN−, SeHLan, SeSug1, and TMSe+ were slightly transported under our experimental conditions.
We speculated that MeSeCys and SeMet permeated the cell membrane via an amino acid transporter. Then, we evaluated whether Met would affect the permeability of MeSeCys and SeMet or not. The permeability of MeSeCys and SeMet was reduced in the presence of 10 mM Met (Figure 3b).

2.3. Bioavailability of Bioselenocompounds In Vivo

4.3. In Vitro Transport of Se Compounds

Confluent Caco-2 cells at the cell density of around 20,000 cells/cm2 were harvested by trypsinization and suspended in basal medium (Corning, Corning, NY, USA) containing MITO+ Serum Extender (Corning) at the cell density of 4 × 105 cells/mL. A 0.5 mL aliquot of the cell suspension was seeded on the inserts of a Falcon 24-Multiwell Insert System (Corning). The inserts were transferred onto a 24-well plate that contained 1 mL of basal medium, and incubation was carried out for 24 h. Then, the basal medium was carefully removed from the wells and the inserts, and 1.0 and 0.5 mL aliquots of the differentiation medium (Entero-STIM) containing MITO+ Serum Extender (Corning) were added to the wells and the inserts, respectively. The plate was incubated for another 3 days to induce the formation of a monolayer of differentiated Caco-2 cells. The medium was carefully removed from the inserts and the inserts were washed with transport buffer (HBSS + 10 mM HEPES, pH 7.4). Then, a 350 μL aliquot of each Se compound solution in transport buffer or this solution with 10 mM l-methionine (Wako) was added to the insert chamber. These inserts were transferred onto a plate and a 50 μL aliquot was withdrawn from the chamber of each insert for measurement of the initial concentration of the donor chamber. One milliliter of transfer buffer was added to the plate wells and the plate was incubated on an orbital shaker at 37 °C for 90 min in a CO2 incubator. The transport buffer in the lower chamber was collected to determine Se concentration 90 min after the incubation. Se concentrations were measured by an inductively coupled plasma mass spectrometer (ICP-MS, Agilent 7700cx, Agilent, Hachiouji, Japan). The Se compound solution in the chamber of each insert was removed and a 300 μL aliquot of 300 μM Lucifer Yellow (LY) solution was added to the upper chamber. Then, the concentration of LY that permeated the lower chamber was determined by a fluorescence photometer (excitation wavelength: 485 nm, emission wavelength: 538 nm). Monolayers producing 0.3%–2.0% LY flux were recognized as intact monolayers of differentiated Caco-2 cells. Monolayers with flux exceeding 2.0% were excluded from the experiment.

All animal experiments were carried out according to the Principles of Laboratory Animal Care (NIH version, revised 1996) and the Guidelines of the Animal Investigation Committee, Chiba University, Japan (28-60, 28/01/2016).
Specific pathogen free (SPF) male Wistar rats (4 weeks of age) were purchased from Japan SLC (Shizuoka, Japan) and were housed in a humidity-controlled room maintained at 25 ± 2 °C with a 12 h light-dark cycle. The rats were fed a commercial diet (MF, Oriental Yeast Co., Ltd., Tokyo, Japan) and tap water ad libitum. After a one-week acclimation period, diet and water were changed to a Se-deficient diet (Oriental Yeast) and Milli-Q water (18.3 MΩ·cm), respectively. The rat fed the Se-deficient diet and the Milli-Q water for 3 weeks was used as an Se-deficient rat. The rats continuously fed the commercial diet and tap water served as the positive control.

The Se-deficient rats were orally administered each Se compound in saline at a dose of 10 μg Se/rat once a day for 2 consecutive days. The saline-administered rats served as the negative control. All the rats were sacrificed 24 h after administration by exsanguination under anesthesia. Non-heparinized blood was collected and clotted blood was centrifuged at 1600× g for 10 min to obtain serum. A 20 μL aliquot of the serum was applied to an HPLC coupled with an ICP-MS to analyze the distribution of Se. The HPLC system (Prominence, Shimadzu, Kyoto, Japan) consisted of an on-line degasser, an HPLC pump, a Rheodyne six-port injector, and a multi-mode size exclusion column (Shodex GS-520HQ, exclusion size >300,000 kDa, 7.5 i.d. × 300 mm with a guard column; Showa Denko, Tokyo, Japan). The multi-mode size exclusion column (GS-520HQ) was eluted with 50 mM Tris-HCl, pH 7.4, at the flow rate of 0.6 mL/min. The eluate was introduced directly into the ICP-MS nebulizer to detect Se at m/z 82.

All determinations were carried out in three replicates, and the results are shown as means ± SD. Statistical analysis was done by applying the Student’s t-test or one-way analysis of variance (ANOVA) with the Tukey test. A probability of p < 0.05 was considered to be statistically significant.

Although there were significant differences in Se transport among the bioselenocompounds available in our laboratory in vitro, Se in the bioselenocompounds except TMSe+ was equally assimilated into serum selenoproteins in vivo. In this sense, low-toxicity inorganic Se species, such as SeCN−, could be a potential form for Se supplementation in addition to selenoamino acids, such as SeMet and MeSeCys.

This study was supported by grants from the Food Safety Commission, Cabinet Office, Government of Japan (Research Program for Risk Assessment Study on Food Safety, No. 1601), and the Ministry of Education, Culture, Sports, Science and Technology, Japan, KAKENHI (Nos. 26293030, 15K14991, and 16H05812). 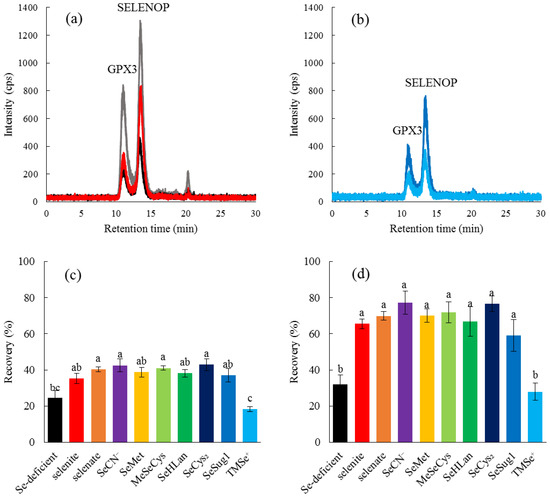 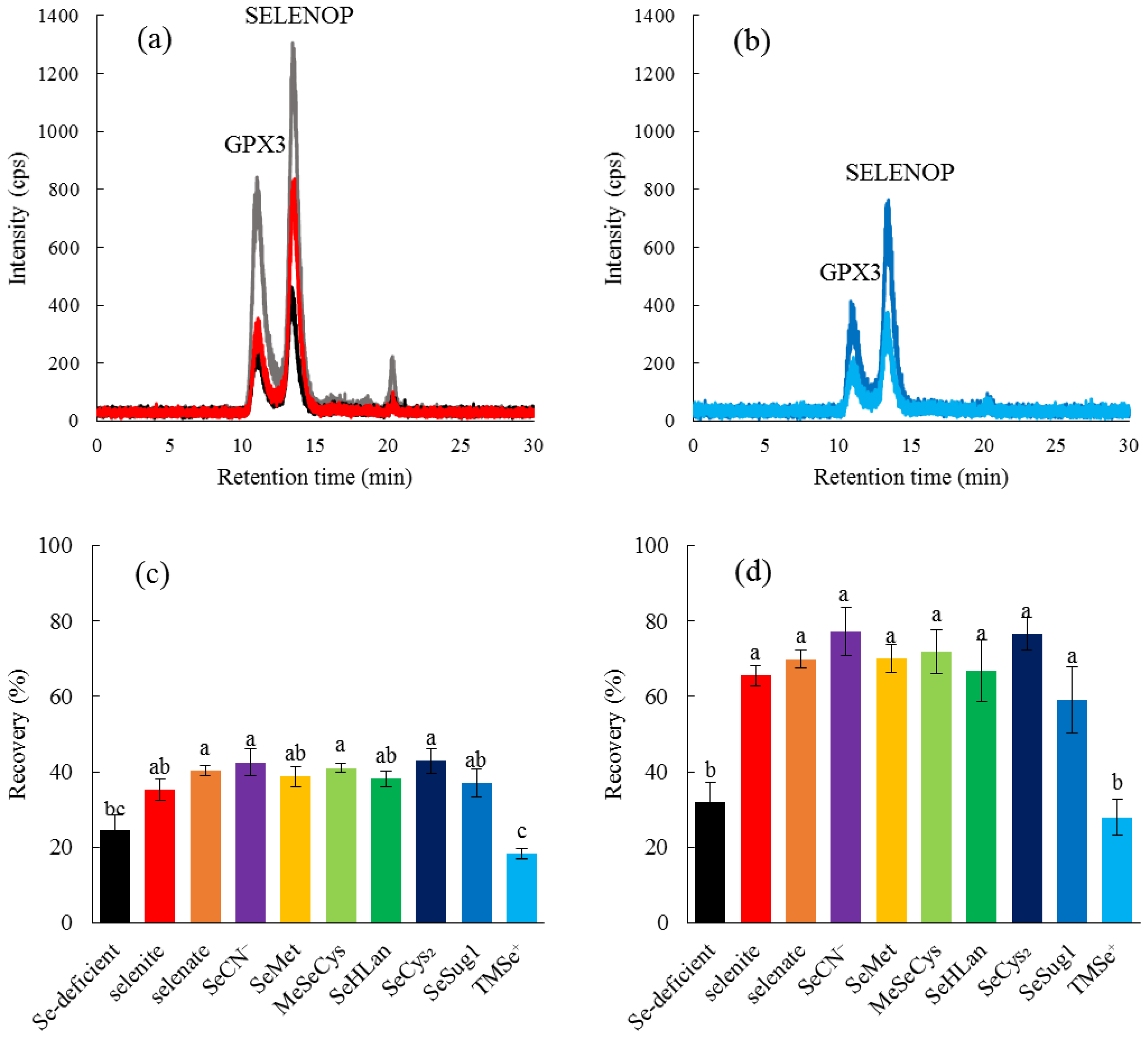