:
Mitogen-activated protein kinase kinases (MEK) 1 and 2 have crucial roles in tumorigenesis, cell proliferation, and protection from apoptosis, and their inhibition is therefore an attractive therapeutic strategy in cancer. Orally available and highly selective MEK inhibitors have been developed and assessed in numerous clinical trials, either alone or in combination with cytotoxic chemotherapy and/or other targeted agents. Of note, a complex picture of class-specific adverse effects associates with these drugs, frequently including inflammatory skin rash. Here, we investigated the response of normal human keratinocytes to the MEK inhibitors trametinib and cobimetinib, alone and in combination with the v-Raf murine sarcoma viral oncogene homolog B (BRAF) inhibitors dabrafenib and vemurafenib, in terms of signal transduction and de novo gene expression. MEK inhibitors triggered enhanced expression of interferon regulatory factor 1 (IRF1) and phosphorylation of signal transducer and activator of transcription 1 (STAT1), and up-regulated the keratinocyte-specific type I interferon κ (IFN-κ), the anti-viral effectors interferon-induced tetratricopeptide repeats (IFIT) 1 and 2, and the pro-inflammatory chemokine (C-C motif) ligand 2 (CCL2) and the C-X-C motif chemokine 10 (CXCL10), both at the mRNA and protein level. Impairment of IRF1 expression, or abrogation of STAT1 phosphorylation due to IFN-κ gene silencing, suppressed anti-viral and pro-inflammatory gene expression. These data suggest that, similar to what we observed for epidermal growth factor receptor (EGFR) blockade, MEK inhibition activates a type I interferon response, which is now recognized as an effective anti-cancer response, in human epidermal keratinocytes.
Keywords:
dabrafenib; vemurafenib; signal transduction; interferon κ; chemokine 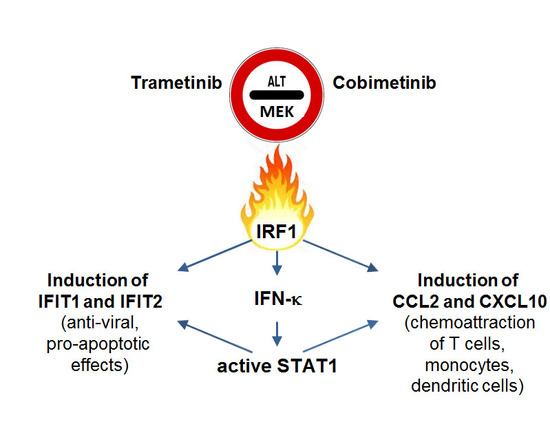 Many human cancers contain activating mutations in genes encoding the fundamental signaling cascade constituted of receptor tyrosine kinases, including epidermal growth factor receptor (EGFR), small GTPase Ras (RAS), v-Raf murine sarcoma viral oncogene homolog B (BRAF), Raf-1 proto-oncogene (CRAF), and the mitogen-activated protein kinase kinases (MEK) 1 and/or 2 [1]. These driving oncogenes lead to enhanced dependency on extracellular signal-regulated kinases (ERK) 1 and ERK2 (ERK) signaling and to amplification of ERK-driven cellular processes that are also cancer hallmarks, including sustained proliferation, resistance to cell death, activation of invasion, and metastasis [2]. In this context, the identification of activating BRAF mutations (most notably, BRAF-V600E) in a large number of human tumors led to the development of BRAF-V600E selective inhibitors and the regulatory approval of vemurafenib and dabrafenib [1]. Quite unexpectedly, these BRAF inhibitors were shown to possess the paradoxical effect of activating RAF and downstream ERK in cells with wild-type BRAF including skin keratinocytes, with consequent high incidence of hyper-proliferative disorders, including squamous cell carcinoma, in patients treated with these drugs [3,4,5]. To oppose this peculiar toxicity and improve therapeutic efficacy, the development of MEK inhibitors became a priority. MEK1 and MEK2 are dual-specificity kinases that catalyze activating phosphorylation at both tyrosine and threonine residues in ERK, in its turn the only known physiological substrate of MEK [6]. Thus, MEK is a potential bottleneck in the activation of diverse cellular responses of key importance for tumorigenesis [7]. Since the discovery of the first ERK experimental inhibitor PD98059 20 years ago [8], new MEK inhibitors occupying highly specific allosteric sites of the target molecules have provided the opportunity to achieve higher selectivity and have also contributed to validate MEK as a cancer drug target [9]. Two allosteric MEK inhibitors have received regulatory approval for the treatment of human cancers, namely trametinib and cobimetinib, in a protein kinase-specific drug discovery that continues today [10]. Finally, therapies that associate BRAF inhibitors with MEK inhibitors (dabrafenib with trametinib and vemurafenib with cobimetinib) are the current treatment strategies for BRAF-mutant advanced cancers, including melanoma [11,12].
The therapeutic use of kinase inhibitors and biological agents targeting kinase signaling pathways has introduced new toxicities in oncology clinics [5]. In particular, treatments that include EGFR inhibitors or MEK inhibitors typically associate with an increased risk of all-grade inflammatory skin rash characterized by papulo-pustular eruptions and acneiform dermatitis [13,14]. In our search for the molecular mechanisms underlying the pro-inflammatory and cytotoxic potential of EGFR inhibitors in the skin, we recently documented drug-induced activation of a type I interferon (IFN) innate immune response, with enhanced expression of the keratinocyte-specific IFN-κ, a number of anti-viral effectors including distinct members of the interferon-induced tetratricopeptide repeats (IFIT) family and immune mediators [15]. The purpose of the present work was to verify that the newly introduced MEK inhibitors share this type of bioactivity in normal human keratinocytes. Our results confirmed this hypothesis, and hence allow us to include these agents among the drugs that potentially contribute a type I IFN activation in the skin. Of major relevance, a growing body of literature indicates that the success of a variety of anti-cancer treatments implicates the induction of type I IFN signaling and shows that intra- and peri-tumoral expression levels of type I IFNs and IFN-stimulated genes correlate with favorable disease outcome in several cohorts of cancer patients [16,17,18]. Hence, beyond its plausible role in the elicitation of undesired skin-specific side effects, activation of type I IFN might be considered one of the anti-cancer mechanisms triggered by MEK inhibitors.

2.1. Trametinib and Cobimetinib Induce a Type I Interferon Response in Keratinocytes

Previously, we reported that EGFR inhibitors and the prototypic MEK inhibitor PD98059 led to activation of the type I interferon response in human keratinocytes, with up-regulation of numerous anti-viral effectors and a small group of genes specifically involved in immune cell-cell signaling, including the chemokine (C-C motif) ligand 2 (CCL2) and the C-X-C motif chemokine 10 (CXCL10) [15]. Our data emphasized the pro-apoptotic and pro-inflammatory potential of drugs targeting the EGFR-ERK axis in the epidermis, with implications for their toxicity but also for activation of the anti-cancer defense in the skin. Recently, two highly selective MEK inhibitors, namely trametinib (Trame) and cobimetinib (Cobi), have been introduced, either alone or in combination with BRAF inhibitors, in the treatment of advanced cancers, including metastatic melanoma [11]. We asked whether these new anti-MEK drugs could also trigger a type I interferon response. Here we show that, similar to what we described for EGFR inhibitors, both Trame and Cobi did induce significant interferon regulatory factor 1 (IRF1) up-regulation and signal transducer and activator of transcription 1 (STAT1) phosphorylation concomitant with progressive, dose-dependent inhibition of ERK phosphorylation (Figure 1). These signal transduction events were paralleled by significantly enhanced cell-associated levels of the keratinocyte-specific type I IFN-κ at all drug doses (Figure 1B,C), and also of the anti-viral effector IFIT1, as observed at 100 and 1000 nM concentration (Figure 1B,C).
Gene expression analysis confirmed dose-dependent up-regulation of IFN-κ transcript, which was statistically significant at 10 nM compared to untreated controls (p < 0.05), and maximal at 100 nM Trame or Cobi (Figure 2A). A similar profile was found for the transcripts of the anti-viral pro-apoptotic effector IFIT2 (Figure 2B) and of the chemokines CCL2 (Figure 2C) and CXCL10 (Figure 2D). Hence, both these MEK inhibitors activated a gene expression program that closely reproduced what we previously observed with EGFR inhibitors or PD98059 in human keratinocytes [15].

At present, the combinations of the BRAF inhibitors dabrafenib (Dabra) and vemurafenib (Vemu) with the MEK inhibitors, Trame and Cobi, respectively, have become a new standard of care for the treatment of BRAF-mutant metastatic melanoma due to their improved efficacy and reduced toxicity as compared to BRAF inhibitors alone [11,12]. In particular, BRAF inhibitors are responsible of a paradoxical ERK activation in non-BRAF-mutant cells including skin keratinocytes, leading to their hyper-proliferation and high incidence of epidermal neoplasms [5]. Notably, this peculiar skin toxicity is efficiently overcome by their association with MEK inhibitors [11,12]. In keeping with this evidence, we found that Dabra and Vemu alone significantly enhanced ERK phosphorylation compared to basal levels, whereas their combinations with Trame and Cobi were characterized by suppression of ERK phosphorylation, concomitant with significantly enhanced IRF1 and phosphorylated STAT1 (Figure 3A–C).
Up-regulation of IFN-κ and IFIT1 protein levels (Figure 3A–C), and of the chemokines CCL2 and CXCL10, both as transcripts (Figure 4A,B) and proteins released in cell supernatants (Figure 4C,D) confirmed the persistence of MEK inhibitor-associated type I IFN signature in these drug associations.

This study (project identification: No. 465) was approved on 23 February 2016 by Istituto Dermopatico dell’Immacolata review board, and performed according to the Declaration of Helsinki Guidelines. Primary cultures of normal human keratinocytes were obtained from healthy donors undergoing plastic surgery (n = 4, two females and two males, age 25–40) as previously described [40]. Keratinocytes were grown in serum-free Keratinocyte Growth Medium (Lonza, Walkersville, MD, USA), formed of Keratinocyte Basal Medium added of EGF, hydrocortisone, bovine insulin, bovine pituitary extract, and gentamycin sulfate [15]. In the 24 h before and during the experiments, keratinocyte cultures were kept in Keratinocyte Basal Medium (Lonza).

The small-molecule, cell permeant BRAF inhibitors vemurafenib and dabrafenib, and the MEK inhibitors trametinib and cobimetinib were purchased from Selleckchem (Munich, Germany). These inhibitors were dissolved in dimethylsulfoxide (DMSO). In all experiments performed on keratinocyte cultures, the DMSO concentration as vehicle control was 0.1% (v/v).

Chemokines CCL2 and CXCL10 in the culture medium were measured with dedicated kits from BD Pharmingen (San Diego, CA, USA).

The Wilcoxon signed-rank test (GraphPad prism Software, La Jolla, CA, USA) was applied to compare differences between groups of data. Significance was assumed at a p-value of 0.05 or less. 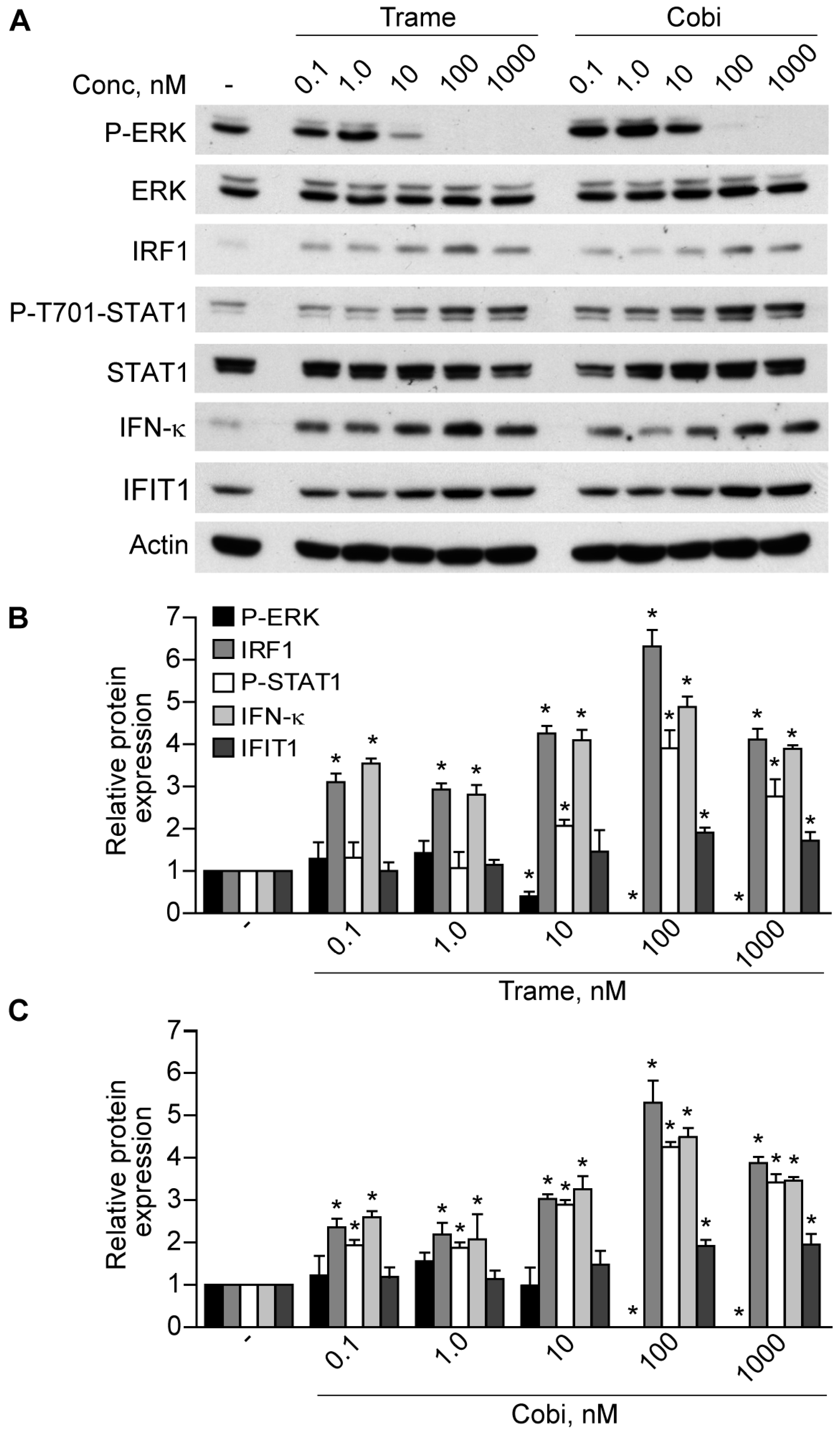 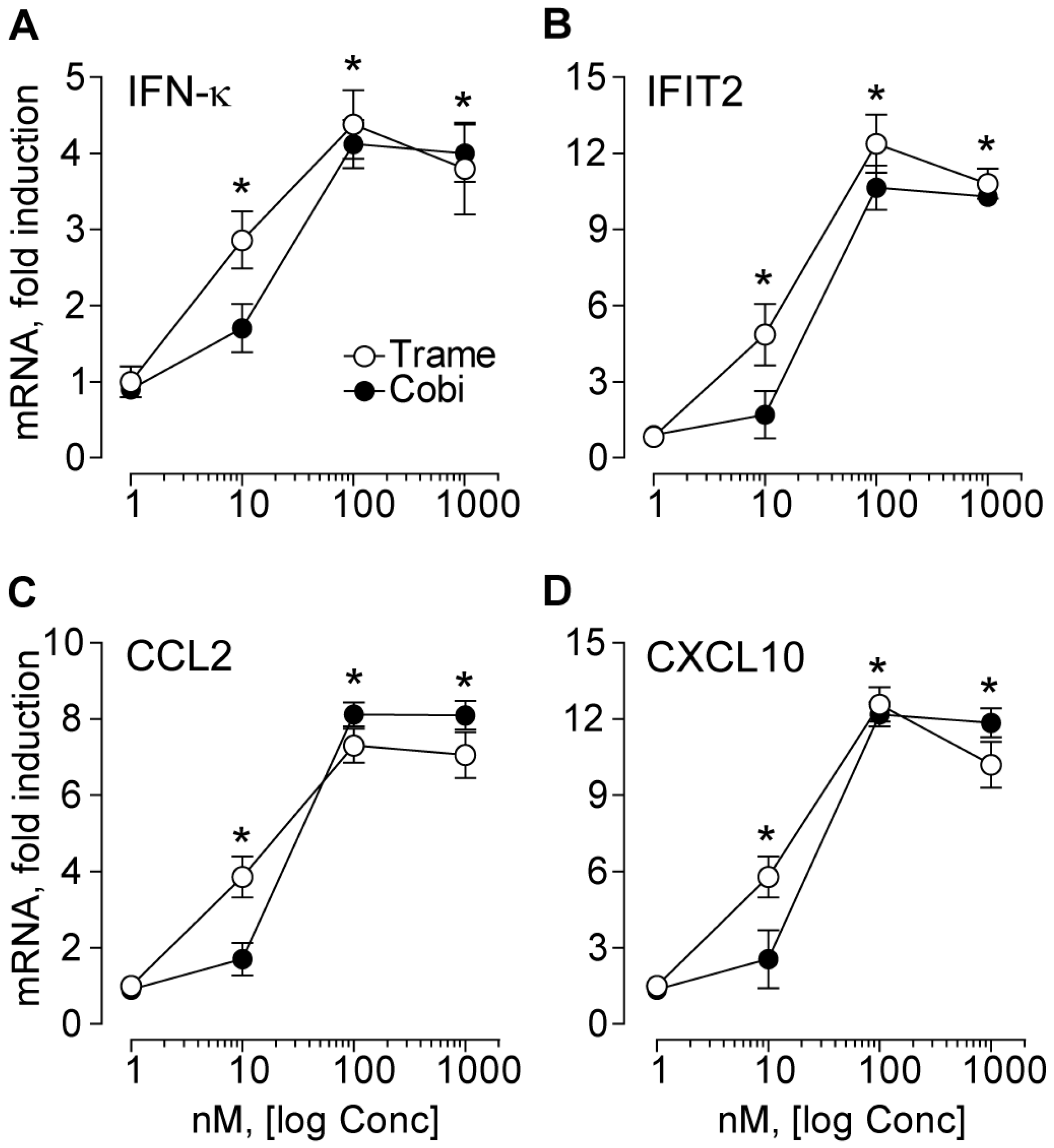 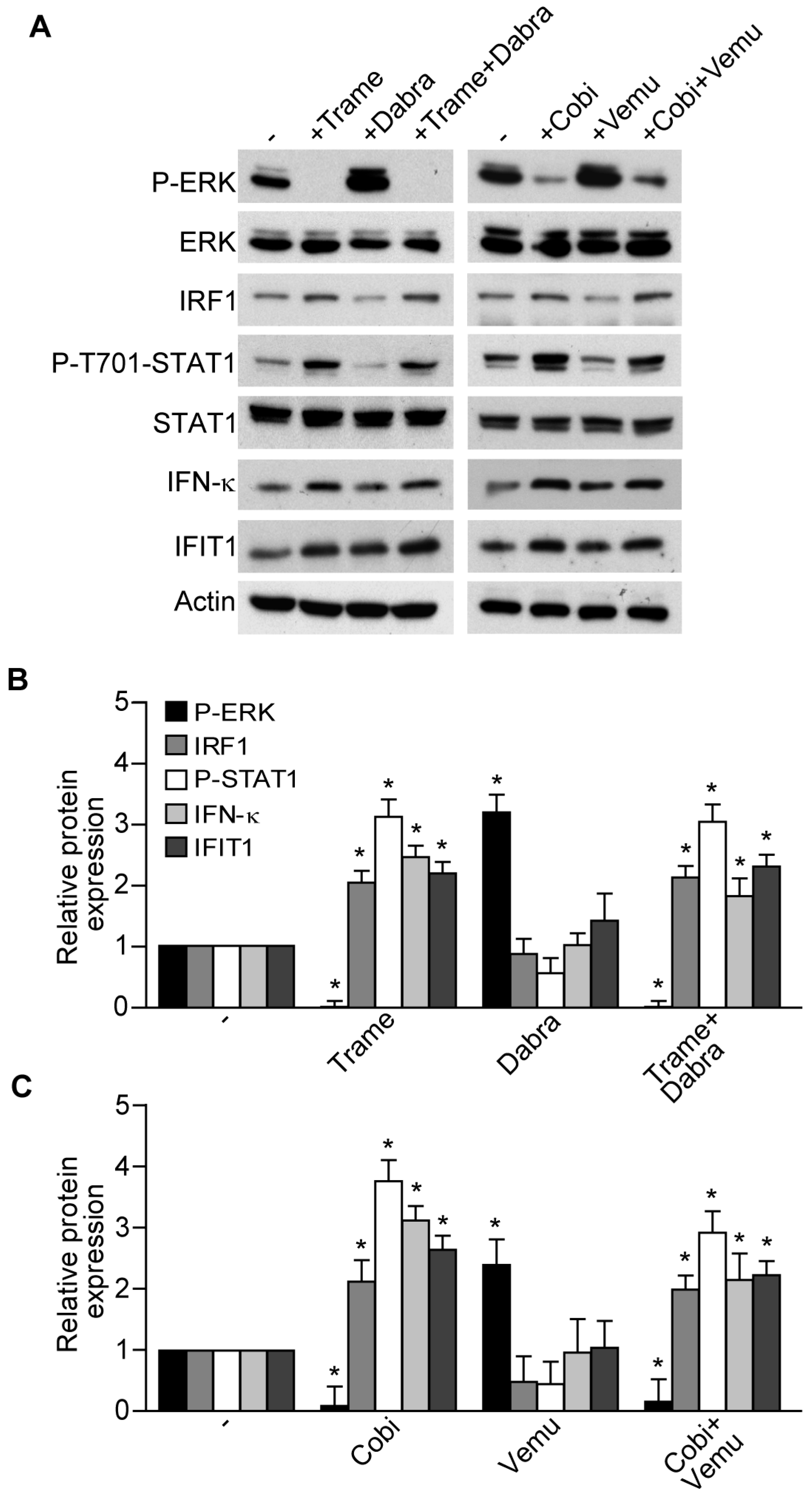 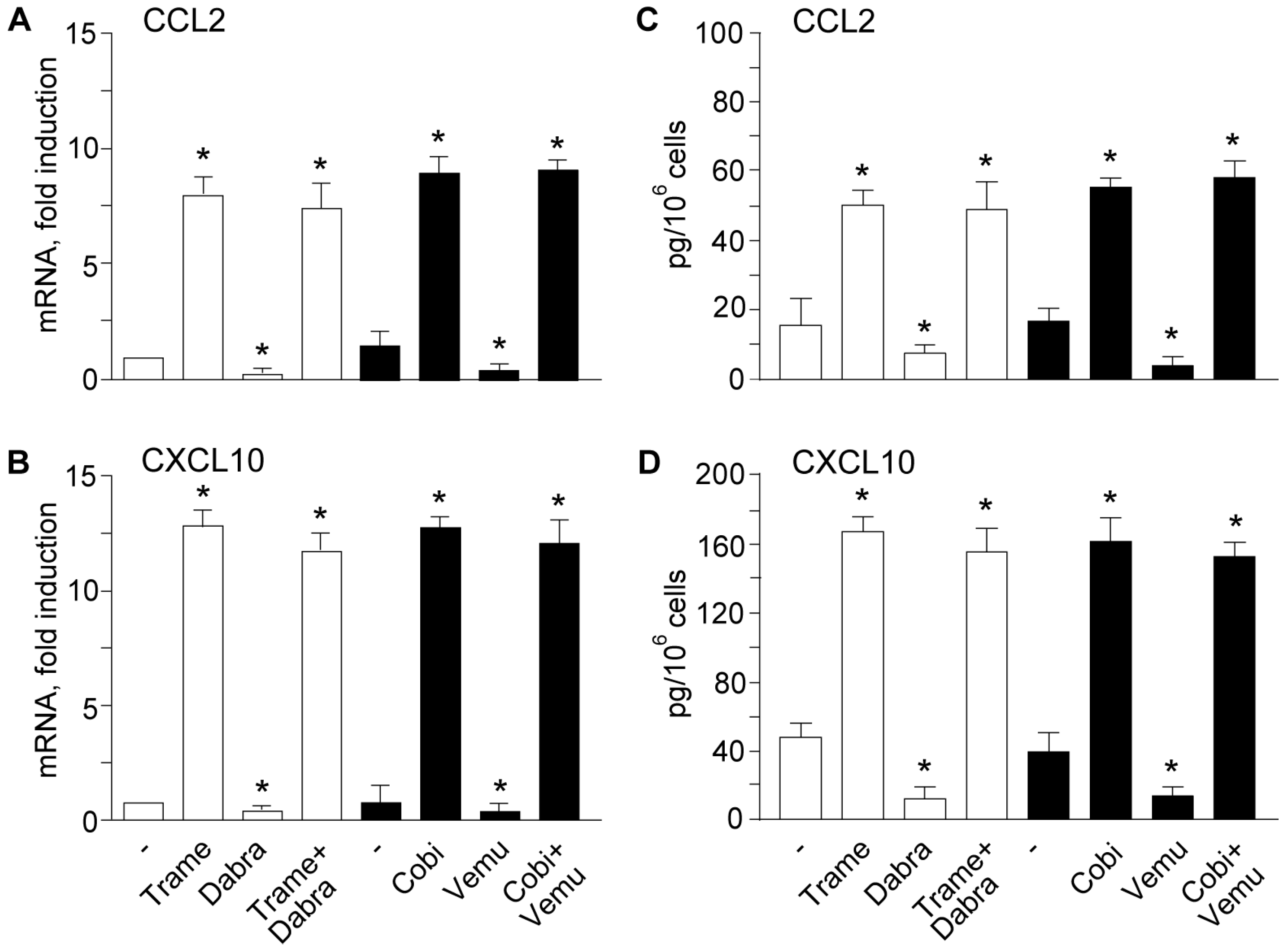 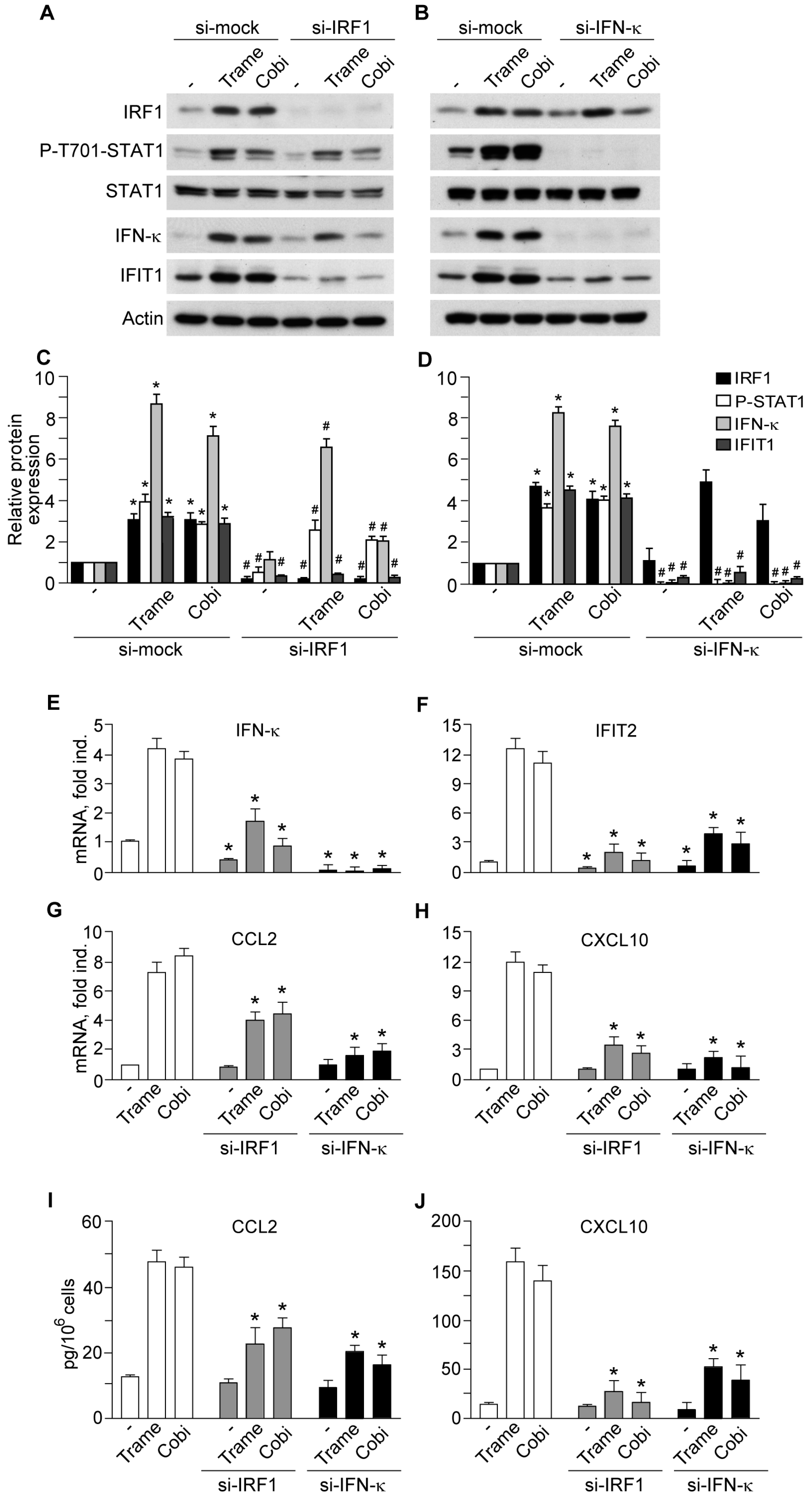 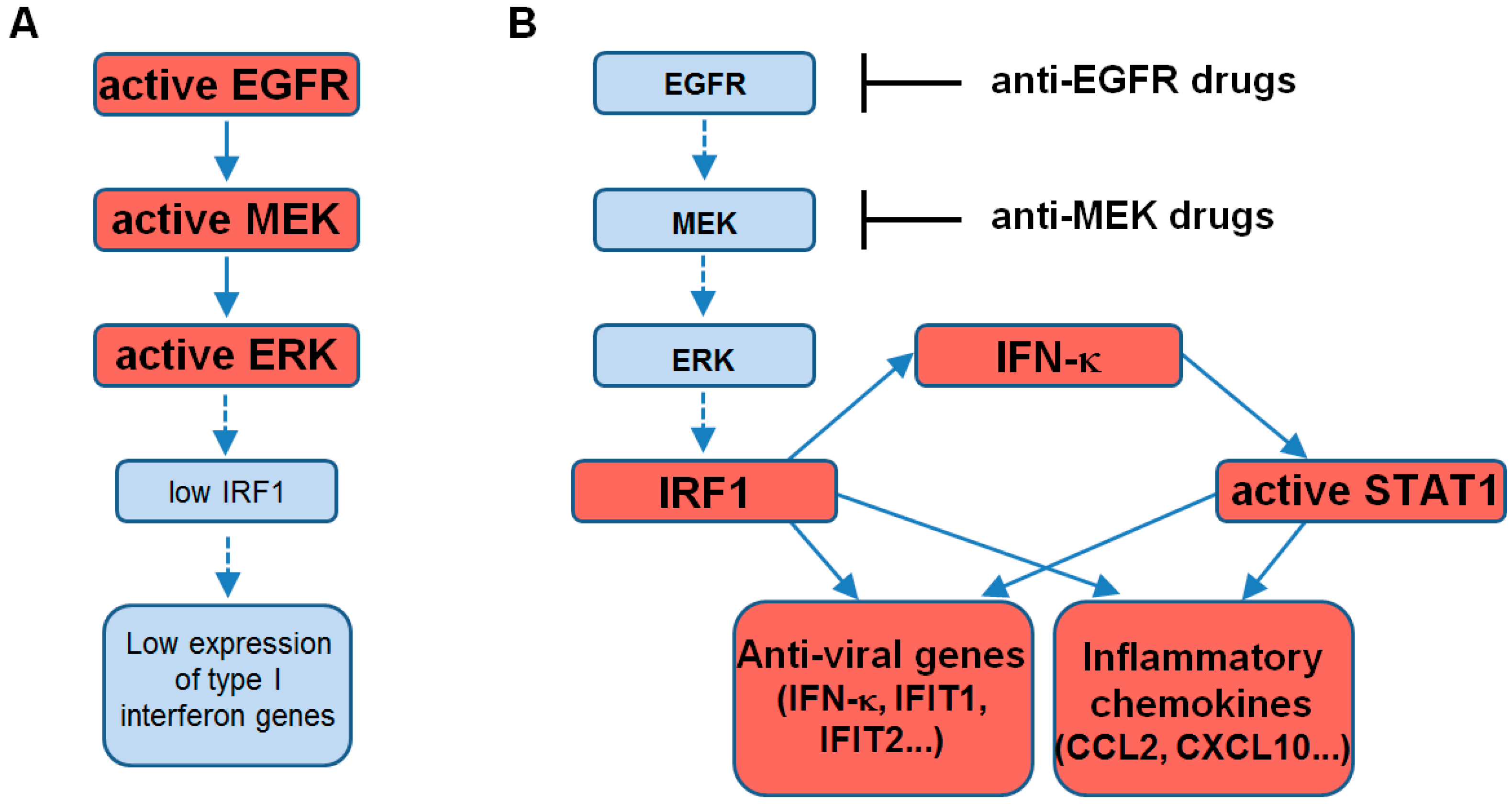