Predicting Amyloidogenic Proteins in the Proteomes of Plants

Amyloids are protein fibrils with characteristic spatial structure. Though amyloids were long perceived to be pathogens that cause dozens of incurable pathologies in humans and mammals, it is currently clear that amyloids also represent a functionally important form of protein structure implicated in a variety of biological processes in organisms ranging from archaea and bacteria to fungi and animals. Despite their social significance, plants remain the most poorly studied group of organisms in the field of amyloid biology. To date, amyloid properties have only been demonstrated in vitro or in heterologous systems for a small number of plant proteins. Here, for the first time, we performed a comprehensive analysis of the distribution of potentially amyloidogenic proteins in the proteomes of approximately 70 species of land plants using the Waltz and SARP (Sequence Analysis based on the Ranking of Probabilities) bioinformatic algorithms. We analyzed more than 2.9 million protein sequences and found that potentially amyloidogenic proteins are abundant in plant proteomes. We found that such proteins are overrepresented among membrane as well as DNA- and RNA-binding proteins of plants. Moreover, seed storage and defense proteins of most plant species are rich in amyloidogenic regions. Taken together, our data demonstrate the diversity of potentially amyloidogenic proteins in plant proteomes and suggest biological processes where formation of amyloids might be functionally important. View Full-Text
Keywords: amyloid; Waltz; SARP; plant; prion; seed storage protein; proteomics; compositionally biased region; amyloidogenic region amyloid; Waltz; SARP; plant; prion; seed storage protein; proteomics; compositionally biased region; amyloidogenic region
►▼ Show Figures 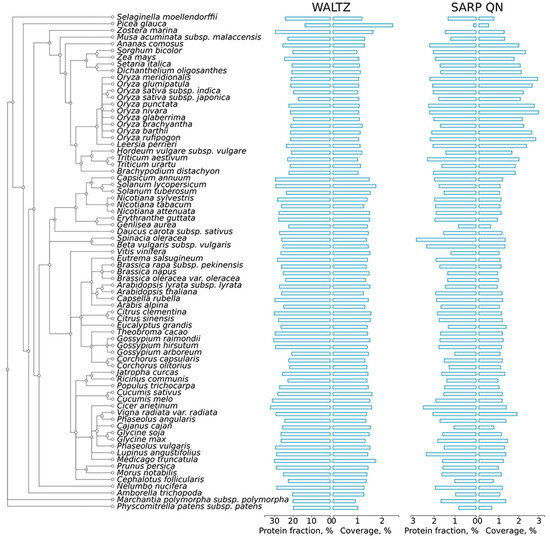