Non-typhoidal Salmonella enterica induces an early, short-lived pro-inflammatory response in chickens that is asymptomatic of clinical disease and results in a persistent colonization of the gastrointestinal (GI) tract that transmits infections to naïve hosts via fecal shedding of bacteria. The underlying mechanisms that control this persistent colonization of the ceca of chickens by Salmonella are only beginning to be elucidated. We hypothesize that alteration of host signaling pathways mediate the induction of a tolerance response. Using chicken-specific kinomic immune peptide arrays and quantitative RT-PCR of infected cecal tissue, we have previously evaluated the development of disease tolerance in chickens infected with Salmonella enterica serovar Enteritidis (S. Enteritidis) in a persistent infection model (4–14 days post infection). Here, we have further outlined the induction of an tolerance defense strategy in the cecum of chickens infected with S. Enteritidis beginning around four days post-primary infection. The response is characterized by alterations in the activation of T cell signaling mediated by the dephosphorylation of phospholipase c-γ1 (PLCG1) that inhibits NF-κB signaling and activates nuclear factor of activated T-cells (NFAT) signaling and blockage of interferon-γ (IFN-γ) production through the disruption of the JAK-STAT signaling pathway (dephosphorylation of JAK2, JAK3, and STAT4). Further, we measured a significant down-regulation reduction in IFN-γ mRNA expression. These studies, combined with our previous findings, describe global phenotypic changes in the avian cecum of Salmonella Enteritidis-infected chickens that decreases the host responsiveness resulting in the establishment of persistent colonization. The identified tissue protein kinases also represent potential targets for future antimicrobial compounds for decreasing Salmonella loads in the intestines of food animals before going to market. View Full-Text
Keywords: Salmonella; kinome; interferon-γ; phospholipase c; JAK-STAT pathway Salmonella; kinome; interferon-γ; phospholipase c; JAK-STAT pathway
►▼ Show Figures 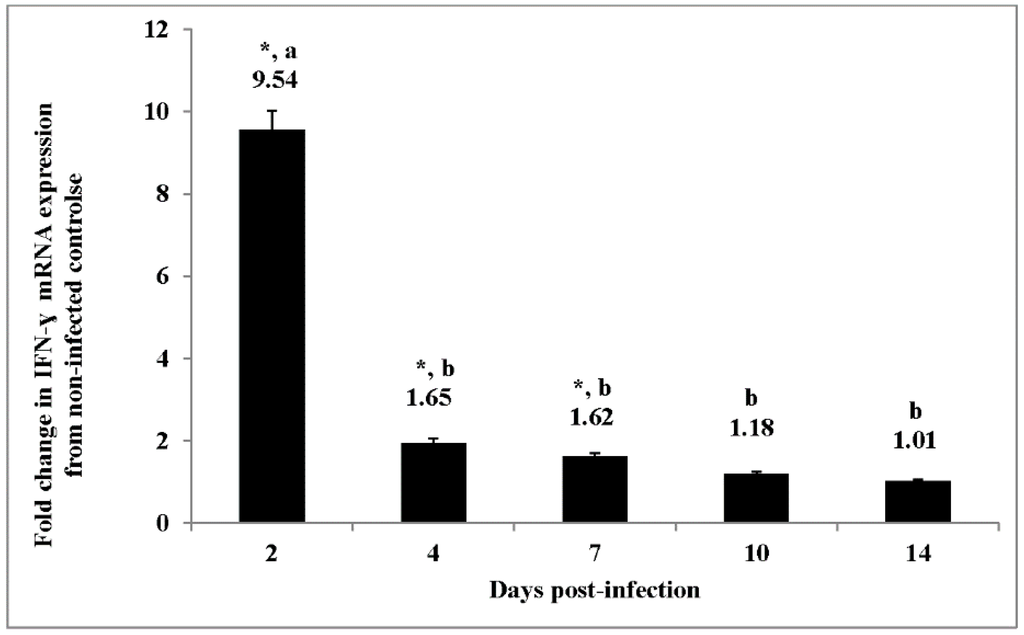