Connecting the Dots: From DNA Damage and Repair to Aging

Type-1 diabetes results from an autoimmune attack of insulin-producing pancreatic β-cells, while type-2 diabetes is mainly due to insulin resistance (IR) [1]. Recent studies have focused on type-2 diabetic nephropathy (T2DN), which is characterized by the development of IR and microalbuminuria (MAU) in the early period [2,3]. IR, an independent risk factor of MAU, has emerged as the direct cause of hyperglycemia in type-2 diabetes [4]. IR may exist with MAU before the onset of diabetes and lead to pathophysiological changes in the kidney [4,5]. Unlike insulin-dependent therapies for type-1 diabetes, the treatment of type-2 diabetes is focused on IR interference to correct hyperglycemia and hyperinsulinemia.
A previous study has reported that the dysregulation of the renin-angiotensin system (RAS) in metabolic syndrome favors type-2 diabetes [6]. Angiotensin II (Ang II) is an important mediator of DN in addition to the effect of high glucose per se. Several lines of clinical and experimental data have also supported the contribution of Ang II to the development of IR, islet β-cell dysfunction and glucose intolerance [7,8,9]. Ang II type 1 receptor (AT1R), as one of the key mediators of Ang II physiological action, is also related to the pathogenesis of IR [10]. Thus, Ang-converting enzyme inhibitor (ACEI) and Ang II type 1 receptor blocker (ARB) are currently the standard treatment for T2DN, the function of which is to diminish proteinuria and promote insulin sensitivity [11,12,13].
Lipoxygenases (LO) are a group of non-heme iron enzymes that insert molecular oxygen into 1, 4-cis, cis-pentadiene containing polyunsaturated fatty acids. These are classified as 5-, 8-, 12- and 15-LO, according to the carbon atom of arachidonic acid, in which oxygen is inserted. The activation of 12-LO leads to the formation of oxidized lipids, such as 12(S)-hydroxyeicosatetraenoic acid (12(S)-HETE) [14,15,16]. The 12-LO along with 12(S)-HETE have been reported to play critical roles in renal disorders [10,17,18,19,20,21].
Recently, several studies have demonstrated that the upregulation of AT1R in kidneys is associated with the 12-LO pathway and 12(S)-HETE [20,21]. Furthermore, 12-LO has also been shown to play important roles in the development of DN [22,23]. Nunemaker et al. discovered that 12-LO contributes to high fat diet-induced IR in mice [24]. A previous study also revealed that 12-LO participates in β-cell de-differentiation in human islets [25]. The 12-LO also plays important roles in metabolic stress-induced dysfunction in islet β-cells, and 12-LO activity in the islet itself is sufficient to induce whole-body glucose intolerance under conditions of high fat diet consumption [26,27]. High fat-fed 12-LO knockout mice demonstrated reduced IR and decreased macrophage infiltration into adipose tissues [28]. The expression of AT1R was upregulated in type-2 diabetic glomeruli [20], but downregulated in type-1 diabetic glomeruli [29]. Interestingly, the inhibition of 12-LO could evidently ameliorate MAU in type-2 diabetic animal models [18], but this inhibition could not reduce MAU under type-1 diabetic conditions [22]; however, the underlying mechanism remains unelucidated. Given that IR is the major distinction between type-1 and type-2 diabetes, we hypothesized that 12-LO inhibition may ameliorate T2DN proteinuria and decrease AT1R expression by interfering with IR.

2.1. Roles of 12-LO on Fasting Blood Glucose and MAU in Type-1 Diabetic Models

In order to investigate the impact of 12-LO on fasting blood glucose level and MAU, streptozotocin (STZ) was first employed to Sprague-Dawley rats and 12-LO knockout C57BL/6 (12-LOKO) mice, as well as wild-type C57BL/6 (WT) mice to induce type-1 diabetes. Rats or mice that failed to develop hyperglycemia were excluded from this study. As shown in Figure 1a, fasting blood glucose levels in WT + STZ significantly increased compared to LOKO + STZ (p < 0.01) at the second and third week after STZ administration. Although fasting blood glucose of LOKO + STZ was slightly lower compared to WT + STZ during the fourth–sixth week, no significant difference was detected between these two groups; suggesting that the deletion of 12-LO slightly protected STZ-induced hyperglycemia in the early stage of diabetes. 12-LO inhibitor, cinnamyl-3,4-dihydroxy-α-cynanocinnamate (CDC), treatment slightly decreases blood glucose in STZ-induced type-1 diabetic rats compared to non-treated type-1 diabetic rats at the second and third week after STZ administration, but this did not reach statistical significance (Figure 1b). These results suggest that 12-LO inhibition may slightly decrease STZ-induced hyperglycemia for a short time by β-cell protection; nonetheless, this protective effect was gradually overcome by the destructive effect of STZ.
Figure 1c revealed that MAU significantly increased in WT + STZ and LOKO + STZ mice compared to WT mice and LOKO mice, respectively (p < 0.01), and the levels of MAU in LOKO + STZ and WT + STZ mice were similar; suggesting that 12-LO knockout could not prevent STZ-induced MAU elevation. Similarly, the level of MAU significantly increased in type-1 diabetic rats compared to the control (p < 0.01, Figure 1d); and CDC treatment did not ameliorate type-1 diabetes-induced MAU.

2.3. Roles of 12-LO on IR-Related Parameters in Type-2 Diabetic Rats

2.4. Effect of 12(S)-HETE on Rat Blood Glucose and Blood Pressure

In order to further evaluate the roles of 12-LO, the direct effect of 12(S)-HETE on Ang II level in rat glomeruli was examined. Rats were given a subcutaneous infusion of 12(S)-HETE with osmotic mini-pumps for seven days. Glomerular Ang II content and Ang I/II expression were determined by ELISA and Western blot, respectively. As shown in Figure 4a, the administration of 12(S)-HETE significantly increased glomerular Ang II content compared to the vehicle alone (p < 0.01). Similarly, by Western blot, it was revealed that 12(S)-HETE treatment upregulated Ang I/II levels in glomeruli compared to the control (p < 0.01; Figure 4b). Next, the effect of 12-LO on Ang II level was detected under diabetic conditions. The content of Ang II (Figure 4c) and Ang I/II (Figure 4d) in glomeruli was higher in type-2 diabetic rats compared to control rats (p < 0.01). As expected, CDC treatment significantly decreased Ang II content and Ang I/II expression, compared to those without CDC treatment (p < 0.05). These results suggest that Ang II level in glomeruli was activated in type-2 diabetic rats, and this activation was partially attenuated by 12-LO inhibition.

2.6. 12(S)-HETE Induced the Expression of AT1R and AT1R-Associated Protein in Rat Mesangial Cells and Glomeruli

Next, the direct effects of 12(S)-HETE on glomerular AT1R levels were assessed by quantitative competitive transcription-polymerase chain reaction (RT-PCR). An AT1R deletion mutant co-amplified with the endogenous gene was used as the internal control (Figure 5a). As shown in Figure 5b, a significant increase in glomerular AT1R mRNA expression was observed in rats with 12(S)-HETE infusion compared to the control (p < 0.01), indicating that 12(S)-HETE could directly increase AT1R expression. Similarly, a significant increase in AT1R protein level was observed in rat glomeruli following 12(S)-HETE infusion compared to the control (Figure 5c). ATRAP functions as a molecular Ang II-induced transduction signal by enhancing AT1R internalization. Interestingly, glomerular ATRAP protein expression was significantly reduced after 12(S)-HETE infusion (Figure 5c).
In order to examine the possible signal pathway of 12(S)-HETE, serum-depleted MCs were treated with 12(S)-HETE (10−7 mol/L) with or without p38 mitogen-activated protein kinase (MAPK) inhibitor SB202190 (10−6 mol/L). The 12(S)-HETE stimulation alone significantly decreased ATRAP protein expression compared to the control (p < 0.01). In the presence of SB202190, 12(S)-HETE-induced ATRAP reduction was clearly attenuated (p < 0.05; Figure 5d), indicating that the p38 MAPK pathway was involved in mediating the 12-LO induced decrease in ATRAP.

In order to investigate the role of 12-LO activation and insulin on AT1R expression, MCs were treated with 12(S)-HETE (10−7 mol/L) and/or insulin (10−6 mol/L) for 24 h. As shown in Figure 6, although both 12(S)-HETE and insulin significantly increased AT1R protein levels in rat MCs (p < 0.01), the combination of 12(S)-HETE and insulin demonstrated a synergetic effect on AT1R upregulation, compared to each sole stimulation alone (p < 0.05; Figure 6).

2.8. Effect of 12-LO on AT1R and ATRAP Expression in Glomeruli of Diabetic Rats

Twenty male Sprague-Dawley rats weighing 180–200 g were used in this study. The rats were randomly assigned to receive vehicle (normal saline or ethanolamine; n = 10) or 12(S)-HETE (infusion rate, 1 mg/kg/day; n = 10) by osmotic mini-pumps. The dose of 12(S)-HETE was based on our previous study [21]. The mini-pumps infused 12(S)-HETE and ethanolamine (control) continuously for seven days. Systolic blood pressure was measured by tail-cuff plethysmography, and blood glucose was measured by glucometer daily. Then, rats were sacrificed, and glomeruli were isolated and stored at −70 °C for further study.

The plasma membrane from glomeruli was specifically extracted from tissues using a Plasma Membrane Extraction Kit (Pierce, Rockford, IL, USA), according to the manufacturer’s protocol. Glomeruli were isolated by sieving, based on a previous study [48]. The purity of the glomerular preparation was >98%, as determined by light microscopy.

Glomeruli were lysed in sodium dodecyl sulfate (SDS) sample buffer. Lysates were centrifuged at 12,000 rpm for 15 min at 4 °C, and the supernatant was stored at −70 °C. Protein content was measured with the modified Lowry method. 12(S)-HETE and Ang II levels were quantified by ELISA using a commercial kit according to the manufacturer’s instructions.

Total RNA from glomeruli was extracted using RNA STAT-60 reagent, according to the manufacturer’s instructions; and cDNA was synthesized with 1 μg of RNA using MuLV RT and random hexamers. Sense (5′-GAAGCTGAAGACTGTGGC-3′) and antisense (5′-GCTGGCAAACTGGCCAAG-3′) primers were used to amplify AT1R (317 bp). The AT1R competitor cDNA (212 bp) was used as the internal standard. The AT1R competitor cDNA (a portion of the cDNA was deleted) was designed with the same sequence as the target cDNA to enable efficient priming. For AT1R mRNA expression levels, competitive RT-PCR was used, as previously described [20]. PCR products were separated on agarose gels and stained with ethidium bromide. RNA quantity was expressed relative to the competitor fragments.

In order to perform PAS staining, renal cortical slices were fixed in 10% neutral buffered formalin prior to paraffin embedding, processed in the standard manner, and 5 μm sections were utilized. Slides were deparaffinized, hydrated and oxidized with periodic acid for 12 min. After washing, the slides were stained with Schiff dye for 20 min and counterstained with hematoxylin for one minute. Glomeruli were examined via light microscopy at 400× magnification. Glomerular volume (VG) was calculated using a computer-assisted color image analyzer Image-Pro (Version 2.0; Media Cybernetics, Silver Spring, MD, USA) according to the method of Weibel [49]. VG = β/k × (area)3/2, where β = 1.38 (the shape coefficient for the spheres) and k = 1.1 (the size distribution coefficient).

Statistical analysis was performed with PRISM software (Graph Pad, San Diego, CA, USA). Paired Student’s t-tests were used to compare two groups or ANOVA with Dunnett’s post-test for multiple groups. All data are presented as the mean ± SD. A p-value of <0.05 was considered to indicate statistically-significant differences.

This project was supported by the National Natural Science Foundation of China (Nos. 81070578 and 81270809) and the Graduate Innovation Fund of Jilin University (No. 2015032). The authors are thankful to Rama Natarajan (Gonda Diabetes Research Center, Beckman Research Institute of the City of Hope, Duarte, CA, USA) and Shin-Wook Kang (Yonsei University College of Medicine, Department of Internal Medicine, Seoul, Korea) for their kind guidance. 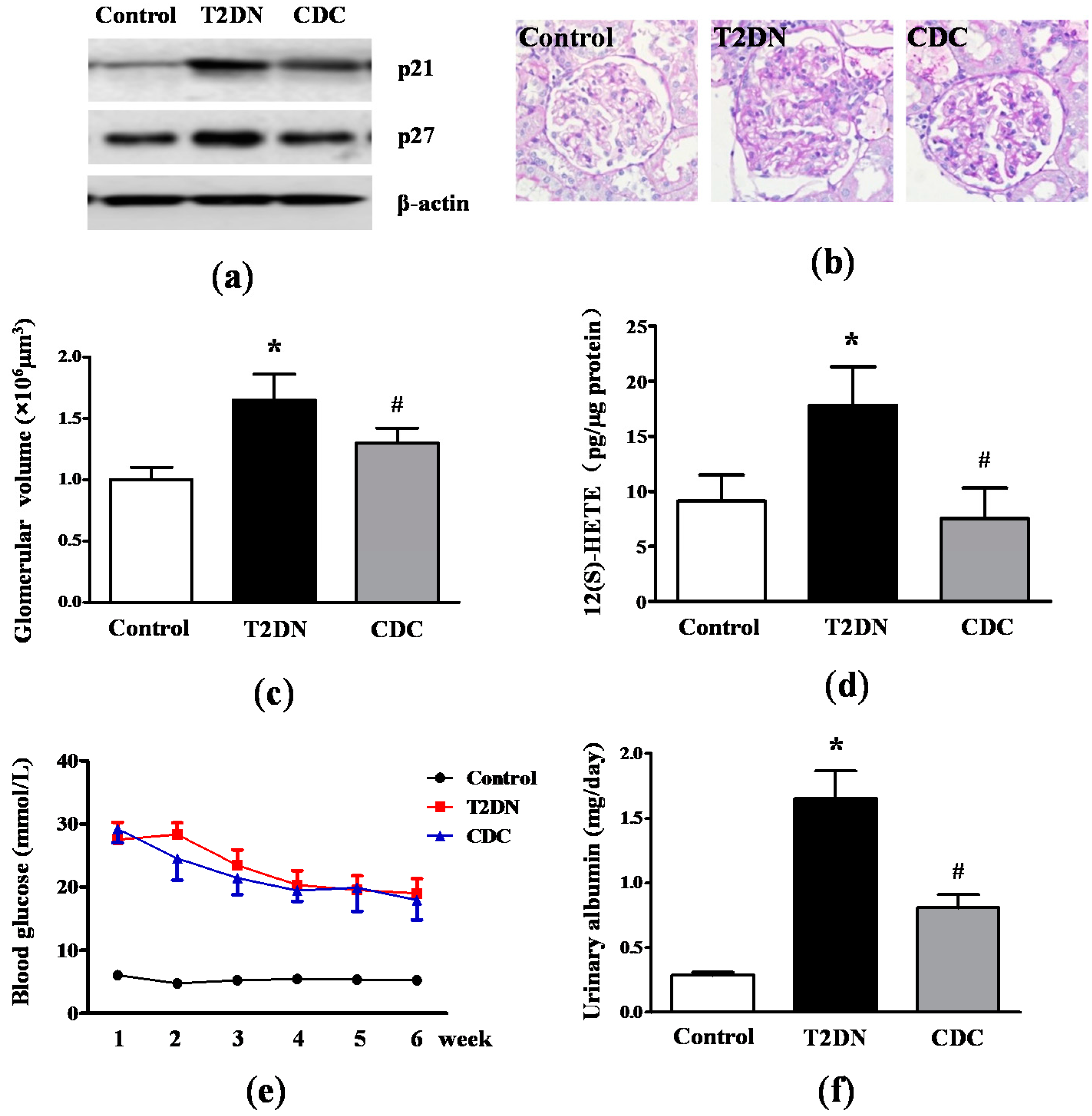 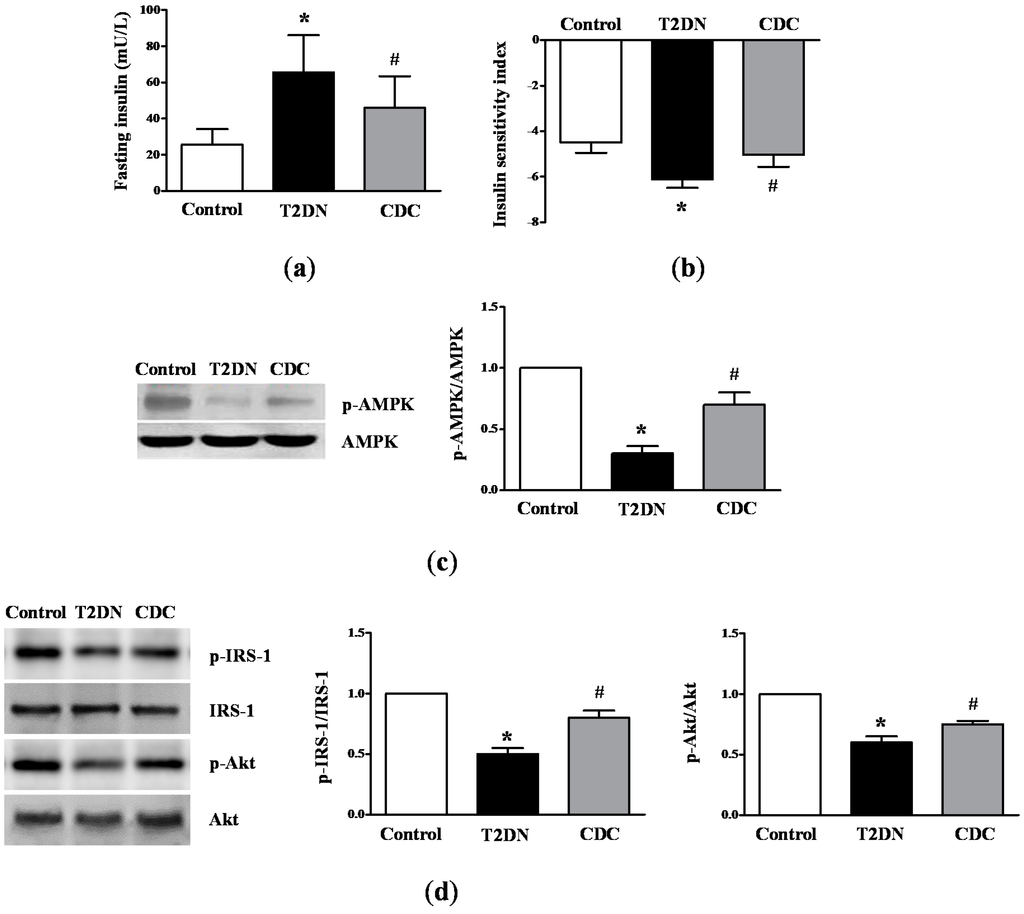 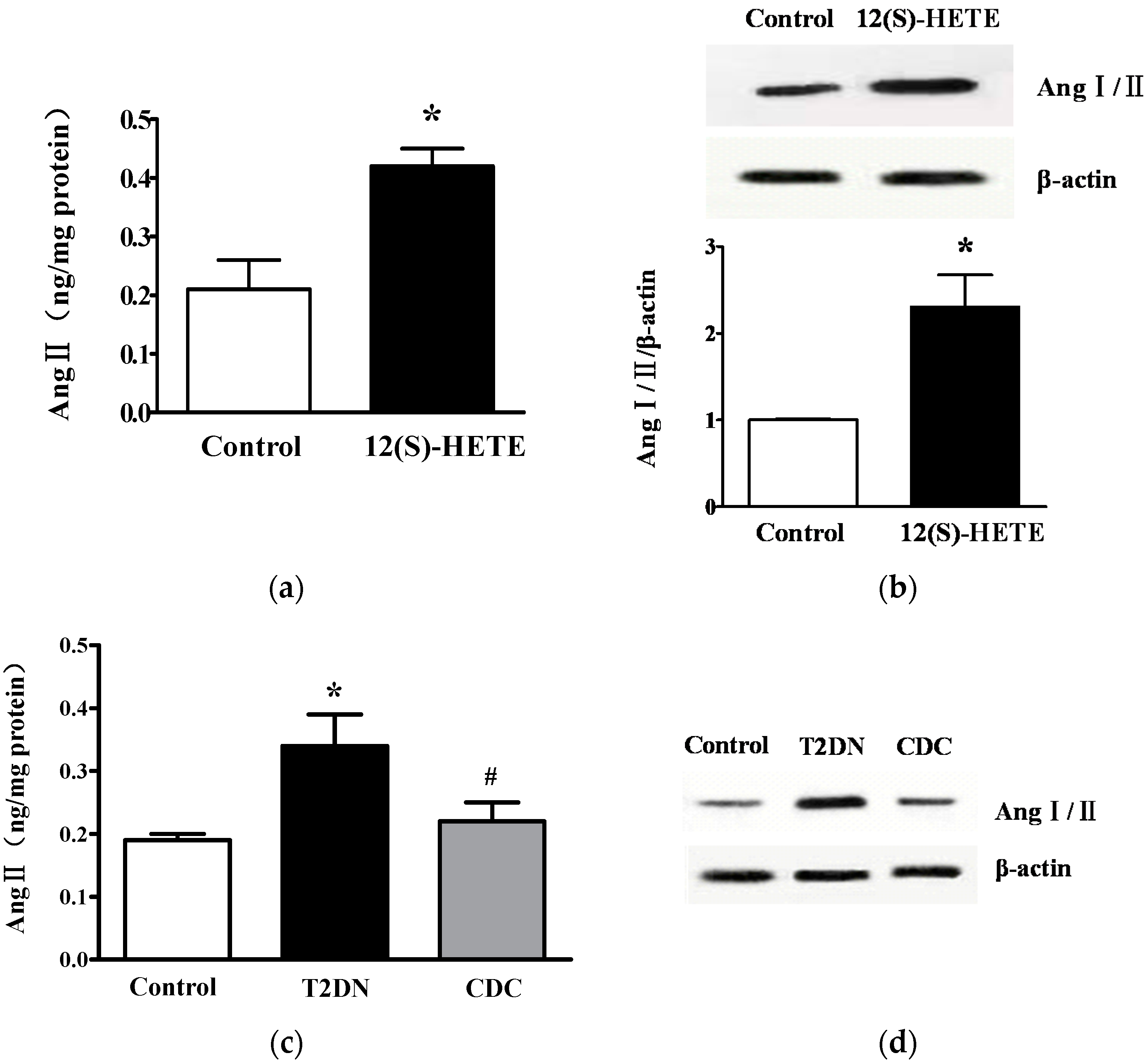