Antiallergic Phorbol Ester from the Seeds of Aquilaria malaccensis

Imunoglobulin E (IgE)-mediated allergy is a common immune system disorder affecting approximately 235 million people worldwide, particularly the population in developed countries [1]. Although today we are able to treat the symptoms of allergy, available medications have undesirable effects, especially with a prolonged use. Therefore, there is a need to search for alternative treatment. In general, some natural sources are considered as safe and easily available. Mast cells and their degranulation play a crucial role in IgE-mediated allergic inflammatory responses, such as allergic rhinitis, acute asthma, and atopic eczema [2]. β-Hexosaminidase is an enzyme released along with histamine from mast cells (rat basophilic leukemia cells, RBL-2H3 cells) upon activation and serves as a well-accepted in vitro model in allergy [3].
Agarwood is a priceless fragrant resinous wood from the Aquilaria species (Thymelaeaceae), which is formed as a defense mechanism to fend off pathogens. Agarwood is widely used in religious, aromatic, and medicinal preparations [4,5]. Aquilaria species has been traditionally used in Thai [6] and Korean [7] medicine, in the Ayurvedic practice, as well as traditional Chinese medicine to treat various diseases, particularly the diseases associated with inflammation [8]. Agarwood from the Aquillaria species has been used as cardiotonic, carminative, antiasthmatic, aphrodisiac, astringent remedy, and has been found effective against diarrhea, dysentery, gout, rheumatism, paralysis, and parasites, and it has been beneficial for skin diseases [9]. The Aquilaria species was previously found to possess antidepressant [10,11], antineuroinflammatory [12], analgesic, antiinflammatory [13], antioxidant, antibacterial [6], antihyperglycemic in vivo [14], and laxative activity in vivo [15].
Aquilaria malaccensis Lam. (syn. Aquilaria agallocha Roxb.) (Thymelaeaceae) is a tropical tree native to Malaysia, locally known as “Karas”. It is distributed in the rainforests of Indonesia, Thailand, Cambodia, Laos, Malaysia, Philippines, and India [16]. The alcoholic extract of A. malaccensis stems and bark exhibited cardiotonic activity [17], and cytotoxicity against Eagle’s carcinoma of the nasopharynx and P-388 lymphocytic leukemia cells in vitro [18]. The aqueous extract showed antitrypanosomal [19], antibacterial [20], and antiallergic activity in vitro and in vivo [7]. The study on the composition of agarwood from A. malaccensis utilizing gas chromatography-mass spectrometry (GC-MS) revealed the presence of chromones, aromatic compounds, sesquiterpenes, monoterpenes, steroids and fatty acids [21]. In a previous phytochemical investigation, feruryl glyceride and phorbol ester were isolated from A. malaccensis bark [18].
However, there was no investigation reporting on composition and bioactivity of A. malaccensis seeds (AMS).
In the current study, we investigated antiallergic, antiinflammatory, and cytotoxic activities of AMS extract and its fractions. Within a project of continuous screening for active natural products, AMS showed strong antiallergic effect with an IC50 value less than 1 µg/mL in degranulation assay. Therefore, a phytochemical investigation of AMS was undertaken through a bioactivity-guided fractionation approach. The active components of the most active fraction were further defined as a mixture of phorbol esters, and, moreover, the new active phorbol ester possessing polyunsaturated fatty acid (1) was isolated.

The preliminary bioactivity screening of AMS ethanolic extract (A-EtOH) showed potent antiallergic (IC50 0.92 and 3.9 µg/mL in A23187 and antigen-induced β-hexosaminidase assay, respectively) (Table 1), and antiinflammatory activities (90.1% and 85.3% inhibition of superoxide generation and elastase release at 10 µg/mL, respectively) (Table 2). All partitioned fractions except water layer displayed significant antiallergic and antiinflammatory activities (A-BuOH, A-EtOAc, A-Hexane, A-MeOH).
The effects of the AMS samples on degranulation in both A23187- and antigen-induced β-hexosaminidase assays were dose-dependent (Tables S1 and S2). To clarify that antiallergic activity of the samples was due to inhibition of β-hexosaminidase release, and not false positive as a result of direct inhibition of β-hexosaminidase enzymatic activity [22], the enzyme was extracted and tested with the active samples. None of the samples inhibited the enzymatic activity of β-hexosaminidase (Table 1).
As the methanol layer proved the best antiallergic activity (IC50 0.0089 and 0.069 µg/mL in A23187 and antigen-induced degranulation assay, respectively), it was further separated using silica gel column chromatography to yield six fractions, AM1–AM6 (subfractions of methanol layer from Aquilaria malaccensis seeds). Among them, fraction AM4 showed the most remarkable antiallergic activity inhibiting β-hexosaminidase release from mast cells induced by either A23187 (IC50 0.0034 µg/mL) or antigen (IC50 value 0.0065 µg/mL).
In cytotoxicity assay against a panel of three cancer cell lines (human hepatocellular carcinoma cells HepG2, human breast adenocarcinoma cells A549, and human lung adenocarcinoma cells MDA-MB231), only some of the AMS fractions showed cytotoxic activities at a 20-µg/mL level (Table 3) (A-BuOH 57.1% against A549, AM4 56.5% against MDA-MB231 and 79.3% against A549, AM6 56.0% against MDA-MB231 cell line). Moreover, considering weak cytotoxicity of AMS towards RBL-2H3 cells, the antiallergic active fraction AM4 exerted therapeutic index up to 28,000. To further rule out the possibility that AM4 causes direct mast cell activation, we examined the capacity of AM4 to elicit degranulation by itself. Results showed that the AM4 treatments did not cause significant degranulation as compared with untreated control (Figure 1). These data implied that AM4 is the best target for further phytochemical analysis.

In degranulation assay, aquimavitalin (1) showed significant β-hexosaminidase release-inhibitory activity with IC50 values of 0.0017 µM (therapeutic index 71,538) using A23187 as an inducer and 0.011 µM (therapeutic index 10,550) using antigen as an inducer. Aquimavitalin (1) did not inhibit β-hexosaminidase enzymatic activity (Table 1), neither trigger the degranulation of unstimulated mast cells (Figure 1). According to our results, phorbol ester-rich fractions (AM4-4, AM4-4-8) showed stronger activity (up to pg/mL level) than a pure compound. This phenomenon may be a result of synergistic effects of phorbol esters in the mixture.
In general, phorbol esters, particularly phorbol-12-myristate-13-acetate (PMA), are well-known as irritant, proinflammatory and cocarcinogenic. Nevertheless, phorbol esters were previously reported to exert antiinflammatory, anti-HIV, antiparasitic and anticancer activities [26]. Both free C-20 hydroxy, and C-12 and/or C-13 ester moieties were important for the activities of phorbol esters [26]. Importantly, it was suggested that unsaturation of ester functionality may play a crucial role in bioactivity of phorbols [26,27]. Previously, 12-O-(2Z,4E,6E)-deca-2,4,6-trienoylphorbol-13-acetate, a phorbol ester possessing similar conjugated fatty acid moiety as 1, was isolated from A. malaccensis bark and exerted cytotoxic activity in P-388 lymphocytic leukemia cells in vitro [18]. In structure-activity relationship study on phorbol esters containing fatty acids with different level of unsaturation and carbon chain length, phorbol esters carrying conjugated unsaturated fatty acid as acyl group showed irritant but very weak tumor-promoting activities. [27]. This is the first study to report on the antiallergic potential of pure phorbol ester with the therapeutic index up to 71,000. The antiallergic activity of AMS together with identification of its active component provides scientific support for the folk use of A. malaccensis against asthma.

The mucosal mast cell-derived rat basophilic leukemia (RBL-2H3) cell line was purchased from the Bioresource Collection and Research Center (Hsin-Chu, Taiwan). Cells were grown in DMEM medium supplemented with 10% FBS and 100 U/mL penicillin plus 100 μg/mL streptomycin. Cells were cultured in 10 cm cell culture dishes at 37 °C in a humidified chamber with 5% CO2 in air.

A methylthiazol tetrazolium (MTT) assay was used to measure the potential toxic effects of the samples on RBL-2H3 cells [28]. Briefly, RBL-2H3 cells (2 × 104 cells/well) were seeded in a 96-well plate overnight and treated with various concentrations of samples (10–100 μg/mL) for 24 h. MTT solution (0.5 mg/mL) was added to the wells (80 μL per well) and incubated for 1 h. The formed formazan crystals were dissolved in DMSO (80 μL). The absorbance at 595 nm was measured using microplate reader (Multiskan Ascent, Thermo Scientific, Waltham, MA, USA). The degree of cell viability of each sample was calculated as the percentage of control value (untreated cells). The maximal tolerated dose of DMSO was 0.5%. All experiments were repeated at least two times.

3.7. Degranulation β-Hexosaminidase Assay Induced by A23187 or Antigen

The degree of A23187- and antigen-induced degranulation in RBL-2H3 cells was determined by a β-hexosaminidase release assay as described previously [28,29] with following modifications. RBL-2H3 cells were seeded in a 96-well plate (2 × 104 cells/well) for A23187-induced and in 48-well plate (3 × 104 cells/well) for antigen-induced experiment. Cells were treated with various concentrations of the samples for 20 h. Dexamethasone (10 nM) was used as a positive control. The cells for the antigen-induced experiment were first sensitized with anti-DNP IgE (5 μg/mL) for at least 2 h. After thorough washing by pre-warmed Tyrode’s buffer (135 mM NaCl, 5 mM KCl, 1.8 mM CaCl2, 1.0 mM MgCl2, 5.6 mM glucose, 20 mM HEPES at pH 7.4), the cells were stimulated by either calcium ionophore A23187 (1 μM) or antigen DNP-BSA (100 ng/mL) in Tyrode’s buffer for 1 h. Unstimulated cells were either lysed with 0.5% Triton X-100 solution for the total amount of β-hexosaminidase release or left untreated for spontaneous release of β-hexosaminidase. Then aliquots of supernatants (50 μL) were incubated with equal volume of 1 μM of p-NAG (50 μL) prepared in 0.1 M citrate buffer (pH 4.5) serving as a substrate for the released β-hexosaminidase. After 1 h of incubation at 37 °C, the reaction was quenched by the addition of 100 μL of stop buffer (0.1 M Na2/NaHCO3, pH 10.0). Absorbance was measured at 405 nm on a microplate reader (Multiskan Ascent, Thermo Scientific). The inhibition percentage of β-hexosaminidase release was calculated as the percentage of control value (untreated stimulated cells). The maximal tolerated dose of DMSO was 0.5%. All experiments were repeated three times.

3.8. Effect on Enzymatic Activity of β-Hexosaminidase

To test the possible effect of the sample on enzymatic activity, following assay was performed. The cell suspension (2 × 106 cells) in 2 mL of Tyrode’s buffer was sonicated for 5 min. The solution was then centrifuged, and the supernatant was diluted with 8 mL of Tyrode’s buffer. The enzyme solution (45 µL) and test sample solution (5 µL) were transferred into a 96-well microplate and enzyme activity was examined as described above (Section 3.7). All experiments were repeated three times.

The degree of β-hexosaminidase release triggered by the sample in RBL-2H3 cells was determined by a modified β-hexosaminidase release assay. Briefly, RBL-2H3 cells (4 × 104 cells/well) were seeded in a 48-well plate and treated with the samples for 10 h. Tyrode’s buffer supplemented with 5.6 mM glucose, 2 mg/mL BSA and 2 mM glutamine was used to prepare the samples and treat the cells. Then, 50 μL of supernatants were transferred into a 96-well microplate and examined as described above (Section 3.7). A23187 (1 µM) was used as a positive control. All experiments were repeated three times.

Human neutrophils from venous blood of healthy, adult volunteers (20–30 years old) were isolated using a standard method of dextran sedimentation prior to centrifugation in a Ficoll-Hypaque gradient and hypotonic lysis of erythrocytes [30]. Purified neutrophils containing >98% viable cells, as determined by the trypan-blue exclusion method [31], were resuspended in a Ca2+-free Hank’s buffered salt solution (HBSS) at pH 7.4 and were maintained at 4 °C prior to use.

The present investigation revealed bioactive fractions and pure principle from the extract of AMS. It resulted in the isolation of the active pure compound, aquimavitalin (1). The remarkable inhibitory activity of 1 on mast cell degranulation with nanomolar IC50 values provides evidence that phorbol ester could possess antiallergic activity.
Moreover, high potency of phorbol esters may shed light on the use of A. malaccensis seeds in the treatment diseases related to allergy. However, further studies are needed to examine the safety of these materials in therapy. 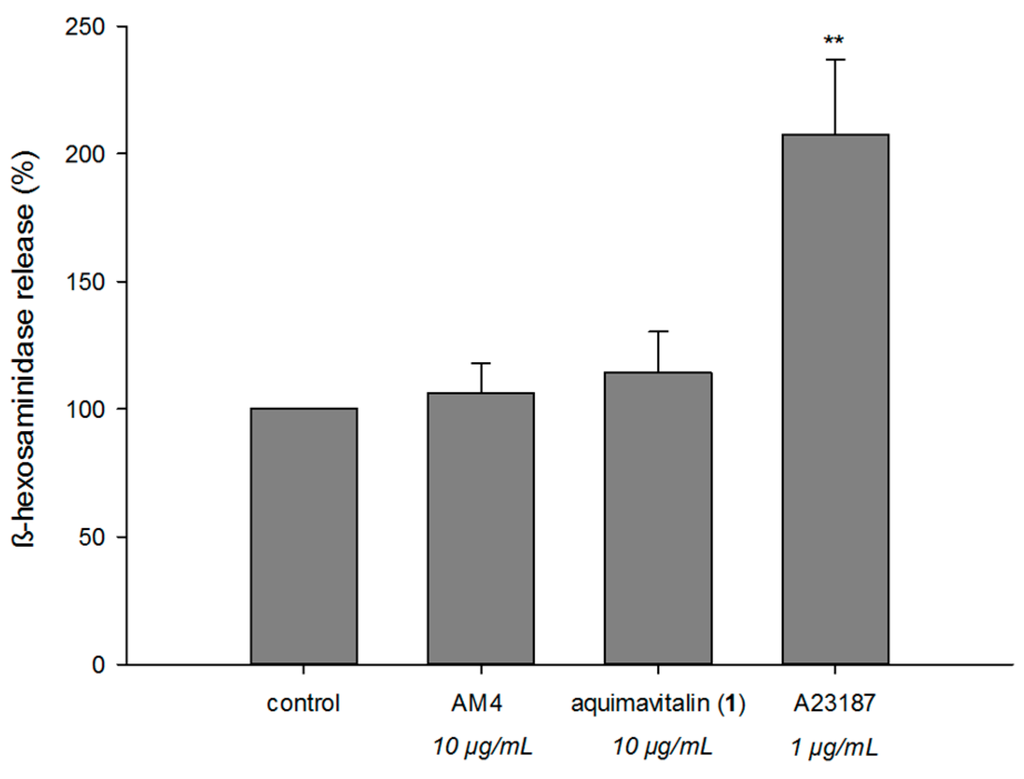 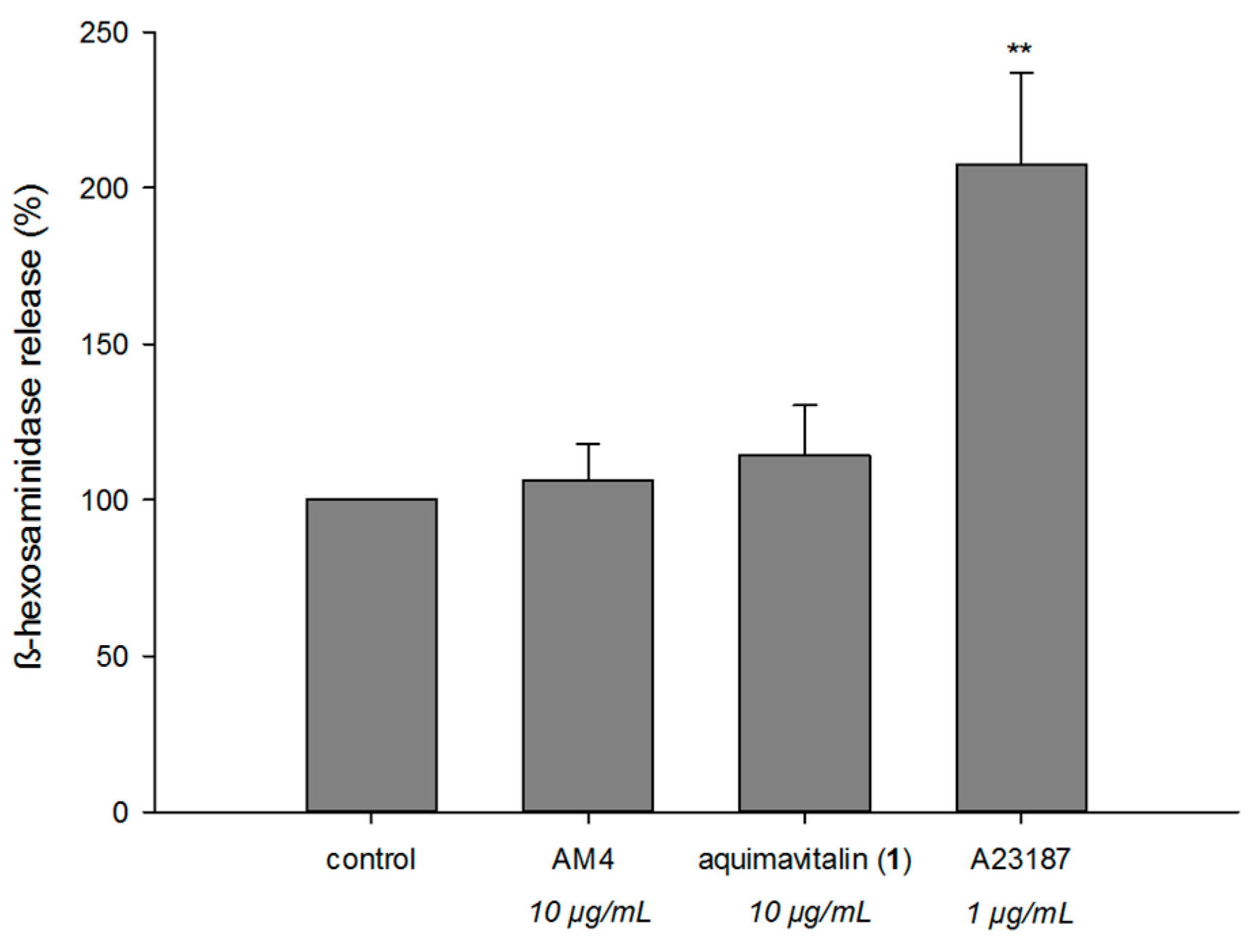 Table 2. Antiinflammatory effects of A. malaccensis seeds extracts on superoxide anion generation and elastase release in fMLP/CB-induced human neutrophils a.
a Percentage of inhibition (Inh %) at 10 µg/mL concentration; results are presented as mean ± SEM (n = 3–4); * p < 0.05, ** p < 0.001 compared with the control value (formyl-methionyl-leucyl-phenylalanine/cytochalasin B, fMLP/CB).