Impact of Prematurity and Perinatal Antibiotics on the Developing Intestinal Microbiota: A Functional Inference Study
Previous Article in Journal

Taiwan has been recognized by the World Organization for Animal Health as rabies-free since 1961. Surprisingly, rabies virus (RABV) was identified in a dead Formosan ferret badger in July 2013. Later, more infected ferret badgers were reported from different geographic regions of Taiwan. In order to know its evolutionary history and spatial temporal dynamics of this virus, phylogeny was reconstructed by maximum likelihood and Bayesian methods based on the full-length of glycoprotein (G), matrix protein (M), and nucleoprotein (N) genes. The evolutionary rates and phylogeographic were determined using Beast and SPREAD software. Phylogenetic trees showed a monophyletic group containing all of RABV isolates from Taiwan and it further separated into three sub-groups. The estimated nucleotide substitution rates of G, M, and N genes were between 2.49 × 10−4–4.75 × 10−4 substitutions/site/year, and the mean ratio of dN/dS was significantly low. The time of the most recent common ancestor was estimated around 75, 89, and 170 years, respectively. Phylogeographic analysis suggested the origin of the epidemic could be in Eastern Taiwan, then the Formosan ferret badger moved across the Central Range of Taiwan to western regions and separated into two branches. In this study, we illustrated the evolution history and phylogeographic of RABV in Formosan ferret badgers. View Full-Text
Keywords: rabies virus; phylogeographic; Formosan ferret badgers rabies virus; phylogeographic; Formosan ferret badgers
►▼ Show Figures 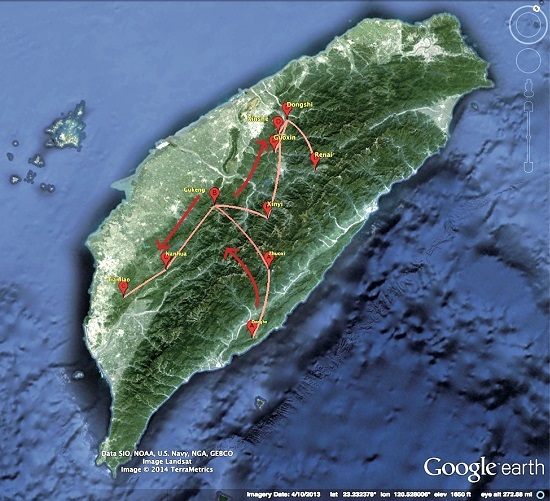