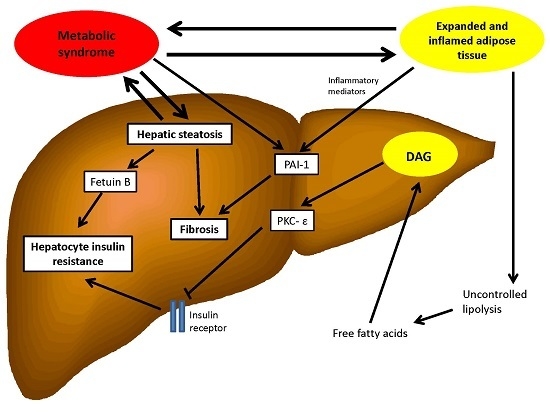 2. Association between NAFLD and Components of the Metabolic Syndrome

There have been various diagnostic criteria available for the diagnosis of metabolic syndrome, and these have changed subtly over recent years. The most commonly used criteria are those published by the International Diabetes Federation in 2009. It should be noted that these most recent criteria advocate using population- and country- specific definitions for abdominal obesity [10]. Table 1 outlines the various diagnostic criteria available.
NAFLD can occur in individuals who are not obese [11,12], however this is more unusual and generally NAFLD is closely related to increased central adiposity. NAFLD is commonly associated with all of the component features of the metabolic syndrome, and nearly two thirds of people with obesity and type 2 diabetes demonstrate hepatic steatosis [13,14]. One study identified hepatic steatosis via ultrasonography in 50% of patients with hyperlipidaemia [15]. NAFLD is also associated with arterial hypertension and cross-sectional studies have demonstrated that approximately 50% of people with essential hypertension also have NAFLD [16,17]. Importantly, in those people with NAFLD the presence of multiple features of the metabolic syndrome is associated with more severe liver disease and a higher likelihood of progression to NASH and cirrhosis [18,19].

3. NAFLD as a Risk Factor for and Precursor to the Metabolic Syndrome

4. Metabolic Syndrome as an Initiating or Aggravating Factor for Liver Disease

In addition to the evidence from the literature that NAFLD may predispose individuals to developing or worsening insulin resistance and the metabolic syndrome, there is also growing evidence that insulin resistance may contribute to progressive liver damage.
Of particular interest is the role played by plasminogen activator inhibitor 1 [49]. PAI-1 is a member of the serine protease inhibitor family, and acts as a key mediator in the fibrinolytic system. In tissues with a significant degree of fibrosis, concentrations of PAI-1 are elevated leading to an inhibition of tissue proteolytic activities, a decreased rate of collagen degradation and increased tissue fibrogenesis [49]. Increased PAI-1 levels are associated with obesity, insulin resistance, type 2 diabetes and dyslipidaemia [50,51]. Specifically it has been shown that PAI-1 concentrations measured in subcutaneous adipose tissue biopsy samples from individuals with nascent metabolic syndrome are significantly higher than those in control samples [52]. It has also been observed in a human hepatocyte cell line that tumour necrosis factor α (TNF-α) is able to induce the expression of PAI-1, leading to increased hepatic fibrosis and atherosclerosis in insulin-resistant individuals [53]. There is also a wealth of evidence in the literature regarding the role of PAI-1 in initiating and perpetuating hepatic fibrosis [49]. As such this provides evidence of a causative role for insulin resistance and obesity in the generation of ongoing hepatic fibrosis.
In addition to this, there is evidence that other inflammatory cytokines originating from white adipose tissue as a result of obesity and insulin resistance may play a significant role in hepatic fibrosis and inflammation. It has been known for some time that white adipose tissue is not metabolically inert but is a complex organ that can become active in the obese, insulin-resistant state leading to the production of various pro-inflammatory cytokines [54,55]. These cytokines include interleukin-1β (IL-1β), interleukin-6 (IL-6), interleukin-8 (IL-8), interleukin-18 (IL-18), complement component 3 (C3), TNF-α, PAI-1, adiponectin, leptin, resistin, apelin, vaspin and visfatin. There is evidence that these inflammatory mediators could play a role in the progression of liver disease from “simple” steatosis to NASH [56,57], and also that they may stimulate the differentiation of stellate cells in the liver into myofibroblast-like cells resulting in a more fibrogenic environment [58]. IL-1β, IL-6 and TNF-α are traditionally considered to be pro-inflammatory cytokines, and are all thought to play a role in the pathogenesis of NASH and its associated fibrosis [59,60]. More recently it has been suggested that the balance of pro- and anti-inflammatory mediators can lead to alterations in the gut microbiota and that this may have a significant impact on the progression of hepatic steatosis to NASH [61]. It has also been suggested that apoptosis of hepatocytes could be an important factor in liver damage and specifically progression to NASH [62,63]. Recent findings indicate that patients with a higher degree of insulin resistance exhibit greater evidence for apoptosis of hepatocytes in liver biopsy specimens of morbidly obese individuals, and it has been speculated that this may be mediated by inflammatory cytokines [64]. These studies all provide evidence for a causative link between insulin resistance and hepatic damage mediated in part by inflamed, endocrinologically-active adipose tissue.
There is also clinical evidence that insulin resistance and the metabolic syndrome can cause a worsening of liver disease. A retrospective study of 103 individuals with NAFLD examined histological findings from paired liver biopsy specimens with an average interval of 3 years [65]. The authors observed marked variability in the progression of histological features of NAFLD between the 2 time points, but noted that those individuals with diabetes were at higher risk than non-diabetic people for progression of fibrosis. It is also established in the literature that metabolic syndrome and type 2 diabetes are strongly associated with severe liver disease such as cirrhosis and hepatocellular carcinoma [66,67,68,69]. It appears from the literature that individuals with type 2 diabetes and NAFLD combined are at markedly greater risk of more severe liver disease than those with NAFLD alone, and their liver-related mortality is greater.
There are a variety of cross-sectional studies available that demonstrate that metabolic syndrome and its components are associated with an increased risk of NAFLD in a variety of populations including North American [70], Mexican [71], Taiwanese [72] and Japanese [26]. However, given the cross-sectional nature of these studies they do not provide real evidence of a causative link. Of interest is a recent longitudinal prospective cohort study of 15,791 Han Chinese individuals followed up over a 6 years period [73]. They observed 3913 new cases of NAFLD in this population, and risk of incident NAFLD was markedly higher in those with metabolic syndrome. After adjusting for possible confounding factors such as age, diet, sex, smoking status and level of physical activity, the hazard ratio for incident NAFLD was found to be 1.94 (95% confidence intervals 1.78–2.13). The authors also observed that hazard ratios for incident NAFLD increased the more components of the metabolic syndrome were present at baseline, reaching 3.51 (95% confidence intervals 3.15–3.91) when 3 components were present as compared with individuals who exhibited no metabolic syndrome components. Figure 1 summarises the bidirectional relationship between hepatic steatosis and the metabolic syndrome with regards to the various aspects described above.

5. Evidence for a Disconnection between Hepatic Steatosis and Metabolic Syndrome

It is clear from the literature that there is a complicated causal relationship between NAFLD and the metabolic syndrome. NAFLD is considered by many to represent the hepatic manifestation of the metabolic syndrome however rigidly sticking to this dogma does not appreciate the complexity of the relationship. Clearly the two clinical entities share many aspects of their pathophysiology, and insulin resistance is at the centre of both. There is sufficient evidence now for not only reciprocal causality between these disease states, but also each acting as a perpetuating or exacerbating factor for the other.
There are, however, many aspects of the interactions between NAFLD and the metabolic syndrome that are yet to be fully elucidated, and this is clearly demonstrated by the situations where there is an apparent disconnect or dissociation between them. Arguably, the hepatic steatosis that occurs in these situations due to genetic variation and inborn errors of metabolic can be considered a separate clinical entity to that which is associated with insulin resistance and the metabolic syndrome. However, focusing on the mechanisms that underlie these observations of dissociation could prove valuable for identifying new therapeutic targets in metabolic disease.


Wainwright, Patrick, and Christopher D. Byrne. 2016. "Bidirectional Relationships and Disconnects between NAFLD and Features of the Metabolic Syndrome" International Journal of Molecular Sciences 17, no. 3: 367. https://doi.org/10.3390/ijms17030367


Wainwright, Patrick, and Christopher D. Byrne. 2016. "Bidirectional Relationships and Disconnects between NAFLD and Features of the Metabolic Syndrome" International Journal of Molecular Sciences 17, no. 3: 367. https://doi.org/10.3390/ijms17030367