d-Lysergic Acid Diethylamide (LSD) as a Model of Psychosis: Mechanism of Action and Pharmacology

d-Lysergic Acid Diethylamide (LSD) is known for its hallucinogenic properties and psychotic-like symptoms, especially at high doses. It is indeed used as a pharmacological model of psychosis in preclinical research. The goal of this review was to understand the mechanism of action of psychotic-like effects of LSD. We searched Pubmed, Web of Science, Scopus, Google Scholar and articles’ reference lists for preclinical studies regarding the mechanism of action involved in the psychotic-like effects induced by LSD. LSD’s mechanism of action is pleiotropic, primarily mediated by the serotonergic system in the Dorsal Raphe, binding the 5-HT2A receptor as a partial agonist and 5-HT1A as an agonist. LSD also modulates the Ventral Tegmental Area, at higher doses, by stimulating dopamine D2, Trace Amine Associate receptor 1 (TAAR1) and 5-HT2A. More studies clarifying the mechanism of action of the psychotic-like symptoms or psychosis induced by LSD in humans are needed. LSD’s effects are mediated by a pleiotropic mechanism involving serotonergic, dopaminergic, and glutamatergic neurotransmission. Thus, the LSD-induced psychosis is a useful model to test the therapeutic efficacy of potential novel antipsychotic drugs, particularly drugs with dual serotonergic and dopaminergic (DA) mechanism or acting on TAAR1 receptors. View Full-Text
Keywords: LSD; psychosis; serotonin; dopamine; TAAR1; hallucinogens; atypical antipsychotics LSD; psychosis; serotonin; dopamine; TAAR1; hallucinogens; atypical antipsychotics
►▼ Show Figures 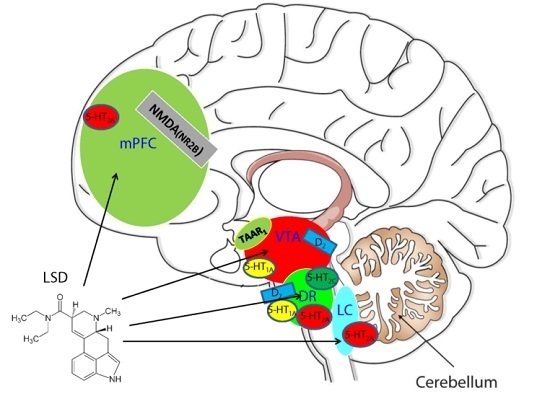