:
The present study was designed to evaluate the effects of flavonoids luteolin (L) and quercetin + luteolin (Q + L) in combination with commonly used antibacterial agents against methicillin-resistant Staphylococcus aureus (MRSA) clinical isolates and S. aureus (ATCC 43300). Minimum inhibitory concentrations (MICs) of L and Q + L, as well as the MICs of flavonoids in combination with antibiotics were determined and results showed an increased activity of flavonoids with antibiotics. The synergistic, additive, or antagonistic relationships between flavonoids (L and Q + L) and antibiotics were also evaluated, and additive and synergistic effects were observed for some antibiotic + flavonoid combinations. In addition, some combinations were also found to damage the bacterial cytoplasmic membrane, as assessed through potassium leakage assay. The effects of flavonoids and flavonoids + antibiotics on mecA gene mutations were also tested, and no functional variation was detected in the coding region.
Keywords:
flavonoids; antibiotic resistance; MRSA; combination therapy; synergism; phytochemicals 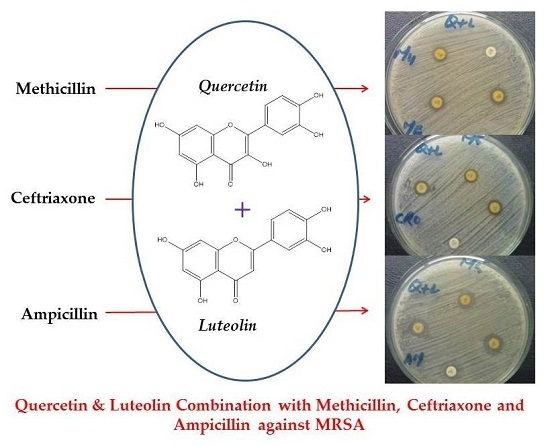 Methicillin-resistant Staphylococcus aureus (MRSA) strains first became clinically relevant in 1968 when, in a Boston hospital, second-generation penicillin was ineffective as an antibiotic agent [1]; since then, reports on MRSA have been continuously rising. This issue is a global risk in developed countries such as Japan and Korea, which have a frequency of MRSA from 0% to around 70%, while increases of 40% in the UK and USA, and of 30% in Belgium, have been observed. However, this condition is not only confined to developed countries, and the situation is even worse in developing countries such as Pakistan, where the prevalence of MRSA is rapidly increasing, especially in the last decade. It has also been observed that MRSA incidence varies from region to region and even in different hospitals within the same region. In 1999, less than 50% of S. aureus clinical isolates from the intensive care unit in National Nosocomial Infection Surveillance system were found to be MRSA strains; in the next five years, this peaked to 63%, with reports of co-resistance for antibiotics such as Gentamycin, Ciprofloxacin, Rifampicin, Cotrimoxazole, Tetracycline, and Clindamycin [2]. A 10-month multicenter study revealed a 42% frequency of MRSA strains in S. aureus isolates, which is very alarming [3].
Flavonoids have been found to be effective against Gram-positive bacteria [4]. In a study on naringenin, apigenin, quercetin, kaempferol, and 7-O-butyl naringenin against S. aureus strains isolated from meat, all the compounds exhibited bacteriostatic activity. Quercetin was found to be the most effective, while electron microscopy analysis revealed bacterial cell wall damage by 7-O-butyl naringenin [5]. In another study, propolis obtained from two different sources was evaluated against clinical isolates and standard MRSA strains. The antibacterial activity of propolis was attributed to three flavonoids, in which pinobanksin-3-O-acetate and pinocembrin were reported to be effective against MRSA [6]. Similarly, in a separate study, luteolin, quercetin, chlorogenic acid, apigenin, and scutellarin were reported for their antibacterial activity against 29 MRSA clinical isolates [7].
Due to the rapidly growing resistance in S. aureus, this study was designed to evaluate the anti-MRSA effects of luteolin and quercetin alone and in different combinations with conventional antibiotics, in order to seek alternative therapeutic options to cope with antibiotic resistance and face the threat posed by this bacterium.

Clinical isolates (n = 300) were obtained from the clinical microbiology laboratories of three major tertiary care hospitals of Peshawar, KPK, Pakistan, Hayatabad Medical complex, Lady Reading Hospital, and Khyber Teaching Hospital. The reference strain S. aureus (ATCC 43300, Rockville, MD, USA) present in PCSIR laboratories was used as the positive control. All the clinical isolates were sub-cultured on sterile MSA plates at the Department of Microbiology of PCSIR laboratories, Peshawar, Pakistan. Following incubation at 37 ± 1 °C for 18–20 h, plates showing growth were selected and subjected to routine microbiological tests like gram staining, catalase, and coagulase tests [37]. After basic characterization, isolated S. aureus were transferred to NB and incubated overnight at 37 °C. Thereafter, the turbidity of bacterial growth was adjusted to 0.5 McFarland using sterile normal saline (0.9% w/v NaCl in water solution). The standardized inoculum was used to make bacterial lawns on sterile MHA plates subjected to methicillin discs. After overnight incubation at 37 ± 1 °C, plates lacking zones of inhibition around methicillin discs or having <10 mm diameter zones were considered to be methicillin-resistant S. aureus (MRSA).
To determine the response of MRSA clinical isolates and ATCC 43300 against luteolin, luteolin + quercetin, antibiotics, and antibiotic + flavonoid combinations, disc diffusion assay was used [38]. Luteolin (L) was tested alone, in combination with quercetin (L + Q) as well as with selected antibiotics (Table 5) at different concentrations. The inhibitory zones were recorded after overnight incubation at 37 °C and all compounds were considered to be active if the inhibitory zones were >10 mm in diameter.

A broth macro-dilution method was used for MIC determination of L, L + Q, antibiotics, and antibiotics + flavonoids, at different concentrations (Table 6). Antibiotics showing increased activity in combination with flavonoids included amoxicillin, ampicillin, ceftriaxone, cephradine, imipenem, and methicillin.
An incremental increase approach was adopted to determine the exact MICs of L, L + Q alone, and in combination with antibiotics. In this approach, 20 µg increments were added to the corresponding lower concentrations. Similarly, the MICs of antibiotics alone and in combination with flavonoids against MRSA were also determined to confirm the synergistic or additive effects.
The bacterial cultures were prepared as reported previously and compounds were transferred into sterile tubes. The test tubes containing inoculums and compounds were incubated overnight at 37 °C. The MIC of the compounds was indicated by the absence of any visible growth in test tubes after overnight incubation.

The cytoplasmic membrane damage caused by flavonoids and their combinations with antibiotics was determined using a flame photometer (PFP7, Jenway, Gothenberg, Sweden) at a wavelength of 766.480 nm. Instrument calibration and test procedure were in accordance with previously reported method [16].

MRSA (ATCC 43300) was inoculated aseptically in a nutrient broth and incubated overnight at 37 °C. Thereafter, flavonoids, antibiotics, and their combinations were mixed with 1 mL of overnight grown culture at concentrations lower than their MICs and incubated at 37 °C for 30 min [41]. Genomic DNA from treated cultures was extracted using a bacterial DNA extraction kit (Vivantis Technologies Sdn, Selangor, Malaysia) as per the manufacturer’s instructions. Then, the mecA gene was amplified using the extracted DNA as a template for PCR. The following oligonucleotides were used as primers for amplification: Forward Primer (5’AAAATCGATGGTAAAGGTTGGC); Reverse Primer (5’AGTTCTGCAGTACCGGATTTGC). Amplicons from MRSA ATCC 43300 strain treated with flavonoids, flavonoids + antibiotics, and untreated were sequenced using an ABI 3300 (Thermo Fisher Scientific, Waltham, MA, USA) automated sequencer. A consensus sequence of 532 base pairs (mecA gene) was obtained by aligning sequences obtained in FASTA, on the basis of forward and reverse primers. The mecA gene sequences obtained from untreated cultures were aligned with those from the treated ones, using BioEdit v.7.2.5 (Ibis Biosciences, an Abbott company, Carlsbad, CA, USA).

Luteolin exhibited activity against both MRSA ATCC 43300 strain and clinical isolates, and its antibacterial activity was further enhanced when it was used in combination with quercetin. Furthermore, it was observed that luteolin, quercetin, and antibiotics have complemented each another against MRSA. In particular, FICI results indicated additive and synergistic relationships between these flavonoids and some antibiotics, especially the cell wall biosynthesis inhibitors. Potassium loss analysis suggested damage to the cytoplasmic membrane and cell wall. Since no functional variation was detected in the coding sequence of the mecA gene, a variation in the regulatory sequence of this gene can be hypothesized, with resultant down regulation or non-expression. The susceptibility of the MRSA bacteria might be due to changes in some other gene sequences putatively involved in the mechanism of multi-drug resistance. 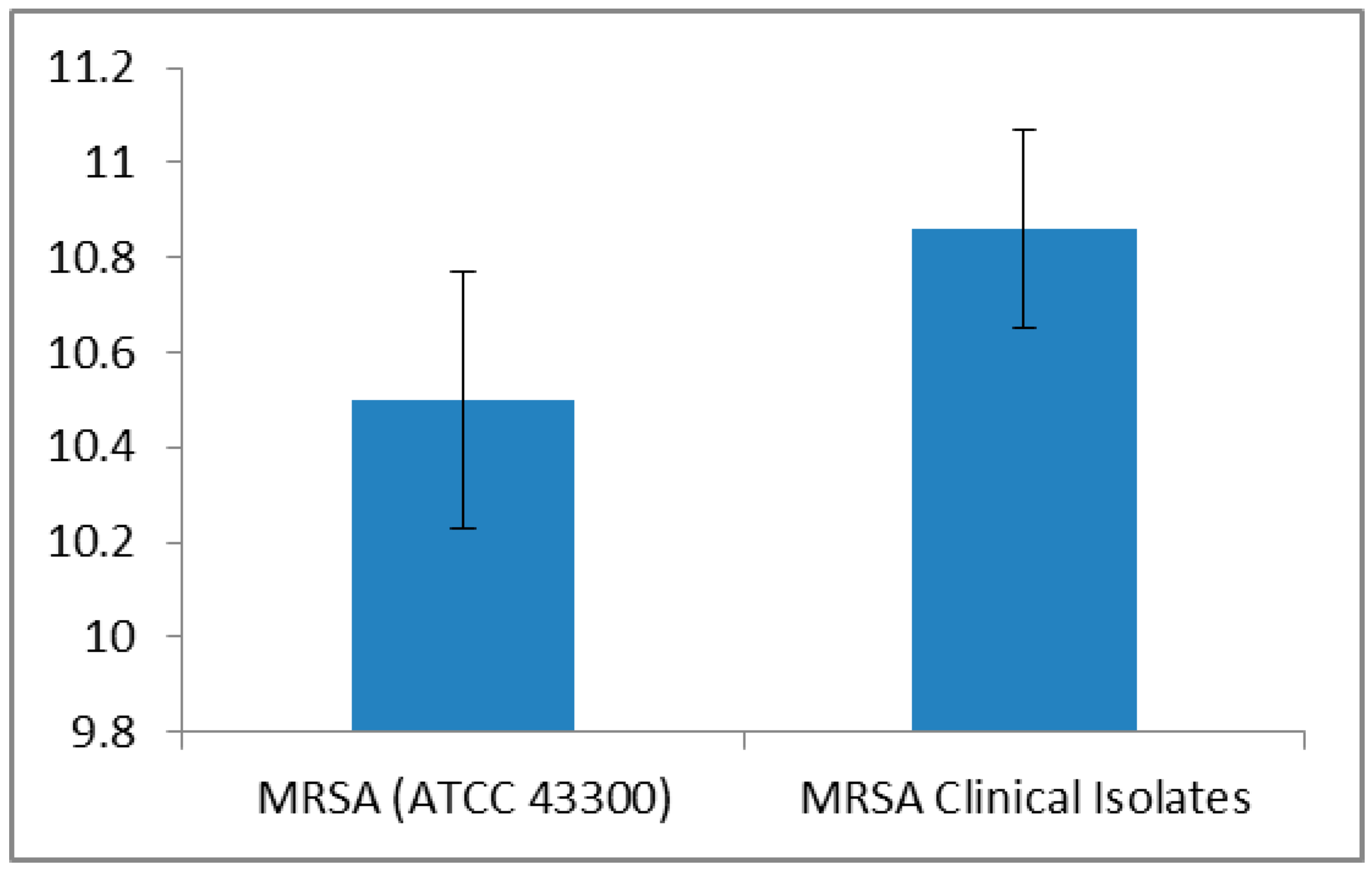 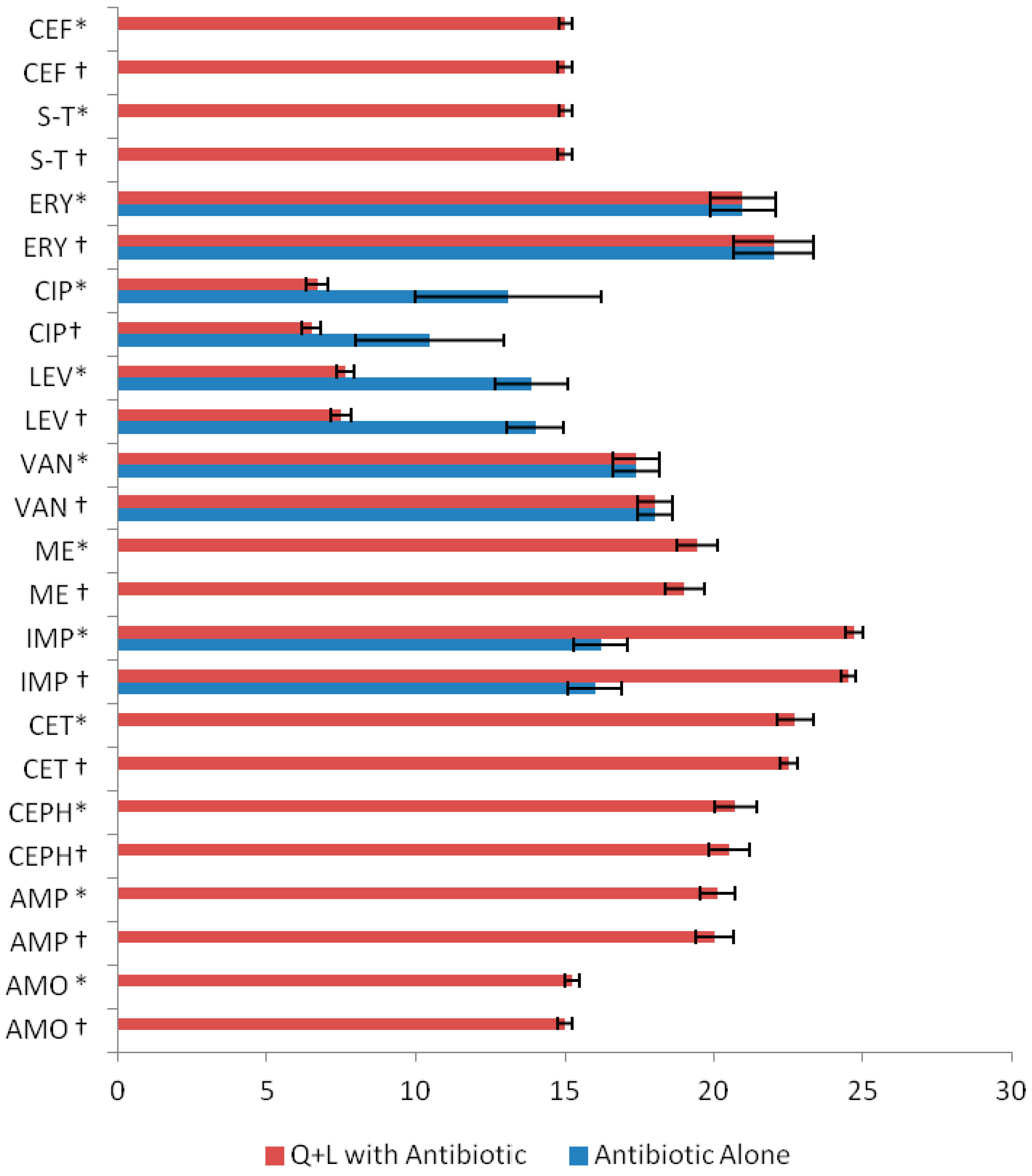 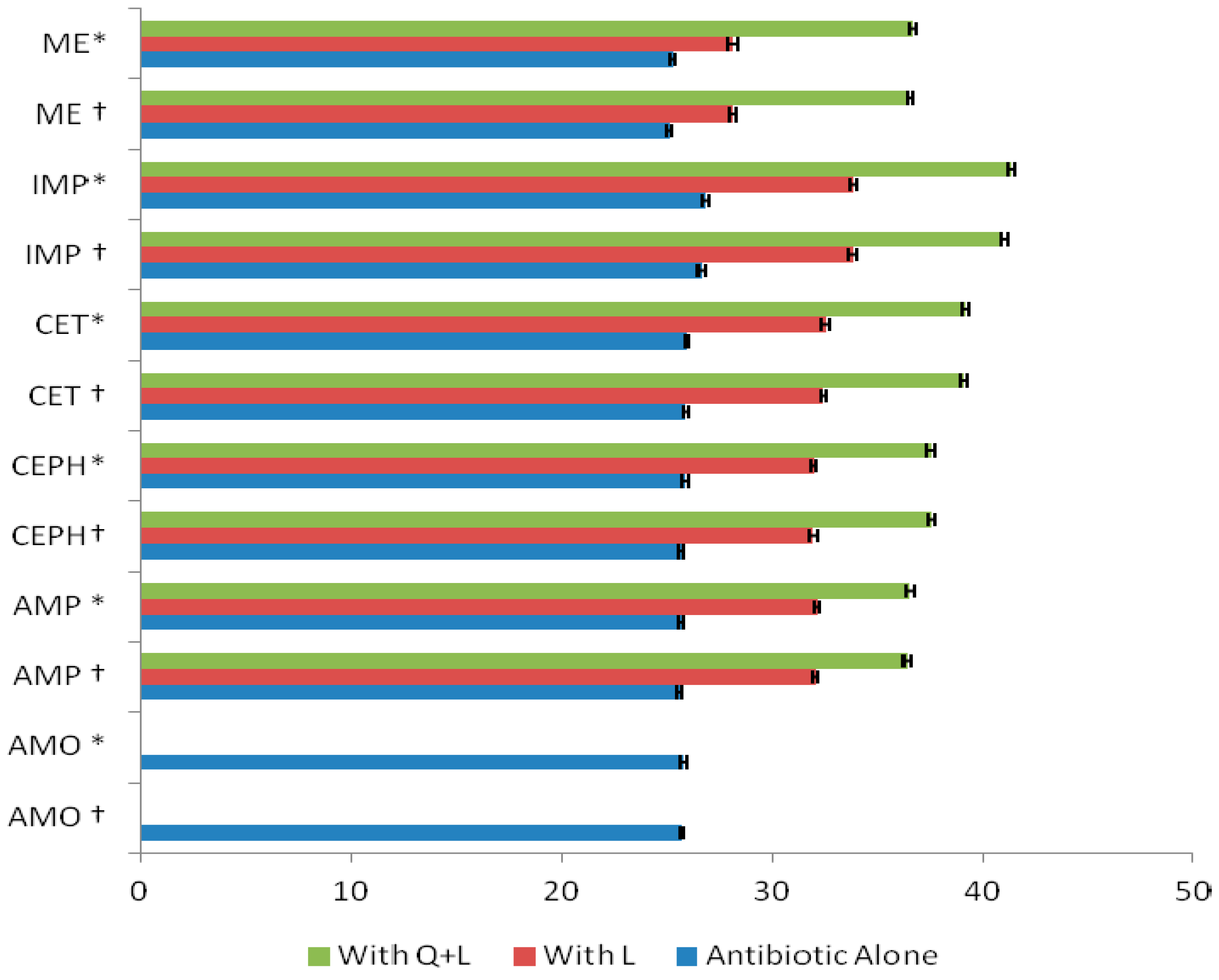