Radish cytoplasmic male sterility (CMS) has been widely used for breeding in Raphanus and Brassica genera. However, the detailed regulation network of the male sterility remains to be determined. Our previous work has shown that the abnormalities in a CMS radish appeared shortly after the tetrad stage when microspores were malformed and the tapetal cells grew abnormally large. In this work, histological analysis shows that anthers are at the tetrad stage when the radish buds are about 1.5 mm in length. Furthermore, a high throughput RNA sequencing technology was employed to characterize the transcriptome of radish buds with length about 1.5 mm from two CMS lines possessing the CMS-inducing orf138 gene and corresponding near-isogenic maintainer lines. A total of 67,140 unigenes were functionally annotated. Functional terms for these genes are significantly enriched in 55 Gene Ontology (GO) groups and 323 Kyoto Encyclopedia of Genes and Genomes (KEGG) pathways. The transcriptome detected transcripts for 72 out of a total of 79 protein genes encoded in the chloroplast genome from radish. In contrast, the radish mitochondrial genome contains 34 protein genes, but only 16 protein transcripts were detected from the transcriptome. The transcriptome comparison between CMS and near-isogenic maintainer lines revealed 539 differentially expressed genes (DEGs), indicating that the false positive rate for comparative transcriptome profiling was clearly decreased using two groups of CMS/maintainer lines with different nuclear background. The level of 127 transcripts was increased and 412 transcripts were decreased in the CMS lines. No change in levels of transcripts except CMS-inducing orf138 was identified from the mitochondrial and chloroplast genomes. Some DEGs which would be associated with the CMS, encoding MYB and bHLH transcription factors, pentatricopeptide repeat (PPR) proteins, heat shock transcription factors (HSFs) and heat shock proteins (HSPs), are discussed. The transcriptome dataset and comparative analysis will provide an important resource for further understanding anther development, the CMS mechanism and to improve molecular breeding in radish. View Full-Text
Keywords: cytoplasmic male sterility; radish; Illumina sequencing; transcriptome; differentially expressed genes cytoplasmic male sterility; radish; Illumina sequencing; transcriptome; differentially expressed genes
►▼ Show Figures 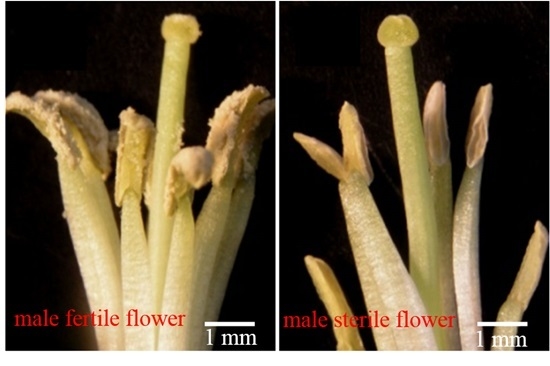