The aim of this study was to evaluate whether genome-wide levels of DNA methylation are associated with age and the health risks of obesity (HRO); defined according to BMI categories as “Low HRO” (overweight and class 1 obesity) versus “High HRO” (class 2 and class 3 obesity). Anthropometric measurements were assessed in a subsample of 48 volunteers from the Metabolic Syndrome Reduction in Navarra (RESMENA) study and 24 women from another independent study, Effects of Lipoic Acid and Eicosapentaenoic Acid in Human Obesity (OBEPALIP study). In the pooled population; the methylation levels of 55 CpG sites were significantly associated with age after Benjamini-Hochberg correction. In addition, DNA methylation of three CpG sites located in ELOVL2; HOXC4 and PI4KB were further negatively associated with their mRNA levels. Although no differentially methylated CpG sites were identified in relation to HRO after multiple testing correction; several nominally significant CpG sites were identified in genes related to insulin signaling; energy and lipid metabolism. Moreover, statistically significant associations between BMI or mRNA levels and two HRO-related CpG sites located in GPR133 and ITGB5 are reported. As a conclusion, these findings from two Spanish cohorts add knowledge about the important role of DNA methylation in the age-related regulation of gene expression. In addition; a relevant influence of age on DNA methylation in white blood cells was found, as well as, on a trend level, novel associations between DNA methylation and obesity. View Full-Text
Keywords: epigenetics; BMI; gene expression; GPR133; ITGB5; PRKCZ; PI4KB; ELOVL2 epigenetics; BMI; gene expression; GPR133; ITGB5; PRKCZ; PI4KB; ELOVL2
►▼ Show Figures 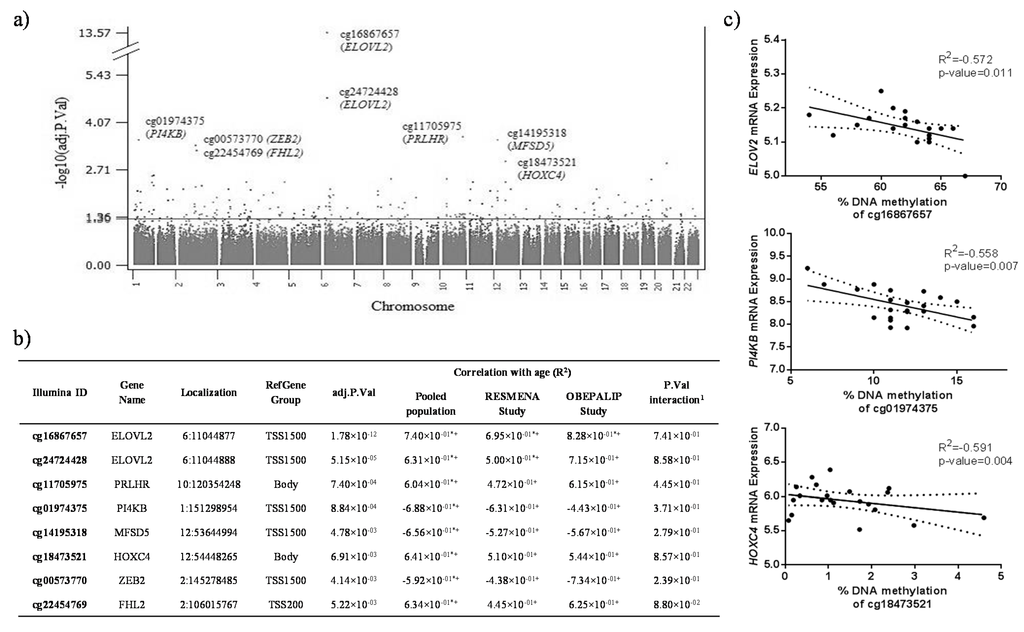