Monosodium urate (MSU) crystals, which are highly precipitated in the joint cartilage, increase the production of cartilage-degrading enzymes and pro-inflammatory mediators in cartilage, thereby leading to gouty inflammation and joint damage. In this study, we investigated the effect of MSU crystals on the viability of human articular chondrocytes and the mechanism of MSU crystal-induced chondrocyte death. MSU crystals significantly decreased the viability of primary chondrocytes in a time- and dose-dependent manner. DNA fragmentation was observed in a culture medium of MSU crystal-treated chondrocytes, but not in cell lysates. MSU crystals did not activate caspase-3, a marker of apoptosis, compared with actinomycin D and TNF-α-treated cells. MSU crystals did not directly affect the expression of endoplasmic reticulum (ER) stress markers at the mRNA and protein levels. However, MSU crystals significantly increased the LC3-II level in a time-dependent manner, indicating autophagy activation. Moreover, MSU crystal-induced autophagy and subsequent chondrocyte death were significantly inhibited by 3-methyladenine, a blocker of autophagosomes formation. MSU crystals activated autophagy via inhibition of phosporylation of the Akt/mTOR signaling pathway. These results demonstrate that MSU crystals may cause the death of chondrocytes through the activation of the autophagic process rather than apoptosis or ER stress. View Full-Text
Keywords: monosodium urate crystals; autophagy; osteoarthritis; chondrocyte; cartilage monosodium urate crystals; autophagy; osteoarthritis; chondrocyte; cartilage
►▼ Show Figures 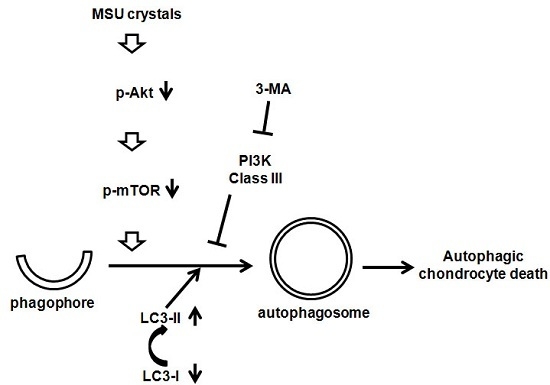