Agonist binding is related to a series of motions in G protein-coupled receptors (GPCRs) that result in the separation of transmembrane helices III and VI at their cytosolic ends and subsequent G protein binding. A large number of smaller motions also seem to be associated with activation. Most helices in GPCRs are highly irregular and often contain kinks, with extensive literature already available about the role of prolines in kink formation and the precise function of these kinks. GPCR transmembrane helices also contain many α-bulges. In this article we aim to draw attention to the role of these α-bulges in ligand and G-protein binding, as well as their role in several aspects of the mobility associated with GPCR activation. This mobility includes regularization and translation of helix III in the extracellular direction, a rotation of the entire helix VI, an inward movement of the helices near the extracellular side, and a concerted motion of the cytosolic ends of the helices that makes their orientation appear more circular and that opens up space for the G protein to bind. In several cases, α-bulges either appear or disappear as part of the activation process.
Keywords: GPCR; π-helix; α-bulge; GPCR activation; random forest; structure-function GPCR; π-helix; α-bulge; GPCR activation; random forest; structure-function

Over one hundred GPCR structures are available in the PDB. These structures relate to more than ten different GPCRs that have been solved with and without nanobodies or G proteins bound to them; with different ligands bound to them, and with different modifications to achieve crystallization. All these structures contain at least some artifacts due to crystallization. Binding a ligand or a G protein leads to structural changes such as helix displacements or rotamer flips in residues, but it is sometimes hard to separate these endogenous activation-related structure changes from those caused by crystallization artifacts. We used the variable importance score of the Random Forest (RF) method to elucidate which distances differ systematically as a function of motions associated with different phases of the GPCR activation process. However, the results of this approach cannot be taken at face-value, because we manually defined which structures were in the active or inactive state (G protein bound, or nanobody bound at the same location) and then used the RF method to determine which interatomic distances differ most systematically between the defined states. Similarly, a comparison of structures with bound agonists, antagonists, or inverse agonists is only as good as the determination of whether the bound compounds indeed are an agonist, etc. In addition, there is the risk that we may have missed a confounding variable—for example, the possibility that inverse agonists only bind to structures in which a certain mutation has been introduced.
The comparison between active structures and inactive structures, and between structures with an agonist bound and structures with an inverse agonist bound, revealed several interesting systematic movements. The strongest systematically observed effect in GPCR activation is an inward motion of Tyr733. It has been hypothesized [2,8,34–36] that this residue stabilizes the active conformation by interacting with Arg340, thereby stabilizing the open conformation of the “ionic lock” comprising Arg340 and Glu600. The outward motion of the intracellular side of helix VI is also systematically related to stages of the activation process, and is more a rotation of the entire helix then it is a bending of the helix at the kink near W618 and P620.
Compared to structures in the inactive state, structures in the active state show an upward (towards the outside of the cell) displacement of helix III combined with a hard to describe screw motion that makes the extracellular part of helix III a more regular α-helix. The extent of this upward displacement differs from case to case.
Agonist binding brings helices V–VII closer to each other around the ligand-binding site. Activation and G-protein binding are associated with a displacement of the intracellular part of helix VI that creates the crevice in which the G protein binds. Helix VI, however, does not have a hinge-point where the bending angle of the helix changes. The helix itself stays rigid but it rotates in such a way that its cytosolic side moves outwards. Combined with the regularization of helix III, and the known constitutive activity of many GPCRs in the absence of agonists, we see similarity to a clothespin in the model for G protein activation. GPCRs are mostly in the inactive conformation (clothespin closed) and occasionally in the active conformation (clothespin open), in which state they can activate a G protein (catch the laundry). Agonist binding and G protein binding both stabilize the active conformation. The activating ligand keeps the extracellular sides of helices V–VII close together and straightens helix III, while also moving helix III upwards, towards the extracellular side. The other helices do not bend at their hinge points but maintain their same general local orientation. It could be hypothesized that the upward movement of helix III makes it easier to break the ionic lock. During GPCR activation, Arg340 flips upwards, where it is maintained in position by interactions with Tyr733 and Tyr528. This creates a crevice at the intracellular side of the receptor in which the C-terminal end of a G protein’s α-subunit can dock. After binding to the activated GPCR, the G protein exchanges its bound GDP for a GTP and activates downstream pathways. An inverse agonist keeps the GPCR in its inactive state by pushing the extracellular sides of the helices outward, thus keeping the cytosolic sides of the helices close to one another.

GPCR structures were extracted from the PDB [58] and stripped of water, crystallization additives, multimeric partners, G proteins, cloned-in lysozymes, antibodies, etc. They were renumbered using the GPCRDB numbering scheme [59] which has the advantage of allocating identical residue numbers to homologous residues, making it easier for many computer programs to deal with them. For example, the Utopia-GPCRDB intelligent PDF-reader [60] directly couples GPCR-related articles to the GPCRDB [61] information system, making it very easy to place information extracted from an article in the wider context of GPCR knowledge. For example, this article can be read most productively using the Utopia-GPCRDB intelligent PDF-reader, which can be downloaded from the GPCRDB [61].
Unless mentioned otherwise, global structure superpositions were performed using the YASARA (YASARA Biosciences, Vienna, Austria) [44] implementation of the Mustang structure alignment program [62]. Local superpositions were produced with the WHAT IF [63] superposition module [64] that is integrated into YASARA. The superposition of single helices using only Cα atoms of corresponding residues (thus neglecting bulge residues when one superposition partner does not possess that bulge) was performed using a variant of the WHAT IF superposition module specifically adapted for the purpose.
Analyses were performed using the randomForest module [65] in the R [66] package. Variable importances for predefined classes were determined using standard parameters and ntree = 1000, importance = TRUE. Variables were sorted with the Gini importance parameter as sorting key.
α-Bulges were detected with a rewritten version of DSSP [67]. This rewritten version, DSSP 2.0, produces >>99.9% the same results as the now thirty-year old original DSSP 1.0 program written by Kabsch and Sander when α-bulges (also often called π-helices [26]) are not counted. Table 1 lists the structures used and their α-bulges.
DSSP 2.0 is freely available through the Centre for Molecular Bacteriology and Infection (CMBI) structure facilities [68] web pages [69] or directly from the DSSP FTP site at [70]. All structures mentioned in this study, and an extensive study of the effects of mutations and crystallization additives on the structures, are available at [18]. This website also holds many methodological details that are beyond the scope of this article.

We have shown that α-bulges are a prominent feature of GPCRs and that the bulges in helices II and V are highly conserved, albeit varying in type, and in helix V also varying in location. We also observed bulges in helices IV and VII. In several cases, the presence or absence of these bulges is directly linked to the activation process, but in other cases this conclusion awaits experimental validation. Although α-bulges have so far largely eluded the interest of the GPCR research community, we hope that this short summary of our observations will stimulate experiments aimed at shedding light on their precise functional role. 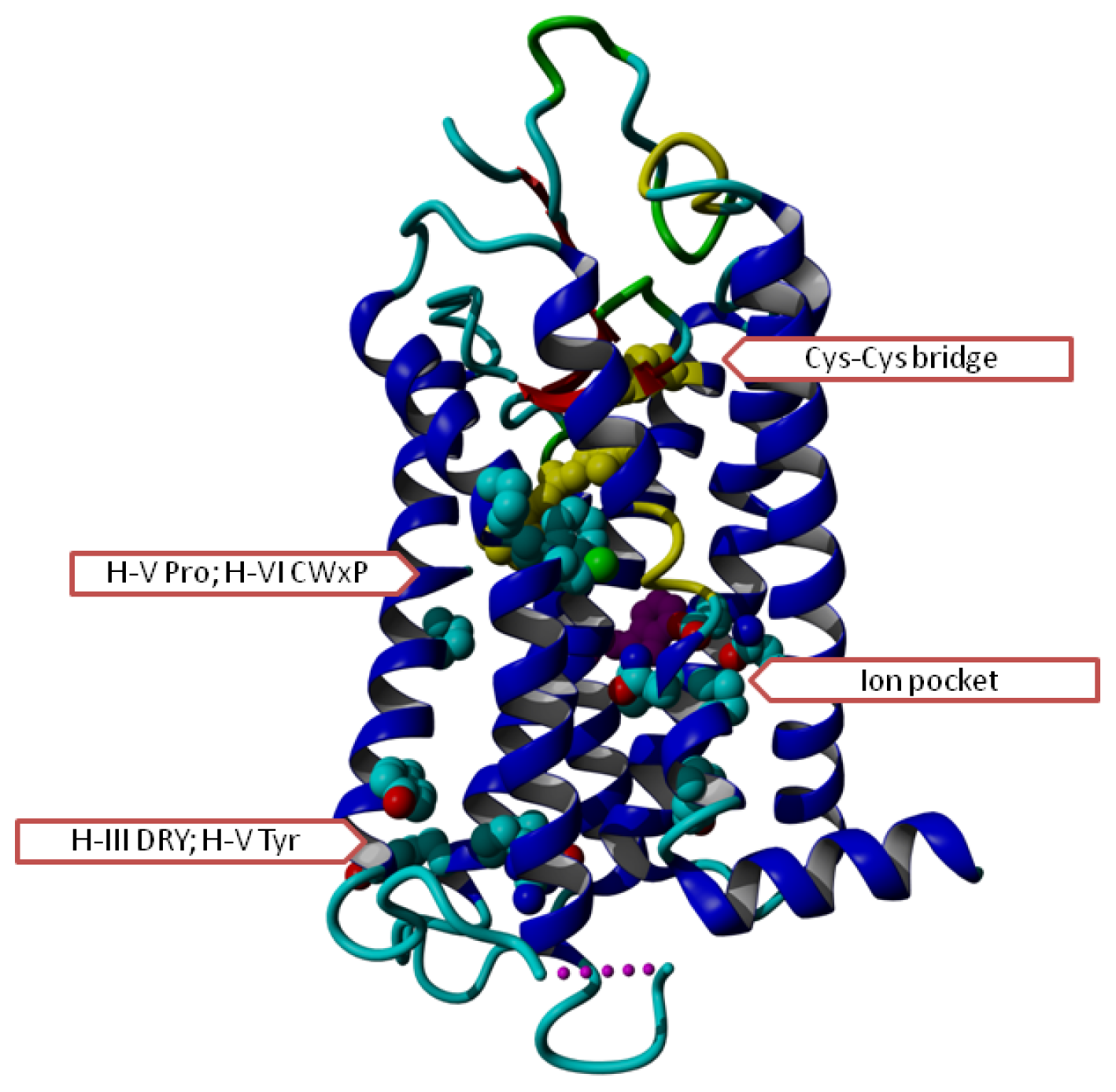 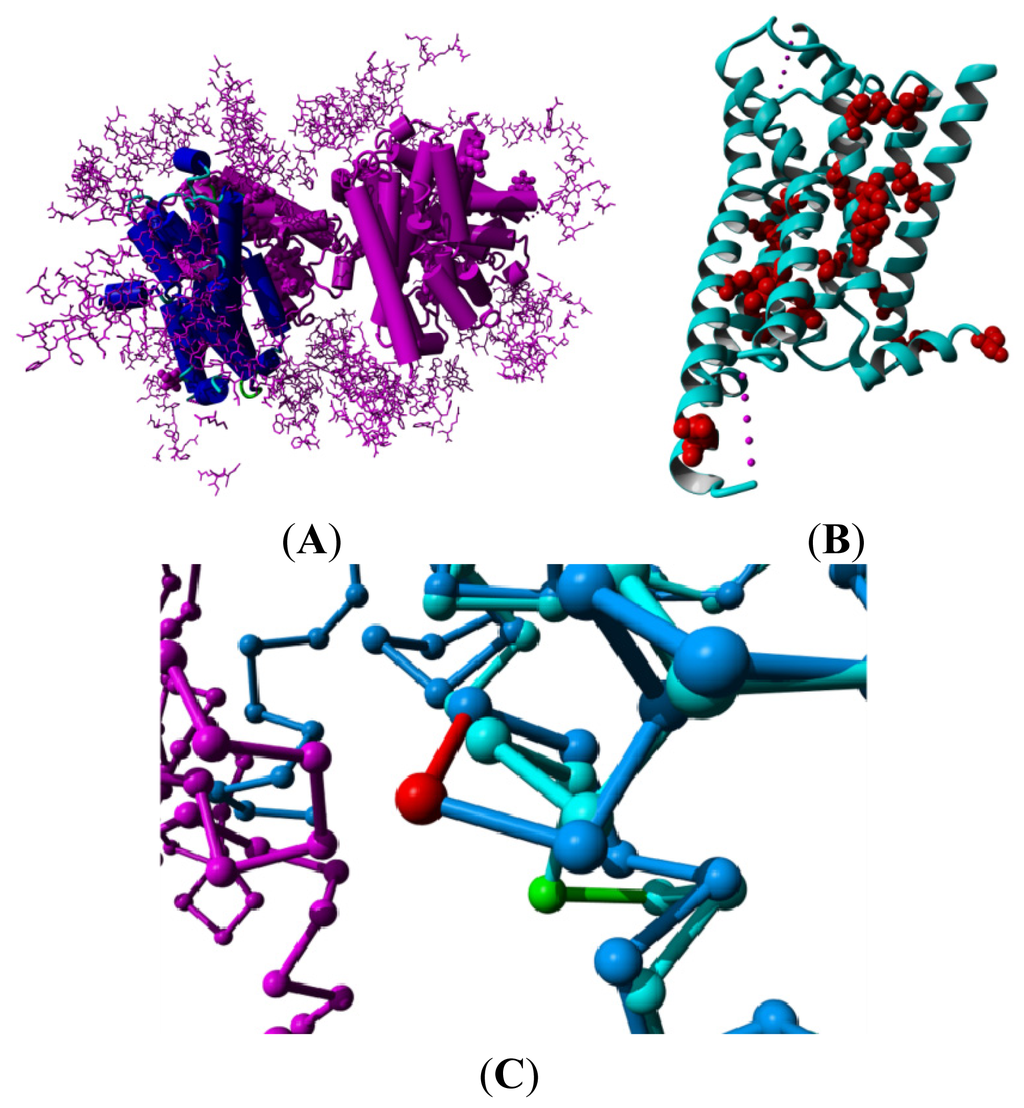 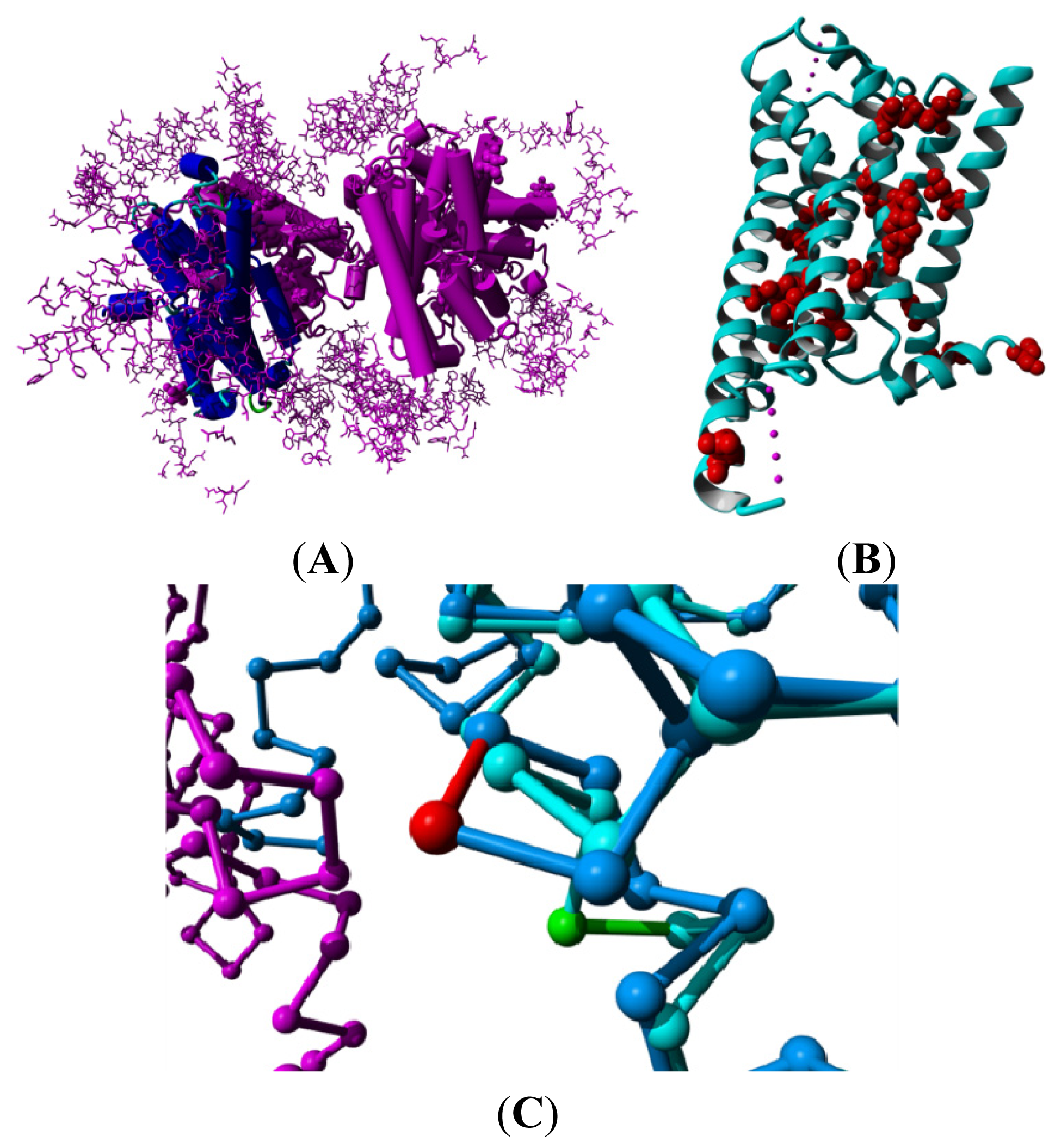 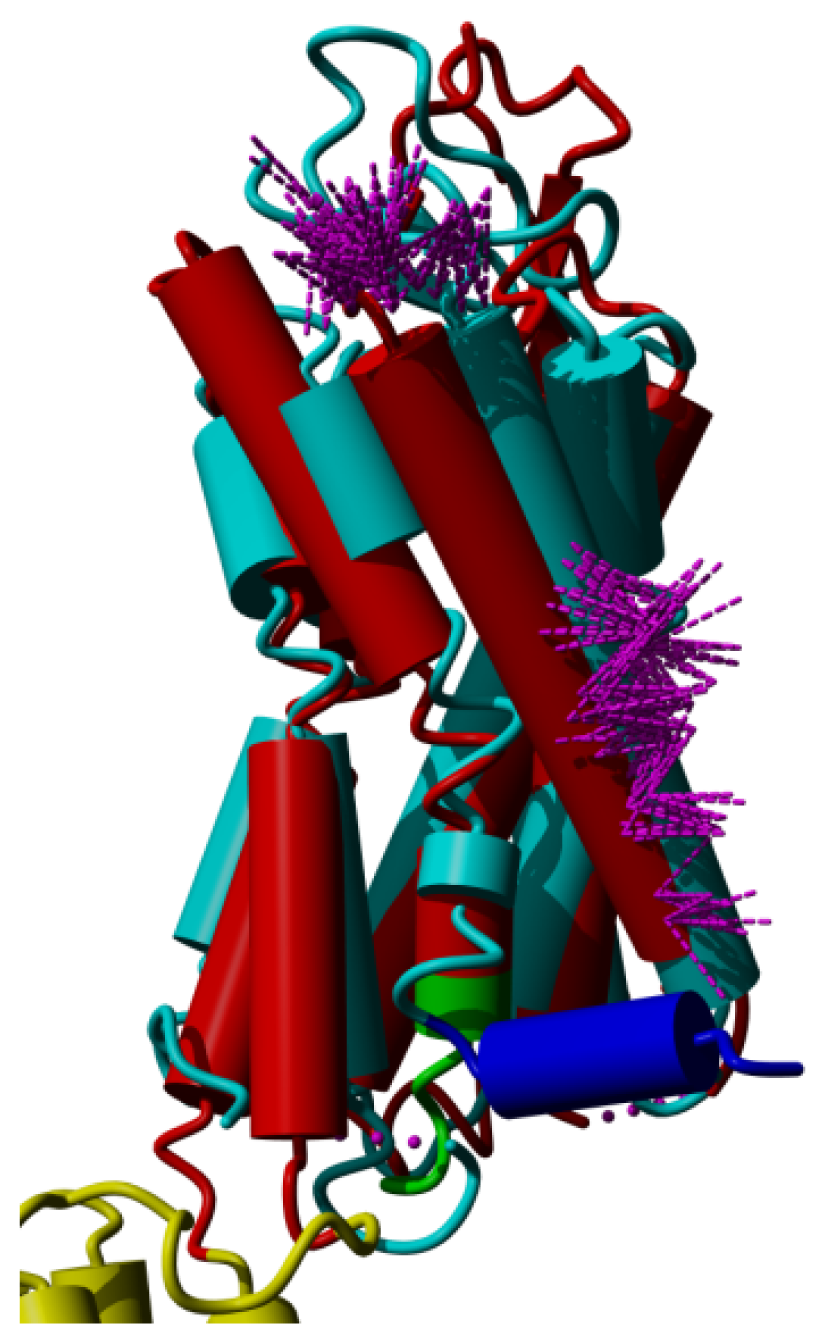 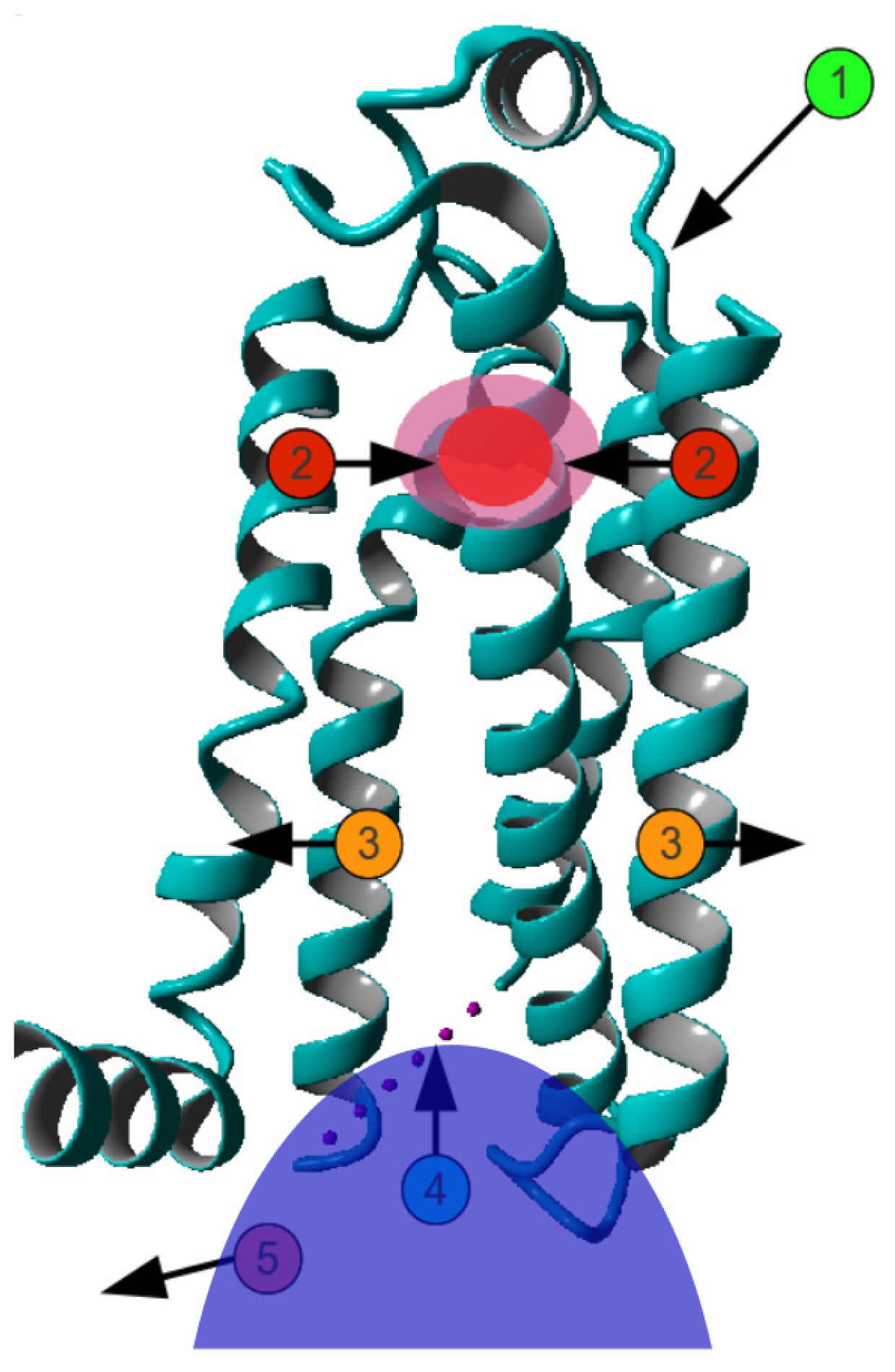 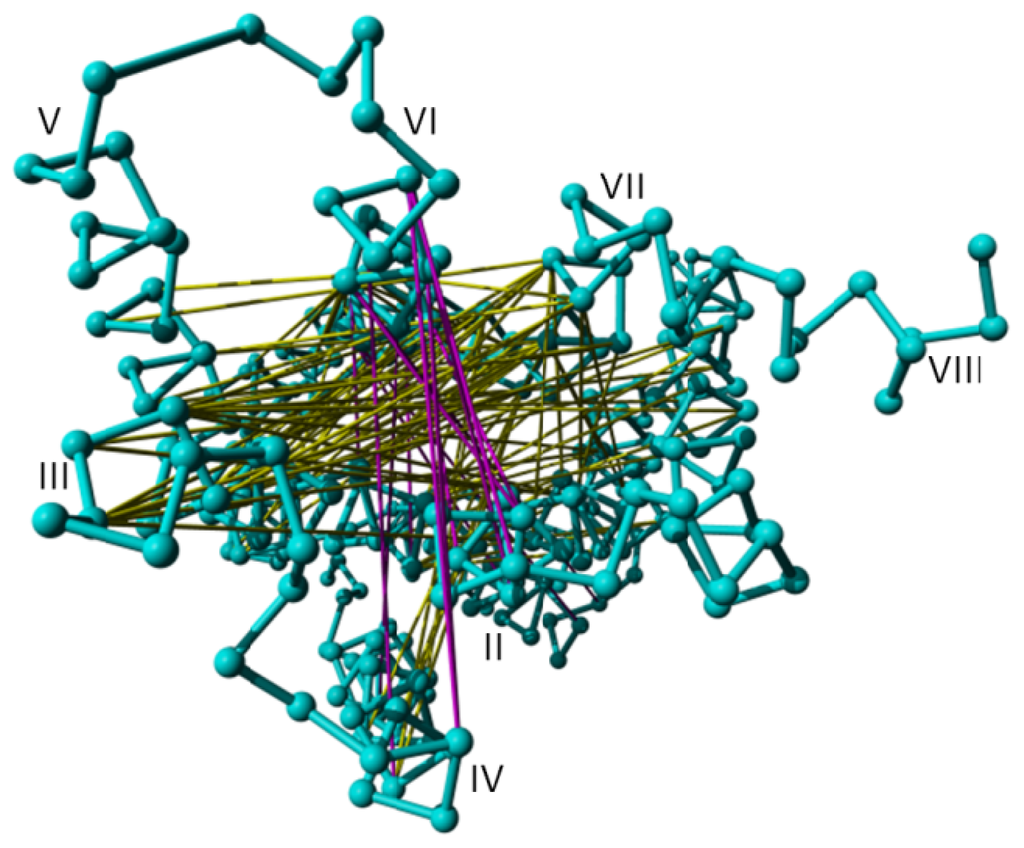 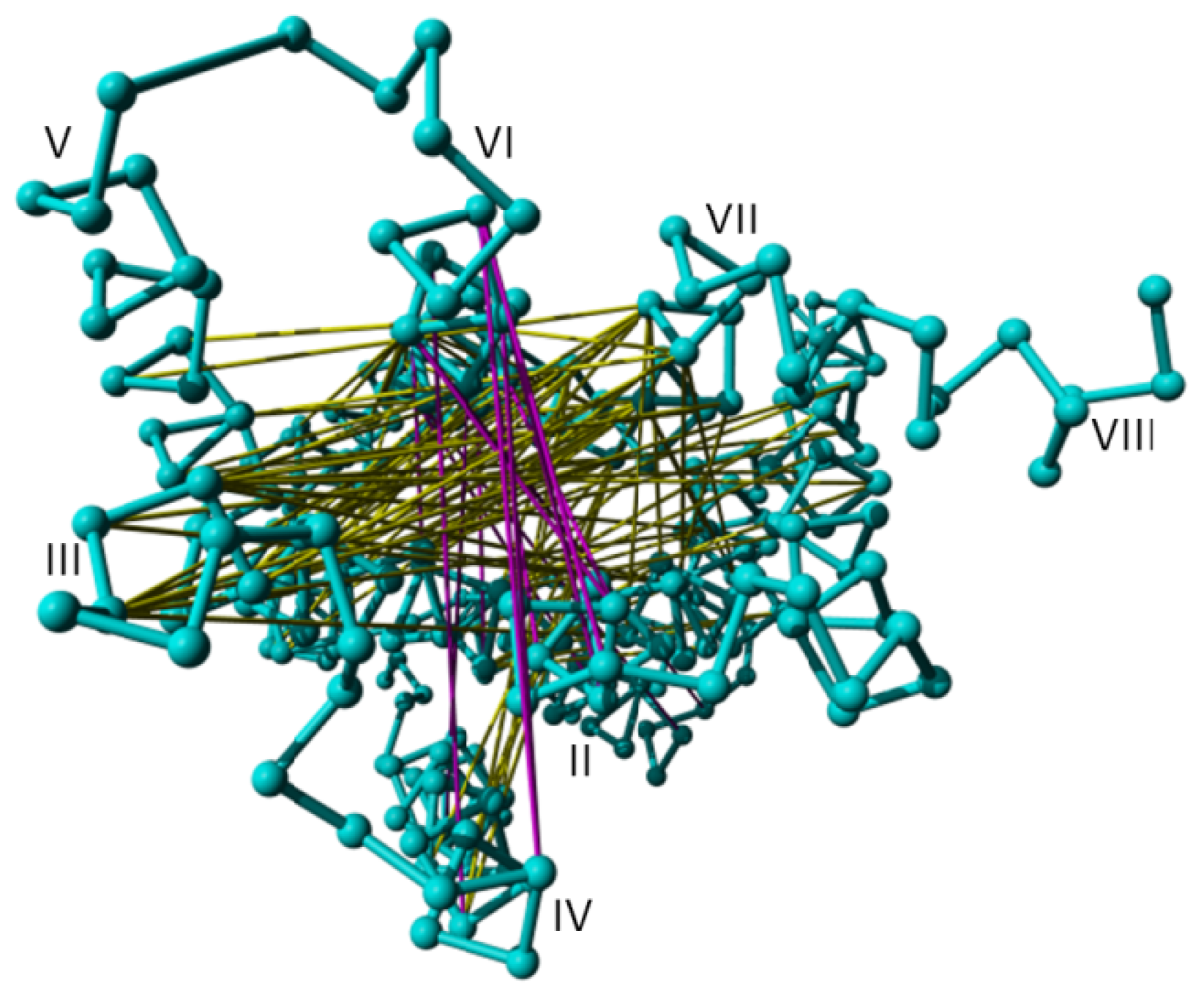 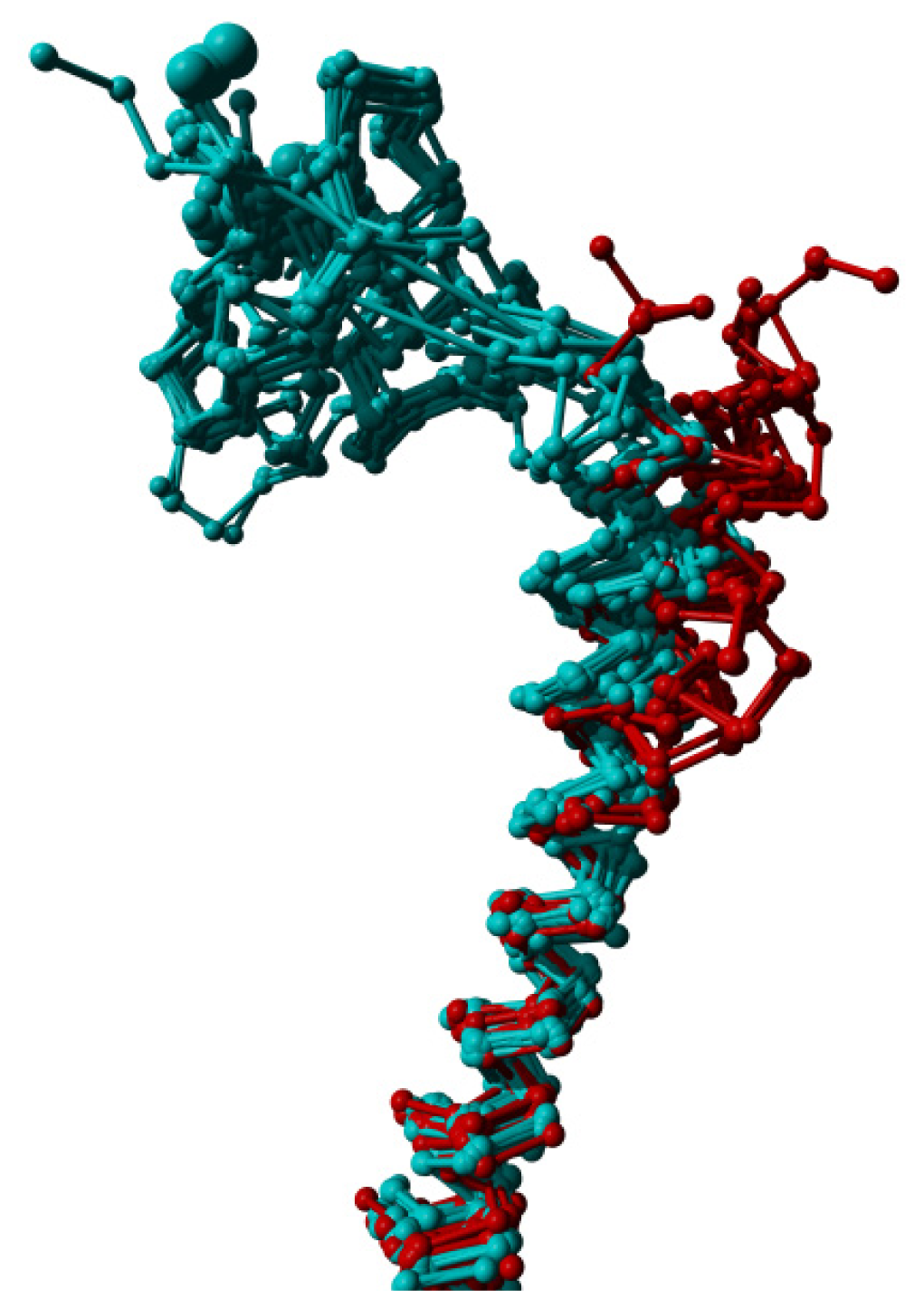 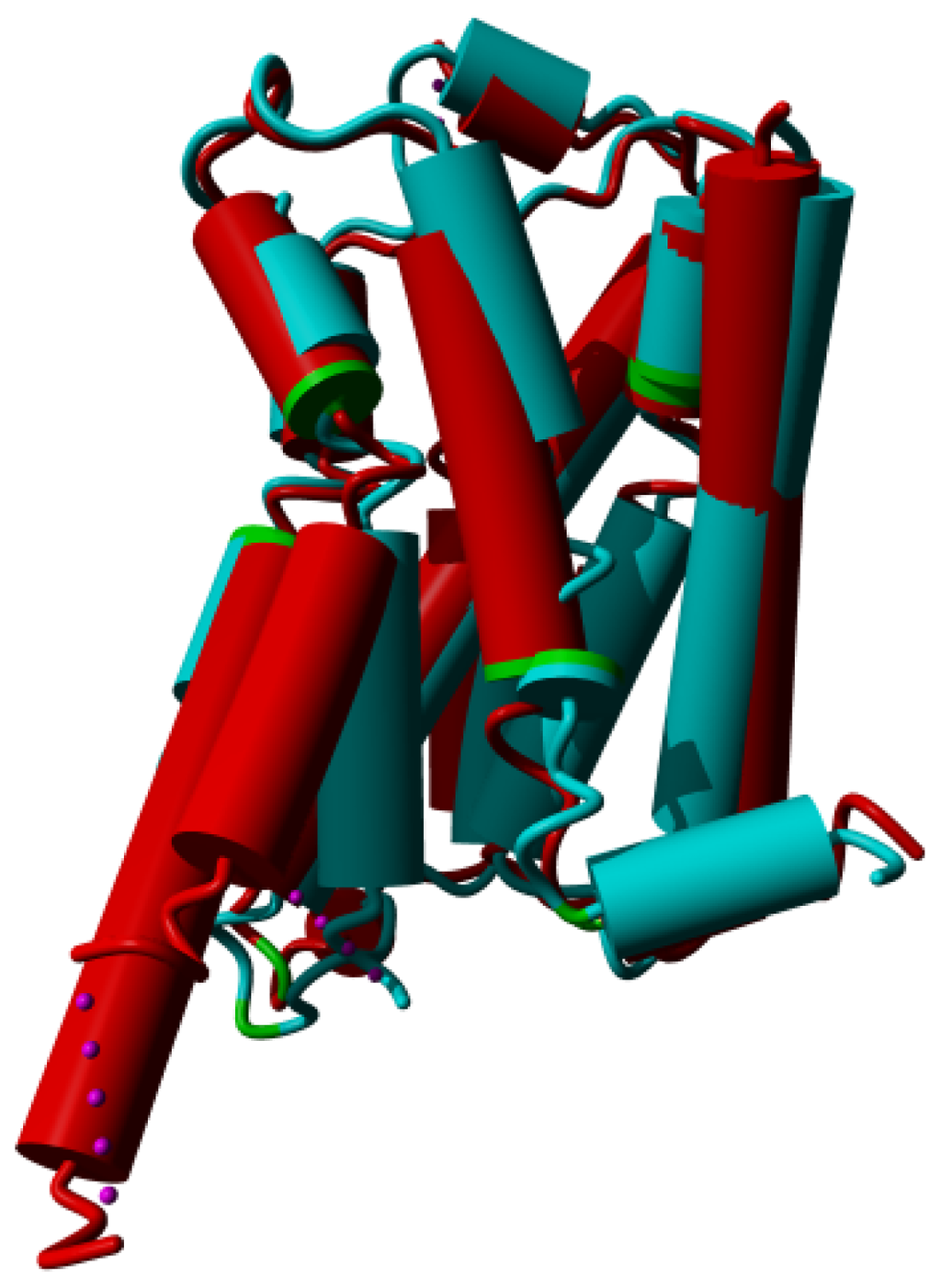 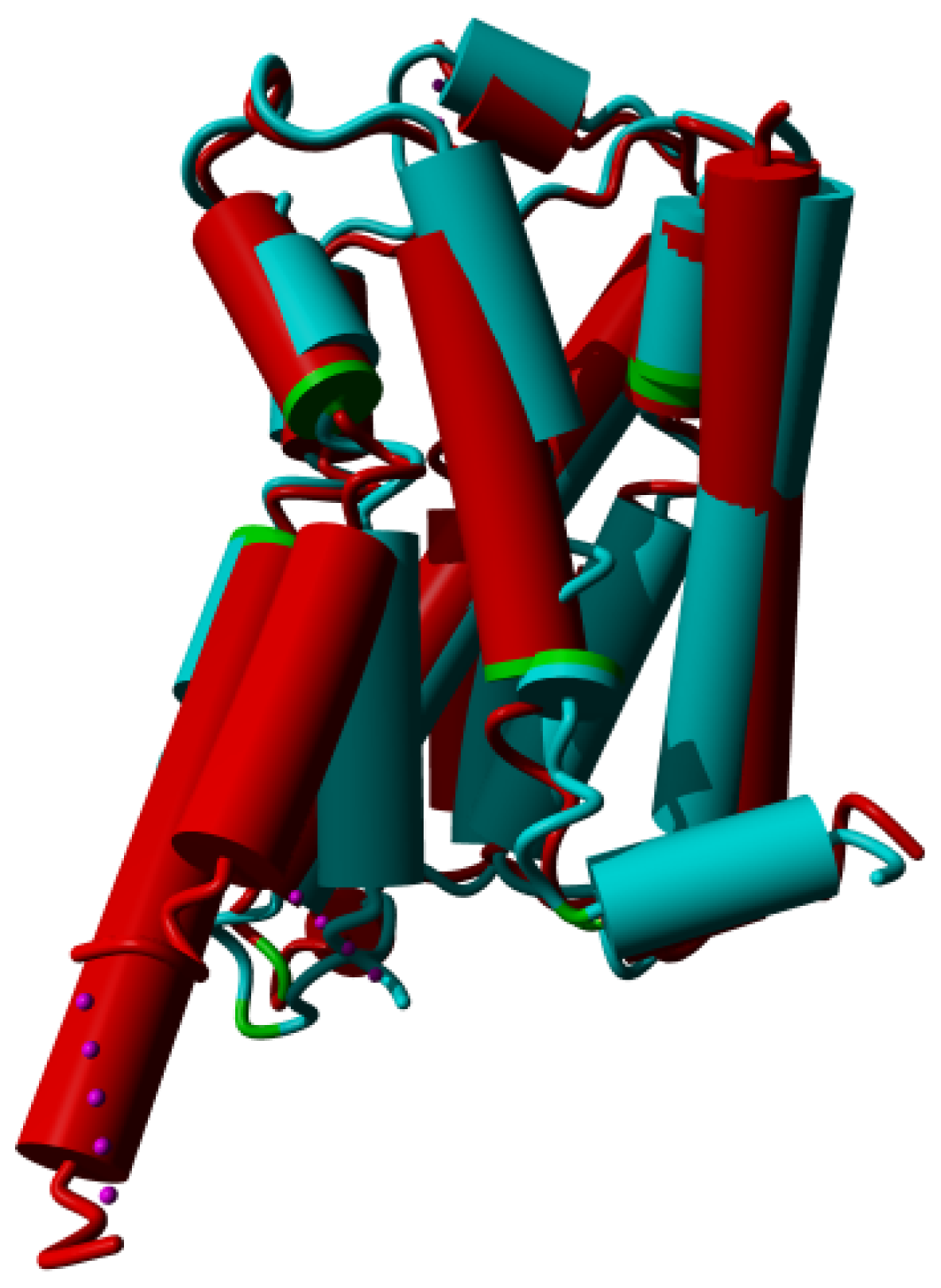 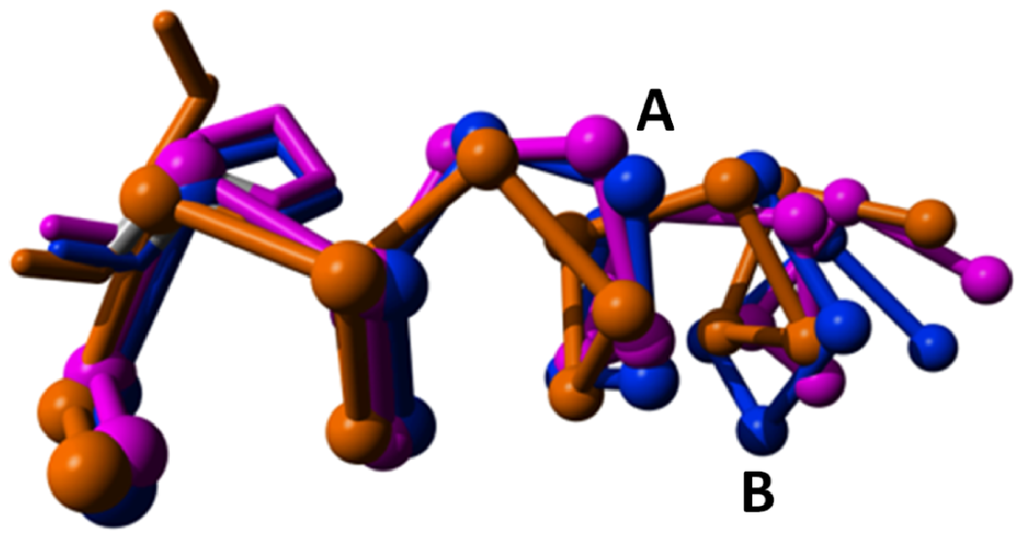 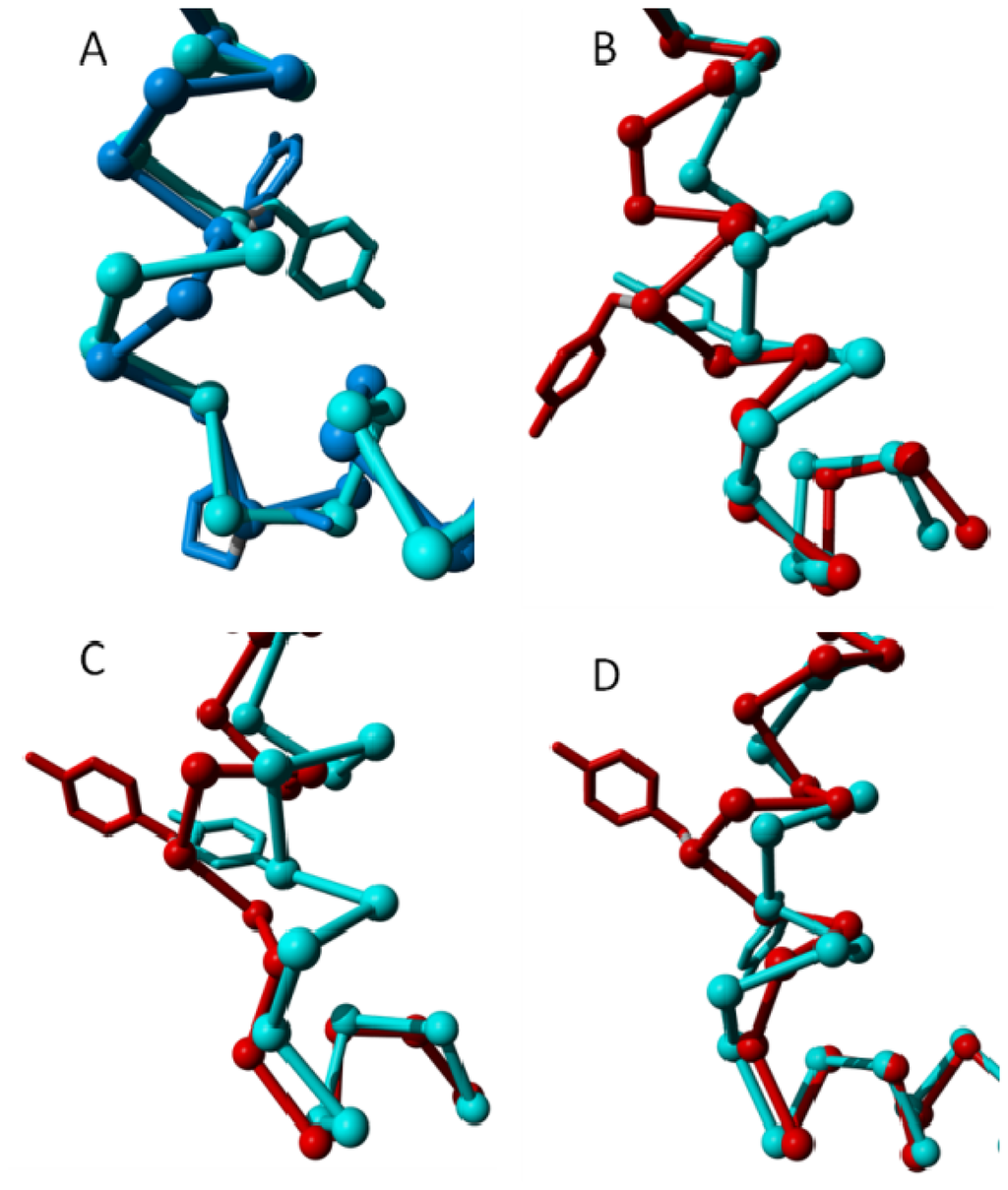 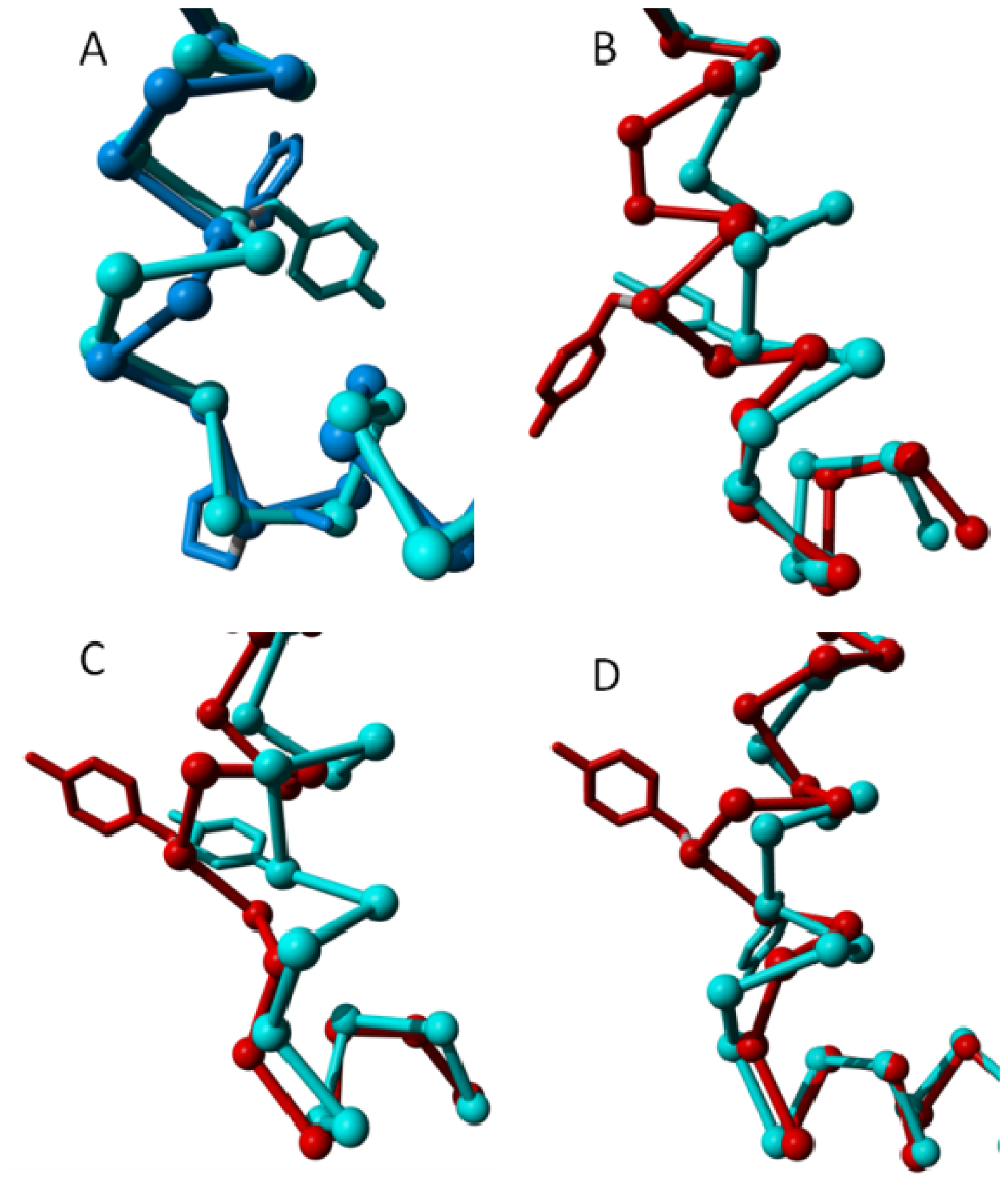 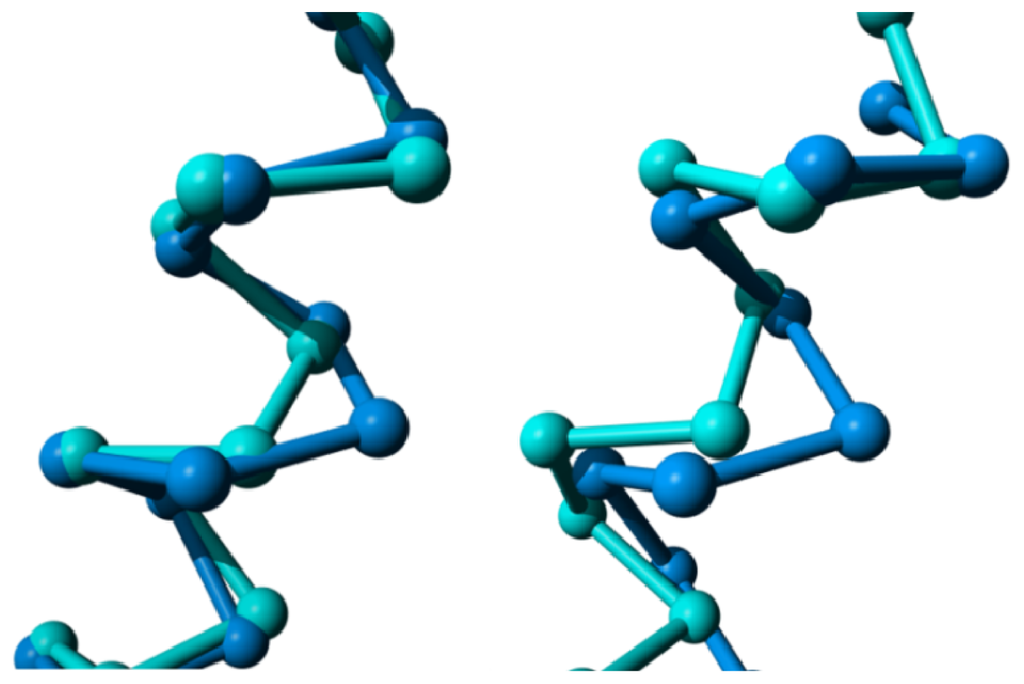 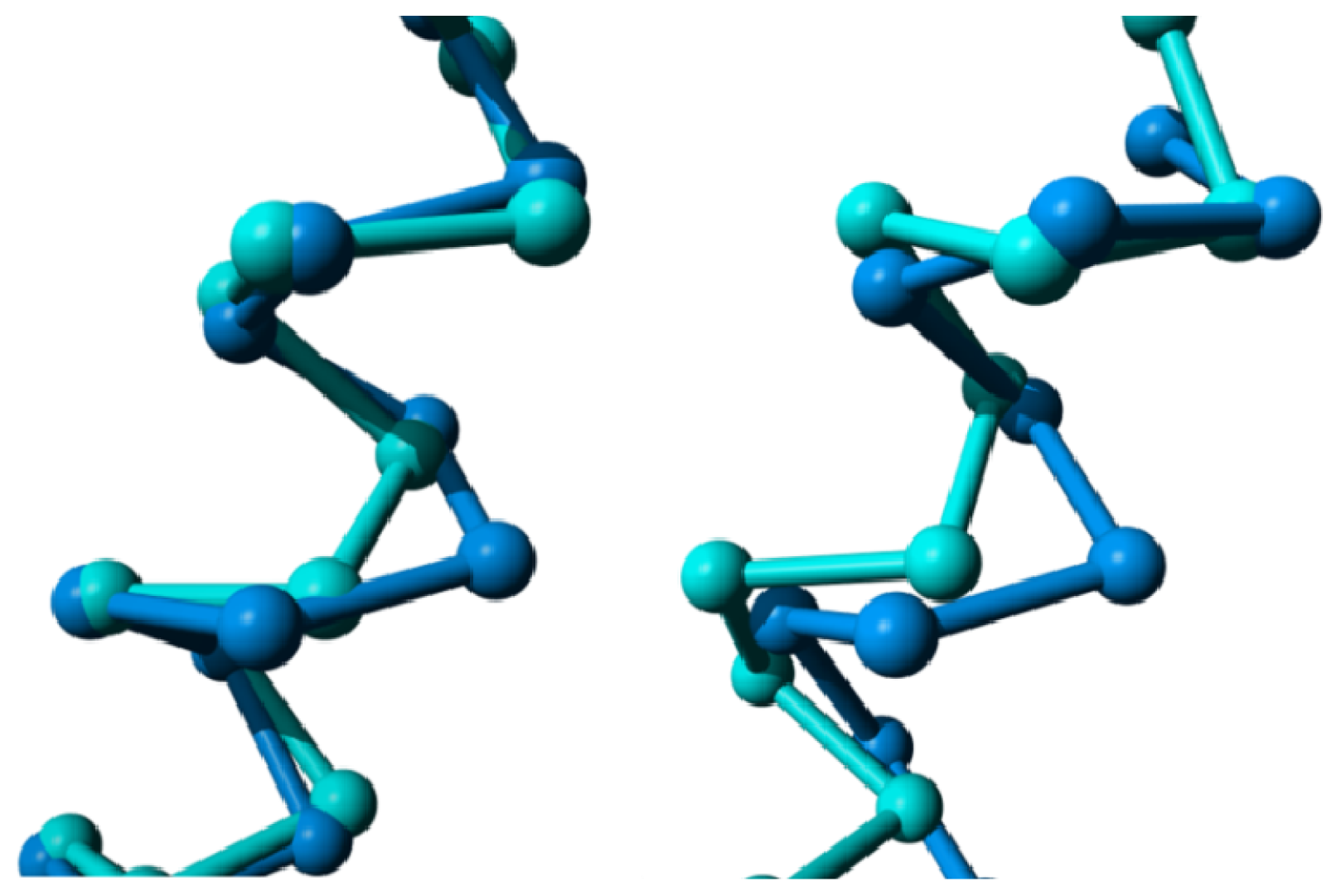 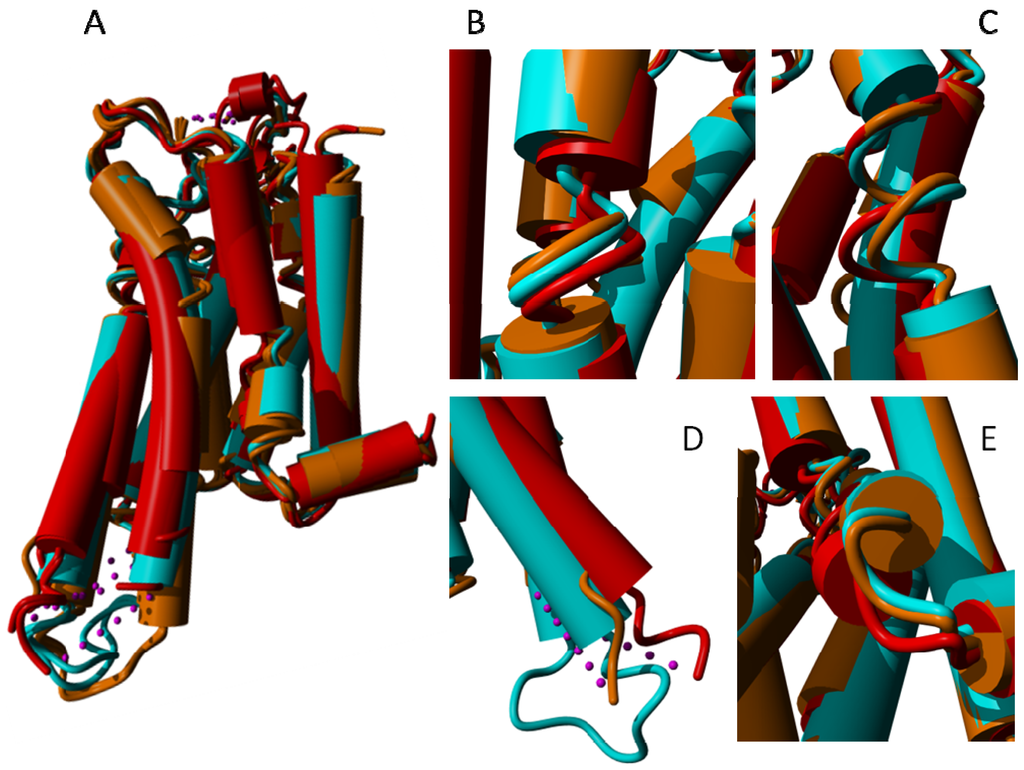 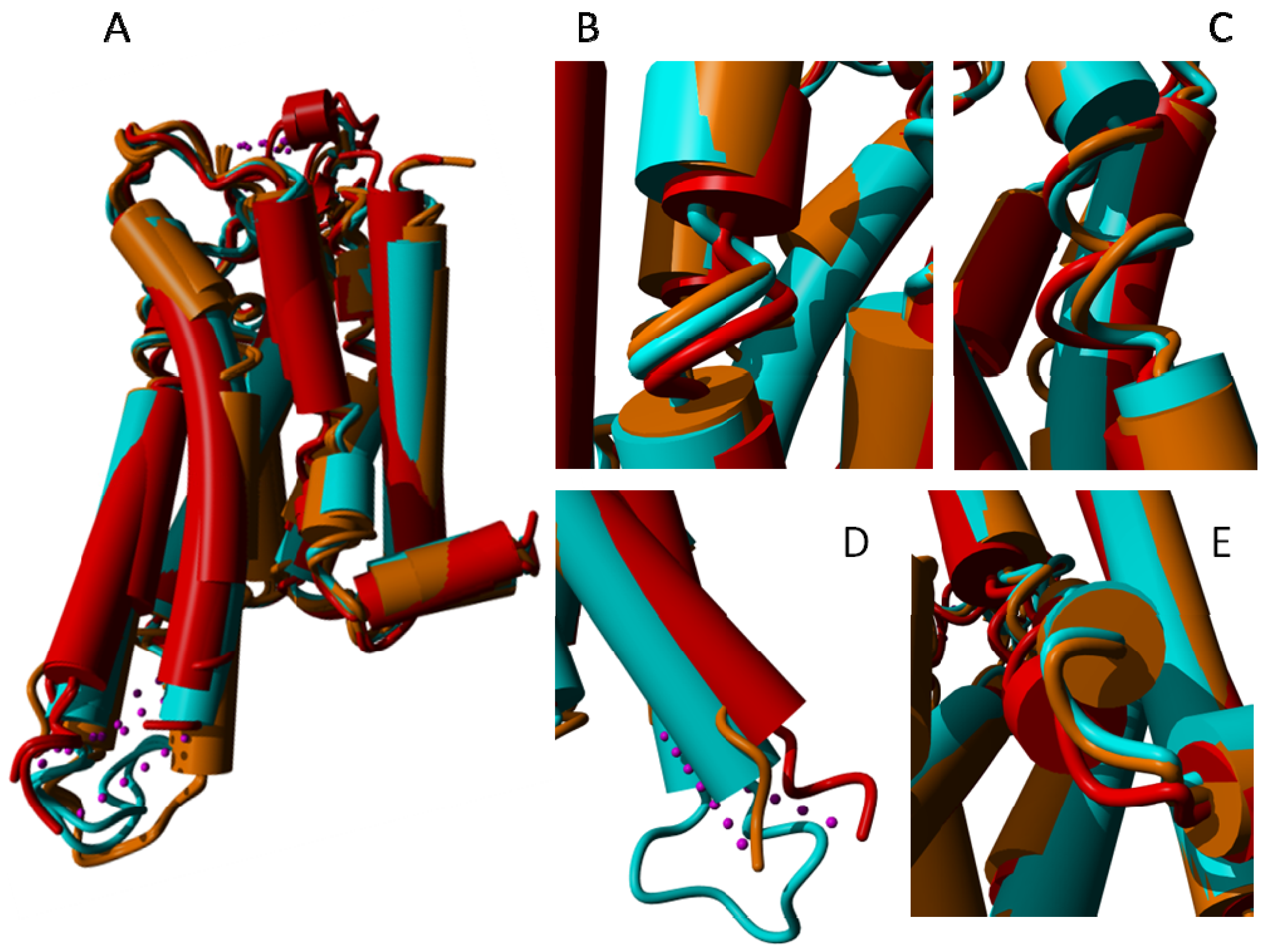 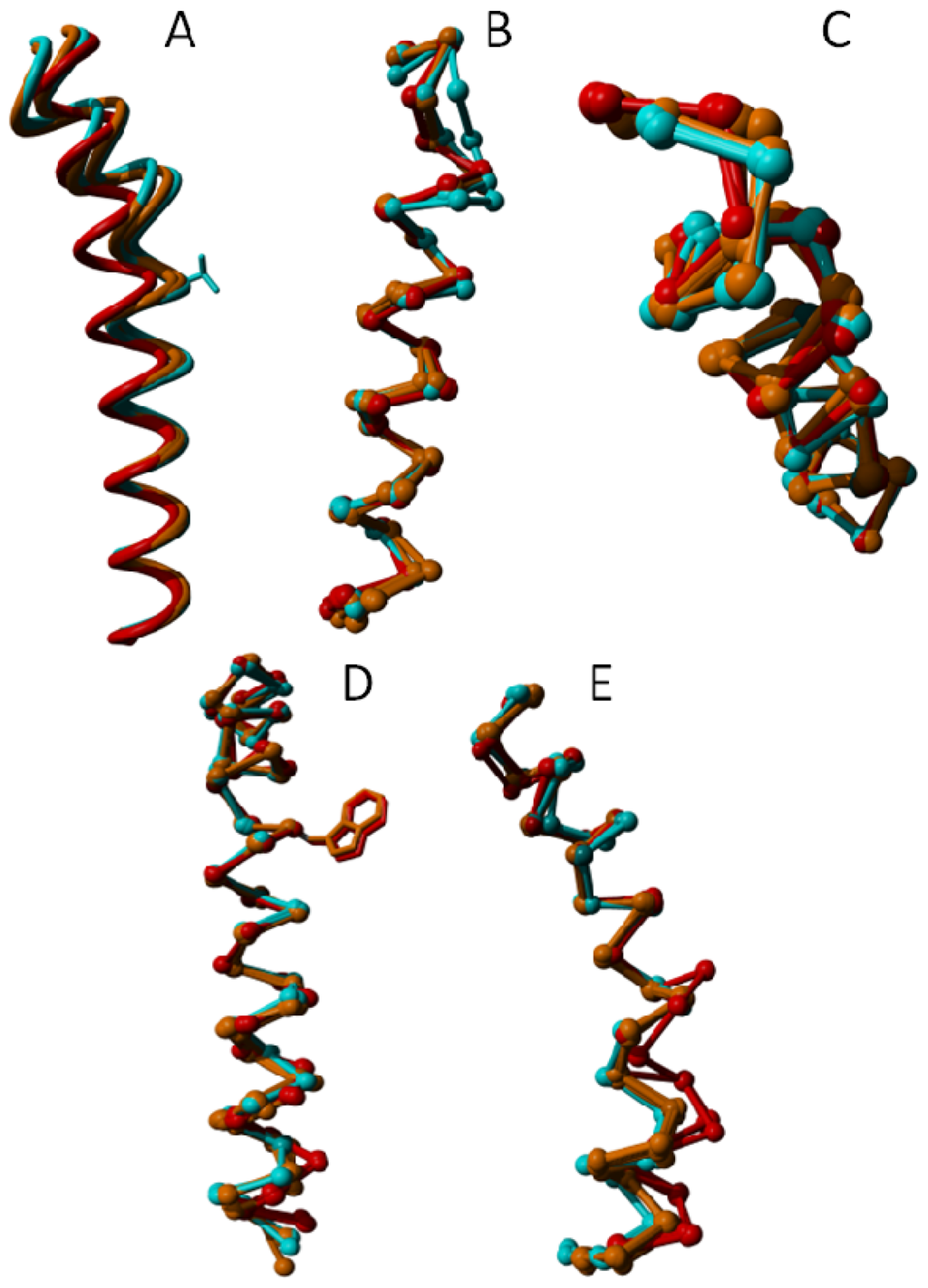 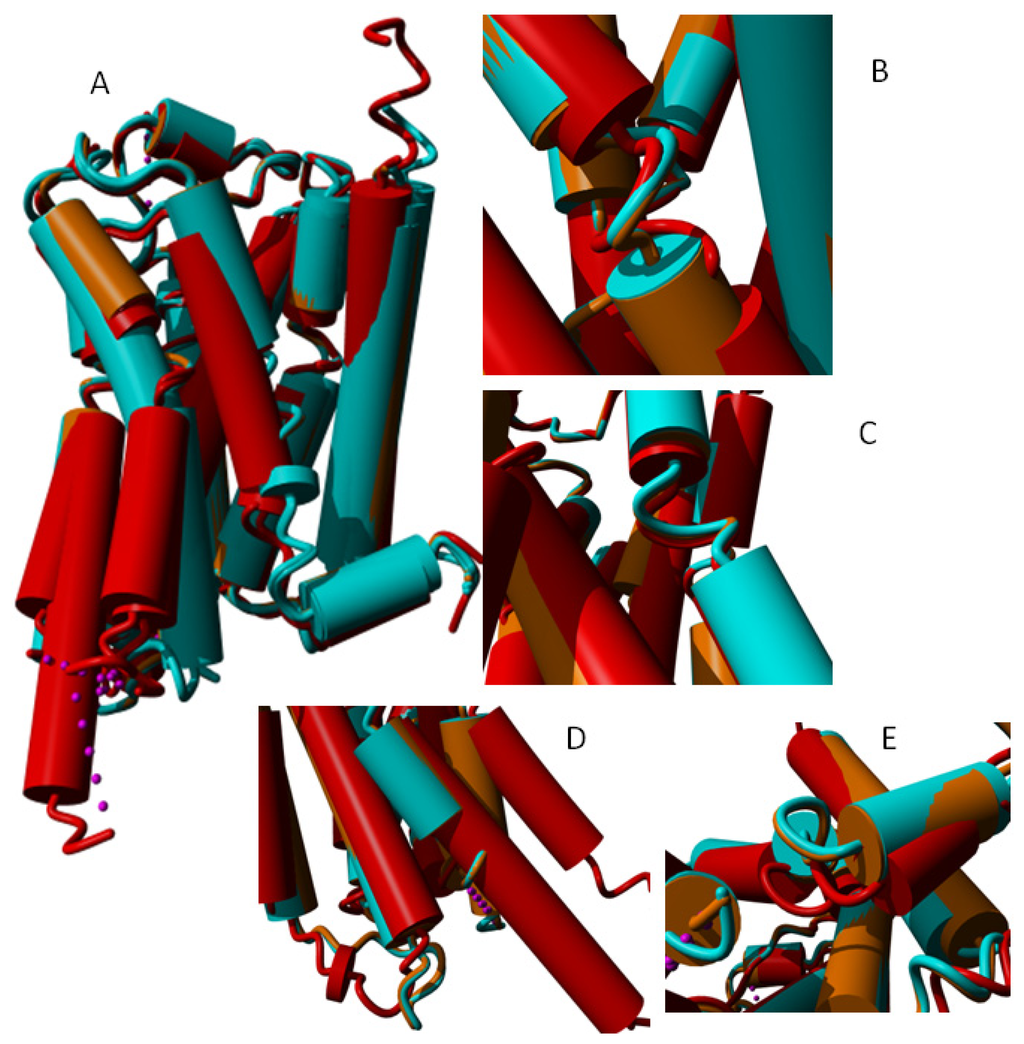 Table 1. Occurrence of α-bulges in the seven helices in the 84 GPCRs. Most α-bulges occur in helix II and helix V (near the ligand-binding pocket). The lipid receptors contain no α-bulges. α-Bulges were determined with DSSP 2.0. Helix VII generally contains a stretch of 3/10 helix near sequence position 720–725 (see Figure 9. The numbers 0, 1, and 2 indicate that we observed zero, one, or two bulges in that helix, respectively. In a few cases one extra turn of 3/10 helix is observed near the cytosolic end of Helix VII; these are indicated with −1.
*Bulge in Helix V of the A2A receptors is twice as long as in other receptors.