Apoptosis is the most crucial form of cell death in mammals, and its molecular signaling pathway is well defined [3]. Mammalian cells possess two apoptotic signaling pathways, which are known as the intrinsic and extrinsic pathways. In the intrinsic pathway, most apoptotic stimuli transmit death signals to the mitochondria and increase the permeability of the outer mitochondrial membrane, which leads to the release of apoptogenic proteins, such as cytochrome c, Smac, and Omi, into the cytoplasm from the mitochondria. After its release, cytochrome c associates with apoptotic protease activating factor-1 (Apaf-1), which activates the caspase cascade to execute apoptotic cell death. Smac and Omi accelerate caspase activation through inhibition of Inhibition of Apoptosis (IAP) family members that function as endogenous caspase inhibitors. Apoptosis-associated mitochondrial membrane permeability is primarily controlled by Bcl-2 family members, which include three subgroups: anti-apoptotic proteins (Bcl-2, Bcl-xL, and Mcl-1); multi-domain pro-apoptotic proteins (Bak and Bax); and proteins with only BH3 domain (Bid, Bim, Bik, Bad, Noxa, and Puma). Among them, Bak and Bax play an essential role in the release of apoptogenic proteins (Figure 1). In the extrinsic pathway, engagement of death receptors, such as Fas and tumor necrosis factor-α receptor, directly activates caspase-8 that activates downstream caspases, such as caspase-3 or caspase-7, which induce apoptotic cell death.
Until 10 years ago, evidence indicated that physiological and pathological cell death was primarily mediated through apoptosis. However, detailed analysis of Bax/Bak double-knockout mice in which the intrinsic apoptotic pathway is totally inhibited, indicated that PCD largely proceeds normally, even in mice resistant to apoptosis [4,5]. These findings focused the attention of researchers on identifying other pathways of PCD, which led to the discovery that autophagy also mediates PCD as well as other physiological and pathological events.

Autophagy is a catabolic process that digests cellular contents within lysosomes. Autophagy is a low-level constitutive function that is accelerated by a variety of cellular stressors such as nutrient starvation, DNA damage, and organelle damage. Autophagy serves as a protective mechanism that facilitates the degradation of superfluous or damaged cellular constituents, although hyperactivation of autophagy can lead to cell death.
Evidence supports the conclusion that autophagy represents the major pathway for degrading cytoplasmic proteins and organelles [6]. In this multistep process, cytoplasm and damaged organelles are sequestered inside isolation membranes that eventually mature into double-membrane structures called autophagosomes that subsequently fuse with lysosomes to form autolysosomes, which digest the sequestered components. The molecular basis of autophagy was first studied in autophagy-defective mutant yeasts [6]. Subsequent identification of vertebrate homologs of yeast autophagy proteins greatly expanded our understanding of the molecular mechanisms of autophagy.
Autophagy is driven by more than 30 well-conserved proteins (Atgs), from yeasts to mammals [7]. Atg1 (also called Unc51-like kinase 1 (Ulk1)) is a serine/threonine kinase essential for the initiation of autophagy [8]. Autophagy is also regulated by phosphatidylinositol 3-kinase (PI3K) type III, which is a component of a multi-protein complex that includes Atg6 (Beclin1). PI3K promotes invagination of the membrane at domains rich in phosphatidylinositol-3-phosphate (PI3P), which are called omegasomes, to initiate generation of the isolation membrane [9]. Subsequent expansion and closure of isolation membranes are mediated by two ubiquitin-like conjugation pathways as follows: the Atg5–Atg12 pathway and the microtubule-associated protein 1 light chain 3 (LC3) pathway [7]. Ubiquitin-like conjugation of phosphatidylethanolamine (PE) to LC3 facilitates translocation of LC3 from the cytosol to sites of origin of the autophagic membrane. Moreover, the localization of LC3-PE in autophagic membranes makes this complex a reliable marker of autophagy. The suppression of autophagy in Atg5-deficient cells indicates the essential role of the Atg5–Atg12 pathway in autophagy (Figure 2).
Although Atg5 function is crucial for autophagy, we identified an Atg5-independent autophagic pathway, which is induced when cells are severely stressed, for example, by DNA damage but not by nutrient deprivation. The morphology of Atg5-independent autophagic structures is indistinguishable from those that form during Atg5-dependent autophagy, i.e., isolation membrane, autophagosomes, and autolysosomes [10]. We call the Atg5-independent pathway alternative macroautophagy, which is driven by Ulk1 and phosphoinositol 3-kinase complexes at the initiation steps. These molecules function at the initiation of conventional autophagy as well. In contrast, this pathway is not mediated by other components, such as Atg9 and proteins of the ubiquitin-like protein conjugation system (Atg5, Atg7, and LC3), that function to extend conventional autophagic membranes (Figure 2). Because alternative macroautophagy requires the extension of autophagic membranes, several molecules may serve to mediate this function. One such molecule is Rab9, a protein involved in membrane trafficking. Experiments using dominant negative mutants and gene silencing found that Rab9 is essential for membrane expansion and fusion in alternative macroautophagy.
Alternative macroautophagy is not an atypical form of autophagy because it occurs in a wide variety of cells, including embryonic fibroblasts and thymocytes as well as in various tissues such as that of the heart, brain, and liver. It is activated by a variety of stressors but not by rapamycin. Erythrocyte maturation is a representative example of physiological events that involve alternative macroautophagy. Enucleation and the clearance of mitochondria occur during the transition of erythroblasts into reticulocytes, which occurs prior to terminal maturation into erythrocytes, with macroautophagy functioning in the latter process. In contrast, erythrocyte maturation usually occurs in Atg5-deficient embryos [10], indicating that conventional macroautophagy does not eliminate mitochondria from erythrocytes.
Moreover, ultrastructural analysis has demonstrated that autophagic structures in reticulocytes equivalently engulf and digest mitochondria in wild-type and Atg5-deficient embryos. Furthermore, mitochondrial clearance from erythrocytes is significantly altered in Ulk1-deficient embryos in the absence of macroautophagy [11]. Therefore, these data suggest that Ulk1-mediated alternative macroautophagy plays a crucial role in the elimination of mitochondria from erythrocytes. Ongoing research promises to provide a more detailed picture of the physiological and pathological relevance of alternative macroautophagy. In addition to alternative macroautophagy, previous reports have described a Beclin 1-independent type of autophagy [12]. Although conventional, alternative, and Beclin 1-independent macroautophagy generally leads to bulk degradation of cellular proteins, they may also be activated by various stimuli in different cell types and play different physiological roles. For a better understanding of macroautophagy, it is important to classify autophagy-related molecules according to the type of macroautophagy in which they are involved.

It has been suggested that autophagic cell death participates in physiological and pathological events. Although a large body of evidence indicates that the inhibition of apoptosis is critical for tumorigenesis, elimination of cancer cells may also be mediated through autophagic cell death and there is evidence that decreased autophagic activity is related to tumorigenesis. For example, Beclin1 (Atg6) levels are lower in ovarian, breast, and prostate cancer because of monoallelic mutations [18]. Furthermore, mice heterozygous for the beclin1 gene have a higher risk for tumorigenesis [18,19]. Therefore, these findings provide compelling evidence that inhibition of Beclin1 expression contributes to the pathogenesis of cancer. Moreover, previous reports have shown that loss-of-function mutations of Atg5 and LC3 promote myeloma and glioblastoma, respectively [20,21], suggesting that failure of cells to undergo autophagy leads to tumor progression. Although autophagy plays a role in tumor suppression, it also promotes tumor cell growth by supplying nutrients under hypoxic conditions. Cancer cells require several nutrients to accelerate cell proliferation, and studies have shown that nutrient deprivation results in the impairment of tumor growth in some autophagy-deficient cancer cells [22]. Thus, these research findings suggest that autophagy plays dual roles in cancer and well as functions in a context-dependent manner.
Several mechanisms have been proposed to explain the tumor suppressive function of autophagy: (1) accumulation of p62, a substrate of autophagy, leads to NF-κB activation [22]; (2) accumulation of p62 stabilize Nrf2, which imparts tumor cells with resistance to hypoxic stress [23]; (3) retention of damaged organelles, including mitochondria, increases the level of active oxygen species and increases the mutation rate; and (4) defective elimination of cancer cells due to the loss of autophagic cell death [13]. These mechanisms may be cell- and stimulus-type specific; however, we believe that it is reasonable to conclude that the failure of autophagic cell death is one of the most crucial mechanisms for tumorigenesis because autophagic cell death occurs in normal cells (e.g., fibroblasts or thymocytes) but not in most cancer cells. Furthermore, in some cancer cells, the magnitude of JNK activation, a crucial factor for autophagic cell death, is significantly lower compared with that in normal cells after exposure to apoptotic stimuli [13]. In such cancer cells, JNK activity may not reach the threshold level required to induce autophagic cell death. This conclusion is supported by data showing that enforced expression of activated JNK in cancer cells induces autophagic cell death. Taken together, it is likely that insufficient activation of JNK followed by failure of autophagic cell death may induce uncontrolled growth of cells that ultimately acquire the malignant phenotype. 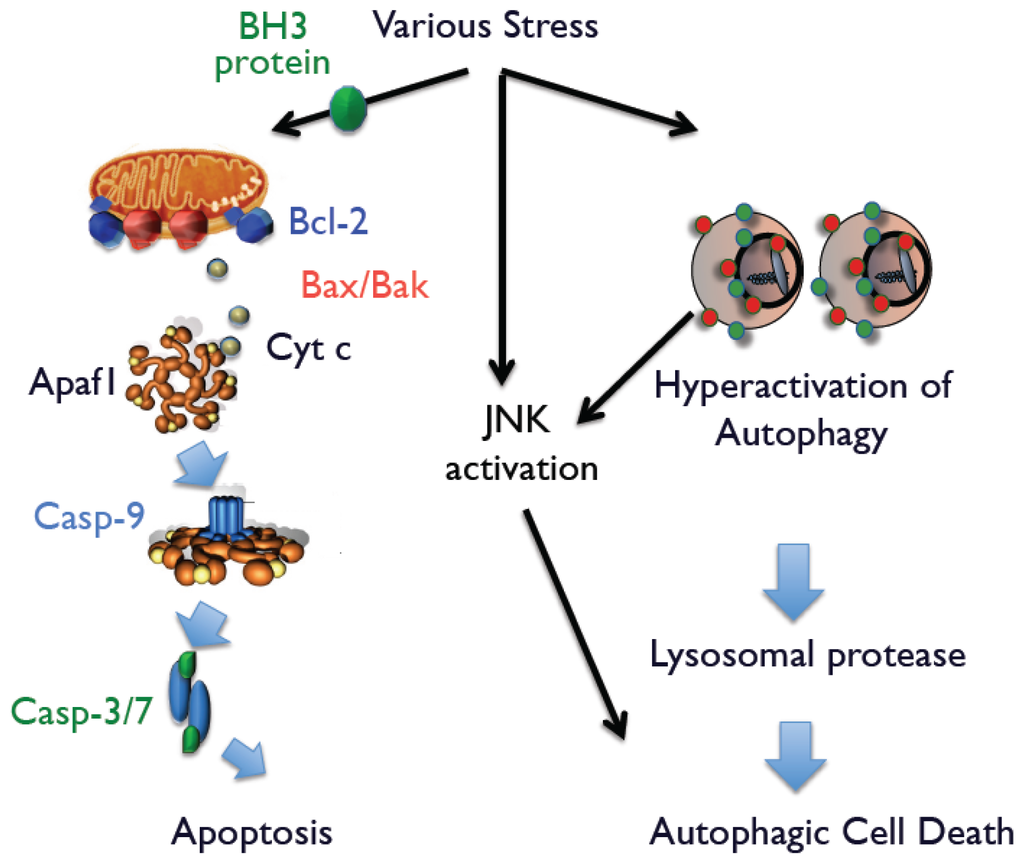 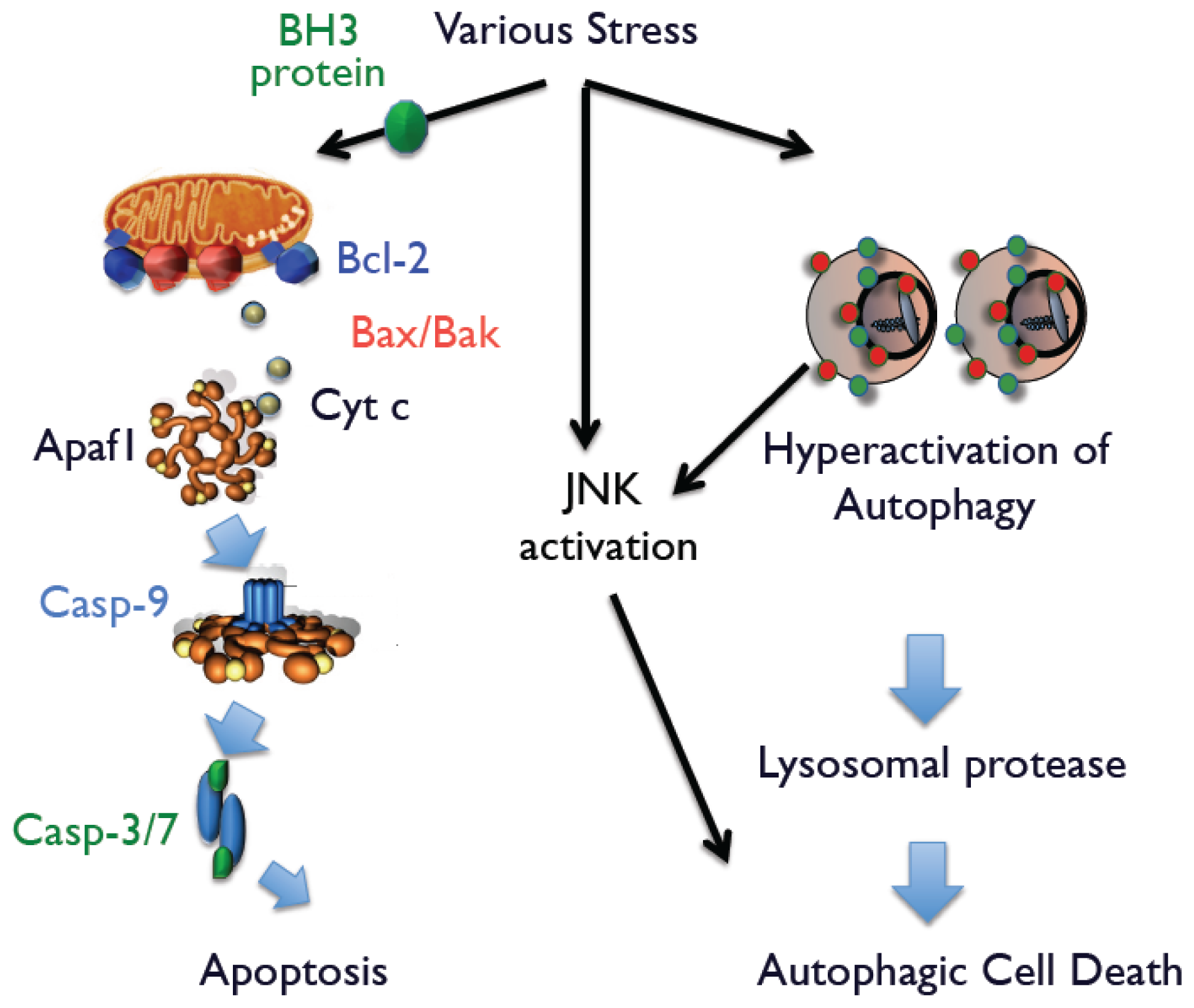