Influence of Genetic Variations on Levels of Inflammatory Markers of Healthy Subjects at Baseline and One Week after Clopidogrel Therapy; Results of a Preliminary Study
Previous Article in Journal

The Cellular and Molecular Carcinogenic Effects of Radon Exposure: A Review
Previous Article in Special Issue

The objective of these investigations was to determine the possible effects of the novel selective estrogen receptor modulator, ospemifene, on cytochrome P450 (CYP)-mediated drug metabolism. Ospemifene underwent testing for possible effects on CYP enzyme activity in human liver microsomes and in isolated human hepatocytes. Based on the results obtained in vitro, three Phase 1 crossover pharmacokinetic studies were conducted in healthy postmenopausal women to assess the in vivo effects of ospemifene on CYP-mediated drug metabolism. Ospemifene and its main metabolites 4-hydroxyospemifene and 4'-hydroxyospemifene weakly inhibited a number of CYPs (CYP2B6, CYP2C9, CYP2C19, CYP2C8, and CYP2D6) in vitro. However, only CYP2C9 activity was inhibited by 4-hydroxyospemifene at clinically relevant concentrations. Induction of CYPs by ospemifene in cultured human hepatocytes was 2.4-fold or less. The in vivo studies showed that ospemifene did not have significant effects on the areas under the plasma concentration-time curves of the tested CYP substrates warfarin (CYP2C9), bupropion (CYP2B6) and omeprazole (CYP2C19), demonstrating that pretreatment with ospemifene did not alter their metabolism. Therefore, the risk that ospemifene will affect the pharmacokinetics of drugs that are substrates for CYP enzymes is low. View Full-Text
Keywords: bupropion; CYP; omeprazole; selective estrogen receptor modulator; warfarin bupropion; CYP; omeprazole; selective estrogen receptor modulator; warfarin
►▼ Show Figures 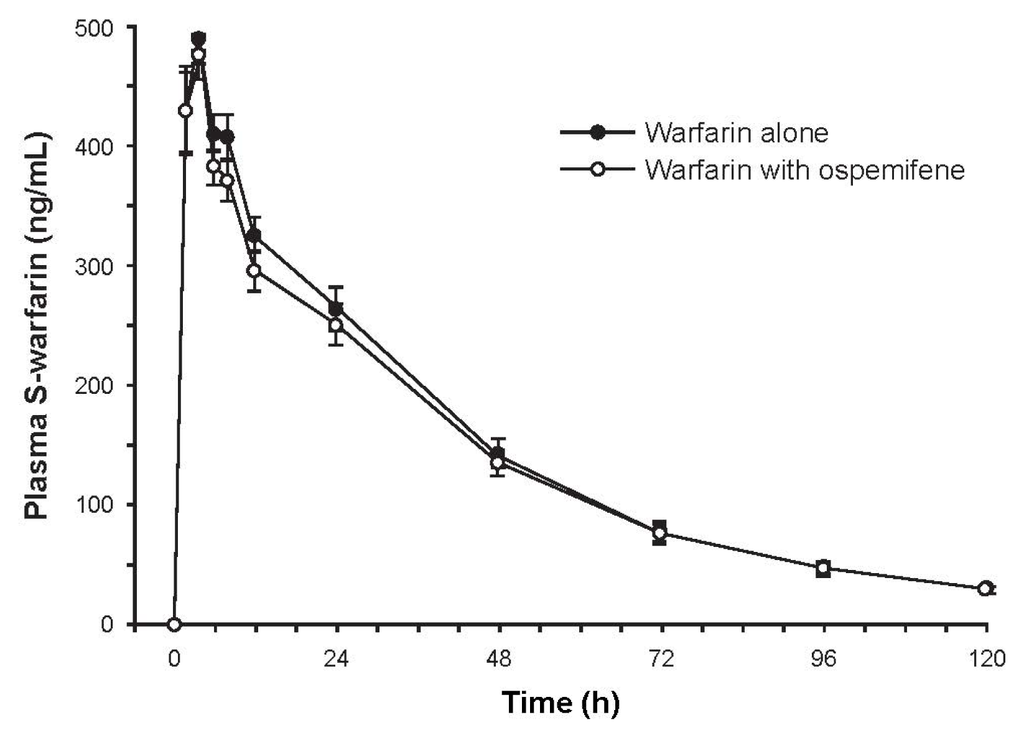