Decidual Macrophages Are Significantly Increased in Spontaneous Miscarriages and Over-Express FasL: A Potential Role for Macrophages in Trophoblast Apoptosis

Persistent cell shrinkage, called apoptotic volume decrease (AVD), is a pivotal event of apoptosis. Activation of the volume-sensitive outwardly rectifying Cl− channel (VSOR) is involved in the AVD induction. On the other hand, activation of the MAP kinase (MAPK) cascade is also known to play a critical role in apoptosis. In the present study, we investigated the relationship between the AVD induction and the stress-responsive MAPK cascade activation during the apoptosis process induced by staurosporine (STS) in HeLa cells. STS was found to induce AVD within 2–5 min and phosphorylation of c-Jun N-terminal kinase (JNK) and p38 MAPK after over 20–30 min. VSOR blockers suppressed not only STS-induced AVD but also phosphorylation of JNK and p38 as well as activation of caspase-3/7. Moreover, a p38 inhibitor, SB203580, and a JNK inhibitor, SP600125, failed to affect STS-induced AVD, whereas these compounds reduced STS-induced activation of caspase-3/7. Also, treatment with ASK1-specific siRNA suppressed STS-induced caspase-3/7 activation without affecting the AVD induction. Furthermore, sustained osmotic cell shrinkage per se was found to trigger phosphorylation of JNK and p38, caspase activation, and cell death. Thus, it is suggested that activation of p38 and JNK is a downstream event of AVD for the STS-induced apoptosis of HeLa cells. View Full-Text
Keywords: apoptosis; MAP kinase; anion channel; shrinkage; volume regulation apoptosis; MAP kinase; anion channel; shrinkage; volume regulation
►▼ Show Figures 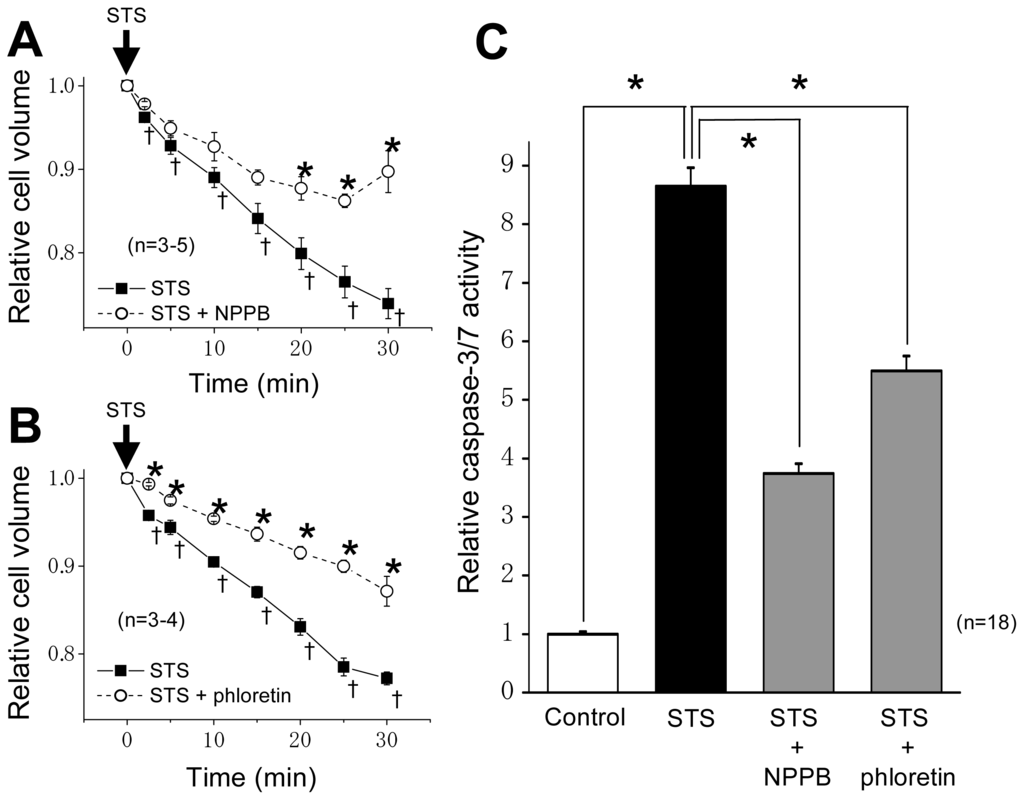