Quantum Dots for Live Cell and In Vivo Imaging

The use of fluorescent nanoparticles as probes for bioanalytical applications is a highly promising technique because fluorescence-based techniques are very sensitive. Quantum dots (QDs) seem to show the greatest promise as labels for tagging and imaging in biological systems owing to their impressive photostability, which allow long-term observations of biomolecules. The usage of QDs in practical applications has started only recently, therefore, the research on QDs is extremely important in order to provide safe and effective biosensing materials for medicine. This review reports on the recent methods for the preparation of quantum dots, their physical and chemical properties, surface modification as well as on some interesting examples of their experimental use.
Keywords: Quantum dots; biosensing; biolabeling; template methods; TiO2 Quantum dots; biosensing; biolabeling; template methods; TiO2

In few past years, researchers in Chemistry and Physics have focused a great part of their interest in fabrication of nanoparticles such as nanowires, quantum dots, nanorods, nanotubes or nanofilms [1]. The reasons for this are the possible applications of nanoparticles in several extremely important fields, e.g. in catalysis, coatings, textiles, data storage, biotechnology, health care, biomedical and pharmaceutical industries. Concerning the medical applications, spherical nanoparticles are the most widely developed and utilized [2]. Nanoparticles can be prepared using metallic, metal oxide–ceramic, polymer, carbon, core-shell, alloy, composite, and biological components.
Nanometer-sized crystals, often referred to as quantum dots (QDs), have been also intensively investigated. Typical QD sizes range between 2–20 nm [3], but according to some literature their diameter should be strictly below 10 nm [4,5]. However, the dimensions of QDs depend mainly on the material used to prepare them. Generally we call a system a QD when the quantum confinement effect occurs, i. e. when the nanoparticle radius a is lower than one of this magnitudes: ae, ah and aexc (Bohr radius of electron, hole and exciton, respectively). It is known the Bohr radius depends on the material (e.g. 36 nm for InAs, 0.7 nm for CuCl, etc.) and therefore there is not a clear line to say that a nanoparticle is a QD or not, if one only considers its size. QDs can be based on metallic (e.g. Ni, Co, Pt, Au) [6] or (mostly) on semiconductor materials. Moreover, some research into metalloid QDs such as silicon has been done [7]. Because of their reduced size, QDs behave differently from bulk solids due to the quantum-confinement effects that are responsible for their remarkably attractive properties. In general, quantization effects in semiconductor structures can be divided into three groups, depending on whether the charge carriers are confined in one, two or three dimensions [8]. Confinement in one direction creates two-dimensional (2D) structures that have been termed quantum wells or quantum films. Carrier confinement in two directions produces one-dimensional (1D) quantum wires and confinement in three dimensions produces already mentioned quantum dots or quantum boxes, where the electrons are mostly localized; these structures are zero-dimensional (0D). Typically, QDs are represented by atomic clusters or nanocrystallites. QDs usually consist of few hundreds to a few millions of atoms, but only a small number of electrons (≤100) are free [9]. In addition, depending on electron confinement, it is possible to distinguish between planar, vertical and self-assembled QDs, whereas the very first experiments were made with the planar structures. In planar and vertical QDs, electrostatic confinement leads typically to dimensions around 100 nm and structural confinement is of the order of 10 nm, while in self-assembled QDs the structures are rather pyramidal or lens-shaped with sizes of approximately 10 nm. These pyramidal QDs are very promising for laser applications [10,11].

2.1. The main criteria for using QDs in Medicine

2.2. Some important applications of QDs

Optical characterization of QDs is usually provided by UV-VIS and photoluminescence spectroscopy, which offer fast, non destructive and contactless option. Hazdra and colleagues employed a rarely used experimental method, photomodulated reflectance spectroscopy, for checking deposited QD structures. This technique provides equivalent energy resolution to that of photoluminescence at low temperatures and probes a wider range of critical points, highlighting the ground state and also many high order interband optical transitions from which band structure, especially of the wetting layer, can be deduced [95].
As already mentioned, the optical properties (fluorescence emission) of QDs can be fine-tuned by the QDs’ size, which is a key parameter that determines the spectral position and purity of photoluminescence. QDs’ size is generally calculated using conventional techniques like scanning electron microscopy (SEM), transmission electron microscopy (TEM), and dynamic light scattering (DLS) studies. Gu and colleagues determined the size and composition of optically active CdZnSe/ZnBeSe QDs using photoluminescence, photoluminescence excitation, and Raman scattering spectroscopies combined with a model of photoluminescence and LO phonon energies [96]. Besides these techniques, field flow fractionation was also successfully employed an excellent complement to characterization of water soluble QDs by the conventional tools [97].
In order to monitor the size of epitaxially prepared QDs, several characterization methods are usually employed, e.g. TEM, atomic force microscopy (AFM) or more preferably scanning tunneling microscopy (STM) as can be seen from Figure 5. Scientists also evaluated InAs QDs’ size from magneto-tunnelling experiments and they found the results in very good agreement with the sizes measured by AFM and TEM [98]. In order to study quantum size effects on the electronic structure of InAs and InGaAs QDs in correlation with their morphologies, scanning tunneling spectroscopy was used in the work of Yamauchi [99].
According to Lees et al., the QDs’ surface chemistry plays also very important role, because it contributes to the final hydrodynamic diameter of QDs and thus it is necessary to find a method providing qualitative information about this parameter [100]. To date a number of different techniques have been employed to characterize QD surface chemistry, notably X-ray photoelectron spectroscopy, nuclear magnetic resonance spectroscopy, and Rutherford backscattering. Lees et al. characterized the surface chemistry and size distribution of ODs using analytical ultracentrifugation method, which was found to be highly sensitive to nanocrystal size, resolving nanocrystal sizes that differ by a single lattice plane.

QDs have been found useful due to their sensing capability for various particular applications, in fields such as optoelectronics and medicine. The main reasons for their use for medical purposes are the following: excitation wavelength far from the emission, inherent photostability and long fluorescent lifetime. It is evident that an appropriate material for biosensing devices will be very different from the one suitable for optical devices. In particular the question of QDs’ toxicity in the former applications is very important, mainly for essays performed in vivo. Therefore scientists are making great efforts to solve this problem, generally by coating QDs surface with protecting and stabilizing shell, in order to use them safely for subsequent bioconjugation with proteins, peptides or other chemical moieties. It was also found that round shape of QDs is preferred when using them in solution for biosensing, so called colloidal QDs, as it was referred in majority of papers, while the deposited QDs with shape of islands are generally required for optoelectronic media.
Concerning the medical applications, there are still several issues, like desirable orientation of attached biomolecules, which remain to be resolved, so it can appear that commercial QDs are more appropriate for some approaches. Hence, it is necessary to continue the QDs research to develop their surface functionalization and conjugation with biomolecules more precisely. From biomolecules detection point of view, it is also interesting to study the behavior of QDs immobilized on variety of supports.

The financial support from grant GACR 102/08/1546 is highly acknowledged. 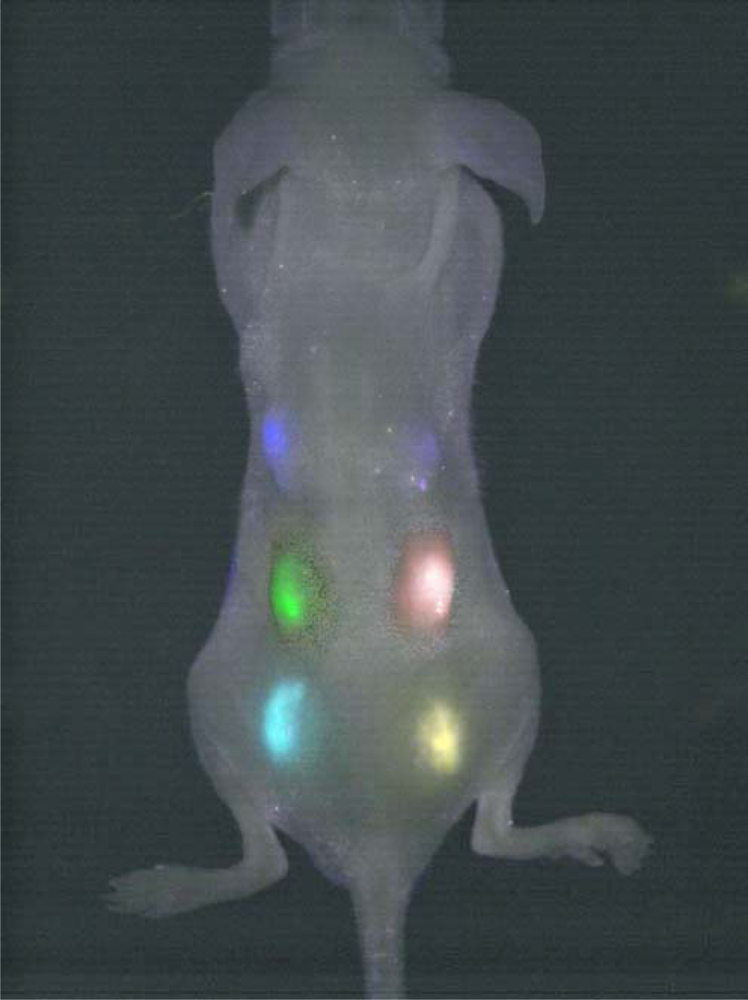 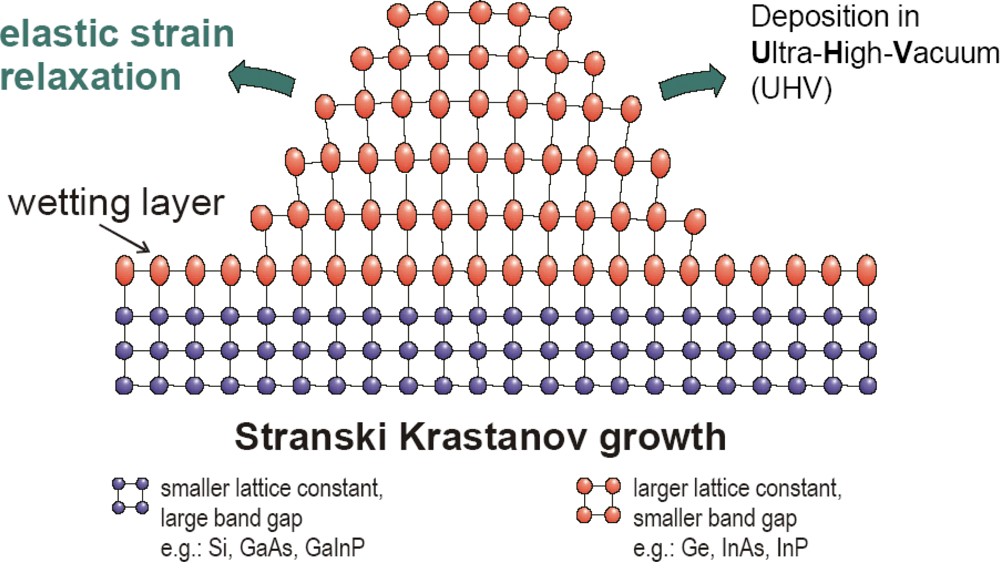 © 2009 by the authors; licensee Molecular Diversity Preservation International, Basel, Switzerland. This article is an open-access article distributed under the terms and conditions of the Creative Commons Attribution license ( http://creativecommons.org/licenses/by/3.0/).