Binding of Natural and Synthetic Polyphenols to Human Dihydrofolate Reductase

Chelation of Cu(II), Zn(II), and Fe(II) by Tannin Constituents of Selected Edible Nuts

The tannin fractions isolated from hazelnuts, walnuts and almonds were characterised by colorimetric assays and by an SE-HPLC technique. The complexation of Cu(II) and Zn(II) was determined by the reaction with tetramethylmurexide, whereas for Fe(II), ferrozine was employed. The walnut tannins exhibited a significantly weaker reaction with the vanillin/HCl reagent than hazelnut and almond tannins, but the protein precipitation capacity of the walnut fraction was high. The SE-HPLC chromatogram of the tannin fraction from hazelnuts revealed the presence of oligomers with higher molecular weights compared to that of almonds. Copper ions were most effectively chelated by the constituents of the tannin fractions of hazelnuts, walnuts and almonds. At a 0.2 mg/assay addition level, the walnut tannins complexed almost 100% Cu(II). The Fe(II) complexation capacities of the tannin fractions of walnuts and hazelnuts were weaker in comparison to that of the almond tannin fraction, which at a 2.5 mg/assay addition level, bound Fe(II) by ~90%. The capacity to chelate Zn(II) was quite varied for the different nut tannin fractions: almond tannins bound as much as 84% Zn(II), whereas the value for walnut tannins was only 8.7%; and for hazelnut tannins, no Zn(II) chelation took place at the levels tested.
Keywords: walnuts; hazelnuts; almonds; tannins; metal chelating capacity; Fe(II); Cu(II); Zn(II) walnuts; hazelnuts; almonds; tannins; metal chelating capacity; Fe(II); Cu(II); Zn(II)

Phenolic compounds constitute a very diversified group of plant secondary metabolites in terms of structure, molecular weight and physicochemical and biological properties. Edible nuts, among others, can serve as a source of phenolic compounds in a human diet [1]. Phenolic compounds of nuts are located mainly in the skins covering kernels. Removing of skin from walnuts decreased the total phenolic content by 90%, approximately, and in case of other nuts by ca. 50% [2]. Almonds, hazelnuts and walnuts contain a variety of low-molecular-weight phenolic compounds, including phenolic acids (caffeic, p-coumaric, protocatechuic, vanillic, gallic, sinapic, p-hydroxybenzoic, chlorogenic, ellagic acids), flavonols (quercetin, isorhamnetin, kaempferol, morin) and/or their glycosides, flavanones (naringenin, eriodictyol) and/or their glycosides, flavan-3-ol monomers (catechin, epicatechin), dimers and trimers. [3–7]. The above mentioned nuts are also rich in tannins. Condensed tannins with degrees of polymerisation up to 10 (oligomers), as well as higher (polymers) are present in seeds of all those nuts [8]. Tannin fractions comprising constituents reacting with vanillin/HCl reagent, were isolated using Sephadex LH-20 column chromatography from almond kernels [9] as well as skins of hazelnuts [10]. The richest source of condensed tannins among the above mentioned nuts is hazelnuts and they comprise (epi)catechin or (epi)gallocatechin subunits [8]. All three flavan-3-ols, which are common in proanthocyanidin structures: (epi)catechin, (epi)gallocatechin and (epi)afzelechin, were identified as subunits of condensed tannins from almonds [11]. Condensed tannins of walnuts are constituted by (epi)catechin units, however their content in seeds is seven times lower than in hazelnuts [8]. Walnut seeds are characterised by a low content of proanthocyanidins, but a high content of hydrolysable tannins [12]. Fukuda et al. [13] and Ito et al. [14] identified and isolated more than 20 hydrolysable tannins from the extract of walnuts. Those tannins comprised mainly of ellagitannins, but gallotannins were also present.
Tannins exhibit strong antioxidant properties in comparison to low molecular weight phenolic compounds [9,15,16]. Antioxidant properties of tannins can result from their free radical scavenging activity [15,17,18] but their ability to chelate transition metal ions, especially Fe(II) and Cu(II), also plays an important role. Metal ions can generate highly reactive oxygen free radicals by Fenton or Haber-Weiss chemistry. In the Fenton reaction the hydroxyl radical (HO•) is produced from hydrogen peroxide. In the iron-catalysed Haber-Weiss reaction the superoxide radical (O2•−) reduces ferric to ferrous ions, which then are again involved in generating of hydroxyl radical [19]. Extremely reactive hydroxyl radicals can interact with many biological macro- and small molecules and therefore lead to lipid peroxidation, DNA damage and polymerisation or denaturation of proteins. The binding of transition metal ions by tannins can stabilize prooxidative activity of those ions [20,21].
Literature resources provide papers on metal ion chelating ability of commercially available tannins [20–23]. Yet data on complexing of ion metals by tannins isolated from plant extracts are scarce. Therefore, the aim of this study was to characterise the tannin fractions obtained from three edible nuts and to examine their ability to chelate Fe(II), Cu(II) and Zn(II). The knowledge of those properties can be applied in future studies aimed at elucidating the mechanisms of antioxidant action of tannins present in nut seeds.

The raw seeds of hazelnuts, walnuts and almonds with their skins on were acquired at local market in Olsztyn. Poland.

Ground and defatted with hexane hazelnuts, walnuts and almonds were extracted with 80% acetone (v/v) according to procedure of Amarowicz et al. [41]. Lyophilised extracts (2 g) were dissolved in 20 mL of ethanol and applied into a column (5 × 40 cm) packed with Sephadex LH-20 gel. At first low molecular weight phenolic compounds were eluted with ethanol (1 L). Part of lower molecular hydrolysable tannins as well as procyanidins, including most momoners and some dimmers and trimers could have been coeluted in this step. Then 600 mL of acetone:water (1:1, v/v) was used to elute tannins [42]. Acetone was removed using rotary evaporator, and aqueous residue was lyophilised.

The content of condensed tannins in fractions was determined according to a modified vanillin assay [43]. To 1 mL of fractions dissolved in methanol (at a concentration of 1 mg/mL), 5 mL of vanillin/HCl reagent [0.5 g vanillin in 4% hydrochloric acid in methanol (v/v)] was added. Absorbance at 500 nm using Beckman DU 7500 diode array spectrophotometer (Beckman Instruments Inc., USA) was recorded after 20 min of samples standing in darkness. Parallel control samples (without vanillin) were prepared. Results were calculated using the standard curve for (+)-catechin (0.2–0.8 mg/mL, r2 = 0.997) and expressed as mg catechin equivalents (CE) per gram of tannin fraction.

The bovine serum albumin (BSA) precipitation ability of samples was examined using method developed by Hagerman and Butler [44]. Briefly, to 2 mL of BSA (concentration of 1 mg/mL in 0.2 M acetic buffer, pH 5.0 with 0.17 M NaCl) 1 mL of tannin fractions in water (1 mg/mL) was added. Samples were allowed to stand for 15 min at room temperature and then were centrifuged at 5,000 g for 15 min. The supernatant was removed, and pellet was dissolved in 4 mL of water solution of 1% SDS and 5% triethanolamine. Then 1 mL of 0.01 M FeCl3 in 0.01 M HCl was added. The samples were left for 30 min at room temperature and the absorbance at 510 nm was measured. Results were calculated using the standard curve for tannic acid (0.2–1.0 mg/mL, r2 = 0.996) and expressed as mg tannic acid equivalents (TAE) per gram of tannin fraction.

A SE-HPLC method was employed to examine the molecular weight distribution of nut tannin fractions obtained from Sephadex LH-20 separation. The samples were dissolved in 45% acetonitrile (v/v) with 0.1% TFA (v/v) at concentration 2 mg/mL and analysed using a Shimadzu HPLC system (Shimadzu Co., Japan) consisting of LC-10ADVp pumps, SCL-10AVp system controller and UV-VIS SPD-M10AVp photo-diode array detector. The TSK-GEL® G2000SWXL column (7.86 × 300 mm, 5 μm, Tosoh Co., Japan) was employed. The mobile phase of 45% acetonitrile with 0.1% TFA was delivered at a rate of 0.2 mL/min. The detection was monitored at 280 nm and the injection volume was 20 μL. Gallic acid, procyanidin B2 and tannic acid with molecular weights 170, 578 and 1701, respectively, were used as standards.

In order to determine Cu(II) and Zn(II) chelation capacity, tannin fractions were dissolved in 0.01 M hexamine/HCl buffer with addition of 0.01 M KCl, pH 5.0 [30]. The samples were diluted in the range 0.2–1.0 mg/mL or 1–5 mg/mL to determine bound Cu(II) and Zn(II), respectively. CuSO4 × 5H2O or ZnCl2 were dissolved in the same buffer at concentration of 0.25 mM and 0.8 mM, respectively. Tannin solution (1 mL) was mixed with 1 mL of salt solution, then 0.1 mL of tetramethylmurexide at concentration of 1 mM was added. Absorbance was recorded at 482 nm [Cu(II)] or 462 nm [Zn(II)] and 530 nm [Cu(II) and Zn(II)] and the ratio of A482/A530 [Cu(II)] or A462/A530 [Zn(II)] was calculated. Control samples were prepared in the same way: redistilled water was added instead of TMM reagents. A standard curve of absorbance ratio vs. metal ions concentration was prepared; Cu(II) in the range of 0.025–0.125 mM and Zn(II) from 0.2 to 2.0 mM. The percentage of bound metal ions was calculated.
Fe(II) chelation activity of tannin fractions from hazelnuts, walnuts and almonds was examined using ferrozine [45]. Tannin fractions were dissolved in water at a concentration in the range of 0.2–1.0 mg/mL. Solutions (2.5 mL) were mixed with 0.25 mL of 0.4 mM FeCl2 × 4H2O, then 0.5 mL of 5 mM ferrozine was added. Then reaction mixture was left for 10 min at room temperature and absorbance at 562 nm was measured. Control samples were prepared in the same way, but water was added instead of ferrozine solution. The percentage of Fe(II) bound was calculated.

This study revealed that tannin fractions obtained from walnuts, hazelnuts and almonds seeds by Sephadex LH-20 column chromatography were able to chelate copper and iron ions, while zinc ions were only bound significantly by almond and hazelnut tannins. Among the metal ions tested, the effectiveness of chelation by the constituents of nut tannin fractions decreased in the order Cu(II) > Fe(II) > Zn(II). The exception was the case of tannin from almonds, which chelated more zinc than iron ions. The chelating capacity of individual tannin fractions analysed varies for different complexed metals and it cannot be pointed out which fraction is the best chelator of metal ions. No relationship was found between molecular weight or type of tannins present in isolated nut fractions and their ability to chelate Cu(II), Fe(II) and Zn(II). Tannin fraction from walnuts containing mainly hydrolysable tannins hardly complexed Zn(II), whereas its Cu(II) chelating capacity was much higher than the fractions isolated from almonds and hazelnuts, which comprise mainly proanthocyanidins. Oligomers of hazelnuts tannins which possess higher molecular weights than condensed tannins of almonds fraction, complexed Cu(II) stronger, but Fe(II) and Zn(II) less effectively.

Reported studies were carried out with financial support of the Polish Ministry of Science and Higher Education under Research Project No. 2P06T 08529, and thanks are extended. 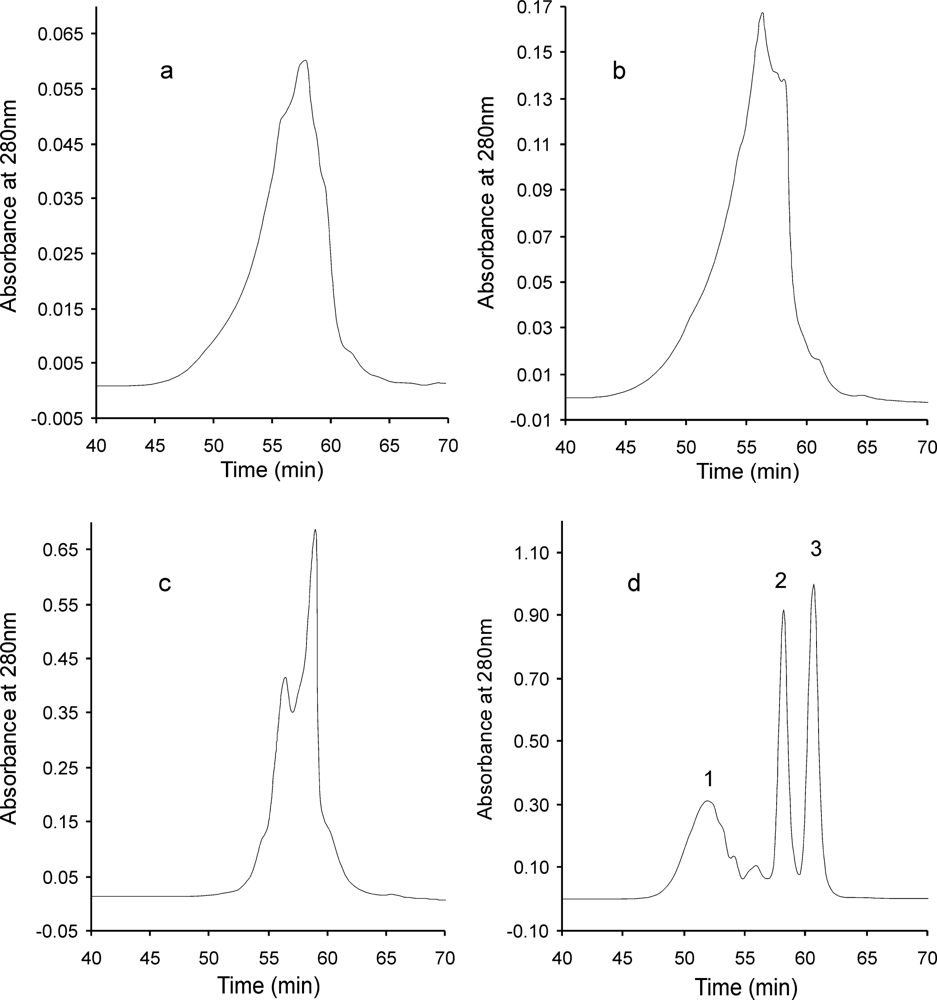 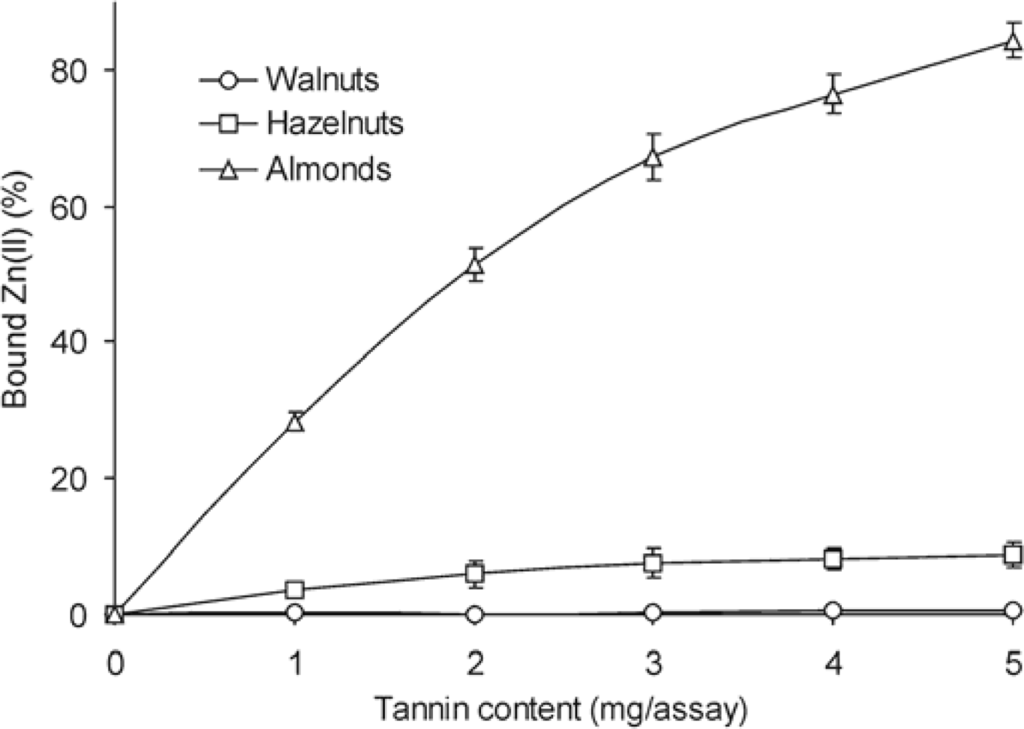 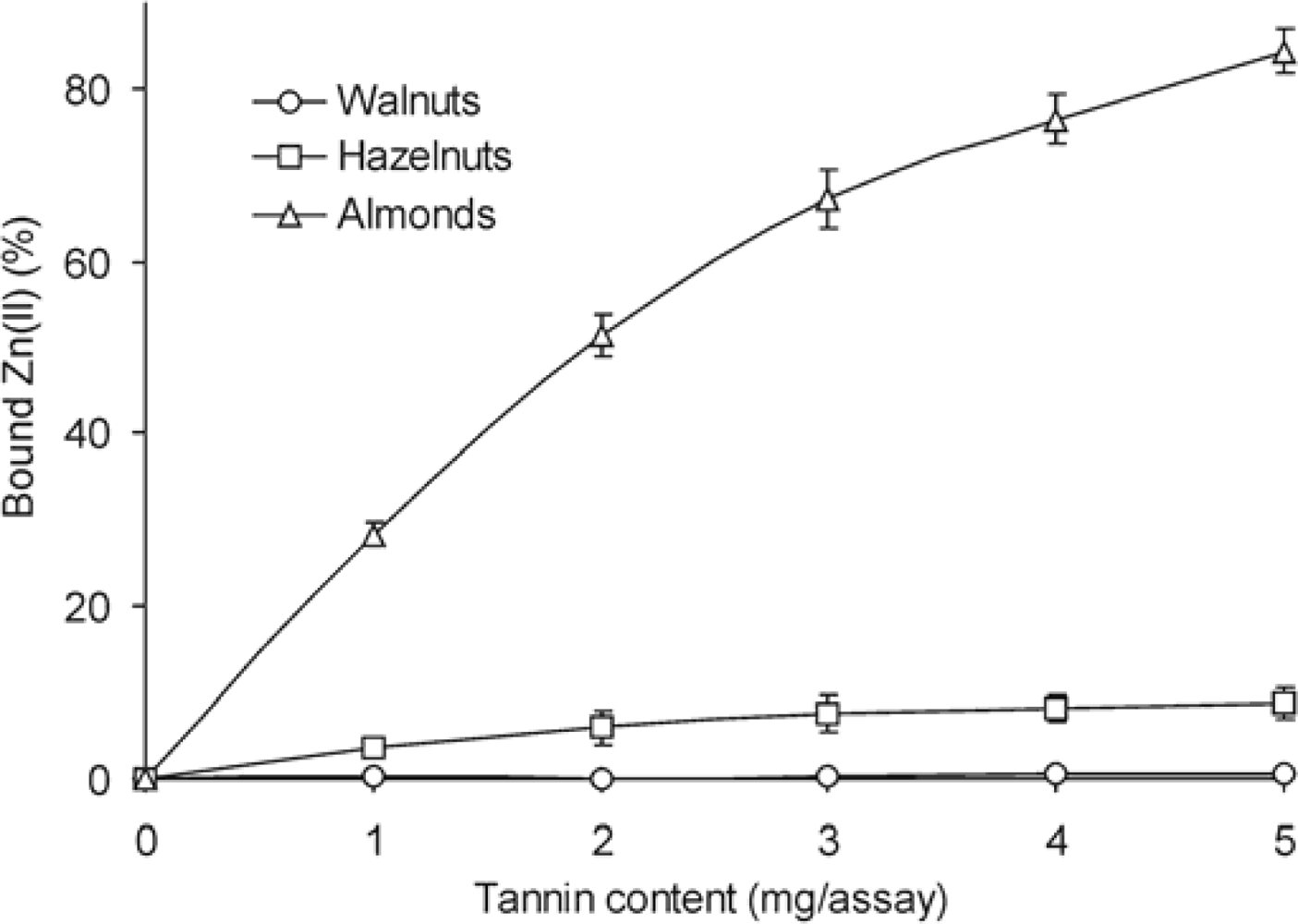 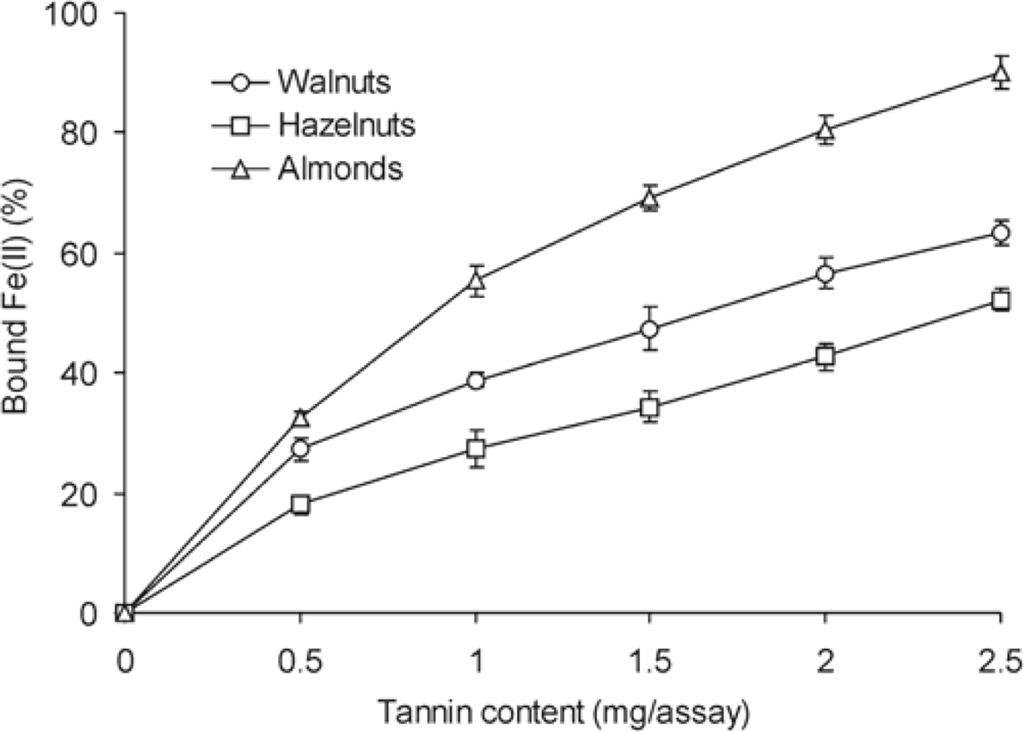 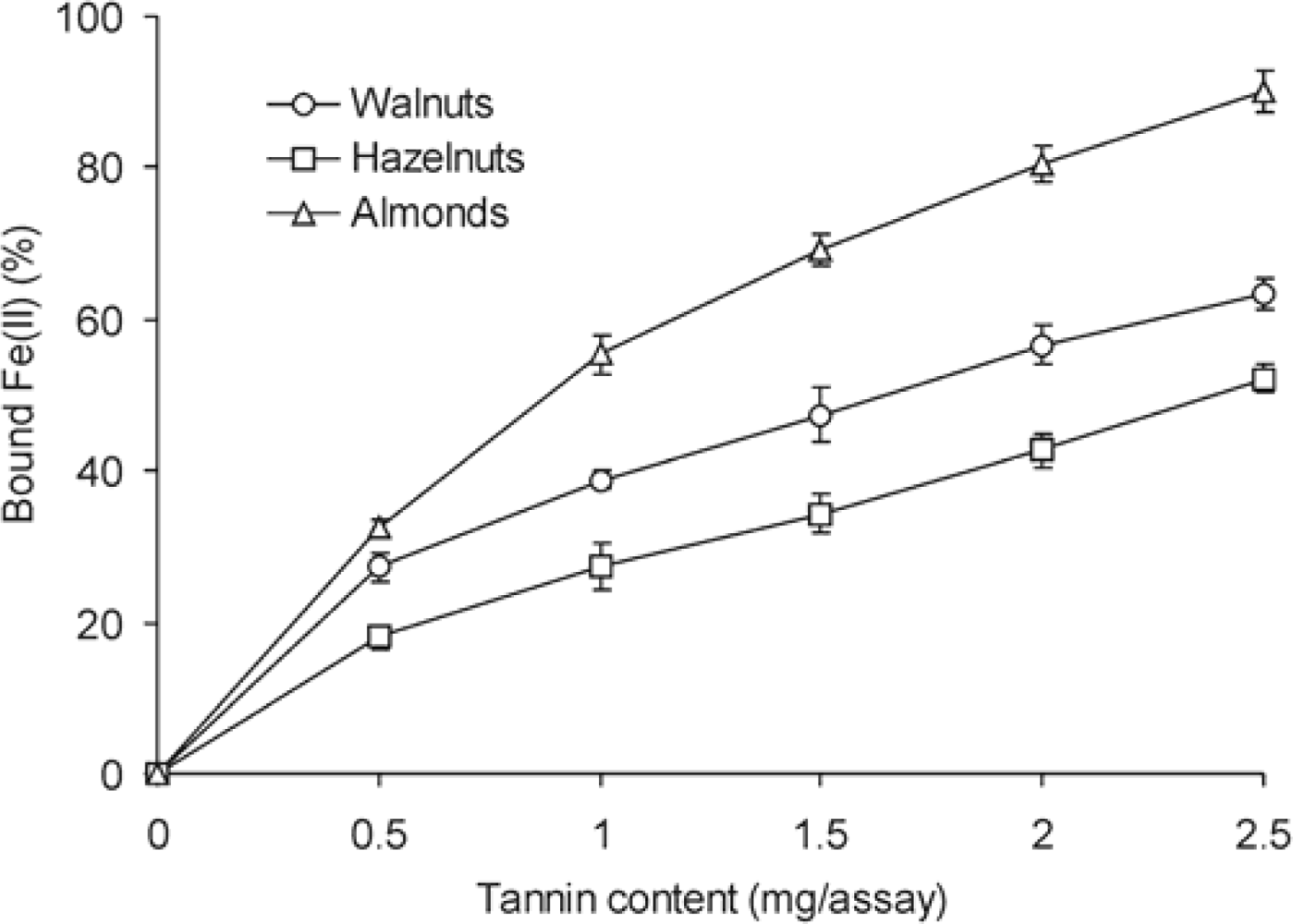