A Study of the Crystallization, Melting, and Foaming Behaviors of Polylactic Acid in Compressed CO2

For polymeric materials, especially for those with regular chain structures, crystallization is a general phenomenon and a very important process because it controls the polymer’s structural formation and thereby strongly influences the final products’ properties [1]. Polylactic acid (PLA) is one kind of biodegradable polymer being produced from annually renewable resources. There is a growing interest in it for many applications [2–6]. Unfortunately, the crystallization of linear PLA occurs too slowly for it to develop significant crystallinity. This is especially so during the nonisothermal conditions encountered in normal extrusion and injection molding processes, where it is hard to achieve high PLA crystallinity in a short time. PLA exhibits a glass transition temperature in the range of 50–60 °C. Below that temperature, PLA is rigid and brittle. Developing high crystallinity in PLA tends to increase the modulus and strength of elasticity as well as the service temperature [3–5]. Therefore, the question of how to enhance crystallization behavior and increase crystallinity has been widely discussed in the PLA processing field.
It has been reported that PLA samples with high crystallinity have been obtained by employing such methods as isothermal annealing [7–9], polymer blending [10–13] or compounding with inorganic particles [14–16], and strain-induced crystallization [17–19]. In particular, solvent-induced crystallization has produced PLA materials with high crystallization; however, that process uses organic solvents, which are difficult to eliminate from the final product and are not environmentally friendly. Hence, the final product would be inappropriate for use in medical applications. Technology based on supercritical CO2 is considered to be a solution to problems associated with the use of biomaterials involving polymers.
It is well established that CO2 is a readily available, inexpensive, and environmentally benign gas. It exhibits tunable liquid-like solubility and gas-like viscosity under supercritical fluid conditions, which can be readily accessed due to its relatively low critical point at Tc = 31.1 °C and Pc = 7.37 MPa. It has been shown that supercritical CO2 can swell and plasticize glassy polymers, leading to a depression of their glass-transition temperature (Tg) to almost the same degree as is affected by solvents or vapors [20]. This remarkable depression in Tg means increased mobility in polymer chains, and hence allows for a fast relaxation, which subsequently resulting in a fast crystallization of the semicrystalline polymers, such as polyaryl ether ether ketone (PEEK) [21], PC [22–26], and even in the non-thermally crystallizable polymers, such as tert-butyl PEEK, at any temperature between Tg and the degradation temperature [27]. A wealth of papers dealing with CO2-induced crystallization in PLA [18,28,29] and PLLA [30–33] has been published in the past 10 years. However, very few of these have investigated the crystallization and melting behaviors of PLA at broad treatment temperature and gas pressure scopes.
Strain-induced crystallization is another factor that can enhance crystallinity development in polymers. According to previous report [17–19], crystal structure could be developed in amorphous PLA films when uniaxial or biaxial stretching was applied to the polymer. In polymer foaming processes with compressed CO2, cell nucleation occurs as a result of gas supersaturation, and then is followed by cell growth. A biaxial extensional flow is always formed in the cell walls during cell growth, which may initiate crystallization [18]. As a consequence, the foaming process may play a positive role in accelerating PLA crystallization. This phenomenon has been partially confirmed with PLLA by using batch foaming [30], where the crystallinity of PLLA is significantly increased from 5.2% (after CO2 saturation at 2 MPa) to 23.4% (after foaming at 100 °C for 30 s). However, it was hard to attribute all crystallinity development to the process of strain-induced crystallization, as exposure to a high temperature during foaming might also affect this behavior in PLLA. In another study, Mihai et al. [18] found that both CO2 exposure and the stretching process could induce PLA crystallization. However, it was difficult for them to separate the individual effect of CO2 exposure and the foaming process on the crystallinity of the final PLA samples.
In the present study, a linear PLA exhibiting a low crystallization rate at atmospheric pressure was selected. After being saturated with compressed CO2 at different pressures and temperatures for various lengths of time, the PLA’s crystallization and melting behavior were investigated to show the possible effects of processing parameters, such as treatment time, temperature, and pressure. The needed time for crystallization equilibrium and equilibrium crystallinity were determined, and the possible effects of temperatures on them were discussed. Also, PLA tended to foam after being saturated under some conditions, so a foaming window was established. Based on this window and the cell morphology of foams, we try to explain the individual effects of CO2-induced crystallization and strain-induced crystallization on the final crystallinity of PLA.

2.2. Cold-crystallization and Melting Behavior of PLA Treated by CO2

Amorphous PLA films were treated under compressed CO2, and the different processing parameters of temperature, pressure, and time were used during the treatment process. DSC was used to investigate the cold-crystallization and melting behavior of the PLA samples in this study.

Figure 7 shows the DSC curves of PLA samples treated at different pressures and at 25 °C and 100 °C for 2 h. All PLA samples do not have a cold-crystallization peak at 6.89–17.25 MPa. Furthermore, with the increased pressure, the melting peak and endothermic area do not show any obvious change. This was further verified by the crystallinity as shown in Figure 8, where the crystallinity of PLA is 27.4% (6.89 MPa), 26.8% (10.35 MPa), 27.0% (13.80 MPa), and 27.5% (17.25 MPa) at 25 °C; and 38.9% (6.89 MPa), 38.3% (10.35 MPa), 38.8% (13.80 MPa), and 39.2% (17.25 MPa) at 100 °C. Therefore, there was almost no CO2 pressure dependence at the melting point and ΔHm, despite the presence of a transition in CO2 properties from a subcritical to a supercritical condition.
It is known that an increase in CO2 pressure tends to increase the mobility of polymer chains and lower Tg [32]. Therefore, transformation of the amorphous phase of polymer to a lower free energy crystalline structure is kinetically favorable [26]. However, increased CO2 pressure did not obviously affect the crystallization thermodynamics of PLA. A possible explanation for this may be that the compact crystallite structure restricted the solubility of CO2 in the crystal region, which then decreased the effect of CO2 pressure on crystalline thermodynamics [26]. A similar effect of CO2 pressure on the melting peak and crystallinity has been observed in PLLA [30,33] and PC [22,24–26]. It was found that the melting behavior of PLLA did not change at a CO2 pressure of 3–5 MPa [30] and 3–15 MPa [33]. At a much lower CO2 pressure of 1 MPa and 2 MPa, however, Wang et al. [30] reported that the crystallinity of PLLA was much lower than that of 3 MPa.
In summary, linear PLA exhibited a low crystallization rate, and 10 h were normally needed to induce PLA crystallization at atmospheric pressure. The CO2 treatment significantly increased the crystallization rate of PLA; a high crystallization of 16.5% could be obtained even within the short time of 1 min. It is believed that the high plasticization effects of compressed CO2 accelerated the crystallization rate of PLA.

2.3. The Induced Crystallization of PLA during the Foaming Process

A commercial linear PLA (Ingeo™, 2002D) in pellet form was provided by Natureworks LLC, USA. According to the supplier, its d-isomer content is 4.3%, melt flow rate is 5–7 g/10 min, and its density is 1.24 g/cm3. CO2 with a purity of 99.5% (Linde gas) was used as the physical blowing agent in all experiments. The PLA pellets were dried in the oven for 4 h at 80 °C before use. Then, polymer specimens with a thickness of about 0.3 mm were prepared by compression molding at 200 °C. The samples were cut into disc-shaped sheets for CO2 treatment.

A high-pressure apparatus was used for compressed CO2 treatment. The 0.3 mm-thick PLA film was placed in a high-pressure vessel preheated to the experimental temperature. The vessel was flushed with low-pressure CO2 for about 1 min and then pressurized to the desired value. Once the CO2 pressure reached the desired value, the timing began. At the end of the experiment, the vessel was released at a low depressurization rate, and the sample was removed quickly from the vessel.

DSC measurements were carried out to determine the Tg, cold crystallization temperature (Tc) and melting peak (Tm) by using a Q2000 (TA Instruments) that was calibrated with indium. All measurements were made at a heating rate of 10 °C/min over a temperature range of 20–200 °C in a dry nitrogen environment. The enthalpy of crystallization on heating ΔHc and melting enthalpy ΔHm were measured. The crystallinity of PLA CO2-treated samples was calculated by [(ΔHm ΔHc)/ΔHf] × 100%, where ΔHf is the theoretical heat of fusion of 100% crystalline PLA with a value of 93 J/g [39]. Isothermal crystallization from the amorphous state was used to measure the crystallization rate of PLA. The samples were first heated to 200 °C at a rate of 10 °C/min to eliminate any thermal history, and then quickly cooled to the present crystallization temperature to initiate isothermal crystallization. In the isothermal crystallization study, the samples were held at the crystallization temperature for 10 h. For CO2-treated PLA samples, the first heat scanning curve was used to calculate crystallinity.
WAXD measurements were taken on a Siemens D5000 diffractometer equipped with a Kevex solid-state detector that uses a Cu Kα radiation source with a wavelength of 1.54Å. The measurements were performed at 50 kV and 35 Ma. The data were recorded in reflection mode at a range of 2θ = 5–35° using a STEP scan mode. The step size was 0.02 degrees and the counting time was 2.0 s per step.
After being saturated by compressed CO2, PLA samples tended to foam under some conditions during the gas release process. Cell morphologies of the foamed samples were observed with a JEOL JMS 6060 scanning electron microscope (SEM). Prior to the SEM observation, the samples were freeze-fractured in liquid nitrogen and sputter-coated with platinum. The volume expansion ratio of the polymer foams can be calculated according to Equation (1): where ρ and ρf are the mass densities of the samples before and after foaming, respectively, which were measured by the water displacement method in accordance with ASTM D792.

The authors are grateful to the Consortium of Cellular and Micro-Cellular Plastics (CCMCP) and the Natural Sciences and Engineering Research Council of Canada (NSERC) for their financial support of this project. 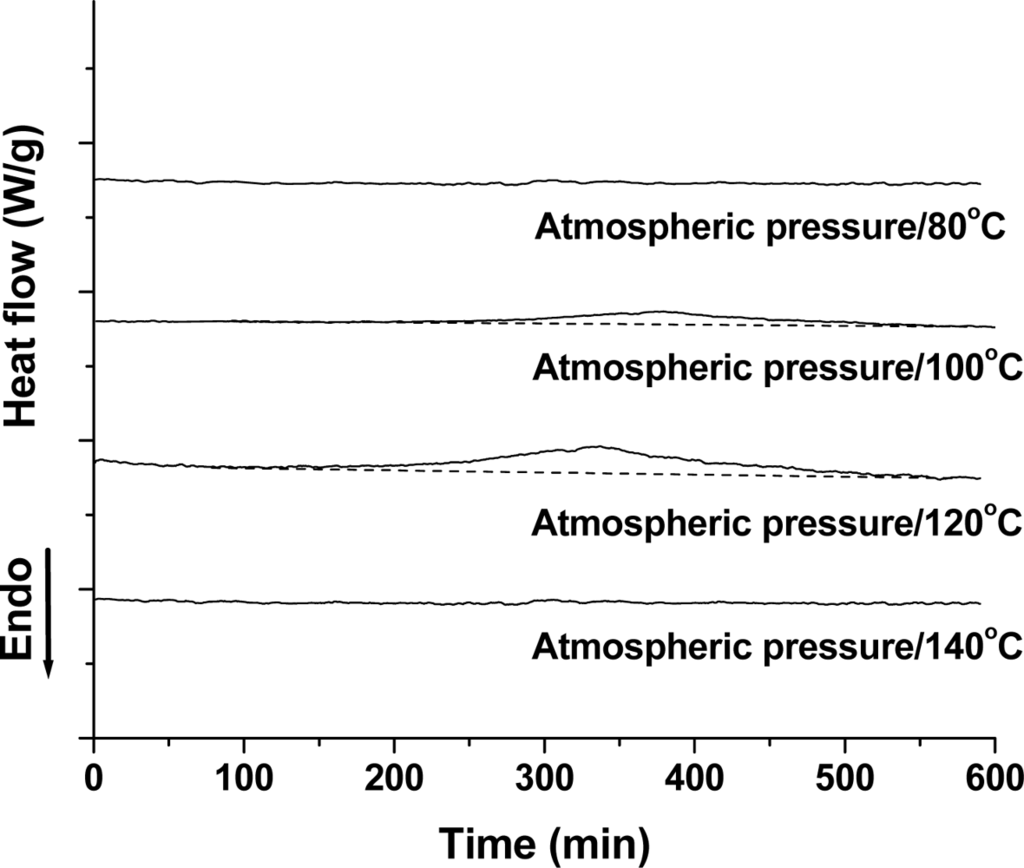 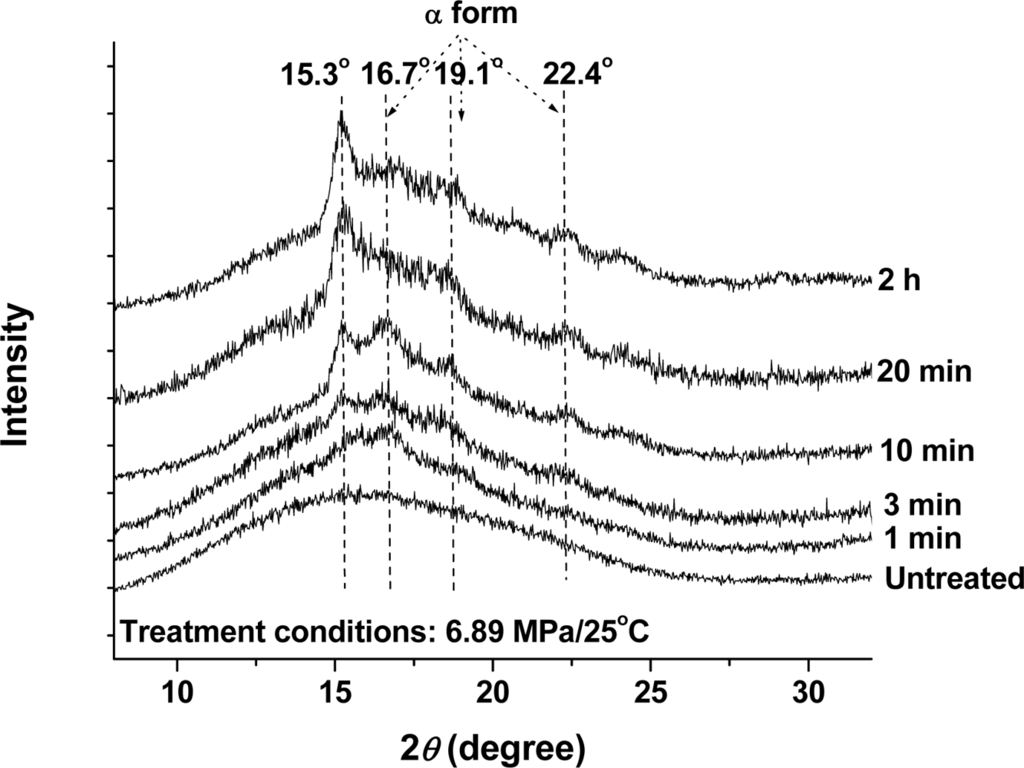 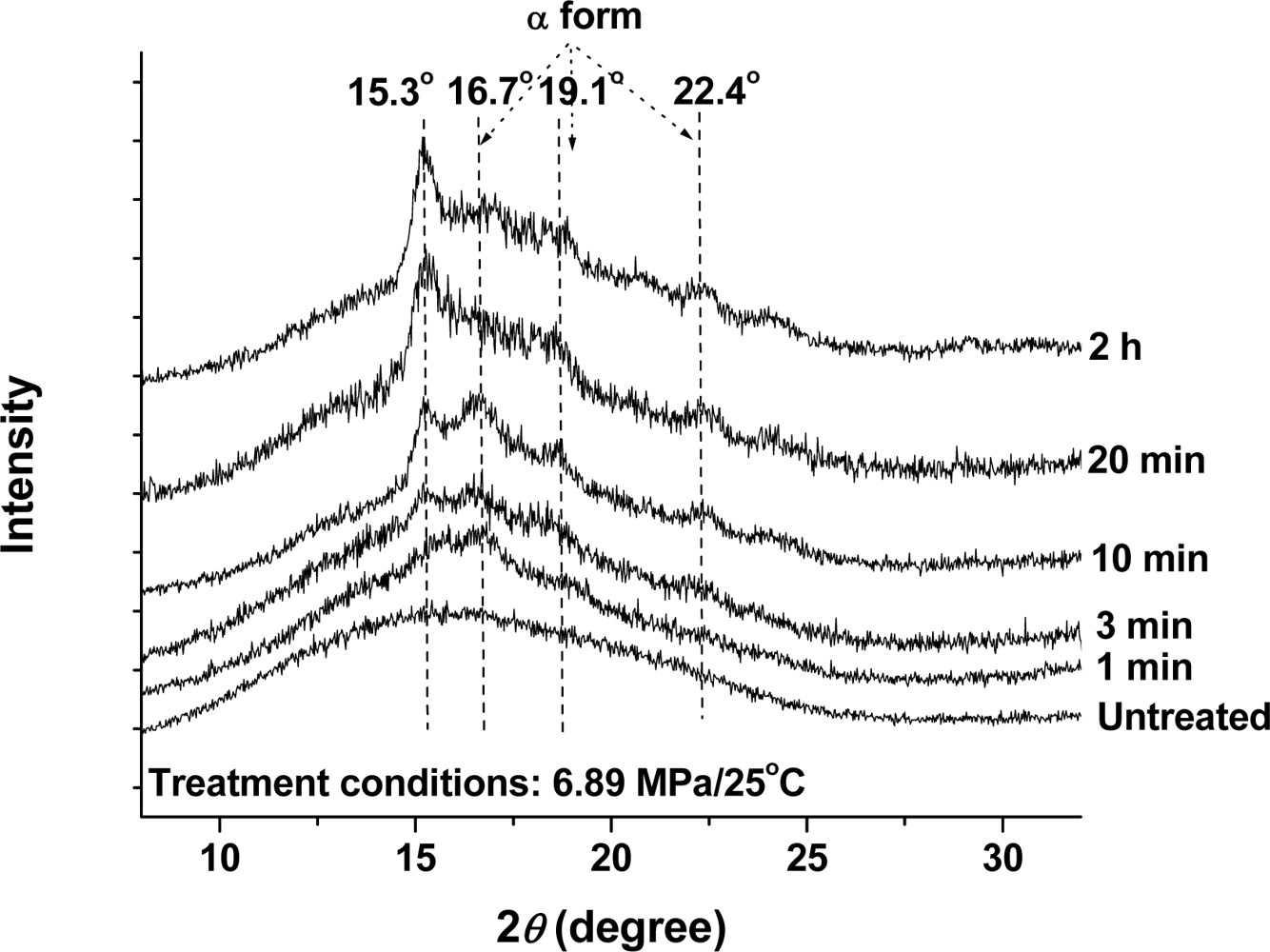 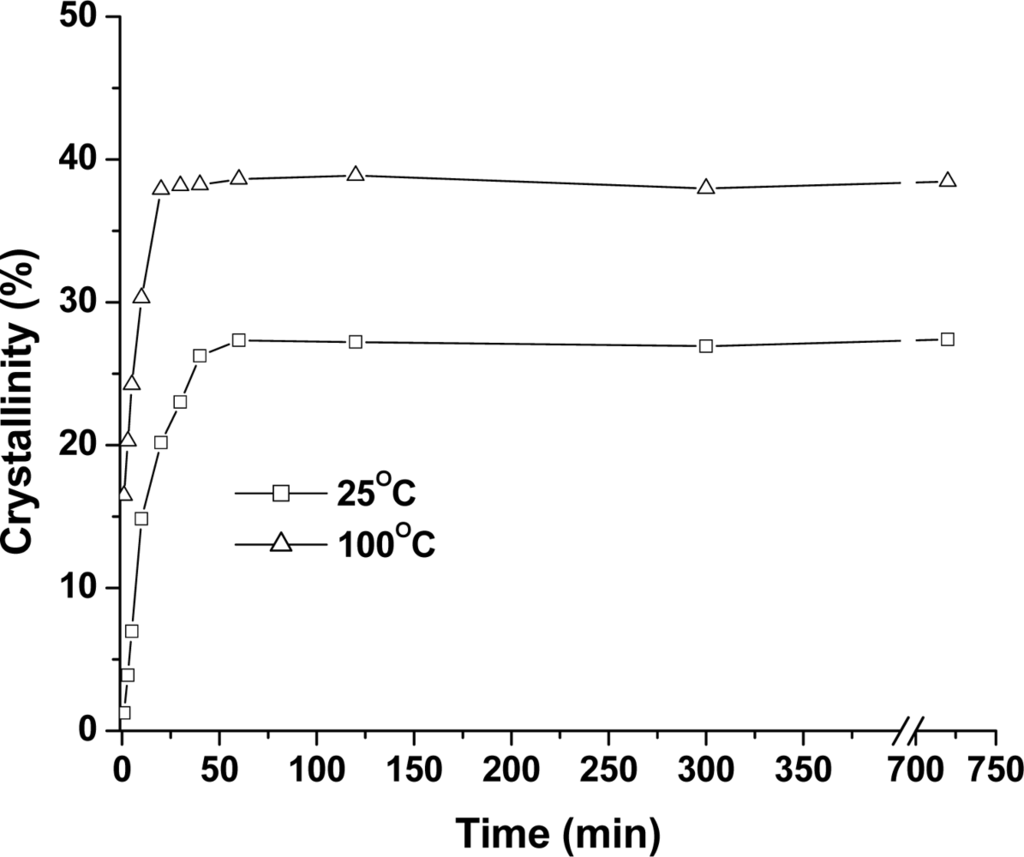 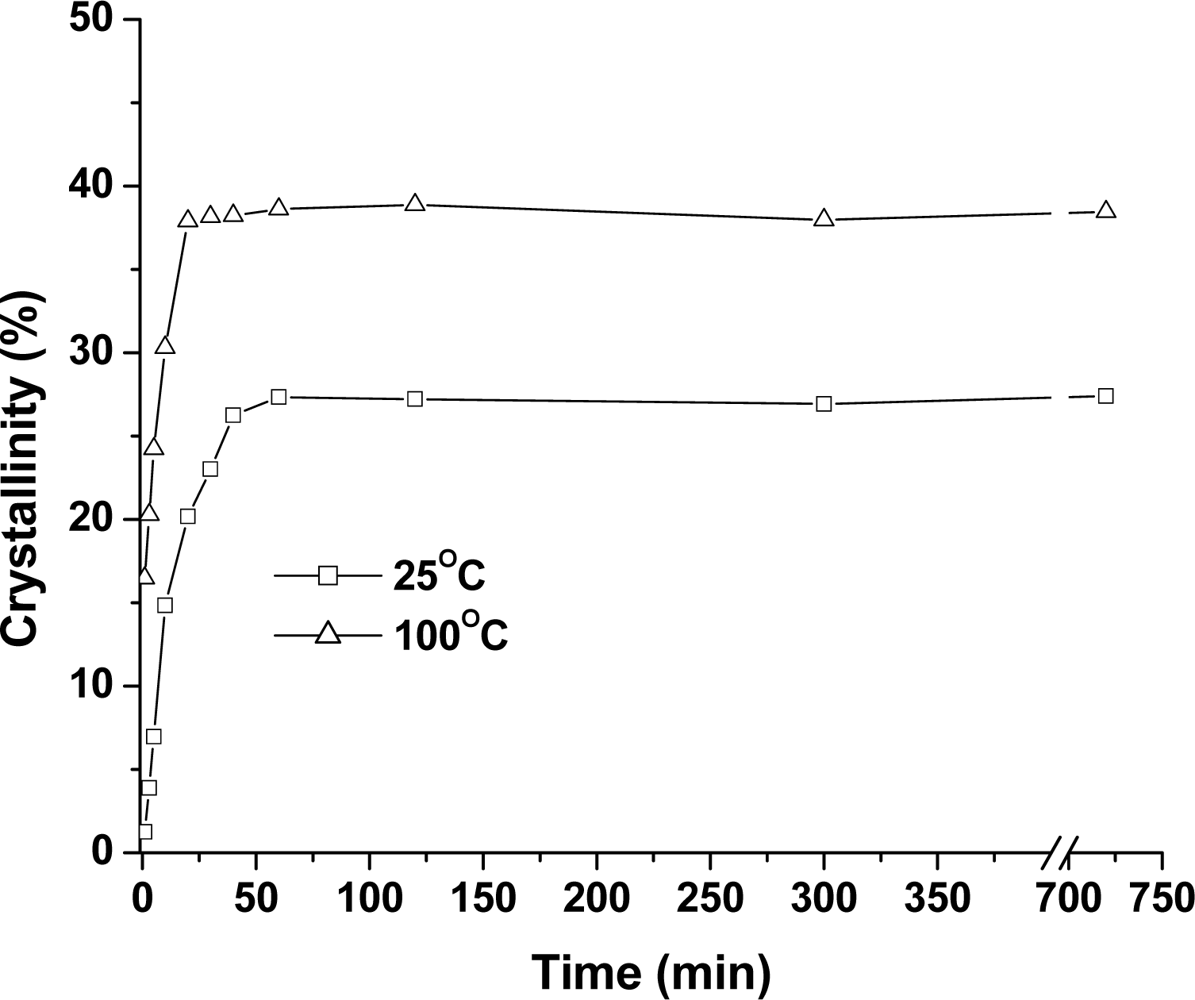 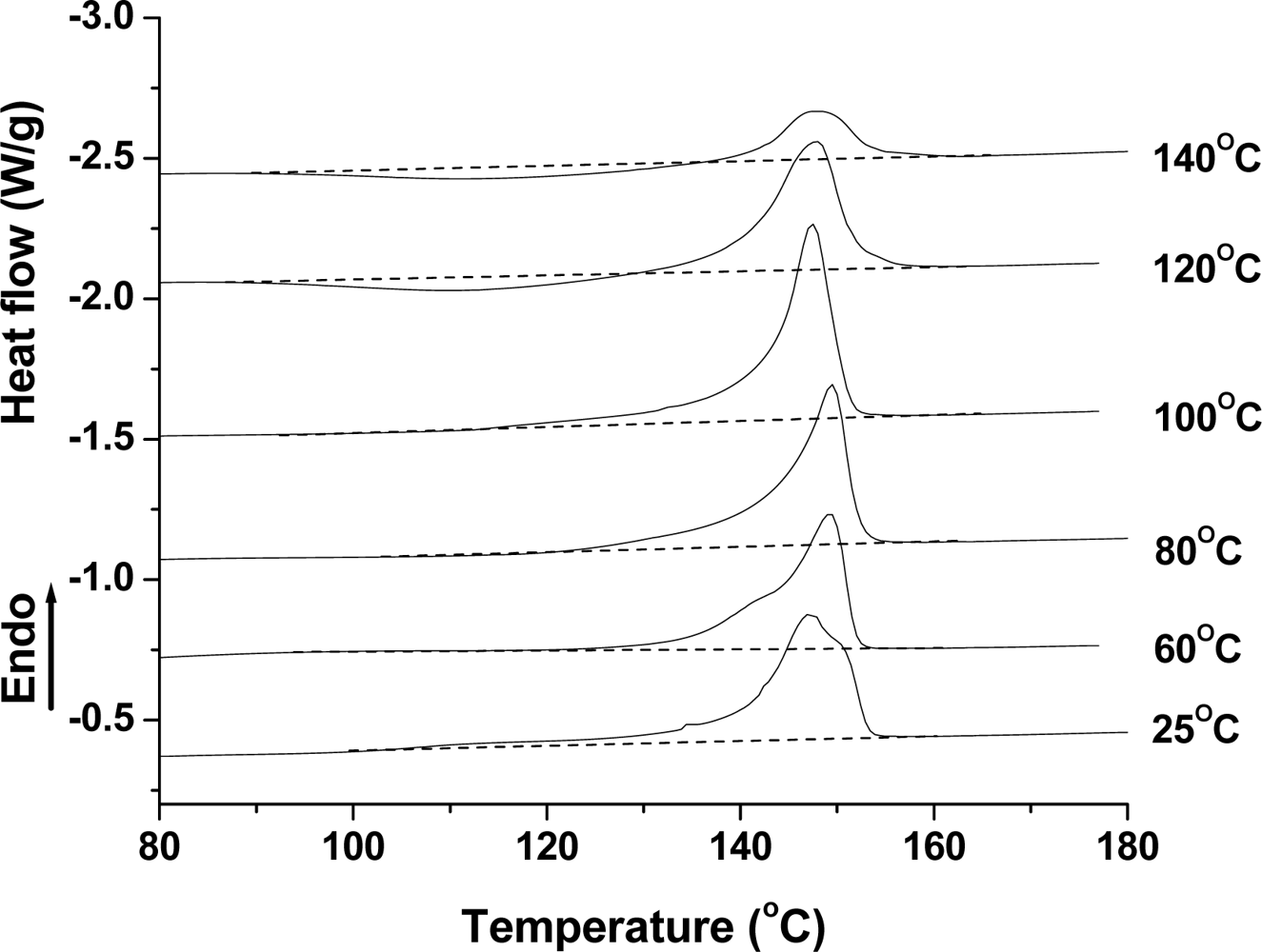 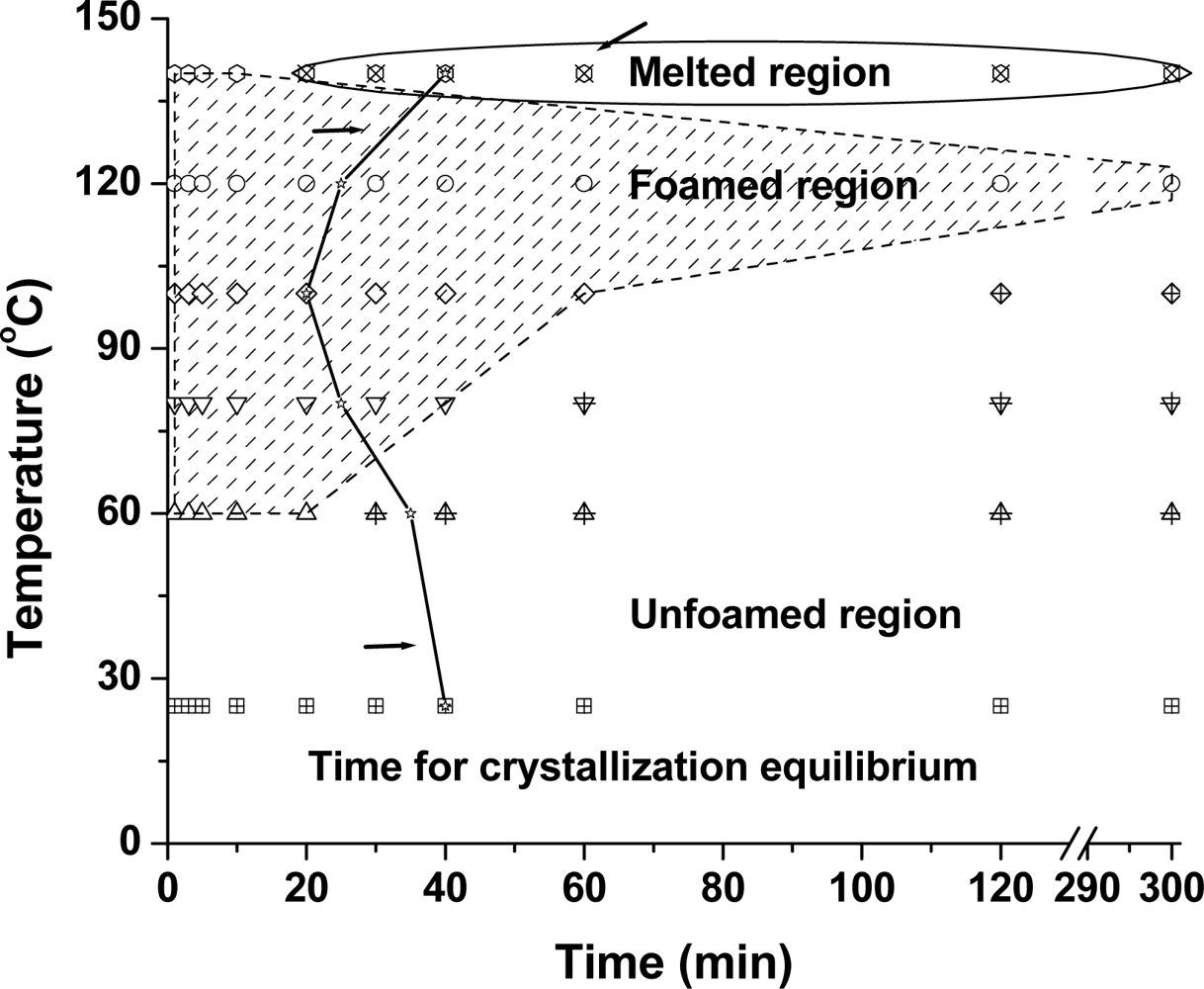 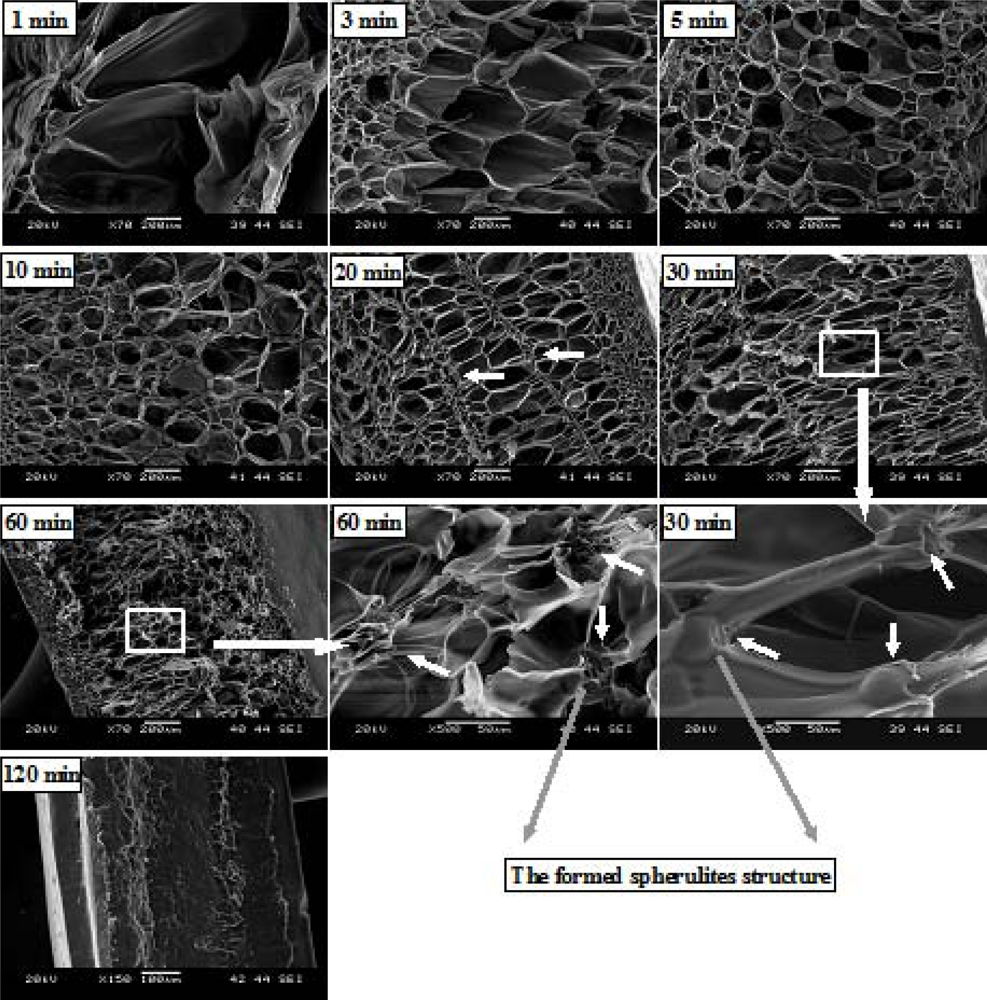 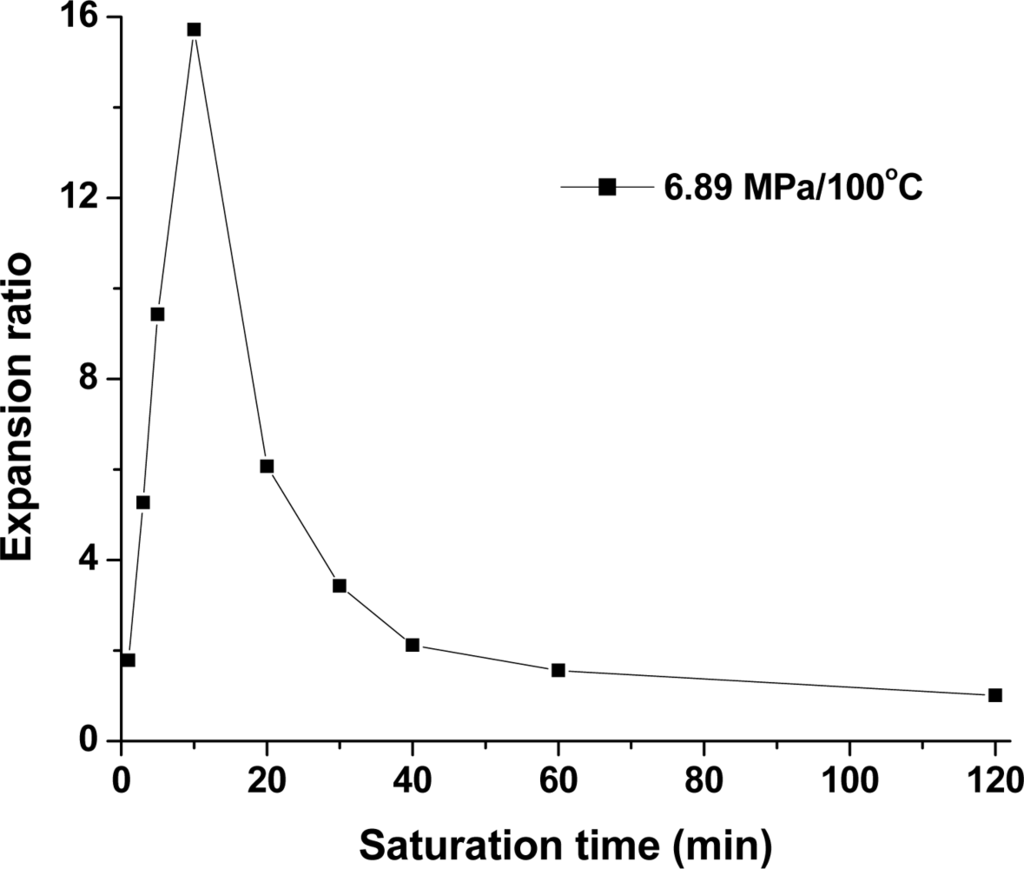 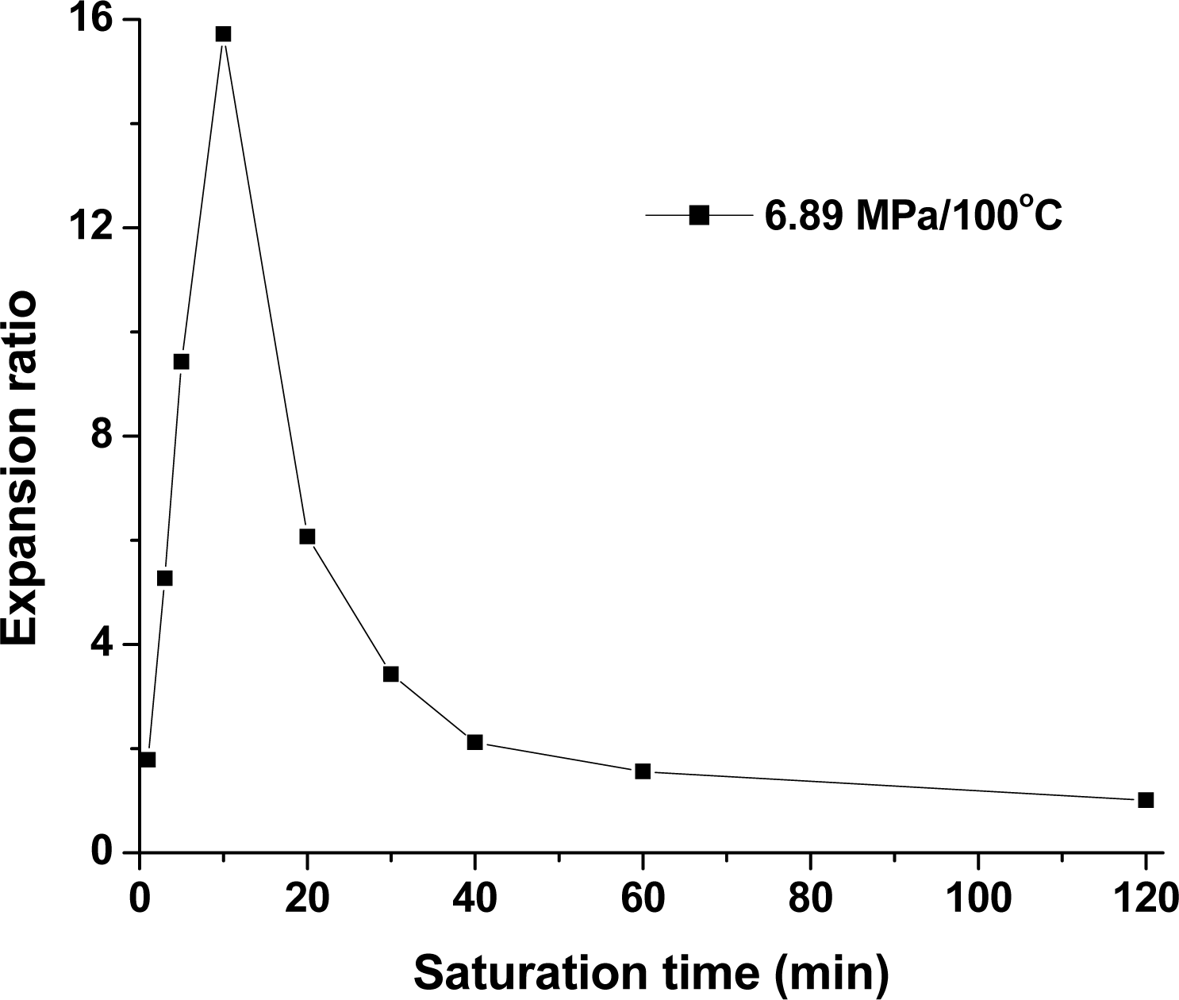