Chalcones as Promising Antitumor Agents by Targeting the p53 Pathway: An Overview and New Insights in Drug-Likeness

Cannabinoids in Breast Cancer: Differential Susceptibility According to Subtype

Although cannabinoids have been used for centuries for diverse pathological conditions, recently, their clinical interest and application have emerged due to their diverse pharmacological properties. Indeed, it is well established that cannabinoids exert important actions on multiple sclerosis, epilepsy and pain relief. Regarding cancer, cannabinoids were first introduced to manage chemotherapy-related side effects, though several studies demonstrated that they could modulate the proliferation and death of different cancer cells, as well as angiogenesis, making them attractive agents for cancer treatment. In relation to breast cancer, it has been suggested that estrogen receptor-negative (ER−) cells are more sensitive to cannabinoids than estrogen receptor-positive (ER+) cells. In fact, most of the studies regarding their effects on breast tumors have been conducted on triple-negative breast cancer (TNBC). Nonetheless, the number of studies on human epidermal growth factor receptor 2-positive (HER2+) and ER+ breast tumors has been rising in recent years. However, besides the optimistic results obtained thus far, there is still a long way to go to fully understand the role of these molecules. This review intends to help clarify the clinical potential of cannabinoids for each breast cancer subtype. View Full-Text
Keywords: cannabinoids; Cannabis sativa; anandamide; Δ9-tetrahydrocannabinol; cannabidiol; cannabigerol; cannabinol; cannabidivarin; breast cancer cannabinoids; Cannabis sativa; anandamide; Δ9-tetrahydrocannabinol; cannabidiol; cannabigerol; cannabinol; cannabidivarin; breast cancer
►▼ Show Figures 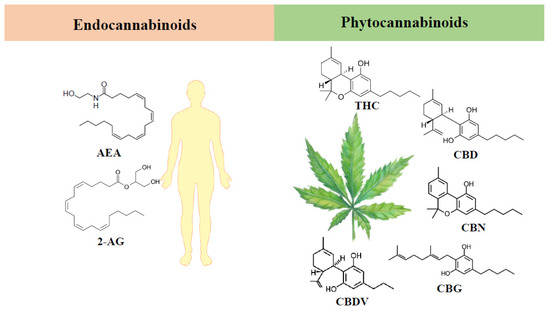