Silybum marianum (L.) Gaertn is a rich source of antioxidants and anti-inflammatory flavonolignans with great potential for use in pharmaceutical and cosmetic products. Its biotechnological production using in vitro culture system has been proposed. Chitosan is a well-known elicitor that strongly affects both secondary metabolites and biomass production by plants. The effect of chitosan on S. marianum cell suspension is not known yet. In the present study, suspension cultures of S. marianum were exploited for their in vitro potential to produce bioactive flavonolignans in the presence of chitosan. Established cell suspension cultures were maintained on the same hormonal media supplemented with 0.5 mg/L BAP (6-benzylaminopurine) and 1.0 mg/L NAA (α-naphthalene acetic acid) under photoperiod 16/8 h (light/dark) and exposed to various treatments of chitosan (ranging from 0.5 to 50.0 mg/L). The highest biomass production was observed for cell suspension treated with 5.0 mg/L chitosan, resulting in 123.3 ± 1.7 g/L fresh weight (FW) and 17.7 ± 0.5 g/L dry weight (DW) productions. All chitosan treatments resulted in an overall increase in the accumulation of total flavonoids (5.0 ± 0.1 mg/g DW for 5.0 mg/L chitosan), total phenolic compounds (11.0 ± 0.2 mg/g DW for 0.5 mg/L chitosan) and silymarin (9.9 ± 0.5 mg/g DW for 0.5 mg/L chitosan). In particular, higher accumulation levels of silybin B (6.3 ± 0.2 mg/g DW), silybin A (1.2 ± 0.1 mg/g DW) and silydianin (1.0 ± 0.0 mg/g DW) were recorded for 0.5 mg/L chitosan. The corresponding extracts displayed enhanced antioxidant and anti-inflammatory capacities: in particular, high ABTS antioxidant activity (741.5 ± 4.4 μM Trolox C equivalent antioxidant capacity) was recorded in extracts obtained in presence of 0.5 mg/L of chitosan, whereas highest inhibitions of cyclooxygenase 2 (COX-2, 30.5 ± 1.3 %), secretory phospholipase A2 (sPLA2, 33.9 ± 1.3 %) and 15-lipoxygenase (15-LOX-2, 31.6 ± 1.2 %) enzymes involved in inflammation process were measured in extracts obtained in the presence of 5.0 mg/L of chitosan. Taken together, these results highlight the high potential of the chitosan elicitation in the S. marianum cell suspension for enhanced production of antioxidant and anti-inflammatory silymarin-rich extracts. View Full-Text
Keywords: antioxidant; anti-inflammatory; chitosan; flavonoids; phenolics; Silybum marianum antioxidant; anti-inflammatory; chitosan; flavonoids; phenolics; Silybum marianum
►▼ Show Figures 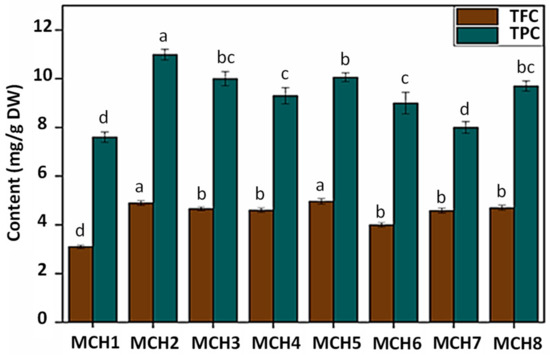