Inclusion of edible insects in human diets is increasingly promoted as a sustainable source of proteins with high nutritional value. While consumer acceptability remains the main challenge to their integration into Western food culture, the use of edible insects as meal and protein concentrate could decrease neophobia. The defatting of edible insects, mostly done with hexane, is the first step in producing protein ingredients. However, its impact on protein profiles and techno-functionality is still unclear. Consequently, this study compares the protein profiles of hexane-defatted and non-hexane-defatted yellow mealworm (Tenebrio molitor) meals and protein extracts, and evaluates the impact of hexane on protein solubility and foaming properties. Results showed that profiles for major proteins were similar between hexane-defatted and non-defatted samples, however some specific content differences (e.g., hexamerin 2) were observed and characterized using proteomic tools. Protein solubility was markedly lower for T. molitor meals compared to protein extracts. A large increase in the foaming capacity was observed for defatted fractions, whereas foam stability decreased similarly in all fractions. Consequently, although the hexane-defatting step was largely studied to produce edible insect protein ingredients, it is necessary to precisely understand its impact on their techno-functional properties for the development of food formulations. View Full-Text
Keywords: Tenebrio molitor; hexane defatting step; protein concentrates; protein profile and identification; protein solubility; foaming capacity Tenebrio molitor; hexane defatting step; protein concentrates; protein profile and identification; protein solubility; foaming capacity
►▼ Show Figures 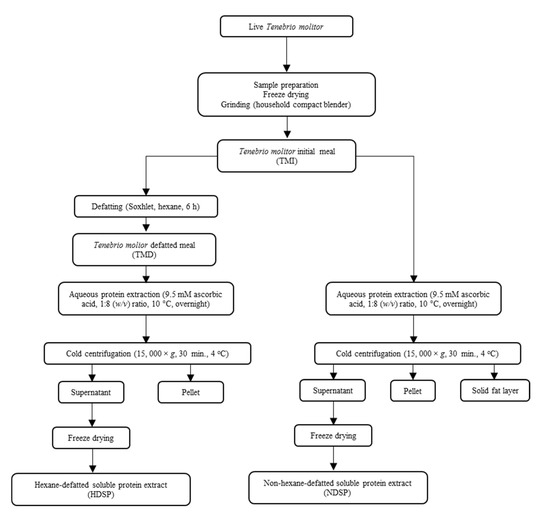