The antibacterial activity and efflux pump reversal of thymol and carvacrol were investigated against the Staphylococcus aureus IS-58 strain in this study, as well as their toxicity against Drosophila melanogaster. The minimum inhibitory concentration (MIC) was determined using the broth microdilution method, while efflux pump inhibition was assessed by reduction of the antibiotic and ethidium bromide (EtBr) MICs. D. melanogaster toxicity was tested using the fumigation method. Both thymol and carvacrol presented antibacterial activities with MICs of 72 and 256 µg/mL, respectively. The association between thymol and tetracycline demonstrated synergism, while the association between carvacrol and tetracycline presented antagonism. The compound and EtBr combinations did not differ from controls. Thymol and carvacrol toxicity against D. melanogaster were evidenced with EC50 values of 17.96 and 16.97 µg/mL, respectively, with 48 h of exposure. In conclusion, the compounds presented promising antibacterial activity against the tested strain, although no efficacy was observed in terms of efflux pump inhibition.
Keywords: bacterial resistance; efflux pumps; terpenoids; thymol; carvacrol bacterial resistance; efflux pumps; terpenoids; thymol; carvacrol

The prevalence of bacterial resistance to antibiotics, this being associated with increased mortality rates, has become a source of great concern for public health [1]. Staphylococcus aureus is a commensal microorganism associated with a wide variety of infections, since it has the capacity to acquire resistance to many classes of antibacterial agents, such as β-lactams, quinolones and macrolides [2,3].
There are several mechanisms by which S. aureus develops resistance to antimicrobials, including limited drug absorption, target modification, enzymatic inactivation and active efflux mechanisms [4]. The latter, also known as efflux pumps, are proteins integrated into the bacterial plasma membrane that reduce the intracellular concentration of antibiotics by extruding them from the cell [5]. Among these pumps, the TetK pump, belonging to the major facilitator superfamily (MFS), is present in S. aureus IS-58 strain. TetK powers its transport activity with energy derived from proton gradients and is responsible for resistance to the tetracycline class of antibiotics [6].
Given the above, the development of efflux pump inhibitors that act as competitive and non-competitive adjuvants to reduce antibiotic resistance has attracted the attention of researchers [7]. Natural bacterial resistance modifiers can facilitate the reintroduction of ineffective therapeutic antibiotics in the clinic, reducing the toxic risks of these drugs by acting as efflux system regulators or as efflux pump inhibitors (EPIs) when blocking their activity [8,9].
The compounds thymol and carvacrol are two phenolic terpenoids, geometric isomers, which can be found in the form of translucent crystals and a yellowish liquid, respectively, at room temperature. Both are obtained from essential oils, mainly from thyme (Thymus vulgaris L.) and oregano (Origanum vulgare L.) [10], where a number of pharmacological properties associated with these compounds have been previously described in the literature, including antifungal [11] and antibacterial activities [12,13]. Although some compounds are capable of acting as EPIs, their high eukaryotic cell toxicity prevents their development as EPIs [14]. Thus, studies assessing the toxicity of these substances are necessary. Drosophila melanogaster is a model organism in toxicological assays which aim to understand the genetic and molecular mechanisms of toxic substances since these are very sensitive to different concentrations of toxic substances [15].
Thus, the objective of this study was to assess the antibacterial activity and efflux pump reversal mechanisms of the isomers thymol and carvacrol against the S. aureus IS-58 bacterial strain and to evaluate their toxicity in a D. melanogaster model.

The monoterpenes thymol and carvacrol demonstrated relevant direct antibacterial activity against the S. aureus IS-58 strain, with MIC values of 72 µg/mL and 256 µg/mL, respectively (Table 1), where the MIC value for thymol was more effective than that of the standard antibiotic tetracycline, with values varying between 128 and 114 µg/mL.

In this work, our results indicated that thymol and carvacrol exert relevant antibacterial activity, with MIC values of 72 and 256 µg/mL respectively, against the S. aureus IS-58 strain. These results are in accordance with that reported by Miladi et al. [16], in which thymol and carvacrol obtained MIC values of 64 and 256 µg/mL, respectively, against the S. aureus ATCC 25923 strain. Lambert et al. [17] also reported a greater antibacterial activity for thymol compared to carvacrol against S. aureus ATCC 6538. These results may be justified by the hydrophobic nature and low solubility of thymol in the hydrophobic domain of the cytoplasmic membrane of bacterial cells. [18].
The structural differences in the hydroxyl group (OH) position in both thymol and carvacrol isomers did not affect the inhibitory effect against the assayed bacterial strain. By the same reason, the relative position of the hydroxyl group in the phenolic ring also failed to strongly influence the degree of antibacterial activity for thymol and carvacrol against Bacillus cereus, S. aureus and Pseudomonas aeruginosa [19]. However, the study by Dorman and Deans [20] reported that carvacrol and thymol act differently against gram-positive and gram-negative species. Our results evidenced an interference in the antibiotic activity when thymol and tetracycline were associated, resulting in a reduction of the MIC value of tetracycline from 114 to 101 µg/mL. However, Davies and Wright [21] stated in their study that when a compound is in association with an inhibitor, only a minimum of a 3-fold MIC reduction is acceptable as significant in terms of inhibiting resistance mechanisms, when carvacrol was associated with tetracycline an antagonism can be observed. These results are different from that observed by Cirino et al. [22], where thymol and carvacrol, used at sub-inhibitory concentrations (MIC/4), reduced the MIC value of tetracycline from 64 μg/mL to 32 μg/mL in both cases.
The TetK efflux pump is the main mechanism for bacterial resistance to tetracycline, being coded by the plasmid gene pt181. The main efflux protein protects the bacterial ribosome by extruding the antibiotic out of the bacterial cell [23]. Many studies have been conducted to face the bacterial resistance to antibiotics, mainly through using compounds that act as adjuvants to the antibiotic activity. For this reason, it is known that natural products and phytochemicals act synergistically with this objective [24,25,26]. In our assays, thymol and carvacrol had no effect as EPIs. Due to the fact that efflux pumps are the unique mechanism for EtBr extrusion, the MIC reduction of the EtBr indicates an EPI effect [27]. Thus, our results indicate that thymol and carvacrol act on other resistance mechanisms, regardless of the active efflux.
Given these results, we also investigated the thymol and carvacrol toxicity against D. melanogaster. Similar findings were also stated by Zhang et al. [28], who demonstrated that oxygenated monoterpenes, such as thymol and carvacrol, exhibited high toxicity against D. melanogaster while investigating the fumigant toxicity of monoterpenes against fruit flies. Negative geotaxis consists of flies’ ability to move vertically, this being a common locomotion behavior associated with D. melanogaster [29]. The results found in this study corroborate data from the investigation by Karpouhtsis et al. [30], which reported an insecticidal and genotoxic activity for thymol against D. melanogaster. Previous studies also report a repellent activity for thymol against Culex pipiens pallens [31], as well as a toxic effect for its larvae [32].
The insecticidal potential of terpenoids has been associated with their low molecular weights, which makes them highly volatile, with these being often considered toxic or repellent against insects, where different functional groups and their locations seem to influence their biological effectiveness [33]. The toxicity mechanisms and locomotor capacity impairments produced by many compounds and/or essential oil may be associated with a decrease in AChE activity, which, considering its importance against neurotoxicity, functions as defense in stressful situations [34,35]. Another factor also reported in the literature is the increase in the biosynthesis of heat shock proteins, such as hsp70, which support the functional structure of important enzymes and proteins, as an insect’s self-defense mechanism against stressors [36].

The IS-58 S. aureus strain (gently furnished by Dr. Simon Gibbons, from the Imperial College, London, UK), with the PT181 plasmid carrying the gene for the tetracycline efflux protein TetK, was used. The culture media used in the tests were heart infusion agar (HIA, laboratories Difco Ltd.a., Campinas, Brazil) prepared according to the manufacturer and 10% brain heart infusion (BHI, laboratories Difco Ltd.a.) broth.

The antibiotic tetracycline, as well as thymol and carvacrol, were diluted in dimethyl sulfoxide (DMSO) and in sterile water to a final concentration of 1024 μg/mL. The DMSO proportion used was lower than 5%. Chlorpromazine and EtBr were dissolved in sterile distilled water, while carbonyl cyanide m-chlorophenylhydrazone (CCCP) was dissolved in methanol/water (1:3, v/v). All substances were diluted until reaching a concentration of 1024 µg/mL. The molecular structures of the compounds were obtained using the software ACD/ChemSketch (ACD/LABS, Toronto, ON, Canada) (Figure 5).

The MIC was determined for the isolated compounds thymol and carvacrol as per the broth microdilution method proposed by Javadpour et al. [37], with some adaptations. The inoculants were prepared 24 h after sowing the strains. Eppendorfs® were filled with 1440 µL of BHI and 160 µL of the inoculum. The plates were then filled with 100 µL of the final solution. Microdilution was performed with 100 µL of the products. Following 24 h of incubation, readings were taken by the addition of resazurin (7-hydroxy-3H-phenoxazine-3-one 10-oxide) [38]. The tests were performed in triplicates.

The fumigation bioassay method proposed by Cunha et al. [40] was used to assess toxicity. Adult flies (males and females), in multiples of 20, were placed in 130 mL flasks, previously prepared with 1 mL of 20% sucrose solution. The compound doses were impregnated in the glass cover on filter paper. The control received 20 µL of acetone, while the compounds were prepared at the concentrations of 200 µg/mL for thymol and 195.2 µg/mL for carvacrol, both diluted in acetone. Volumes of 20, 10 and 5 µL were taken from the stock solutions, resulting in the final concentrations of 31, 15 and 8 µg/mL in bottles with 130 mL of air for thymol and 30, 15 and 7 µg/mL in bottles with 130 mL of air for carvacrol, respectively.
The bioassays were conducted in a BOD-type greenhouse under controlled conditions. The tests were performed in triplicates and mortality rate readings were performed at 3, 6, 12, 24, 36 and 48 h [40].

Damage to the locomotor system was determined as described by Coulom and Birman [41], after considering fly mortality. The negative geotaxis assay consists of counting the number of flies that rise above 3 cm in the experimental glass column during a 5 s time interval. The assays were repeated twice within a 1 min interval. The results were presented as the mean time (s) ± SE obtained from three independent experiments. 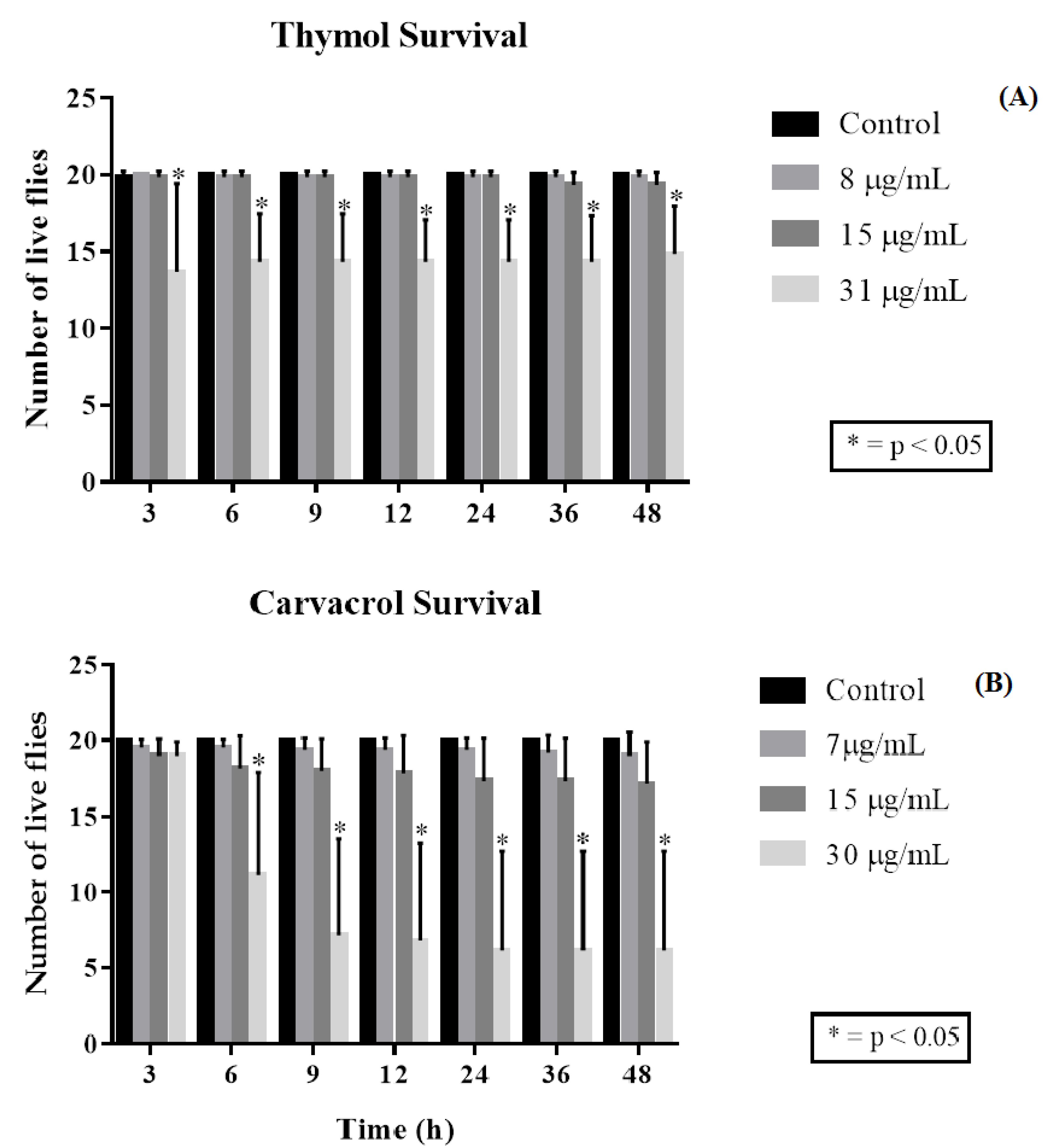 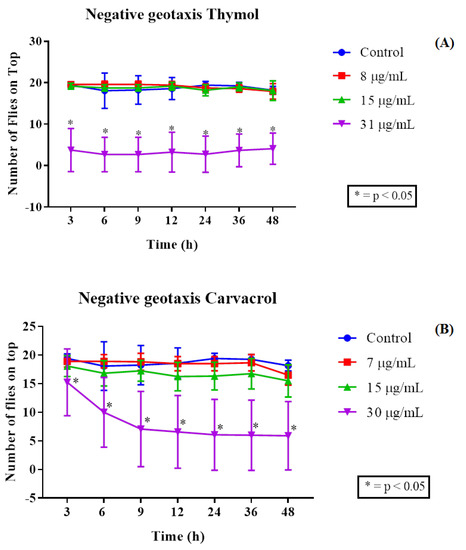