The Influence of Plant Material Enzymatic Hydrolysis and Extraction Conditions on the Polyphenolic Profiles and Antioxidant Activity of Extracts: A Green and Efficient Approach
Next Article in Special Issue

Study of Caspase 8 Inhibition for the Management of Alzheimer’s Disease: A Molecular Docking and Dynamics Simulation
Previous Article in Special Issue

In this work, the novel hybrid nanomaterial SWCNT/SiPc made of single walled carbon nanotubes (SWCNT) cross-linked via axially substituted silicon (IV) phthalocyanine (SiPc) was studied as the active layer of chemiresistive layers for the detection of ammonia and hydrogen. SWCNT/SiPc is the first example of a carbon-based nanomaterial in which an axially substituted phthalocyanine derivative is used as a linker. The prepared hybrid material was characterized by spectroscopic methods, thermogravimetry, scanning and transmission electron microscopies. The layers of the prepared hybrid were tested as sensors toward ammonia and hydrogen by a chemiresistive method at different temperatures and relative humidity as well as in the presence of interfering gases like carbon dioxide, hydrogen sulfide and volatile organic vapors. The hybrid layers exhibited the completely reversible sensor response to both gases at room temperature; the recovery time was 100–200 s for NH3 and 50–120 s in the case of H2 depending on the gas concentrations. At the relative humidity (RH) of 20%, the sensor response was almost the same as that measured at RH 5%, whereas the further increase of RH led to its 2–3 fold decrease. It was demonstrated that the SWCNT/SiPc layers can be successfully used for the detection of both NH3 and H2 in the presence of CO2. On the contrary, H2S was found to be an interfering gas for the NH3 detection. View Full-Text
Keywords: carbon nanotubes; hybrid materials; covalent functionalization; phthalocyanine; gas sensor; chemiresistive sensor carbon nanotubes; hybrid materials; covalent functionalization; phthalocyanine; gas sensor; chemiresistive sensor
►▼ Show Figures 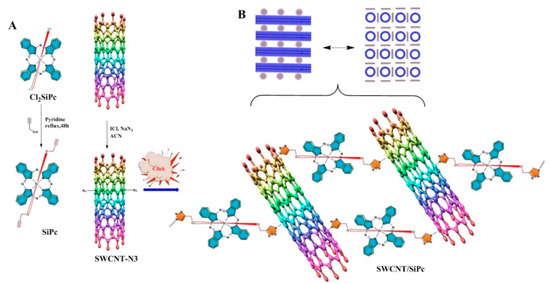