Design, Synthesis, and In Vitro Evaluation of Hydroxybenzimidazole-Donepezil Analogues as Multitarget-Directed Ligands for the Treatment of Alzheimer’s Disease

Alzheimer’s disease is a neurodegenerative condition for which currently there are no drugs that can cure its devastating impact on human brain function. Although there are therapeutics that are being used in contemporary medicine for treatment against Alzheimer’s disease, new and more effective drugs are in great demand. In this work, we proposed three potential drug candidates which may act as multifunctional compounds simultaneously toward AChE, SERT, BACE1 and GSK3β protein targets. These candidates were discovered by using state-of-the-art methods as molecular calculations (molecular docking and molecular dynamics), artificial neural networks and multilinear regression models. These methods were used for virtual screening of the publicly available library containing more than twenty thousand compounds. The experimental testing enabled us to confirm a multitarget drug candidate active at low micromolar concentrations against two targets, e.g., AChE and BACE1. View Full-Text
Keywords: Alzheimer’s disease; molecular docking; molecular dynamics; QSAR; neural networks; CADD; multifunctional drugs Alzheimer’s disease; molecular docking; molecular dynamics; QSAR; neural networks; CADD; multifunctional drugs
►▼ Show Figures 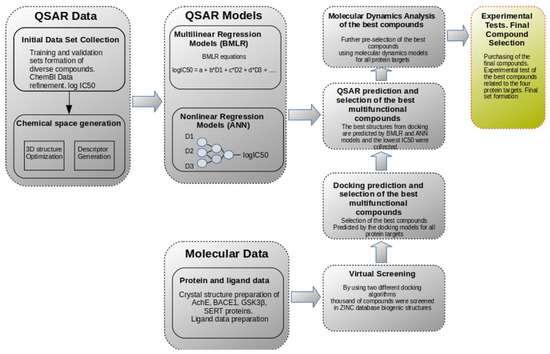