Characterization of the structure and pharmacological activity of Berberis dasystachya Maxim., a traditional Tibetan medicinal and edible fruit, has not yet been reported. In this study, central composite design (CCD) combined with response surface methodology (RSM) was applied to optimize the extraction conditions of B. dasystachya oil (BDSO) using the supercritical carbon dioxide (SC-CO2) extraction method, and the results were compared with those obtained by the petroleum ether extraction (PEE) method. The chemical characteristics of BDSO were analyzed, and its antioxidant activity and in vitro cellular viability were studied by DPPH, ABTS, reducing power assay, and MTT assay. The results showed that the maximum yield of 12.54 ± 0.56 g/100 g was obtained at the optimal extraction conditions, which were: pressure, 25.00 MPa; temperature 59.03 °C; and CO2 flow rate, 2.25 SL/min. The Gas chromatography (GC) analysis results showed that BDSO extracted by the SC-CO2 method had higher contents of unsaturated fatty acids (85.62%) and polyunsaturated fatty acids (57.90%) than that extracted by the PEE method. The gas chromatography used in conjunction with ion mobility spectrometry (GC–IMS) results showed that the main volatile compounds in BDSO were aldehydes and esters. BDSO also exhibited antioxidant ability in a dose-dependent manner. Moreover, normal and cancer cells incubated with BDSO had survival rates of more than 85%, which indicates that BDSO is not cytotoxic. Based on these results, the BDSO extracted by the SC-CO2 method could potentially be used in other applications, e.g., those that involve using berries of B. dasystachya. View Full-Text
Keywords: Berberis dasystachya Maxim.; seed oil; supercritical carbon dioxide; fatty acids; volatile components; antioxidant activity; cytotoxicity Berberis dasystachya Maxim.; seed oil; supercritical carbon dioxide; fatty acids; volatile components; antioxidant activity; cytotoxicity
►▼ Show Figures 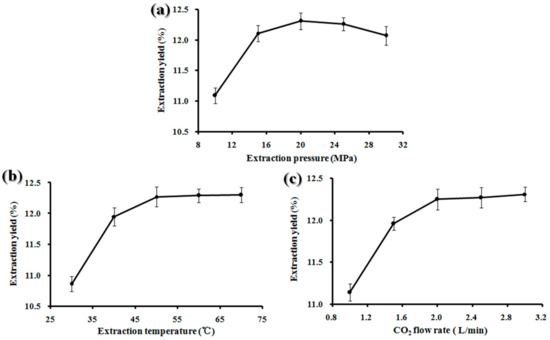