The Role of Brassica Bioactives on Human Health: Are We Studying It the Right Way?

Brassica vegetables and their components, the glucosinolates, have been suggested as good candidates as dietary coadjutants to improve health in non-communicable diseases (NCDs). Different preclinical and clinical studies have been performed in the last decade; however, some concerns have been posed on the lack of established and standardized protocols. The different concentration of bioactive compounds used, time of intervention or sample size, and the lack of blinding are some factors that may influence the studies’ outcomes. This review aims to analyze the critical points of the studies performed with Brassica-related biomolecules and propose some bases for future trials in order to avoid biases.
Keywords: Brassica; clinical trials; glucosinolates Brassica; clinical trials; glucosinolates

In the present work we pursued the objective of critically reviewing the clinical studies in which ingredients and bioactive compounds from cruciferous vegetables (Brassicaceae family) had been used with different pathologies. Based on the anti-cancer properties attributed to GSLs and isothiocyanates (ITCs), we opted to search according to these pathologies since they were the most studied in the past decades. Additionally, one of the main target pathways of the SFN in the organism is the Nrf2–Keap1–ARE system [13,14,15], with a wide role in the development and progression of chronic diseases (e.g., cancers, respiratory problems), and, finally, based on their anti-inflammatory characteristics we opted also to review the more recent research data on the effects of the consumption of GSLs in the development and management of metabolic diseases, mediated by systemic inflammatory conditions. Diverse bibliographical searches were carried out in databases including PubMed, Scopus, and SpringerLink using the following terms and keywords: cancer, metabolic disease, respiratory tract disease, sulforaphane, and glucosinolates. In order to make a more concise selection, the results were limited to clinical trials. From the obtained records, articles including cruciferous foods and derived products were the selected items, and we reduced the timeframe to the last years, from 2012 to the present as well. This selection gave us 53 articles of studies developed with human subjects, with granted access to the full text of the given publication, and contributed with clinical data of the compounds and the pathologies present in the studies. The articles based on in vitro or in vivo (animal models) experiments or trials were not considered because we focused our work on the data of studies carried out with human adults with different pathologies, to back the decision-making when looking for nutritional recommendations in the daily clinical practice with such patients. Nor were articles using low-caloric diets, low-fat diets, or Mediterranean-type diets considered, because these are healthy options for the human subjects in any intervention study, and they did not provide us with specific information about consumption of cruciferous foods or ingredients derived from Brassicaceae products. Additionally, articles where the isothiocyanates (ITCs) were used as biomarkers in intra-hospitalar tumor resections or documents based on healthy volunteers were also not included in the analysis, because they were patients with pathologies unrelated to our objective of study, and therefore, 36 articles were discarded.
According to all these selected criteria, 15 clinical studies were selected to carry out this critical study of clinical evidence using bioactives from Brassica and also one cohort study because of its ample sample size and long period of follow-up of 22 years [35]. We also carried out the analysis of a “letter to editor” [38] that was submitted as a response to this cohort study.

3. The Clinical Evidences of Health-Promotion with Brassica Bioactives from a Critical Point of View

The analysis of the articles of medium-length duration between 2 and 8 months (Table S2) indicated that three were dedicated to studies on cancer in different localizations, two studies were on prostate cancer, and one study was on breast cancer.
In both studies of Alumkal et al. [45] and Cipolla et al. [46], the main factor studied was the change in the PSA (prostate specific antigen) parameter. In their study, Alumkal et al. ambitiously established the objective of a reduction of 50% in the level of PSA after 20 weeks of intervention, an objective that was not achieved. The obtained reductions were significant and in the range of 3% to 20%. In both studies it was also positive to find an increased time for doubling the amount of PSA after the intervention was found (pre- and post-intervention in placebo from 6.1 to 16.6 months [45]; 9.6 to 31.9 months, in the treated group).
Cipolla et al. [46] were focused in the changes in PSA over time, which were not significant when adjusting the data to the months (m0, m1, m3, and m6); but, when eliminating the m1, the reduction was of 0.0180 ng/mL/month. Besides, the median of log PSA was 38.5% lower in the intervention group than in the placebo, and the progression of the PSA was by 71.8% in the placebo versus the 44.4% in the SFN-treated group. Looking into the changes of the phase II enzymes, the GSTM1, and the inhibition of the HDAC in the work of Alumkal et al. [45], non-significant differences were found. In both studies, the time for the intervention was similar, namely 20 and 24 weeks, respectively, but the amount of SFN was much higher in the work of Cipolla et al. [46], and that probably favored the better more encouraging final results in this study. In any case, Atwell et al. [47] planned to evaluate the efficacy of the consumption of the broccoli sprouts extract to modify the activity of the HDAC (histone deacetylase) and the breast tumor marker CA (carcinogenic antigen) in order to improve the diagnosis in women with benign disease and non-invasive CA. They proposed an intervention using six pills with a theoretical content of SFN of 30 mg in three administrations per day. A point in favor of this article is that they carried out an internal analysis of the composition of the capsules, and determined the total daily dosage of 224 mg of SFN instead of the declared 180 mg of SFN as designated by the supplier of the supplement. When evaluating the results, the levels of the HDAC before and after administration between groups were not statistically different. Only when comparing the two groups, treated and untreated, after the intervention was a significant difference observed, with a reduction in the HDAC in the group with the treatment. It should be noted that the authors also carried out a stratified data analysis considering the consumption of NSAIDs, using this variable as independent, and they found a significant reduction in the HDAC in the patients that were non-regular consumers of NSAIDs (p = 0.04), and it was not possible to find significant differences in the group of consumers of NSAIDs. Additionally, the biomarkers H3K18ac, H3K9ac, HDAC3, HDAC6, Ki-67, and P21 did not present statistically significant differences in the pre- or post-analysis. When comparing the levels of pre- and post-treatment within each group, a significant reduction was found in Ki-67 and HDAC3 in benign tissues in the SFN treated group, and a significant reduction of H3K9ac in the tissular DCIS in the placebo group. As a conclusion of this work, the authors did not plan as a hypothesis that the NSAIDs inhibited the synthesis of prostaglandins, and this could suppress the expression of regulator proteins through the involvement of the recruitment of the HDAC. The increased recruitment of the HDAC in the chromatin could prevent the inhibition associated with the consumption of SFN, and that could be a potential explanation for the observed data, and for the future studies using interventions with SFN, longer studies will be required to confirm these findings.

P.G.-I., D.V. and D.A.M., devised the project, the main conceptual ideas, and the proof outline. S.Q.-M., P.G.-I., F.Q.-M. and D.V. wrote the first draft of the manuscript. All authors revised and approved the final versions of the submitted manuscripts. All authors have read and agreed to the published version of the manuscript.

The authors would like to thank also the comprehensive and positive critics of the reviewers that helped us to improve the submitted manuscript. 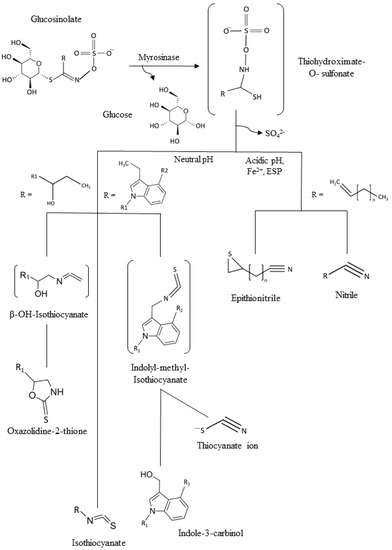