Leishmaniasis affects around 12 million people worldwide and is estimated to cause the ninth-largest disease burden. There are three main forms of the disease, visceral (VL), cutaneous (CL), and mucocutaneous (MCL), leading to more than one million new cases every year and several thousand deaths. Current treatments based on chemically synthesized molecules are far from ideal. In this study, we have tested the in vitro and in vivo efficacy of ursolic acid (UA), a multifunctional triterpenoid with well-known antitumoral, antioxidant, and antimicrobial effects on different Leishmania strains. The in vitro antileishmanial activity against the intracellular forms was six and three-fold higher compared to extracellular forms of L. amazonensis and L. infantum, respectively. UA also showed to be a potent antileishmanial drug against both VL and CL manifestations of the disease in experimental models. UA parenterally administered at 5 mg/kg for seven days significantly reduced the parasite burden in liver and spleen not only in murine acute infection but also in a chronic-infection model against L. infantum. In addition, UA ointment (0.2%) topically administered for four weeks diminished (50%) lesion size progression in a chronic infection model of CL caused by L. amazonensis, which was much greater than the effect of UA formulated as an O/W emulsion. UA played a key role in the immunological response modulating the Th1 response. The exposure of Leishmania-infected macrophages to UA led to a significant different production in the cytokine levels depending on the Leishmania strain causing the infection. In conclusion, UA can be a promising therapy against both CL and VL. View Full-Text
Keywords: ursolic acid; visceral leishmaniasis; acute-infection; chronic-infection; cutaneous leishmaniasis; cytokines ursolic acid; visceral leishmaniasis; acute-infection; chronic-infection; cutaneous leishmaniasis; cytokines
►▼ Show Figures 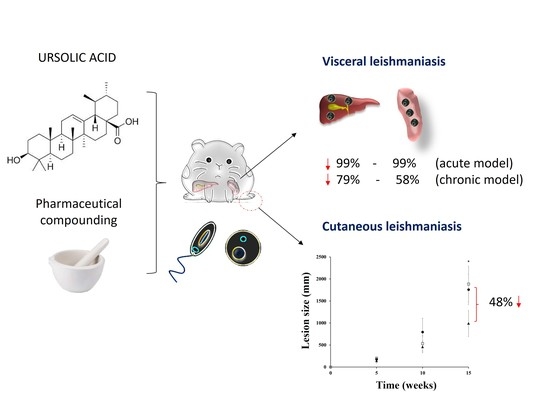