Amyloidogenic Peptides in Human Neuro-Degenerative Diseases and in Microorganisms: A Sorrow Shared Is a Sorrow Halved?
Next Article in Special Issue

Structure-Based Design, Synthesis and Bioactivity of a New Anti-TNFα Cyclopeptide

As opposed to small molecules, macrocyclic peptides possess a large surface area and are recognised as promising candidates to selectively treat diseases by disrupting specific protein–protein interactions (PPIs). Due to the difficulty in predicting cyclopeptide conformations in solution, the de novo design of bioactive cyclopeptides remains significantly challenging. In this study, we used the combination of conformational analyses and molecular docking studies to design a new cyclopeptide inhibitor of the interaction between the human tumour necrosis factor alpha (TNFα) and its receptor TNFR-1. This interaction is a key in mediating the inflammatory response to tissue injury and infection in humans, and it is also an important causative factor of rheumatoid arthritis, psoriasis and inflammatory bowel disease. The solution state NMR structure of the cyclopeptide was determined, which helped to deduce its mode of interaction with TNFα. TNFα sensor cells were used to evaluate the biological activity of the peptide.
Keywords: cyclic peptides; NMR structure; drug design; protein–protein interaction cyclic peptides; NMR structure; drug design; protein–protein interaction

Tumour necrosis factor alpha (TNFα) is a pleiotropic inflammatory cytokine produced and secreted mainly by macrophages, which can also be produced by many other cells, for instance, CD4+ lymphocytes, neutrophils, NK cells and mast cells [1]. TNFα plays an important role in the pathogenesis of many chronic inflammatory diseases and its inhibition has been shown to be an effective approach for therapy of rheumatoid arthritis, psoriatic arthritis, ankylosing spondylitis, psoriasis and inflammatory bowel disease [2]. The systemic inflammatory effects of TNFα are caused by its soluble form, which exists as a homo-trimeric complex of 17-kDa subunits. It binds to two different receptors: TNF Receptor-1 (TNFR-1), also known as [p55 (CD120a)], and TNF Receptor-2 (TNFR-2) [or p75 (CD120b)], to which TNFα binds with relatively higher affinity compared to TNFR-1 [3].
Binding of either TNFR-1 or 2 to their ligand induces the receptor’s trimerisation. Both receptors bind TNFα, with TNFR-1 being constitutively expressed in all cells, while TNFR-2 is inducibly regulated mainly in haematopoietic and endothelial cells [4,5]. The TNFα-mediated clustering of TNFR-1 initiates the signalling of pathways that lead to both apoptosis (through the caspase cascade) and cell activation (through NF-ĸB) [6]. The NF-ĸB activation pathway following TNFα binding also induces pro-inflammatory cytokines like IL-4 and IL-8, responsible for the extensive tissue damage seen in many chronic inflammatory diseases [7].
Small linear peptides (8–10 amino acids) are not appropriate as mimetics of the defined secondary structures found in proteins, due to their intrinsic conformational flexibility. By contrast, the structural rigidity of cyclic peptides makes them good mimetics of the protein conformational epitopes that lead to interactions with proteins and ligands [8]. A common strategy to rigidify peptide structures is by cyclisation, which could be via disulphide bridge formation or amide bond formation between N- and C- termini. N- to C- cyclisation has the advantage that it usually leads to fewer rotatable bonds when compared to disulphide bridge formation. Therefore, N- to C- cyclisation usually results in more rigid and less flexible conformers [9].
A range of biologics targeting TNFα have been licensed for the treatment of various inflammatory diseases, such as rheumatoid arthritis and Crohn’s disease [10]. Although these agents have high potency and specificity, they are limited by their high production costs and potential immunogenicity. For instance, large molecule biologics like infliximab have been associated with development of infusion reaction (antigenicity) despite their high selectivity for TNFα [11]. Also, their large molecular weight and low oral stability means their administration is only feasible through injection [12]. Several small molecule synthetic inhibitors of TNFα are at different stages of pre-clinical and clinical development. Thalidomide was the first to be developed and it inhibits TNFα production by promoting TNFα mRNA degradation in stimulated monocytes [13]. This was followed by the discovery of other classes of inhibitors targeting p38 MAP kinase, which controls TNFα production, TNFα converting enzyme (TACE), and the mRNA coding for TNFα. The majority of these agents exhibited toxicities related to their ability to cross the blood-brain barrier or by inhibition of liver cytochrome P450 enzyme [14]. Generally, the molecular size and lipophilicity of peptides determines their ability to cross the physical and enzymatic barriers of the brain [15]. Peptide cyclisation as a means of overcoming these two different types of barriers has only been successful with small opioid cyclopeptides (tetramers) possessing a β-turn [16].
Small molecule with anti-TNFα activity with compact 3D conformations containing trifluoromethylphenyl indole and chromone moieties have previously been designed. These compounds bind with high affinity (IC50 = 13 μM) to a hydrophobic binding pocket formed by six tyrosine residues (Y59, Y119 and Y151 from chain A and B) at the interface of TNFα dimer [17]. Alternative binding pockets that bind small molecules have also been identified from the predicted TNFα-TNFR1 complex and these involve the residues H66, L67 and L71 of TNFR1 and residues R82, F90 and F127 in TNFα [18]. Recently, a small molecule benzimidazole derivative (UCB-6876) has been discovered, a co-crystal structure of UCB-6876 with TNFα resulted in a change in the spatial arrangement of the TNFα trimer and a loss of its 3-fold symmetry. This compound was also found to occupy the centre of the TNFα trimer filling a hydrophobic binding pocket involving chain A (Y59), chain B (L57, Y119) and chain C (Y59, Y151) [19].

Fmoc amino acid derivatives, coupling reagents (HBTU, HATU and HOBt), preloaded chlorotrityl resin (H-Gly 2-ClTrt), sym-collidine, trifluoroacetic acid (TFA), dichloromethane (DCM) and acetonitrile (HPLC grade) were purchased from Merck (Feltham, UK). N,N-dimethylformamide (DMF), piperidine, 1,1,1,3,3,3-Hexafluoro-2-propanol (HFIP), N,N-diisopropylethylamine (DIEA) and triisopropylsilane (TIS) were supplied by Alfa Aesar (Lancashire, UK).
A conformational search for thermally accessible structures of 1 was done using the Tinker molecular modelling package [31]. A set of initial cyclic peptide structures for use in the following protein-ligand docking studies was generated by Tinker’s monte Monte-Carlo program using the AMBER99 force field. 5000 steps of Cartesian moves and maximum atom displacement of 3 Å (default) was used. The temperature was set to 500 K and a maximum RMS gradient for truncated Newton minimisation of 0.01 (default) used. Final potential energies for each optimised conformation was then calculated in kcal/mol using Tinker’s analyze executable. The Boltzmann distribution of conformational ensemble obtained in this way was determined by calculating the Boltzmann factor for each structure by the following equation: where BF is the Boltzmann factor, E is the total potential energy in kJ/mol, R is the gas constant (8.314 J/K/mol), and T is the temperature in kelvin. The ratios of Boltzmann factors for all selected conformations relative to the highest energy conformation were then calculated. Structural comparison by molecular overlay (all atoms) for the resulting conformations was carried out by determining root mean square deviations (RMSDs) in Angstroms for each structure with reference to the lowest energy conformation. This was done in Discovery Studio Visualizer and all conformations of 1 were docked to TNFα using AutoDock Vina.
Side chain-protected linear peptide sequence of 1 was synthesised manually using solid phase peptide synthesis strategy (SPPS). H-Gly 2-ClTrt resin (loading of 1.1 mmol/g and 0.3 g) was first swelled in DMF for 20 min, and the construction of the peptide sequence was done through cycles of Fmoc deprotection of attached amino acids and HBTU coupling of the next amino acid in the sequence. Fmoc deprotection was carried out using 20% piperidine while coupling was done by mixing molar ratio of amino acid:HBTU:HOBt:DIEA:preloaded resin of 3:3:3:6:1 rotated for 1 h at room temperature. Reaction progress was monitored by LC-MS. Completed linear peptide sequence was cleaved from the solid support with 20% HFIP in DCM, dried under vacuum and used for cyclisation reactions. Macrocyclisation of synthesised linear peptide was carried in DMF under dilution condition (0.1 mM) using 1.5 equivalents of HATU, HOBt and sym-collidine slowly added to vigorously stirred peptide solution at room temperature for 24 h. Crude reaction product was then dried and deprotected using a mixture of 95% TFA, 2.5% TIS and 2.5% water [32]. Product obtained was then purified by reverse-phase HPLC with 5% to 100% gradient of acetonitrile/water on C-18 column (ACE, HiChrom, 250 mm × 10 mm i.d) followed by lyophilisation. Purified cyclic peptide was then analysed by HPLC, LC-MS and 2D NMR experiments.
Three-dimensional NMR structure of 1 was calculated in methanol-d3 solution using NOE-restrained molecular dynamics. The experimental NOE restraint values were directly used in calculation rather than distances. Here we used NOE restraints calculated from NOESY cross-peak volume with reference to known distances in the molecule. Cross-peak volumes were calculated using MestReNova software and NOE restraints by the following equation: where, rij and αij are distance and peak volume demanded respectively, and rref and αref represent distance and peak volume of reference, respectively. The structure calculations were carried out using XPLOR-NIH by first generating random structures of the cyclic peptide. Then, simulated annealing was performed by heating the molecules to 3500 K and slowly cooled down to 100 K through 60,000 cooling steps. During simulated annealing, the NOE restraints were used to drive the conformational ensemble of cyclic peptides. The trans configuration of residue P9 was also taken into consideration during the calculations. This was determined by a low 13C chemical shift difference of 4.27 ppm between Cβ and Cγ [30].
TNFα sensor cells (HEK-Blue) were grown in Dulbecco’s Modified Eagle’s medium (DMEM) containing 4.5 g/L glucose and supplemented with 10% [v/v] heat-inactivated foetal bovine serum, 2 mM L-glutamine, 100 μg/mL normocin, 50 U/mL penicillin and 50 μg/mL streptomycin. Selective antibiotics added to the culture medium include 100 μg/mL zeocin and 1 μg/mL puromycin and avoided in initial cultures (first 2 passages). Maintenance cultures were kept in T-75 cell culture flasks and incubated in humidified incubator with 5% [v/v] CO2 at 37 °C. HEK-Blue cultures reaching 70%–80% confluency were passaged by first washing and detaching the cells gently with Dulbecco’s phosphate buffered saline. Cells were then pelleted by centrifugation at 1200 rpm for 5 min. Supernatant was discarded and cell pellets resuspended in fresh media and used in different assays.
The Vybrant®® MTT assay (Thermo Fisher Scientific) was performed following the manufacturer protocol. In this assay, cell permeable tetrazolium dye (yellow) was oxidised by mitochondrial oxidases in viable cells to yield the water-insoluble formazan (purple) after incubation with HEK-TNFα cells. Formazan was then solubilised and quantified by measuring the UV absorbance at 540 nm.

The rational design strategy used in this study led to the discovery of a new moderate inhibitor of TNFα-TNFR-1 interaction. This cyclic peptide will be used at starting point for the development of more effective. The modelling steps, as well as the study of NMR solution structure, helped in suggesting a mode of action for 1 by correlating the structural similarity between 1 and the WP9 loop in TNFR-1. The N- to C- macrocyclic structure of 1 may be expected to confer better chemical stability and bioactivity compared to the disulphide bridged peptidomimetic (WP9QY).

The following are available online, containing data for molecular modelling, LC-MS and NMR analyses and further details about of TNFα sensor cells.

The authors would like to thank the Aberdeen Proteomics Facility and the Aberdeen School of Natural and Computing Sciences MS and NMR Facility for LC-MS and NMR analysis. We also want to acknowledge Prof. Robert Barker and Charlotte Lennon for providing access to their biological testing facility. 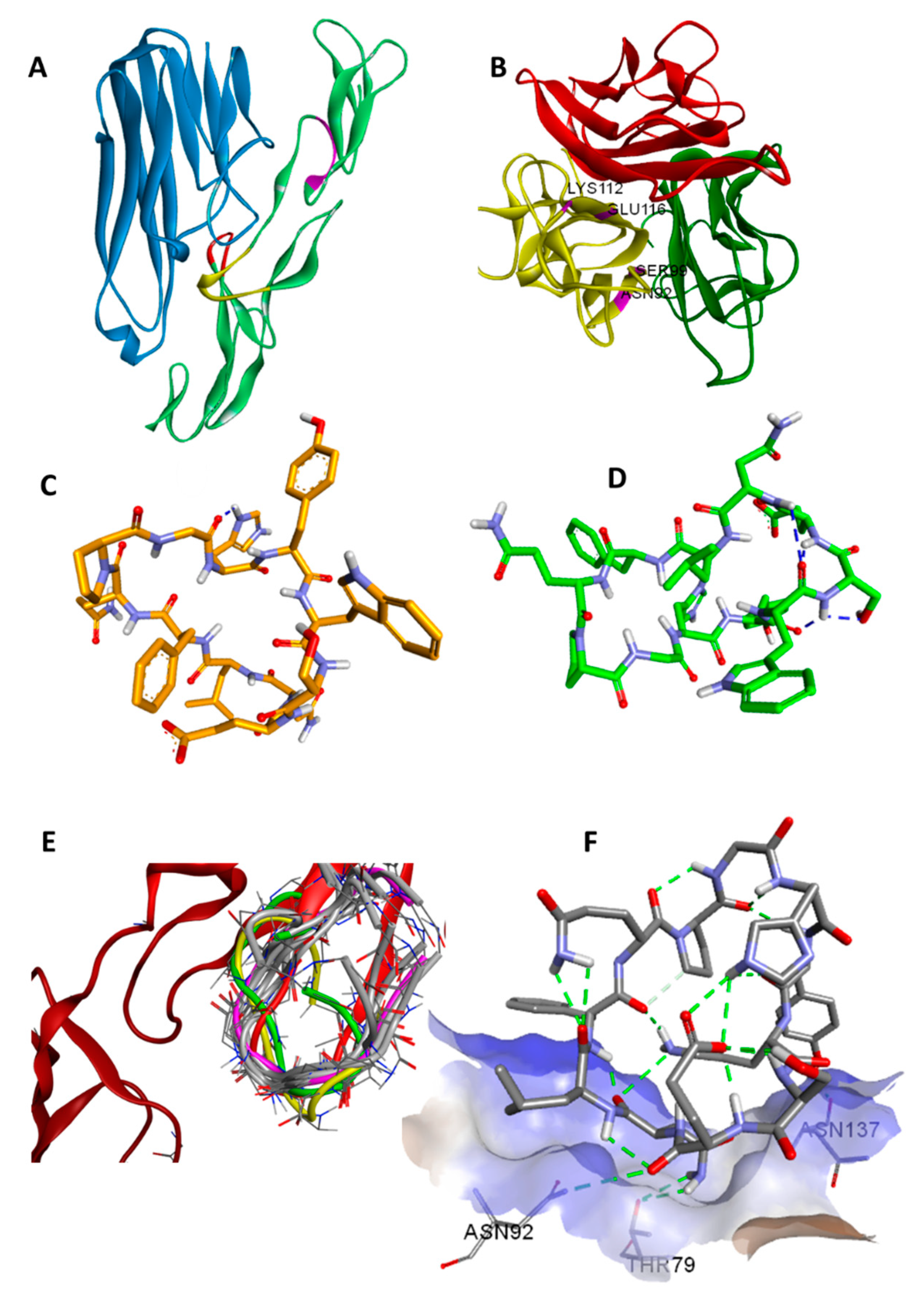 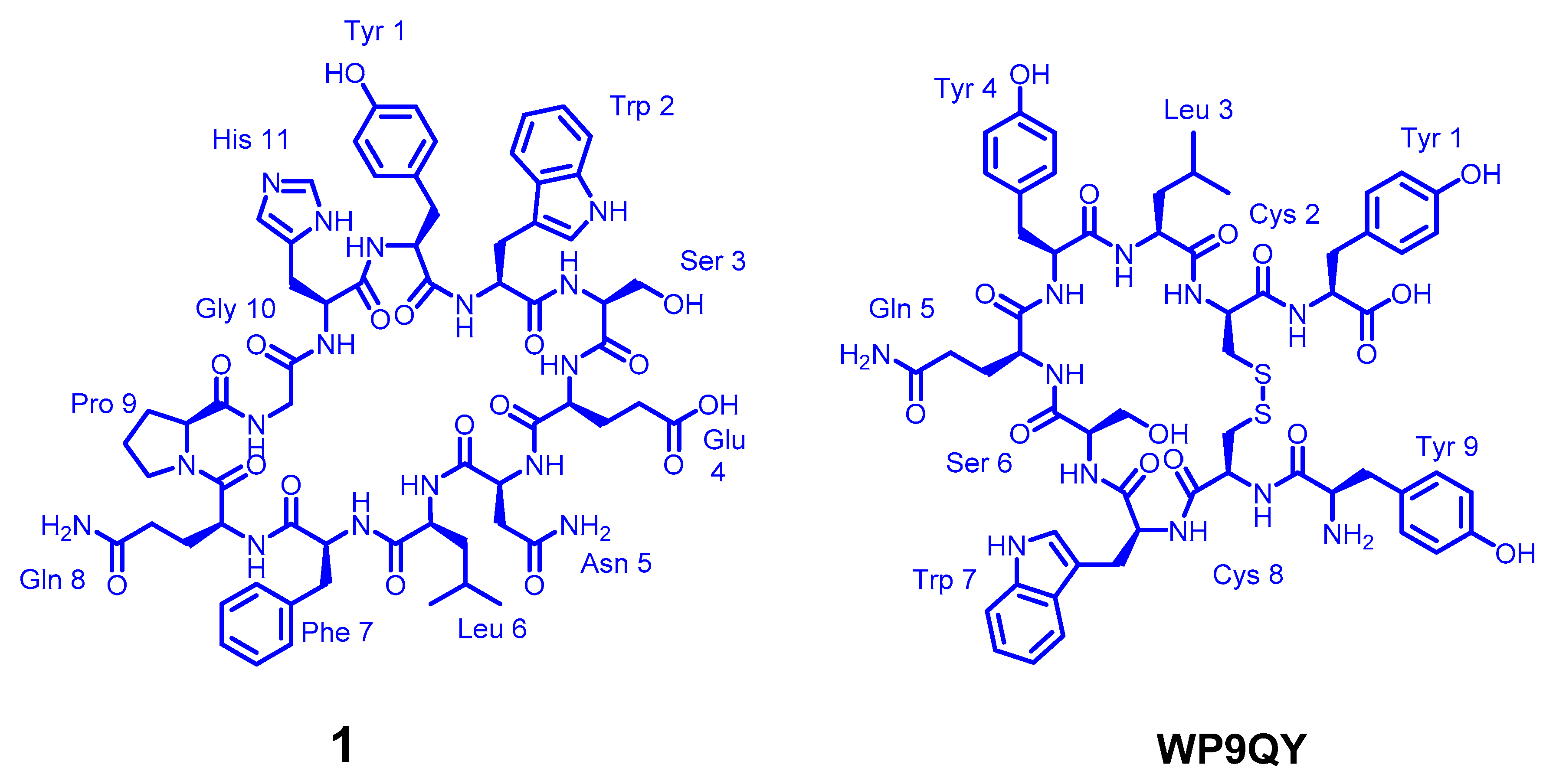