Digital PCR as an Emerging Tool for Monitoring of Microbial Biodegradation

Biodegradation is one of the most effective and profitable methods for the elimination of toxic polychlorinated biphenyls (PCBs) and total petroleum hydrocarbons (TPH) from the environment. In this study, aerobic degradation of the mentioned pollutants by bacterial strains Mycolicibacterium frederiksbergense IN53, Rhodococcus erythropolis IN129, and Rhodococcus sp. IN306 and mixed culture M1 developed based on those strains at 1:1:1 ratio was analyzed. The effectiveness of individual strains and of the mixed culture was assessed based on carried out respirometric tests and chromatographic analyses. The Rhodococcus sp. IN306 turned out most effective in terms of 18 PCB congeners biodegradation (54.4%). The biodegradation index was decreasing with an increasing number of chlorine atoms in a molecule. Instead, the Mycolicobacterium frederiksbergense IN53 was the best TPH degrader (37.2%). In a sterile soil, contaminated with PCBs and TPH, the highest biodegradation effectiveness was obtained using inoculation with mixed culture M1, which allowed to reduce both the PCBs (51.8%) and TPH (34.6%) content. The PCBs and TPH biodegradation capacity of the defined mixed culture M1 was verified ex-situ with prism method in a non-sterile soil polluted with aged petroleum hydrocarbons (TPH) and spent transformer oil (PCBs). After inoculation with mixed culture M1, the PCBs were reduced during 6 months by 84.5% and TPH by 70.8% as well as soil toxicity was decreased. View Full-Text
Keywords: bacteria; polychlorinated biphenyls (PCBs); inoculation; biodegradation; total petroleum hydrocarbons (TPH); toxicological tests bacteria; polychlorinated biphenyls (PCBs); inoculation; biodegradation; total petroleum hydrocarbons (TPH); toxicological tests
►▼ Show Figures 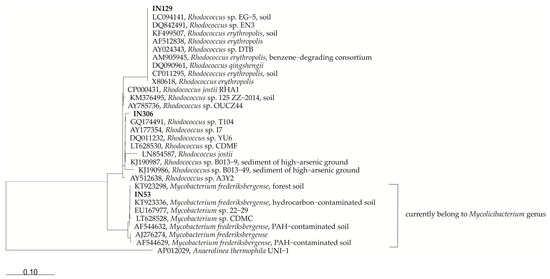