:
The design of more efficient photosensitizers is a matter of great importance in the field of cancer treatment by means of photodynamic therapy. One of the main processes involved in the activation of apoptosis in cancer cells is the oxidative stress on DNA once a photosensitizer is excited by light. As a consequence, it is very relevant to investigate in detail the binding modes of the chromophore with DNA, and the nature of the electronically excited states that participate in the induction of DNA damage, for example, charge-transfer states. In this work, we investigate the electronic structure of the anthraquinone photosensitizer intercalated into a double-stranded poly(dG-dC) decamer model of DNA. First, the different geometric configurations are analyzed by means of classical molecular dynamics simulations. Then, the excited states for the most relevant poses of anthraquinone inside the binding pocket are computed by an electrostatic-embedding quantum mechanics/molecular mechanics approach, where anthraquinone and one of the nearby guanine residues are described quantum mechanically to take into account intermolecular charge-transfer states. The excited states are characterized as monomer, exciton, excimer, and charge-transfer states based on the analysis of the transition density matrix, and each of these contributions to the total density of states and absorption spectrum is discussed in terms of the stacking interactions. These results are relevant as they represent the footing for future studies on the reactivity of anthraquinone derivatives with DNA and give insights on possible geometrical configurations that potentially favor the oxidative stress of DNA.
Keywords:
photodynamic therapy; charge transfer; electronically excited states; anthraquinone; DNA; molecular dynamics; TD-DFT; transition-density analysis

The poly(dG-dC) decamer structure was constructed using the Nucleic Acid Builder (NAB) utility of the Amber18 [66] software. The poly(dG-dC) polynucleotide consisted of a double strand having a 10-base guanine–cytosine sequence in each strand. AQ was non-covalently bound to the polynucleotide model by manually positioning it between the fifth and sixth guanine–cytosine base pairs (G5-C16 and C6-G15 in Figure 1a) of the poly(dG-dC) sequence, to emulate the intercalative binding mode of AQ with DNA. The tleap module of AmberTools19 [66] was used to solvate the AQ-DNA system with a periodic truncated octahedral water solvation box considering a maximum distance of 10 Å from any solute atom to the faces of the box, and a suitable number of Na+ ions was introduced to neutralize the phosphate moieties. The polynucleotide was classically described with the OL15 force field [67], whereas the bonding and the Lennard-Jones nonbonding parameters of AQ were taken from the general AMBER force field for organic molecules [68]. Water molecules were described by the TIP3P [69] solvation model and Na+ ions by suitable AMBER parameters [70]. The geometry of AQ was optimized at the MP2/6-31G* level of theory using the Gaussian16 [71] software, and restrained electrostatic potential charges (RESP) for AQ were calculated at the HF/6-31G* level of theory using the same software. We performed classical MD simulations using the GPU accelerated pmemd software [72] of the Amber18 package. The entire system was at first minimized for 5000 steps using the steepest descent algorithm, followed by 5000 steps using the conjugate gradient algorithm. Afterwards, the system was gradually heated for 50 ps at constant volume (NVT ensemble), using a timestep of 2 fs, to the temperature of 300 K. During the heating process, positional restraints were used for both AQ and poly(dG-dC), by applying a force constant of 10 kcal/(mol Å2), while harmonic restraints having the same force constant were applied on the base pairs at the top and at the bottom of the polynucleotide structure (that is, on the G1-C20 and the C10-G11 base pairs) to conserve the double helix structure. This harmonic potential used an equilibrium distance of 10.5 Å between the centers of mass of the base-pairing nucleotides. After the heating, the entire system was equilibrated at constant pressure (NPT ensemble) by three consecutive 2 ns MD simulations, on which the positional restraints (but not the harmonic restraints on the G1-C20 and the C10-G11 base pairs) were gradually removed to 10, 5, and 0 kcal/(mol Å2). Afterwards, a long 200 ns production simulation was performed in the NPT ensemble using Langevin thermostat to keep the temperature constant; the SHAKE [73] algorithm was used along the entire protocol to maintain fixed the bonds involving hydrogen atoms. From the resulting 200 ns trajectory, a snapshot was taken from each one of the two symmetric and from each one of the two rotated configurations identified from the distribution of the twist angle (formed between the long axis of AQ and the axis of the G15-C6 base pair) along the entire trajectory. These four snapshots were used as starting geometries for a 200 ns MD production each, so that, overall, 1000 ns of classical MD simulation were obtained. From the resulting 1000 ns trajectories we sampled 100 geometries from each of the intervals (0,30), (30,60), (120,150), and (150,180) degrees of the twist angle, using the Metropolis Monte Carlo algorithm so that the sampled geometries reproduced the Boltzmann-distributed twist angles along the 1000 ns MD trajectories. For each of these 400 selected geometries an electrostatic embedding hybrid QM/MM calculation was performed using the Amber18 interface with the Gaussian16 software, in which the QM region comprised the AQ molecule plus the G15 guanine nucleobase. In addition, for the 100 geometries of the symmetric 2 configuration, additional calculations were performed for two different models: The QM region electrostatically embedded in the DNA strand and the QM region in vacuum. For the QM calculation, the first 10 singlet excited states were computed at the TD-DFT level with the CAM-B3LYP [74] long-range corrected functional and Dunning’s cc-pVTZ [75] basis set. The CAM-B3LYP functional was used since it has provided an excellent agreement with the experimental absorption spectra of many organic photosensitizers while providing a proper description of the charge-transfer states involved [76,77]. The characterization of the monomer, excimer, Frenkel exciton and charge-transfer states was performed by using the TheoDORE program suite [60,62].

Anthraquinone derivatives are known to participate in PDT mechanisms through the interaction with DNA strands by, mainly, an intercalative binding mode. After absorption of UV light, the PS is involved in DNA oxidative damage, where electron transfer from guanine nucleobases to the excited PS occurs. Therefore, an efficient photoinduced DNA damage pathway requires the existence of charge-transfer states energetically accessible. In this work, the electronically excited states at the Franck-Condon region of AQ intercalated into a solvated double-stranded d(GCGCGCGCGC) decamer was investigated by means of a combination of classical MD simulations, QM/MM excited-state calculations and one-electron transition-density matrix analysis.
Classical MD simulations evolved for 1 μs showed that the chromophore can adopt four different stable poses inside the intercalative pocket of DNA: two symmetric configurations, where the stacking interactions between AQ and the flanking nucleobases are strong, and two rotated configurations, where the stacking interactions are partially broken. The density of states and the absorption spectrum of the AQ-DNA solvated complex for the four different geometric configurations were computed by means of an electrostatic-embedding QM/MM scheme, where the chromophore and one of the flanking guanine residues were described by TD-DFT in the QM region. For each of the geometric configurations, 100 geometries were considered in the computation of the 10 lowest singlet excited states to take into the account the vibrational sampling of the system. Moreover, the analysis of one-electron transition densities allowed the characterization of the excited states as monomer, Frenkel exciton, excimer and charge-transfer states. The density of states is mainly dominated by monomer-like states located on AQ and charge-transfer states, where an electron is transferred from guanine to the chromophore. Moreover, the charge-transfer states are more relevant for the symmetric configurations, where orbital overlap between AQ and guanine is expected to be more important, than for the rotated configurations. Excimer states are also relatively important in the density of states band, and Frenkel excitons are virtually negligible since they represent less than 5% of the signal. The contribution of charge-transfer states is drastically reduced, while the contribution of the other electronic-state classes increases, when the absorption spectrum is computed, a fact that indicates that the AQ/guanine charge-transfer states are mainly dark.
In conclusion, the binding of AQ to DNA induces the formation of charge-transfer excited states between the PS and guanine. We have shown that these states are energetically accessible at the Franck-Condon region in the singlet manifold. It is very likely that those states are also available in the triplet manifold after intersystem crossing, from where the DNA oxidative damage is initiated. However, further simulations are needed to investigate the efficiency of intersystem crossing when the chromophore is interacting with DNA, and of the charge-transfer process once the system is in the triplet manifold. In addition, theoretical modeling would also be beneficial to rationally functionalize the AQ scaffold and obtain new PSs with improved photophysical properties. The excited-state electronic structure of these functionalized anthraquinone derivatives could be compared with the present calculations for AQ to evaluate whether the functionalization of AQ has led to a modification of the electronic-state features, e.g., the charge-transfer character, that could enhance DNA damage.

Conceptualization, supervision, resources and project administration J.J.N.; calculations and analyses, G.C.; writing—original draft preparation and writing—review and editing, G.C. and J.J.N. All authors have read and agreed to the published version of the manuscript.

This research was funded by Comunidad de Madrid through the Attraction of Talent Program 2018, grant number 2018-T1/BMD-10261. 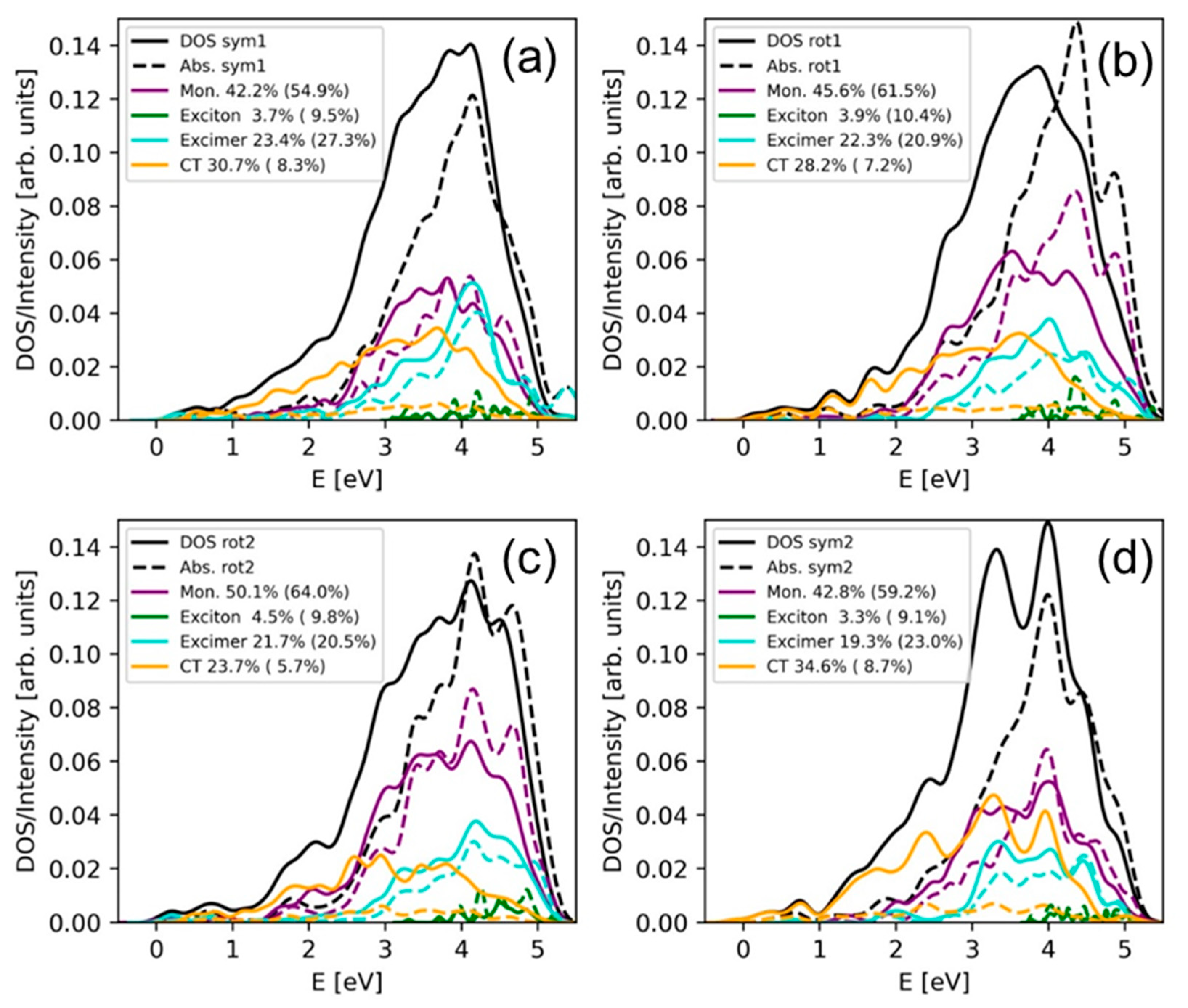 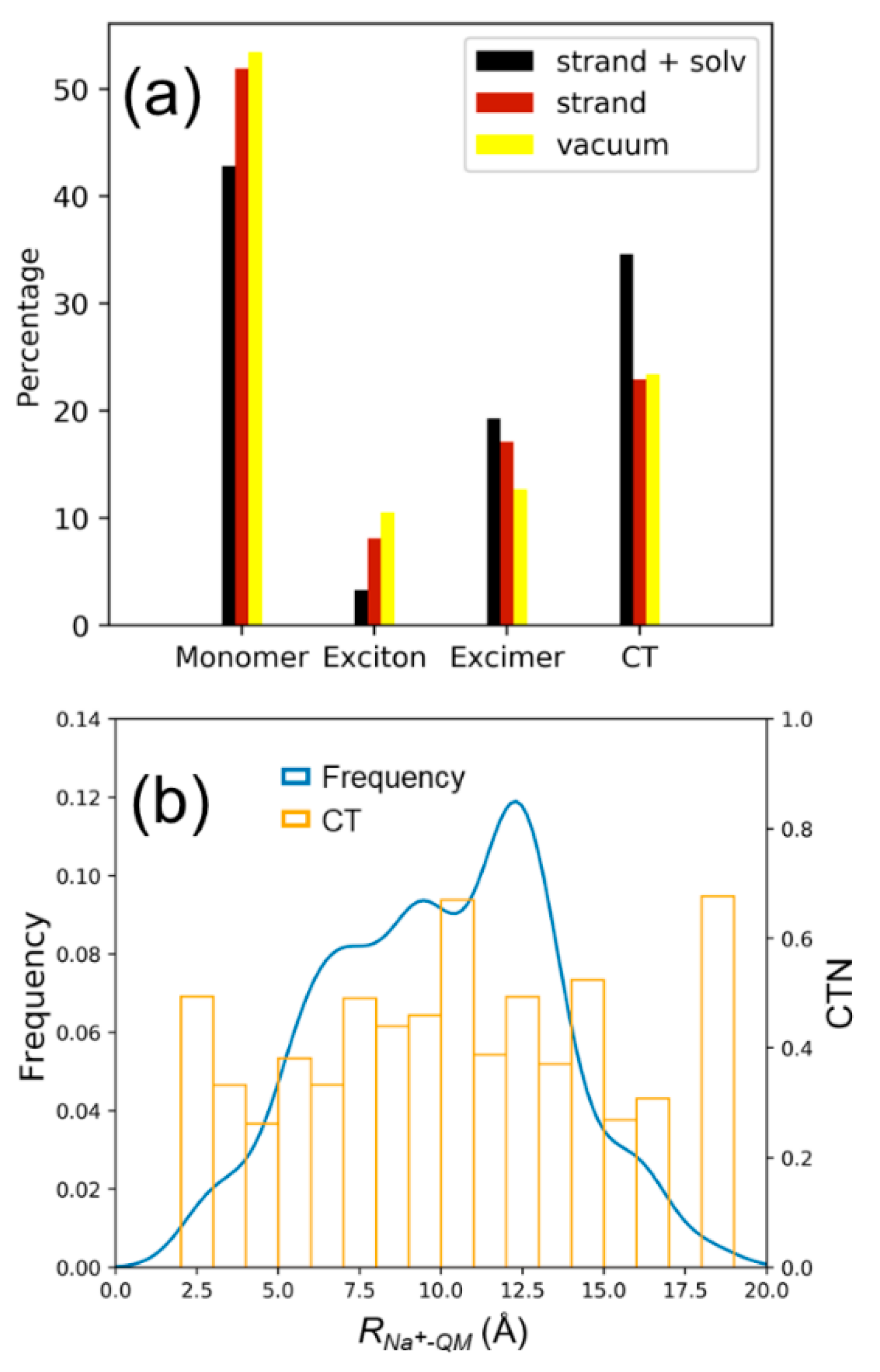