Lactoferrin and Its Derived Peptides: An Alternative for Combating Virulence Mechanisms Developed by Pathogens
Previous Article in Journal

Selective Oxidation of Ethane to Acetic Acid Catalyzed by a C-Scorpionate Iron(II) Complex: A Homogeneous vs. Heterogeneous Comparison
Previous Article in Special Issue

There is an urgent need to develop new antibiotics against multidrug-resistant bacteria. Many antimicrobial peptides (AMPs) are active against such bacteria and often act by destabilizing membranes, a mechanism that can also be used to permeabilize bacteria to other antibiotics, resulting in synergistic effects. We recently showed that G3KL, an AMP with a multibranched dendritic topology of the peptide chain, permeabilizes the inner and outer membranes of Gram-negative bacteria including multidrug-resistant strains, leading to efficient bacterial killing. Here, we show that permeabilization of the outer and inner membranes of Pseudomonas aeruginosa by G3KL, initially detected using the DNA-binding fluorogenic dye propidium iodide (PI), also leads to a synergistic effect between G3KL and PI in this bacterium. We also identify a synergistic effect between G3KL and six different antibiotics against the Gram-negative Klebsiella pneumoniae, against which G3KL is inactive. View Full-Text
Keywords: antimicrobial peptides; dendrimers; membrane permeabilization; antibiotics; synergy antimicrobial peptides; dendrimers; membrane permeabilization; antibiotics; synergy
►▼ Show Figures 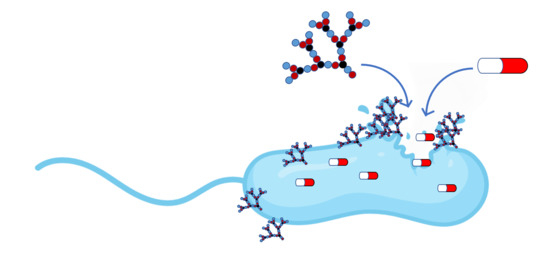