Adult neurogenesis is modulated by many Gi-coupled receptors but the precise mechanism remains elusive. A key step for maintaining the population of neural stem cells in the adult is asymmetric cell division (ACD), a process which entails the formation of two evolutionarily conserved protein complexes that establish the cell polarity and spindle orientation. Since ACD is extremely difficult to monitor in stratified tissues such as the vertebrate brain, we employed human neural progenitor cell lines to examine the regulation of the polarity and spindle orientation complexes during neuronal differentiation. Several components of the spindle orientation complex, but not those of the polarity complex, were upregulated upon differentiation of ENStem-A and ReNcell VM neural progenitor cells. Increased expression of nuclear mitotic apparatus (NuMA), Gαi subunit, and activators of G protein signaling (AGS3 and LGN) coincided with the appearance of a neuronal marker (β-III tubulin) and the concomitant loss of neural progenitor cell markers (nestin and Sox-2). Co-immunoprecipitation assays demonstrated that both Gαi3 and NuMA were associated with AGS3 in differentiated ENStem-A cells. Interestingly, AGS3 appeared to preferentially interact with Gαi3 in ENStem-A cells, and this specificity for Gαi3 was recapitulated in co-immunoprecipitation experiments using HEK293 cells transiently overexpressing GST-tagged AGS3 and different Gαi subunits. Moreover, the binding of Gαi3 to AGS3 was suppressed by GTPγS and pertussis toxin. Disruption of AGS3/Gαi3 interaction by pertussis toxin indicates that AGS3 may recognize the same site on the Gα subunit as G protein-coupled receptors. Regulatory mechanisms controlling the formation of spindle orientation complex may provide novel means to manipulate ACD which in turn may have an impact on neurogenesis. View Full-Text
Keywords: AGS3; G protein; LGN; neurogenesis; NuMA; Ric-8A AGS3; G protein; LGN; neurogenesis; NuMA; Ric-8A
►▼ Show Figures 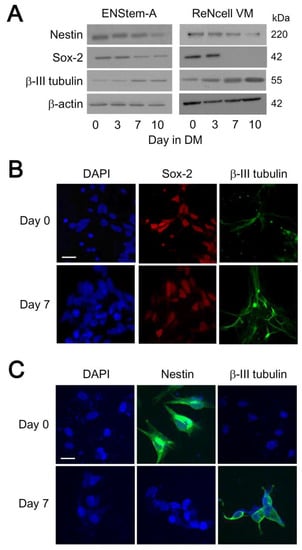