On a Magical Mystery Tour with 8-Bromo-Cyclic ADP-Ribose: From All-or-None Block to Nanojunctions and the Cell-Wide Web

Topoisomerases in the type IA subfamily can catalyze change in topology for both DNA and RNA substrates. A type IA topoisomerase may have been present in a last universal common ancestor (LUCA) with an RNA genome. Type IA topoisomerases have since evolved to catalyze the resolution of topological barriers encountered by genomes that require the passing of nucleic acid strand(s) through a break on a single DNA or RNA strand. Here, based on available structural and biochemical data, we discuss how a type IA topoisomerase may recognize and bind single-stranded DNA or RNA to initiate its required catalytic function. Active site residues assist in the nucleophilic attack of a phosphodiester bond between two nucleotides to form a covalent intermediate with a 5′-phosphotyrosine linkage to the cleaved nucleic acid. A divalent ion interaction helps to position the 3′-hydroxyl group at the precise location required for the cleaved phosphodiester bond to be rejoined following the passage of another nucleic acid strand through the break. In addition to type IA topoisomerase structures observed by X-ray crystallography, we now have evidence from biophysical studies for the dynamic conformations that are required for type IA topoisomerases to catalyze the change in the topology of the nucleic acid substrates.
Keywords: topoisomerase; type IA; DNA supercoiling; RNA topology; decatenation topoisomerase; type IA; DNA supercoiling; RNA topology; decatenation

Topoisomerases are classified into two major types, type I and type II topoisomerases, based on their ability to cleave one or both DNA strands, respectively, during the catalytic process. According to structural homologies and reaction mechanisms, type II topoisomerases can be subdivided into two subgroups: type IIA (including gyrase and topoisomerase IV found in prokaryotes; topoisomerase IIα and topoisomerase IIβ in humans) and type IIB (topoisomerase VI and VIII found in archaea and bacteria) [39,40,41]. Type I topoisomerases can be divided into type IA and type IB, IC subgroups [41]. Type IA topoisomerases, ubiquitous in bacteria, archaea and eukarya [41], can relax negatively supercoiled DNA but not positive supercoils because of the requirement of single-stranded DNA for binding [42]. Type IA topoisomerase introduces a transient cleavage of the single DNA strand and forms a covalent linkage to the 5′-terminal phosphate of the cleaved DNA, followed by the passing of an intact strand (T-strand) of DNA through the DNA break in the cleaved G-strand and the subsequent religation of the nicked G-strand of DNA. This process is referred to as the enzyme-bridged or enzyme-gated mechanism [21,43,44]. Type IB and type IC topoisomerases form a covalent linkage to the 3′-terminal phosphate during catalysis that involves a 360° rotation of the cleaved free end of DNA around the intact strand to relax both positive and negative supercoils with the controlled swivel or controlled rotation mechanism [4,45,46]. Type IC differs from type IB or any other known topoisomerase in sequence or structure, with a unique fold in its N-terminal domain [47].

3. N-Terminal Type IA Core Domains—Binding and Positioning of the G-strand for Cleavage at the Active Site

4. Mechanism of the G-strand Cleavage and Religation

6. Opening and Closing of the G-strand Gate for Strand Passage

In the enzyme-bridged mechanism [21], the two ends of the cleaved G-strand in the covalent intermediate formed by type IA topoisomerases need to be separated by a significant distance through an extensive conformational change of the covalent complex to create the opening at the gate for strand passage. Significant conformational changes of bacterial topoisomerase I have been detected by bulk fluorescence measurements [107,108]. Trapped ion mobility spectrometry–mass spectrometry (TIMS–MS) also demonstrated microheterogeneity of E. coli topoisomerase I conformational states [109]. The extent of gate opening was measured experimentally for E. coli topoisomerase I and topoisomerase III in single-molecule assays [110]. The distance between the cleaved ends of single-stranded DNA bound covalently to the topoisomerases was found to increase by as much as 6 nm. Such a distance was estimated by molecular dynamics simulation to be required for the passage of a double-stranded DNA through the break for a catenation/decatenation reaction involving double-stranded circular DNA with a nick or single-stranded gap [110]. A significant opening of the G-strand gate would also be needed for the passage of a single strand of DNA through the break to catalyze the relaxation of negatively supercoiled DNA.
According to the model for type IA topoisomerase catalysis proposed when the crystal structure of the core domains first showed [44] a toroid enclosed by interactions of D3 with D1 and D4, D3 must move away from D1 and D4 for gate opening. Following the entry of DNA into the interior of the toroid hole, D3 needs to be brought back by a conformational change to close the G-strand gate and religate the break in the G-strand (Figure 5). Opening of the toroid hole also needs to occur at the end of the catalytic cycle for the release of DNA from the interior.
A decatenation loop present in E. coli topoisomerase III but not topoisomerase I has been proposed to keep the gate open to assist the catalysis of decatenation [111]. In contrast, the rapid closing of the DNA gate formed by E. coli topoisomerase I observed in the single-molecule assays would allow a fast rate of relaxation of negatively supercoiled DNA [110]. The hinge region between domains D2 and D4 could play an important role in the gate opening and closing. Combined techniques of magnetic tweezers and total internal reflection fluorescence microscopy also detected E. coli topoisomerase I conformational change that is necessary for strand passage, but an alternative model of sliding the domains past each other to create a gate for capturing the T-strand of DNA into the interior of the toroid was proposed [112].

The mechanism of the G-strand gate opening and T-strand transport by type IA topoisomerases remains to be fully elucidated. Communication between the N-terminal core domains and the C-terminal domains bound to the T-strand may be required for coordinating the opening and closing of the G-gate with strand passage. The guiding of the T-strand in and out of the toroid hole is also not well understood. Direct evidence and characterization of additional transient intermediates that are part of the proposed catalytic cycle would further our understanding of the mechanism at the molecular level.
The recent discovery of the RNA topoisomerase activity for type IA topoisomerases expanded the scope of potential cellular functions for this ubiquitous class of topoisomerases. Even though the interaction between topoisomerase IIIβ and mRNA in vivo has been linked to synaptic functions [23,24,25], there is no direct experimental evidence so far for a change in cellular RNA topology catalyzed by RNA topoisomerase activity. Separation of function mutations or inhibitors that can be identified for topoisomerase IIIβ would be valuable research tools for investigating the cellular activity and function of topoisomerase IIIβ. 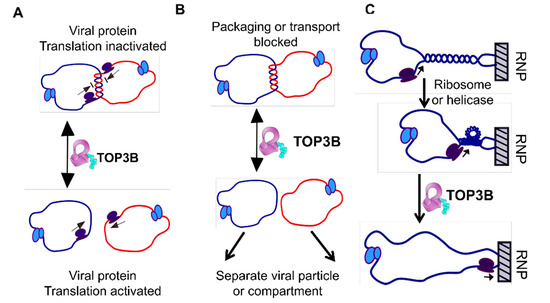 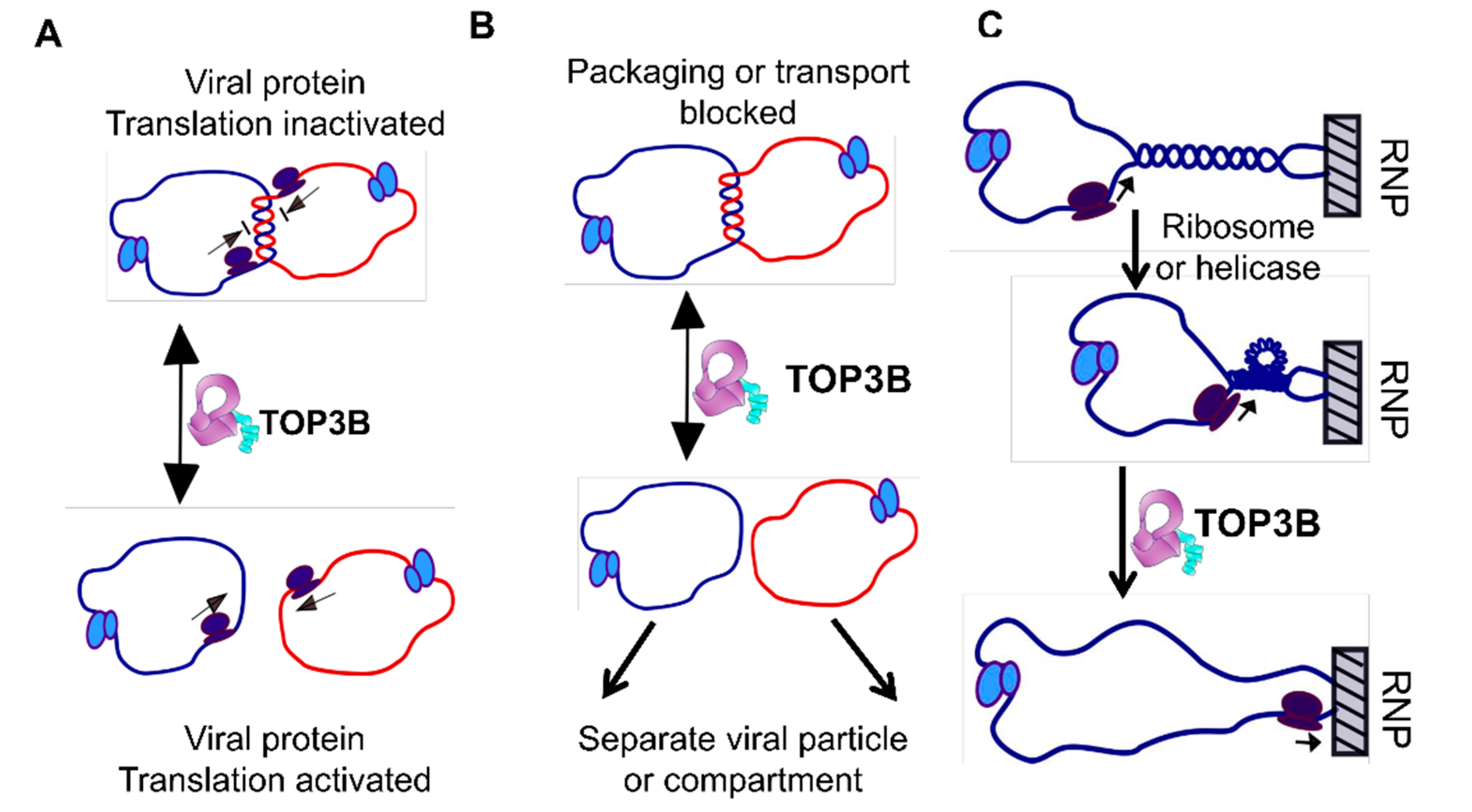