Design of Disruptors of the Hsp90–Cdc37 Interface

The molecular chaperone Hsp90 is a ubiquitous ATPase-directed protein responsible for the activation and structural stabilization of a large clientele of proteins. As such, Hsp90 has emerged as a suitable candidate for the treatment of a diverse set of diseases, such as cancer and neurodegeneration. The inhibition of the chaperone through ATP-competitive inhibitors, however, was shown to lead to undesirable side effects. One strategy to alleviate this problem is the development of molecules that are able to disrupt specific protein–protein interactions, thus modulating the activity of Hsp90 only in the particular cellular pathway that needs to be targeted. Here, we exploit novel computational and theoretical approaches to design a set of peptides that are able to bind Hsp90 and compete for its interaction with the co-chaperone Cdc37, which is found to be responsible for the promotion of cancer cell proliferation. In spite of their capability to disrupt the Hsp90–Cdc37 interaction, no important cytotoxicity was observed in human cancer cells exposed to designed compounds. These findings imply the need for further optimization of the compounds, which may lead to new ways of interfering with the Hsp90 mechanisms that are important for tumour growth. View Full-Text
Keywords: Hsp90; cdc37; protein–protein interaction; peptide design Hsp90; cdc37; protein–protein interaction; peptide design
►▼ Show Figures 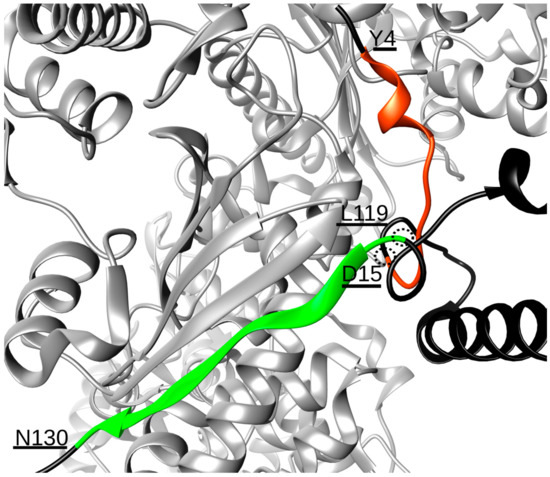