Article
The Generation of the Oxidant Agent of a Mononuclear Nonheme Fe(II) Biomimetic Complex by Oxidative Decarboxylation. A DFT Investigation
by

In recent years, the employment of biomimetic catalysts considerably increased not only for their related high selectivity, but because they are allowed to operate in very mild conditions and they adapt to different types of substrates [1,2].
Encouraged by the new reactions catalyzed by Rieske dioxygenases [1,3,4], sustainable mononuclear nonheme iron complexes have been proposed for bioinspired oxidation catalysis. Dioxygenases are involved in the degradation of a wide range of natural and synthetic compounds by incorporating both atoms of O2 into substrates.
Bioinspired catalysis using peroxides or peracids for the oxidation of hydrocarbon substrates is more common and better characterized, than that based on dioxygen in catalytic oxidations, which has not been fully explored yet and the relative reaction mechanism is often unknown. This last reaction path requires both electron and proton sources [5,6,7,8,9,10,11,12,13] and cosubstrate-assisted O2 molecular activation by transition metal containing complexes can be an alternative pathway [14,15,16,17,18,19] resorting to the sacrificial reductants represented a good solution [12,20]. Paine’s and other groups have investigated a family of iron complexes supported by the monoanionic facial trinitrogen donor ligand, hydrotris(3,5-diphenylpyrazole-1-yl)borate (TpPh2 ligand) that activates O2 by 2 electrons reduction in the oxidative decarboxylation of the α-hydroxy acids as sacrificial reductants [3,21,22,23]. These studies provide evidence that the the hydroxyl group in the dioxygen activation is important. The iron complexes mentioned above reacting with O2 are able to carry out the stoichiometric cis-dihydroxylation of olefins producing the diol product [3], as in that with H2O2 [4,24,25]. The mononuclear non-heme iron(II) complex shown in Scheme 1, the object of the present investigation, represents the first biomimetic complex reproducing the dioxygenase activity of α-ketoglutarate-dependent enzymes.
Since, as occurred in similar systems [26] no intermediate was detected in the course of the reaction, the steps up to the oxidative decarboxylation of the keto acid play a key role in the control of the rate of the reaction.
To provide deeper insights on the reaction catalyzed by the biomimetic complex of Scheme 1, we have undertaken a theoretical investigation taking into account the spin state of the analyzed species and building up the potential energy surfaces for the reaction path leading to the formation of an iron−oxygen oxidant upon oxidative decarboxylation of α-hydroxy acid.

On the basis of our density functional theory investigation on the oxidative decarboxylation promoted by a biomimetic nonheme complex, the following conclusions can be drawn:

All density functional theory (DFT) based calculations have been performed by using Gaussian09 code [30]. Following previous suggestions available in literature about the reliable results of the M06L [31,32] exchange-correlation functional in describing electronic structure and properties of metal containing systems also in various spin states [33,34,35,36], this functional has been adopted for the geometry optimizations.
The crystal structure (X ray) of the biomimetic catalyst [3] has been adopted as starting structure for our computations. In order to reduce the computational time, five phenyl rings of the TpPh2 ligand have been replaced by methyl groups (see a of Figure S1). The phenyl group of the TpPh2 ligand closely oriented to the iron center has been retained to better evaluate its role on the activated dioxygen species during the catalytic process.
Geometry optimizations and vibrational frequencies have been performed employing differentiated basis set. In particular, for O, N and H atoms in the active center the 6-31+G(d,p) set has been used while for the remaining ones the 6-31G(d,p) one has been chosen. The LANL2DZ effective core potential and the related basis set has been employed for iron.
In order to improve the energetic values, single point calculations with the larger basis set 6-311+G(d,p) for all atoms except for metal ion, has been performed on all the previously optimized structures. The solvent corrections were evaluated using the polarizable continuum model [37,38] as implemented in Gaussian09 taking into account the dielectric constant (ε = 24.93) that better reproduces the polarity of the solvents mixture used in the experimental work [3].
Owing to the unrestricted formalism of all calculations, the spin contamination and its effect on the calculated energetics was monitored as done for similar systems [35,39] and the <S2> values are collected in Supplementary Information section (Table S1).

Supplementary materials can be found online.

The University of Calabria is gratefully acknowledged. 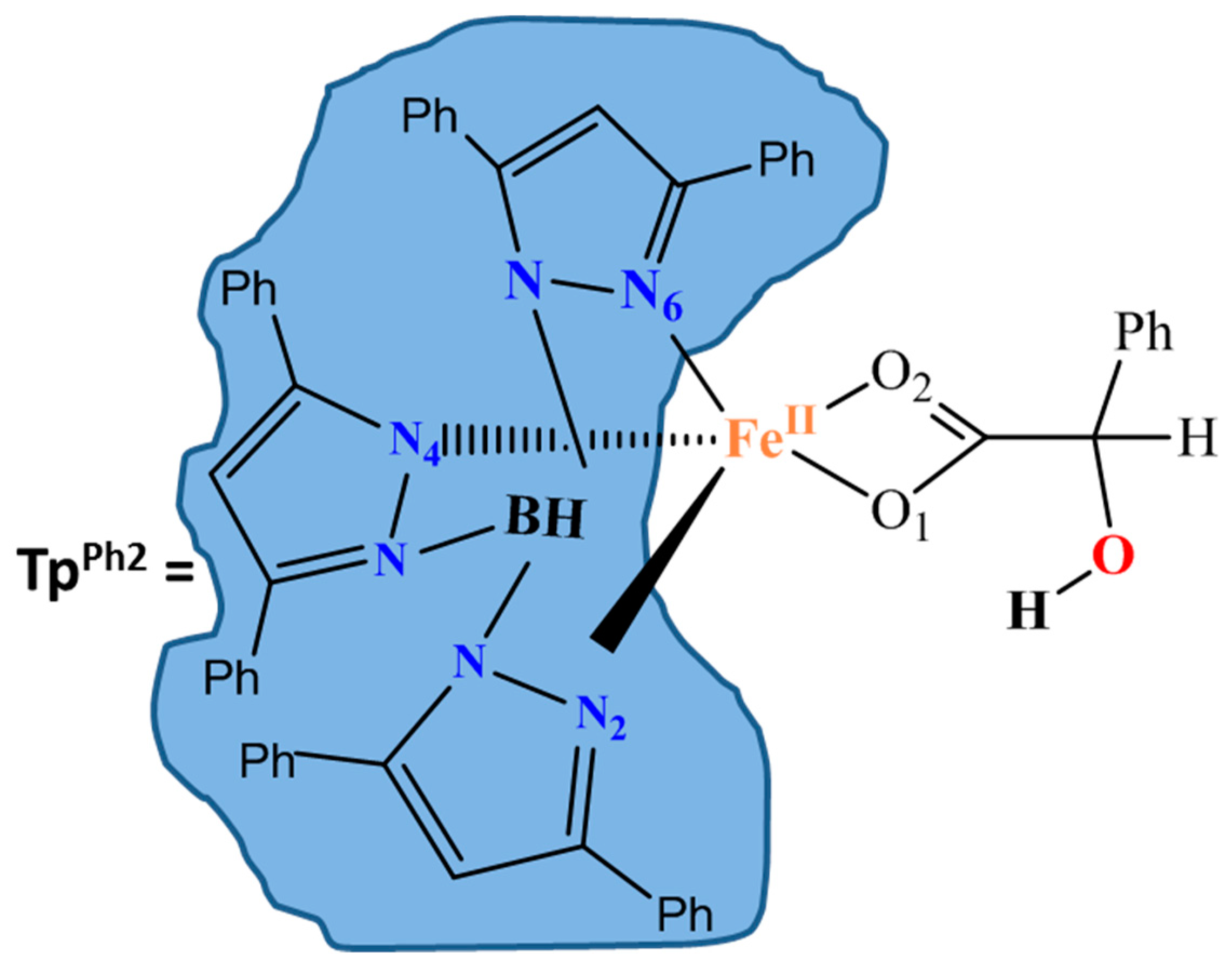 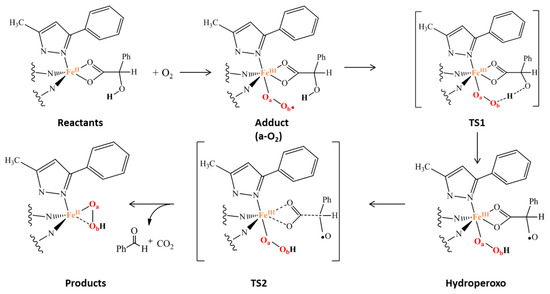 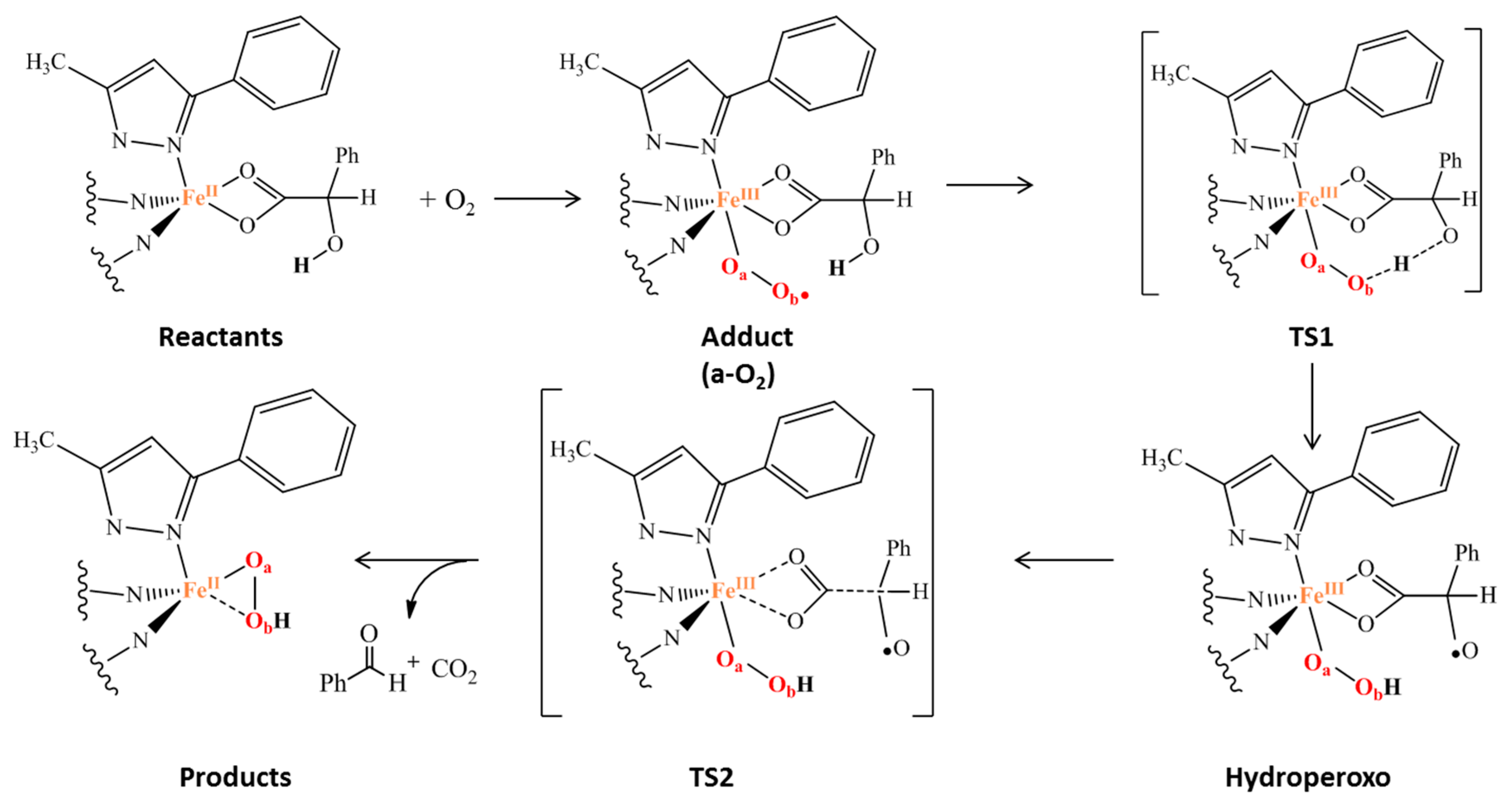 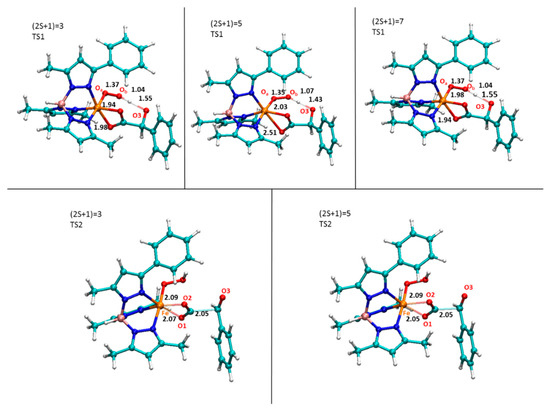 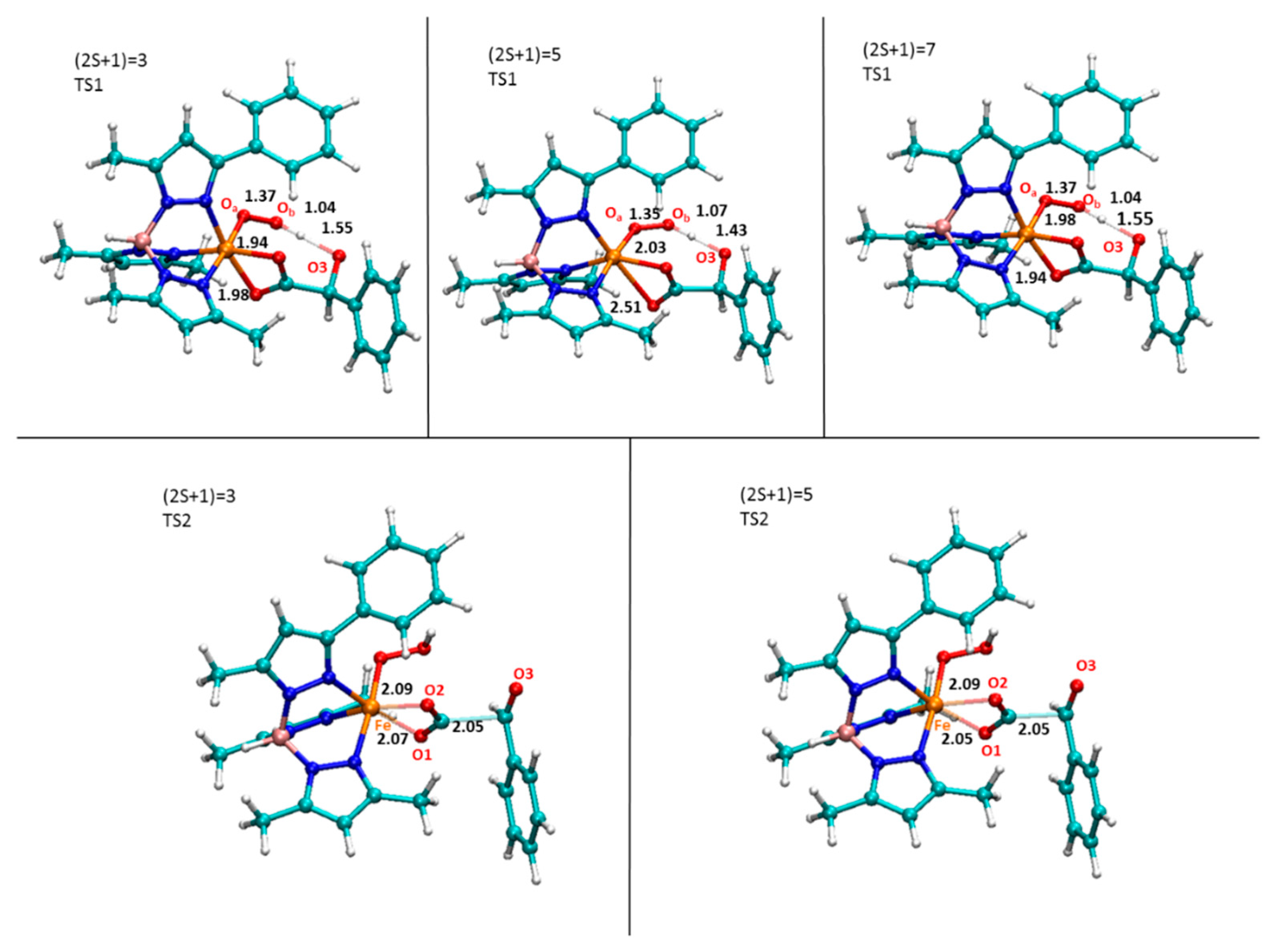