The Emulsifying Properties of Hydrogenated Rosin Xylitol Ester as a Biomass Surfactant for Food: Effect of pH and Salts

The xylitol ester of hydrogenated rosin (XEHR) was obtained for the first time from biomass-based hydrogenated rosin and xylitol using an environmentally friendly, high-pressure CO2 catalytic synthesis. This compound is intended for use as an emulsifier for food. Analyses by ICP-AES showed the absence of heavy metal residues in the product, such that it met food standards. Fourier transform infrared and nuclear magnetic resonance spectroscopies together with gel permeation chromatography confirmed the successful esterification and the formation of a monoester and diester with molar masses of 427 and 772 g/mol. The emulsification of water/soybean oil mixtures by adding the XEHR was assessed at pH values of 4, 6.86, and 10 and in the presence of NaCl, KCl, MgCl2, and CaCl2. The XEHR was found to act as an emulsifier by reducing the interfacial tension of such mixtures to less than 2 mN/m under all conditions. The highest emulsifying activity index (9.52 m2/g) and emulsifying stability index (94.53%) were obtained after adding MgCl2 (100 mM). Particle size and confocal microscopy showed that the presence of salts gave a more uniform droplet size and a finer emulsion structure. The high viscosities of the emulsions containing salts also suggested a more cohesive oil droplet network. View Full-Text
Keywords: xylitol ester of hydrogenated rosin; emulsifying properties; water-in-oil emulsions; pH; salts xylitol ester of hydrogenated rosin; emulsifying properties; water-in-oil emulsions; pH; salts
►▼ Show Figures 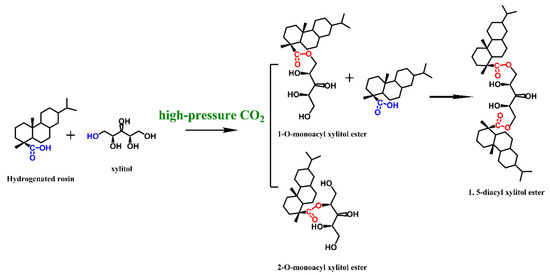